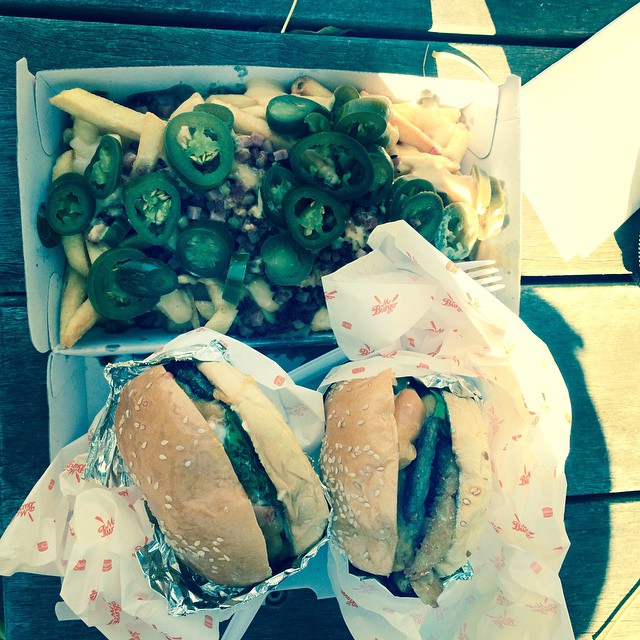 One thing that every traveller seems to have to say about Australia is that it is expensive.

To some extent this is true. But there are many ways in which you can save money whilst travelling in Australia.

A lot of this expense will be food, especially for those like me that enjoy eating out while travelling rather than cooking in a hostel kitchen.

In Melbourne, there are many meals that you can pick up for less than $10. Whilst it’s true that an average meal in a pub or an average brunch will cost you around $20, many don’t look further to the amazing ethnic and oriental meals in Melbourne that come in at a budget price.

So here are my picks:

Sushi is basically a Melbourne staple. You’ll find a small sushi bar or café on almost any corner of the CBD.

Sushi hand rolls average around $2.5 and with most people not needing more than 3 for a filling and satisfying lunch or dinner, you can easily eat for under $10.

My favourite fillings are the salmon and avocado and the seaweed salad ones.

Just follow the crowd. Chances are if there is a long line of locals waiting to order some sushi then you are in the right place.

I’m not a huge fan of the processed doner shit but I love some good old fashioned Gyros. You’ll be hard pressed to spend more than $10 on one of these.

Even at some of the nicer places like Hanoi Hannah, a big bowl of Beef Pho won’t cost more than $10 a bowl.

Given the strong Vietnamese community in Melbourne you won’t have to look hard to find the best Pho outside of Hanoi and Ho Chi Minh.

My favourites are Hanoi Hannah, I Love Pho and the Proud Peacock.

There are many yummy burgers to be had in Melbourne. Whilst more lavish burgers will cost up to $15 if you are on a budget you can easily pick up a burger for $10.

Huxtaburger, Grill’d, Beer and Burger Bar, Mr Burger and Tuckshop Takeaway all have burgers on their menu for under $10.

If you also aren’t quite feeling like a burger, Beer and Burger Bar, Huxtaburger and Mr Burger all have loaded fries that are super feeling but won’t set you back more than $10. In particular I’d recommend the chilli fries from Beer and Burger Bar for $10.

Dumplings are one of my favourite meals in Melbourne. Head anywhere in Chinatown and you’ll easily find a plate of 15 dumplings for less than $10.

If you are willing to travel a little bit further out of the city I’d definitely recommend heading to Ping’s Dumplings. Ping’s no frills dumplings are super filling and a huge plate of dumplings won’t ever cost more than $9.

A plate of Xiao Long Bao will set you back $7.90 at New Shanghai, but they are so delicious you’ll probably have to order multiple plates!

Whilst there are many upmarket Mexican places in Melbourne, there are equally lots of cheapies as well.

Head to any of the Salsas or Mad Mex stores to grab a burrito, tacos or nachos for under $10.

If you go to Salsas on a Tuesday you can also get $2 tacos for their Taco Tuesday special.

My favourite Laksa in Melbourne, at Laksa King, will cost you just over $10, with a combination bowl coming in at $10.80. It’s seriously enormous though and you definitely won’t need anything else!

You’ll also find many of the Asian cafes around the CBD offering Laksa for less than $10.

This popular Vietnamese sandwich is becoming more and more popular in Melbourne.

In suburbs like Fitzroy or Victoria St in Richmond you can pick one of these up for $5.

But I’d recommend heading to newly Ba’get on Russell St where you’ll pick up some of the best Banh Mi in the city for $7.90.

You also can’t go wrong with the pork belly Banh Mi from chain store Roll’d, which you’ll find all over Melbourne and the CBD.

For only $4 you’ll also have some cash left over for a beer!

In my world, ice-cream is definitely an acceptable substitute for lunch or dinner.

You’ll find the best ice-cream in the city at Gelato Messina, located in both Fitzroy and in Richmond.

I’d recommend living dangerously and ordering 3 scoops for $8.90. My favourite flavours are chocolate peanut butter fudge, banana split and almost anything off their specials menu.

Have you found a meal in Melbourne for less than $10?