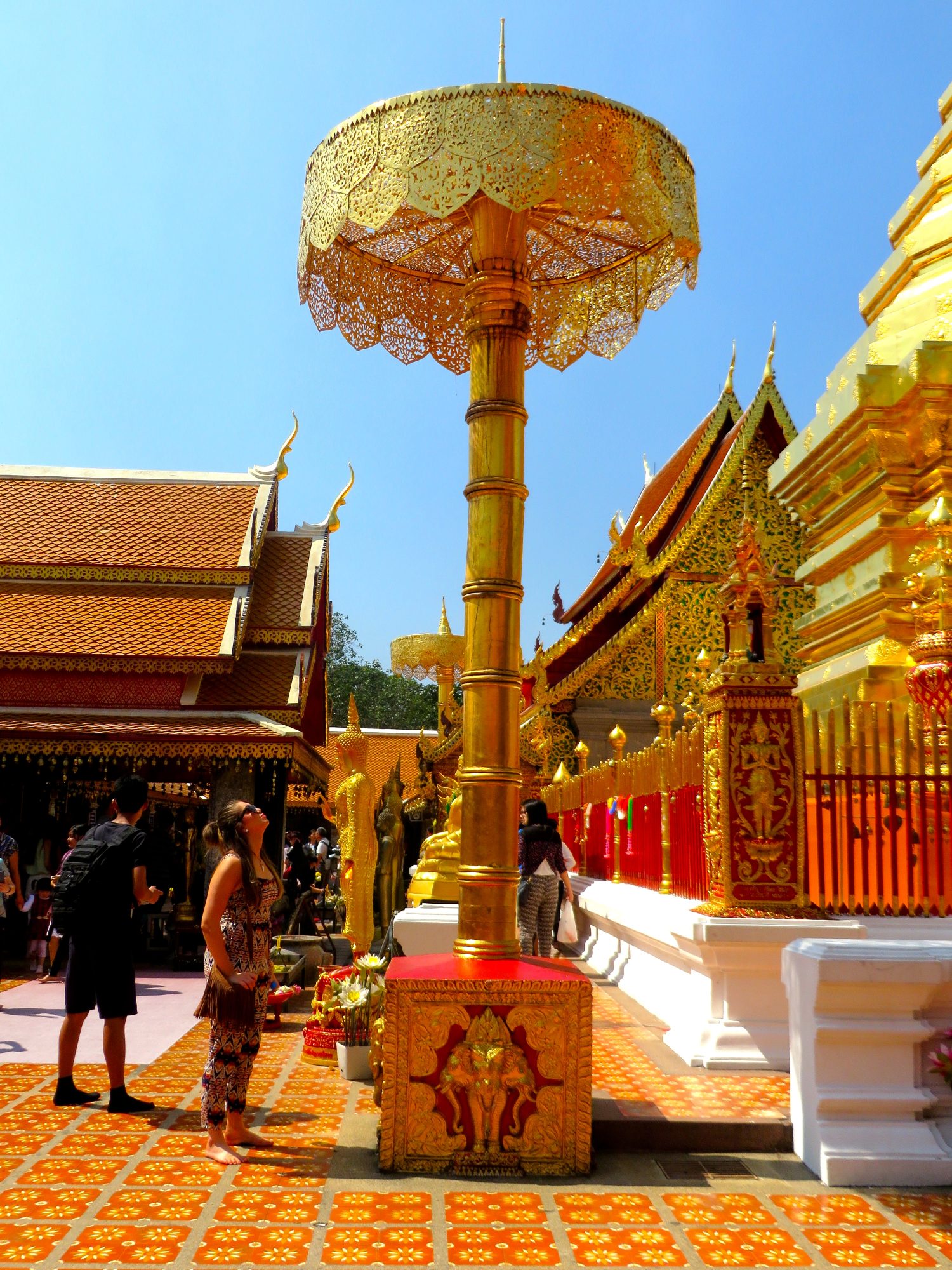 Tourists, especially Australian tourists don’t venture far from the beaches and islands of Southern Thailand and thus often never make it to Chiang Mai. However this city was one of the highlights of our trip to Thailand and I would definitely recommend it to everyone.

Given you now have Airasia Thailand offering cheap flights from/to here you really don’t have excuse not to venture up north for a visit. So here are some reasons why you should visit!

Out of all of the places we visited in Thailand I would say that Chiang Mai is the most reflective of true Thai culture.

You’ll often find yourself sharing a songthaew (its like a big shared tuk tuk in the back of a red truck) with the locals who are always friendly and smiling.

The street food and street stalls are also more authentic than some of the street stalls in Bangkok that are clearly geared towards tourists. Taking a cooking class here was also a great way to learn more about thai culture. It feels like just by going to Chiang Mai you are getting off the beaten path.

Before leaving multiple people had told me that it was smartest to save our shopping pennies for Chiang Mai as it offered the best and cheapest shopping in Thailand.

They weren’t wrong- both my sister and I did a heap of shopping in Chiang Mai.

The Saturday and Sunday walking markets are great for authentic Thai products whereas if you are looking for cheap knockoffs then you should head to the Night Bazaar which happens every night of the week.

We went there on the Sunday after the walking market which was such a good idea because it was quiet given that everyone was at the Sunday market.

Chiang Mai is a city known for its beautiful temples and it didn’t disappoint.

After Ayutthaya we were feeling pretty templed out but we did spend one of our days in Chiang Mai visiting two of Chiang Mai’s most famous temples- Doi Suthep and Wat Chedi Luang. Doi Suthep was definitely the highlight for me.

It’s located just outside of Chiang Mai on a mountaintop.

We hired a red truck for two hours for about 600 baht and the driver drove us up the mountain and waited while we went exploring.

Don’t ride the lift up to the top- what makes this place spectacular isn’t just the temple itself but the walk up it via the beautiful staircase.

Wat Chedi Luang is also considered the number one attraction in Chiang Mai on trip advisor for a reason. I loved the contrast of the old unused temple which was located behind the new temple where people go to pray daily.

4. To chat with the monks

Maddy has a bit of a monk obsession. She thinks they are super cute so she was super excited to see a chat with the monks session at Wat Chedi Luang.

You can sit down with them and ask them any questions about their life as a monk and Buddhism in general. The two we spoke to were both actually studying education and English which we didn’t expect and it was a great way for them to practice their English as well. We learnt so much from them.

5. For the Fruit and Fruit Shakes

While a staple of our diet the whole time we were in Thailand, the fruit shakes and fruit bowls in Chiang Mai were definitely the best and the cheapest we had.

6. To explore some amazing jungle and rainforest

We explored the rainforest by ziplining which was a great way to see the forest. However you can explore the forest of Chiang Mai in a variety of ways- from trekking, to homestays, to canoeing and white water rafting. There is definitely lots on offer for the adrenaline junky.

7. To interact with the Elephants

Unfortunately many tourists flock to Chiang Mai to ride elephants in the nearby elephant camps. While slightly better than the ones in cities because at least the elephant is getting a bit more room to run around in- you should never get on an elephants back as it will always hurt it.

A trip to Chiang Mai wouldn’t be complete without a visit to the Elephant Nature Park where you can bathe, feed and observe the elephants in a natural, non-exploitative way.

Chiang Mai has lots of dining options on offer. I got pretty sick during our stay in Chiang Mai so had to turn to western food for a couple of days but even in this area Chiang Mai did not disappoint.

I had the best pizza I’ve had outside of Italy in a little pizza café near our hotel.

In terms of traditional Thai food there are many street vendors and also authentic restaurants offering some delicious dishes, the most famous of which is Khao Soi.

9. To partake in a traditional Kantoke dinner

Maddy and I booked a night at the Chiang Mai Cultural Centre where we ate dinner cross-legged on the floor while watching the traditional thai dances.

While a bit touristy it’s actually quite reflective of the ancient practices of eating a communal meal and observing music and dance.

The first part of the evening was great but the second half in which we observed some hill tribe dances was pretty awful- the dances obviously had no interest at being there at that point. I still think it’s worth doing.

Chiang Mai just has a very cool vibe in general. While not having a beach in sight there just seems to be a slow pace to the whole city- well as slow as you can get in Asia. The humidity is also less brutal up here so it’s a lot easier to just walk around the city and soak up the atmosphere without getting heatstroke.

Chiang Mai was my second favourite place in Thailand, falling slightly behind Koh Lanta and is definitely a place I will return to in the future.

Have you been? Did you love it as much as I did?

Qantas Frequent Flyer Program: How to Earn Points Without Credit

Seoul: Why You’ll Never Run Out of Things to Do