My 5 Day Love Affair with Slovenia: Day 2- A Hike in the Rain to Vintgar Gorge 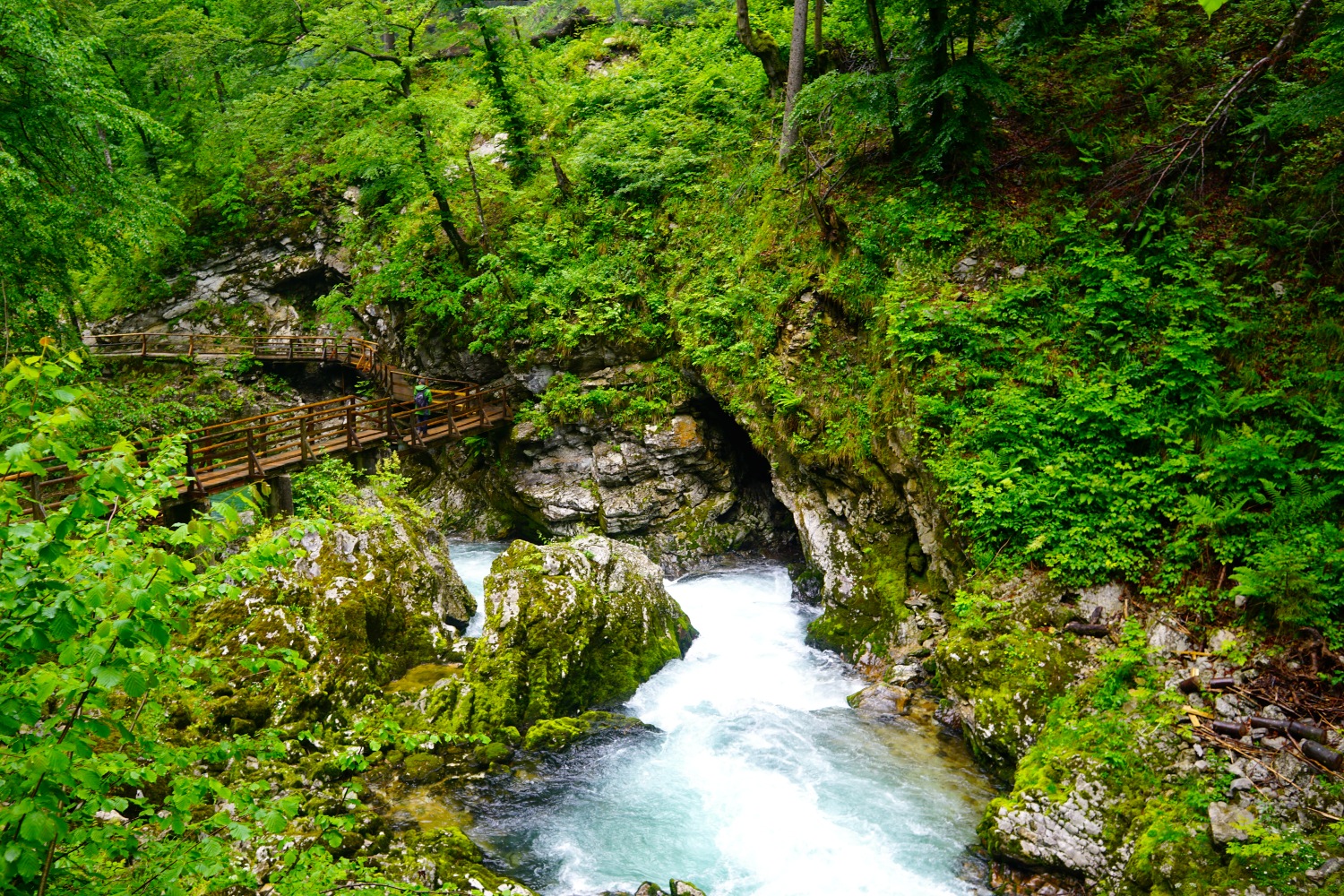 I had big plans for my second day in Slovenia. I expected to dedicate the whole day to exploring Bled, the town in which I’ve decided to base myself in for my time in Slovenia.

I was going to hire a bike and cycle around the lake, I was going to stop and climb up a mountain to get the best views and pictures over the lake. I might even have had a lazy afternoon swim in the lake, or hired a boat and rowed my way to the little island.

Unfortunately all my plans flew out the window when I woke up to find it was raining. And that rain didn’t look like stopping all day, at least according to the weather forecast and the clouds overhead.

I find it ironic that I spent four months travelling Europe in the winter and had only experienced a handful of rainy days with a couple of showers. But here I was in late May, just on the cusp of summer and I was facing five straight days of rain in Slovenia.

I’m usually not the kind of person that cares a lot about the weather. I’ll throw on a raincoat and go out in rain, hail or shine. But unfortunately the mountain I wanted to walk up was slippery ad I really didn’t want to risk hurting myself by walking up it. Similarly, riding a bike in the rain isn’t an easy feat, at least for me.

I’d mostly given up on seeing anything at all on my second day in Slovenia, even going as far as buying a notebook so I could spend the day instead working on my take home exam from my study abroad program.

But then I was convinced by a group of people from the hostel to join them on a ‘leisurely’ walk in the rain to Vintgar Gorge.

Vintgar Gorge is a natural gorge located just 4km from Lake Bled. So it was a fair hike to get there by foot, especially as we were slowed by the relentless downpour. I’m sure it would have been a great walk in nicer weather, especially because of all the Alpine scenery (like cows!!). But we missed most of this as we kept our heads down and tried not to get saturated.

Luckily the rain stopped almost immediately before we finally arrived in the gorge which meant we got to explore it without worrying about hiding from the rain. I ended up visiting the Vintgar Gorge again before the end of my stay, the second time in much better weather, but I actually really liked the gorge after a downpour.

All of the colours of the gorge were especially vibrant in the glisten and light of the rain. The blue of the water, the white of the rapids as the river crossed the rocks and the green of the beautiful trees and shrubbery surrounding the gorge were all brighter because of the downpour. It made me feel a bit more satisfied with the fact that I was drenched from the 4km walk there.

Moreover the rain and the fog and mist that followed it gave the gorge a very magical feel. I thought I’d stumbled onto the territory of the local fairies or some other mythical creature. It wouldn’t have felt out of place in a fantasy film!

The gorge itself is just over 1km long, and it was slippery so we took our time walking through, exploring and stopping to take epic pictures.

Once again, I was in awe of the incredible natural beauty of Slovenia. I think it’s one of the reasons it is still one of my favourite countries- after months of visiting cities and old towns, I loved getting out and actually experiencing sites made by the environment rather than sites made by human impact.

After we got to the end of the gorge, someone had the bright idea to go home via different route- this one through the forest rather than along the road. After hours of rain, said rainforest and trail was essentially just a mud pit. I was thankful for my hiking boots, one of my friends had vans on and her feet were looking a little worse for wear.

But by taking the other way back to Bled we got to see something different, including possible one of the cutest cows I’ve ever seen, a little village and a rainbow!

After we finally returned to the hostel there was nothing much else to do but take a warm shower to defrost and spend the rest of the day watching Netflix in the common area. Sometimes you’ve got to admit defeat when it comes to the weather!

I’m disappointed that I didn’t get to spend more time visiting Bled, I’m still wishing for that bike ride and that afternoon swim. But I’ve no doubt I’ll be returning to Slovenia, hopefully at a time of the year where the weather is reliable.

Most likely I’ll visit in the height of the summer and still be faced with endless days of rain!

Stay tuned for Day 3 of my Slovenian adventure in which I explored the Skocjan Caves and Piran!