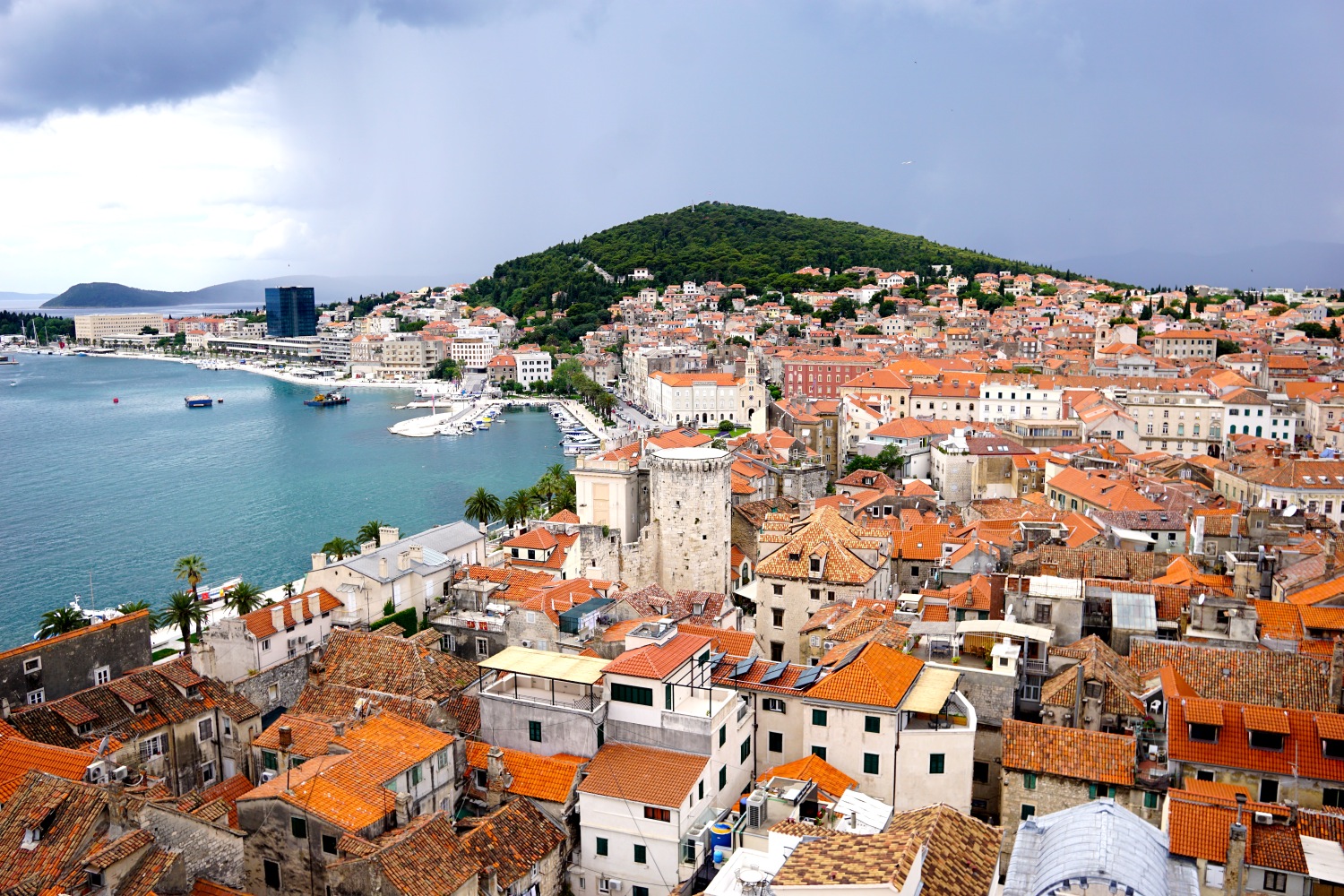 Split will always be the town where I almost got killed by a bunch of Croatian men. Well that might be slight exaggeration.

I did end up in a van with a bunch of Croatian men blind drunk at 2am in the morning. It was incredibly stupid and a lesson learned not to put myself into that position again.

But regardless of that horrible memory of Split, I still absolutely loved the city. Dubrovnik might get all of the attention, but I found the old town of Split equally beautiful.

I arrived in Split with no plans for visiting the city. I thought about hopping on a free or even paid walking tour of the old city, but then decided I’d much rather do things on my own.

It’s the kind of approach I’ve taken in an old city before, and it’s the perfect way to experience Croatia or really any of the towns along the Mediterrean. It’s part of the culture, the history and the life of the city to spend lazy afternoons out in the sun with a coffee and someone to talk to. It’s meant to be enjoyed slowly.

It’s also a perfect approach for Split in particular, as everything is so easy to find. The whole old town is located inside the walls of the old Diocletian Palace. This UNESCO listed area was erected in the fourth century AD where it sat as a palace, open only to those in favour with Roman Emperor Diocletian.

Today, the palace is open to all and actually forms the city centre of Split. Many of the shops, cafes, restaurants, bars and even museums are located within the four walls of the old palace. It’s very different to what it once was.

But one-way to get a glimpse of what the palace used to look and feel like is to explore the basements of the Diocletian palace. It’s a small fee to enter the underground cavern where I found the original foundations from the fourth century.

It was also the place where I surprisingly learnt the most about the city of Split and the palace itself. It was odd standing in the damp and dark space of the basements while reading informative boards and watching videos like I was in a museum.

As we have already established that I was doing a ‘lazy’ exploration of Split, I needed to have a short break before I moved on to visiting another one of the city sites. So instead of heading straight to the next destination, I sat down in the square just in front of the cathedral and people watched.

My laziness and observations were rewarded when I saw a hilarious encounter between one of the men paid by the city to dress like an old guard, and a young tourist.

He was using his sexy guard uniform to chat her up, and I caught an awesome line. ‘Maybe after I’m finished here, me and you can go do something’. I wasn’t the only one overhearing, and I shared a giggle with the British couple sitting next to me. Oh the joys of people watching. And Croatian men!

After my successful people watching break, I decided to be the exact opposite of lazy and climb up to the bell tower in the centre of town. As you all probably know my now, I’m someone that is not too great at exercise. And that includes walking up lots of stairs to the highest point of a city.

But I always seem to find myself huffing and puffing up to the top of a bell tower for one big reason; awesome photo opportunities. The effort of climbing up is almost always worth it for the view. And Split was no exception. My favourite photo of the day was taken from the top of the bell tower.

I got a combination entrance fee that included the bell tower of the cathedral, the cathedral itself and its crypts. The cathedral was a bit of a let down from the inside, half of it was closed off for repairs and after seeing the inside of so many cathedrals during my trip, it takes a lot to wow me. The crypt was similarly disappointing.

I managed to get down the bell tower just before the rain set in for the day. The story of my whole time in Croatia thus far had been me dodging rainy weather, not something I had expected from a “sunny” destination like Croatia.

Alas there was only one thing left to do; head back to the hostel to hang out with everyone and open some beers. I stayed at Split Guesthouse, one of the best hostels I’ve stayed in during my whole trip. It old had the capacity for fourteen beds, which meant that we all hung out and went out together.

Josko, the owner, met me despite my late arrival and spent ages marking things on the map for me to do, including places to drink and places to eat. His mother, affectionately known as ‘grandma’ cooks breakfast every morning of crepes, omelettes and eggs for about €2 and on my last night in Split he cooked a free ‘family dinner’ for everyone at the hostel.

We bought the beer, and he cooked all of us chicken stirfry with pasta which was seriously delicious. It was an awesome bonding experience!

In fact I would say the hostel experience was my favourite part of my visit to Split.

Split is a great city to hang out in, but during my travels in Croatia I talked to many people that regretted the amount of time they allocated to the city. Two days is more than enough to experience this city, especially its awesome nightlife.

But if you are looking for more of a beachy destination to chill out in, I’d definitely recommend heading across to the islands such as Hvar for that. Split has a beach, but it definitely isn’t the highlight of the city.