A Day Trip from Mexico City to Teotihuacan, My Favourite Mesoamerican Pyramids 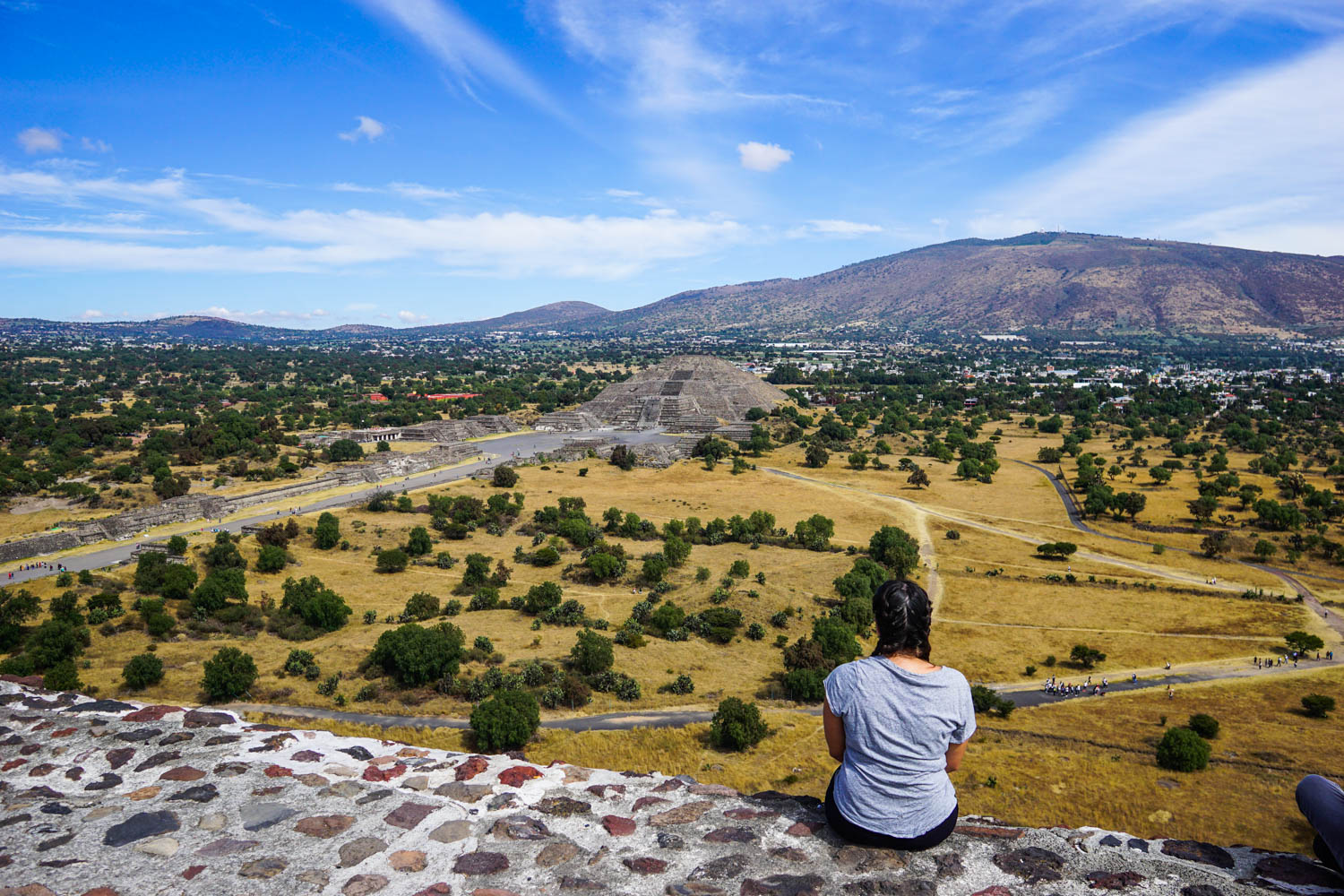 The guided day trip is king in Mexico. The hordes of mostly North Americas arriving in the country, often on their very first holiday, means that there is a huge market for organised tours. It doesn’t matter what tourist site you hit- you are bound to run into huge amounts of buses with people being ferried around sites in large groups.

Teotihuacan is no exception. But just like most of the other tourist places I visited in Mexico- a tour isn’t necessary. Not only is it not necessary but I’d recommend trying to arrive on your own not just to save money, but more importantly to arrive early and avoid the crowds.

Whilst Chichen Itza gets all the fame as the one of the 7New Wonders of the World, Teotihuacan was my favourite of the Mayan and Aztec ruins that I visited in Central America. It’s overwhelming size and the fact that so much of it is left so well preserved made it ridiculously spectacular for me.

This site is just another reason to not skip Mexico City!

Hopping on a bus to Teotihuacan is incredibly simple and easy. Buses leave the Terminal de Norte (North Bus Station) every half an hour. To arrive at the North bus station from where you are staying in Mexico City you simply need to hop on the metro and get off at Autobuses del Norte Metro (Line 5). It’s important for me to note that the bus does make another stop once it leaves at Potrero Metro Station on Line 3 which might be more convenient for you. But I wouldn’t recommend getting on here because the bus will arrive full and you won’t get a seat and it will be confusing to both purchase your tickets and hop on the right bus. There is a lot more assistance for Gringos at the main bus station!

Alternatively, if you are running late like us and feeling just a little lazy, it isn’t expensive to hop in an Uber or an Uber Pool to the bus station.

Buses leave from Gate 8 of the Bus station. And that is also where you can buy your tickets for the bus. Look for the ticket booths labelled “Zona Arquelogico” or “Pyramides”. The return ticket shouldn’t cost you anymore than 100 pesos ($5 USD). Expect for the bus ride to the site to take about an hour, depending on traffic. Don’t be scared that you’ll miss your stop. The bus will be full of people heading the same way and the bus driver will yell at you to get off when its time.

As mentioned before the best course of action is to arrive early, before the guided bus tours can descend on the site. This was especially important for us as we made the mistake of visiting on a Sunday. On a Sunday, Mexican citizens get in for free, so the site is always at its busiest on this day. Luckily the end of day light savings was on our side and not realising that the time had changed, we arrived at around 9am!

You’ll pay 70 pesos for an entrance fee. We decided to not hire a guide this time because the site was so huge and I really wanted to explore it on my own time.

What Not to Miss at Teotihuacan

The biggest and most exciting building in the Teotihuacan complex is the Temple of the Sun. This huge pyramid/temple dates back to 200CE and unlike the main temple at Chichen Itza, you can climb this one. The view from the top is incredible! You can see not just the whole site but the valley and landscape beyond the site. If you get lucky like us with a sunny, clear day then it is stunning!

No matter where you enter the complex, you want to start with the Temple of the Sun. If you have taken my advice and arrived early then it makes the most sense to climb the temple first before it overflows with other tourists. It’s a lot of hard work to get to the top, especially because you are at altitude, but 100% worth it. Just do what I did and take regular breaks!

Another spot that can’t be missed is the Palace of Quetzlpapalotl (roughly translated to the Temple of the Feathered Serpent). They control the amount of people that enter the palace because it is one of the best-preserved spots in all of Teotihuacan. When looking at the almost 2000-year-old ruins it’s hard to imagine that they were once vibrantly painted and not just the black stone we see today. The preserved and beautifully painted murals and walls inside the palace give some indication on how intricate and amazing these paintings might have been.

Teotihuacan is a huge site, with lots of small temples and ruins to climb all over and under. We didn’t feel the need to see absolutely everything because many of the more standard buildings were built in the same style. So, if you have seen one of them then you have seen most of them. I’d still say we were able to explore more than 90% of the site.

Getting back to Mexico City

The only downside to us doing our Teotihuacan adventure on our own was that we waited ages for a bus heading back towards Mexico City. So many buses came past that were heading in the other direction. But after a little bit of sunburn and a lot of dehydration we found ourselves heading back to Mexico City. The drive takes you past some of the favela type areas of Mexico City, with colourful shanty towns. It’s a pretty impressive view from the bus although I’m not sure I’d be ethically ok with hopping on one of the glass cable cars that allow you to get a closer glimpse of these heavily impoverished areas.