Attending the ANZAC Day Dawn Service at Villers-Brettoneux and Amiens 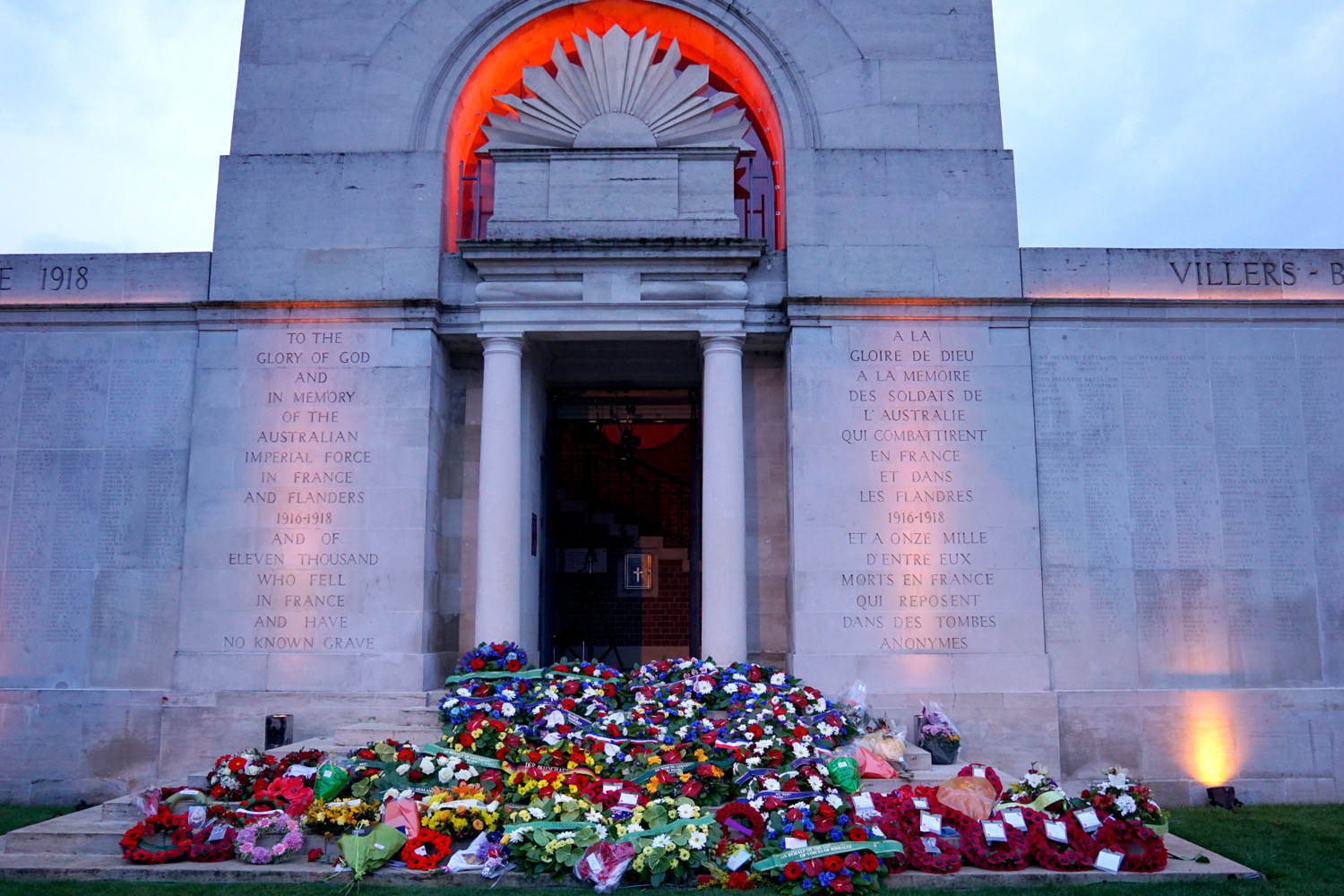 Attending the ANZAC Day dawn service at the Australian War Memorial at Villers-Brettoneux has been on my list for a while. Last year, as I watched the same dawn service be live streamed on television in Australia, I told myself that next year I would go. Being on exchange in Florence seemed like the perfect opportunity to travel to France for the weekend to commemorate this special day.

For the non-Aussies reading, let me fill you in on what Anzac Day is all about. Anzac Day is Australia’s equivalent of Veterans Day. On Anzac Day we commemorate those who have served; past and present. It occurs every year on the 25th of April, the day thousands of Australian soldiers landed on Gallipoli during World War I (where many of them would die).

The day is a National Holiday and the bulk of commemorations centre around the dawn service. At war memorials throughout the country, everyone gathers at dawn to lay wreaths, give well wishes and to remember. I’ve attended the Melbourne service for many years and it is always very special.

Of course Anzac Day isn’t without its critics. Some argue that it is a day where we glorify war. But the services I’ve always attended have been more about paying respect for those who served. I don’t think anyone can attend a dawn service and think that any war is something we want to repeat.

By now you probably realise I’m a bit of a history buff. And ever since high school, the history that has most interested me has been the history of the world wars. My book shelf is full of non-fiction works on this topic. I’d particularly recommend Les Carlyon‘s the Great War. It’s a thousand harrowing pages and I was so engrossed in this part of history that I read it at fifteen.

My interest only grew when I spent three months in Caen, a city that was virtually levelled by the war. Here I visited the D-Day beaches, an incredible museum on the French occupation and a local museum about rebuilding the area. Hence if I was going to attend a dawn service overseas, I wanted it to to be on the Western Front.

Villers-Brettoneux is actually a really small town. The amounts of hotels are very limited. Hence visitors to the Australian War Memorial usually base themselves in the nearby city of Amiens. I arrived the night before the Dawn Service on the train from Paris .

Unfortunately Amiens isn’t home to any hostels, so I did have to spend a little bit on a hotel. The cheapest was Hotel Anzac. It was covered in Australian flags and packed full of Australians. Even outside of the Anzac Day commemorations, thousands of Aussies travel to Amiens every year to visit the war memorial.

Even now, there is a lot of respect shown by the locals for Australians making the pilgrimage to the Australian War Memorial. The Australian diggers (a term used for Australian soldiers) played an important role in assisting the French people of the region during the war. So much so that local schools, local veterans groups and local communities still do their own part to commemorate Anzac Day.

Getting to the Dawn Service

Given the dawn service officially kicks off at around 5am, you don’t have much hope of getting a local bus or train to the memorial for the service. Instead the local tourism office, along with the Australia Department of Foreign Affairs organise shuttle buses from Amiens. These always book out, so I needed to get in early to purchase my ticket.

To give you an indication of the sheer number of Aussies attending the service, over 20 full buses of Australians left Villers-Brettoneux and Amiens for the service. That’s only the people on buses; I talked to many people who left it too late and had to book a taxi. There were thousands and thousands of people that had made the trip over to attend.

The bus left at 2am. Setting my alarm for 1.30am was not fun at all. I almost thought I shouldn’t have even bothered booking a hotel and just slept in the train station for a couple of hours. Luckily the shuttle bus departure point was just around the corner from my hotel. So donned in about a thousand warm layers, I headed to the bus.

Arriving at the War Memorial

Given the high terror threat in France at the moment, this was the first year that they introduced security screening to get in. Hence we needed to have our bags checked and step through a metal detector.

I had a bit of a cheeky laugh at the French security officers determined to speak to everyone in French even though 95% of the people coming through security were Australian.

Upon entry to the site we were given complimentary service booklets as well as commemorative badges to take home with us. Being 2016, this was the first year of centenary commemorations. So it is a special badge to have.

Breakfast was also provided for everyone attending. Hot tea, coffee, croissants and pain au chocolate was being served. Given how cold it was the warm drinks were great!

Whilst the official dawn service doesn’t start until the official party arrive at around 5.30am, the pre service started not long after we arrived at around 3.30am. The highlight was the navy band accompanied by wonderful vocals from both an Australian schools choir and a navy singer.

The songs they played were carefully chosen for the occasion and most of them were Australian. I must say, being surrounded by Australians and all things Australian had me feeling the first twinge of homesickness that I had in a long time.

Accompanying the band at some points were videos and photos from the Western Front. These were projected onto the commemorative tower that dominates the landscape of the Australia War Memorial.

By the time the service came along I was well and truly shivering. I hadn’t thought the cold was too unbearable when I first arrived but I forgot that it gets colder as you approach dawn. I had on thermals, a long sleeve, two pairs of warm socks, gloves, a wool beanie, a scarf, my 100% wool jumper that I picked up in Norway and my big down coat- I was still cold! So it is something you have to be prepared for if you are going to come to the service.

But even the cold couldn’t take away from how special it was. The whole service was done in a very tasteful way. It acknowledged those who have served in the Australia and New Zealand Armed Forces, with of course a special emphasis on those serving on the Western Front.

We heard commentary from late diggers that served in the area, current soldiers read out the old diary entries of an Australia soldier serving on the Western Front and most of all we heard of the tragedies that happened here. Whilst our world isn’t yet one without war, when reflecting on the sheer loss of life during the world wars, I’m somewhat thankful that conflicts have moved beyond trench warfare.

And of course the playing of the last post and the singing of the Australia anthem is always something that makes my heart feel heavy.

The service ended with the laying of wreaths. While the official wreath laying occurs first, those attending the service can also register to lay a wreath. The master of ceremonies patiently read out the hundreds of people who were laying a wreath and whom they were laying them for. I think this was the most beautiful part of the service, because it highlighted the connection the thousands of people attending the service had with those that had fallen here.

Following the service there was some time to actually visit the memorial itself, this time in the light. Whilst some parts of it (such as the tower) were closed off for the services, the most significant part of the memorial; the graves of those fallen are open to visit. Spring is a special time at the memorial because all of the flowers around the graves are blooming.

Visiting the graves and looking at how many were unnamed, or how young some of the named ones were a really eye opening experience. It was a very emotional day for me that is for sure.

We arrived back in Amiens on our shuttle bus at around 9am. I was able to catch a few hours of sleep before check out time which gave me just the energy I needed to explore the town of Amiens itself.

I was excited to find out that the cathedral here is UNESCO listed. I absolutely loved it. It reminded me of the Notre Dame of Paris a lot. And the inside was absolutely incredible. I think it had been sufficiently long since I had visited a cathedral that I wasn’t feeling as blasé about them.

The town itself is also really beautiful. It reminds me a lot of Belgium and the Netherlands with the canals that run through it. I wasn’t expecting to find much here at all but the town almost had me wishing for another day to explore.

Of course being this close to Belgium, I also managed to eat some incredible mussels! Moules frites are one of my favourite dishes and I ordered some Normandy inspired ones served with Camembert and apple. They were superb!

As I walked back to the train station to catch my train to Paris (and then my flight back to Florence), I glimpsed one final reminder of the Australians that served in the area. Just outside the station on opposite walls were collages of photos of Australian diggers, some of them even with local people. On one side, it read ‘Merci’ and on the other it said ‘Thanks’.

Whilst attending an Anzac Day service overseas might not be on everybody’s list, it was an incredibly special experience for me, and something that I’ll never forget.

Five Days in Malta: The Best Impulse Trip Ever