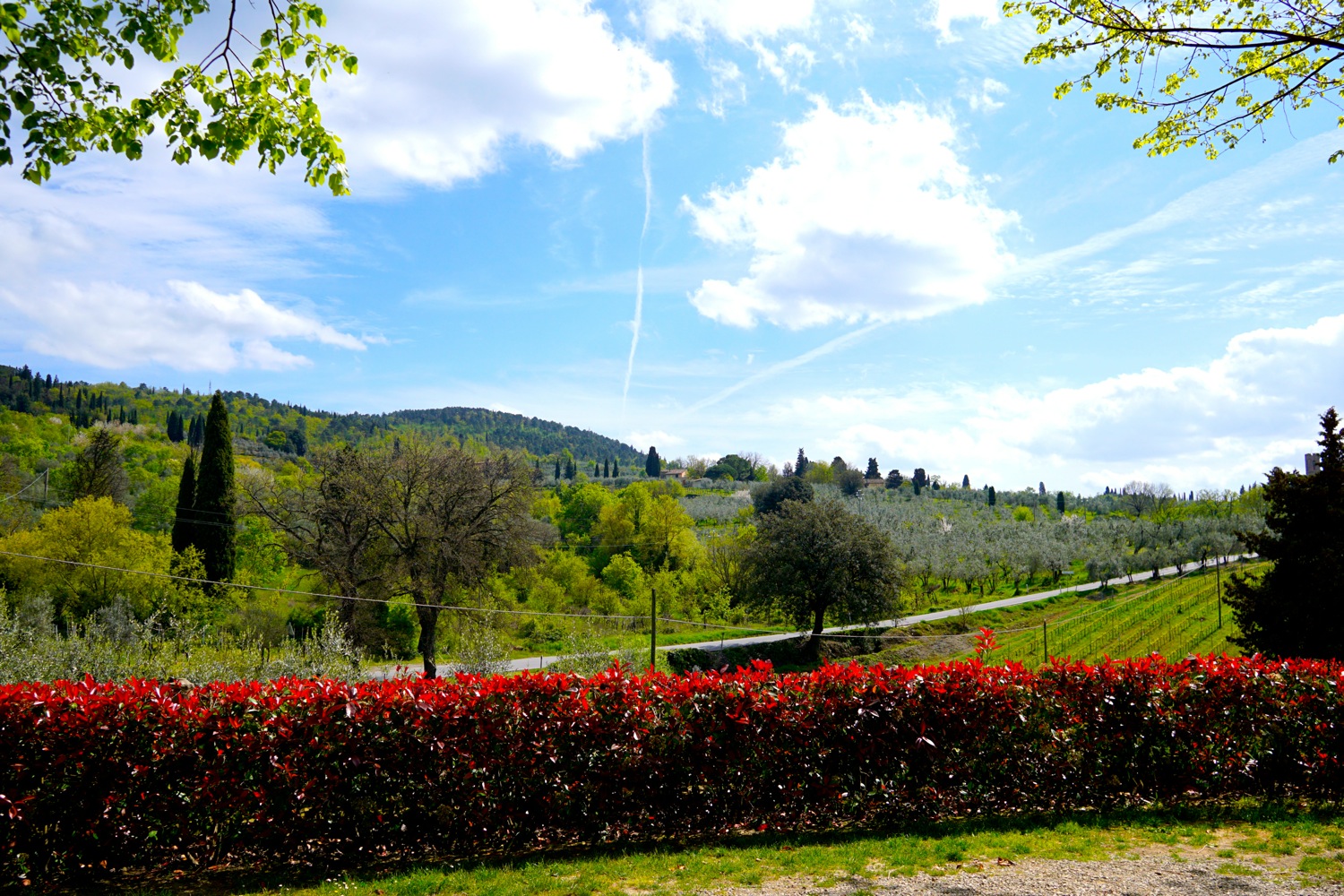 Tuscany is one of my favourite regions in Italy. It is home to some beautiful little towns, gorgeous countryside and some of the world’s best wine.

Florence , the clear jewel of the region, makes the perfect base for wider exploration of Tuscany. Day trips to many Tuscan villages and towns are easy on either the train or bus networks.

During my two months in Florence, I was able to get to some of these nearby towns. But there were many more on my list that I just didn’t make it to. Two weeks ago, when I packed up my bags and left Florence I knew it wouldn’t be the last I’d see of Tuscany.

So here are my recommendations for some of the best day trips to do from Florence. I made most of them myself, but I’ve add a few at the end that I didn’t quite get to do but have come recommended by friends.

I know many people don’t do Pisa as a day trip, instead choosing to stay a couple of days in Florence before than moving on for a day or two in Pisa. But to be perfectly honest, there isn’t a lot to do in Pisa. We had easily explored everything in half a day and it was so easy to get the train from Florence.

There is also a bus connection between Florence and Pisa that works out slightly cheaper and sometimes doesn’t take any longer than the train (depending on the traffic and the time of the day).

Clearly the one thing that makes Pisa worth at least a day trip is the phenomenal Leaning Tower of Pisa. Other than its historical value and the fact that it is genuinely beautiful (lean or no lean), it is also super fun to laugh at all the tourists trying to take funny lean photos.

We chose not to climb the tower because it didn’t seem worth the €15 and neither of us were feeling up to it.

I wasn’t lying when I said there wasn’t much to do other than Duomo Square. We stopped by a pretty square, took some photos of the Arno and wandered around some pretty streets. After that there really wasn’t much else to do so we defaulted to the best thing to do in Italy: eat.

We stopped at this awesome restaurant and I ate some amazing fish ravioli followed by what is still the best chocolate semifreddo I have ever had. Semifreddo, if you aren’t familiar with it, means ‘half frozen’ and is basically a cross between icecream and mousse. It’s one of my favourite Italian desserts.

How to Get to Pisa from Florence

Train- Trains run every half an hour from Florence Santa Maria Novella to the main Pisa train station. Tickets cost around €7-10 each way. They take about an hour, although some are more express than others.

Bus- There is a bus that runs between Florence and Pisa Airport that you can for as cheap as €5 each way.

This UNESCO listed town is my favourite in Tuscany. It is certainly touristy; even on a Monday in late April in crappy weather it was full of tourists. I’d hate to think what happens in high season when such a small town is full of some many tourists.

There isn’t one single thing I can point to as a monument to visit in San Gimignano. The thing that makes San Gimignano is its beautiful little streets, its amazing main square, and its stunning architecture. It really is medieval.

Of course the most famous aspect of San Gimignano is the tower houses that loom over the city.

The village sits on a hill overlooking some of the spectacular vineyards that are so quintessentially Tuscan, so there were some great beautiful landscape photo opportunities as well.

San Gimignano is the sort of town you take in slowly, without any sort of plan or assumption about the time spent in the city. We just picked a street and followed it, stopping to visit shops selling beautiful Tuscan wares, or to take a photo of some magnificent side street or building.

Two times we stopped for some delicious meals. I had the best bruschetta of my whole two months in Italy at a little restaurant at one of the entrances to the old town at Caffe Giardino. We ordered it to share as an entrée but I had some serious regret about not just ordering one for myself as a main.

The restaurant had a huge range of different bruschetta toppings- so I seriously wouldn’t order anything else there!

We also had some delicious gelato in the main square. A strong indication of excellent gelato is when there is a twenty deep line out the door into the square. As we were waiting to get our gelato, the owner and chef stopped us to have a chat and take a photo. He was hilarious, and interacting with customers is what he does on a regular basis, so chances are you’ll be able to get a photo with him too!

I had some of the best gelato of my trip here; especially the raspberry and rosemary flavoured gelato that I wished I had ordered more of.

How to Get to San Gimignano from Florence

Bus- there is no direct bus between Florence and San Gimignano. You’ll need to switch in Poggibonsi. Tickets are around €5 each way. It takes about an hour and half including the wait time.

This town is the art capital of Tuscany. It’s home to a huge number of art and music festivals throughout the year. Unfortunately my visit didn’t fall when one of these festivals was on.

Lucca isn’t as well known as many of the other beautiful Tuscan towns and that is one of the reasons I loved it so much.

My friend Kenza was visiting for a couple of days and on her last day in Florence we decided to head to Lucca for a bit of a change of scenery.

Unfortunately we didn’t have the greatest weather for our visit. Although I had experienced some really warm and sunny weather in April, May decided to be super terrible for for the most part.

But the rain managed to hold off enough for us to wander around the old town. The most formidable part of Lucca is its old city walls that are so well preserved that you can walk the whole way around the city on them.

They don’t have the majesty of Roman walls- they were built in the Renaissance. But they are still over 500 years old and completely intact!

The rest of the day we didn’t really have a direction in mind. We just wandered down small streets and stumbled upon beautiful squares. I don’t think Lucca had the beauty of San Gimignano but it did have loads of charm.

You really feel like you are in Tuscany when visiting Lucca, it doesn’t seem like an exhibition put on for visiting tourists like some of the other cities.

How to Get to Lucca from Florence

Bus- The bus takes about 80 minutes and costs €5 each way.

When we were visiting Pasq’s relatives in the Tuscan countryside they took us to Monteriggioni and I was blown away. I didn’t expect to stumble upon a town like this just on a family outing.

Monteriggioni is located on a hill, surrounded by vineyards in every direction. My favourite part of our trip was climbing up the old walls to stare down at the stunning countryside below, an experience only made more beautiful by the fact that sunset was quickly approaching.

The town itself is incredibly small; we were able to walk around it in no time. But one of the best things to do in Monteriggioni is to sit in the square with a coffee, gelato or Aperol Spritz and just take in the atmosphere

How to Get to Monteriggioni from Florence

This might be logistically hard as there are only two departures per day from Florence. You might need to change in Siena. Tickets cost around €5 each way.

Tuscany is home to some of the best wine in the world. Red wine is my favourite so I really wanted to taste and learn more Chianti. Chianti is an incredibly good red wine that is produced in the Chianti wine region between Florence and Siena.

We hopped onto a day tour that took us to two wineries and to two small Chianti towns; “Greve in Chianti” and “Castellina in Chianti”.

The wineries were superb. At the first winery we learnt all about the wine process, as well as tasting some good wine and great olive oil and chilli jam. I spent a fair bit of money buying a bottle of Chianti, some olive oil and some of that amazing chilli jam.

The second winery was clearly the better of the two; the wine was incredible and the balsamic vinegar from Modena was the best I have ever had. What I loved the most about the second vineyard was how incredibly picturesque it was!

The two towns were also really pretty; I especially loved Castellina, which was such a beautiful surprise at the end of the tour. It was really medieval, the whole village being located in the walls of the castle. We only had a short time to visit but it was stunning!

I attempted to do this trip on my last couple of days in Florence but just didn’t get there. It’s number one on my list for my return!

How to Get to Siena from Florence-

Train- The train takes about an hour and half and costs about €9 each way. Trains leave every half an hour from Santa Maria Novella. But the train station is located a little bit out of the centre of Siena so you’ll have to get another bus or walk.

Bus- The bus drops you off directly in town. It takes about the same amount of time as the train and only costs €7.80 each way.

This UNESCO listed town near Siena was also on my list but getting there on public transport is logistically difficult. The easiest way would be overnight in Siena and catch a bus the next day. But you might be best to hire a car and tackle the Italian drivers.

Have you got one to add to the list?

This is definitely not a complete list. There are so many unexplored and beautiful towns in Tuscany that you could spend a month exploring all of them and still have not seen anything!