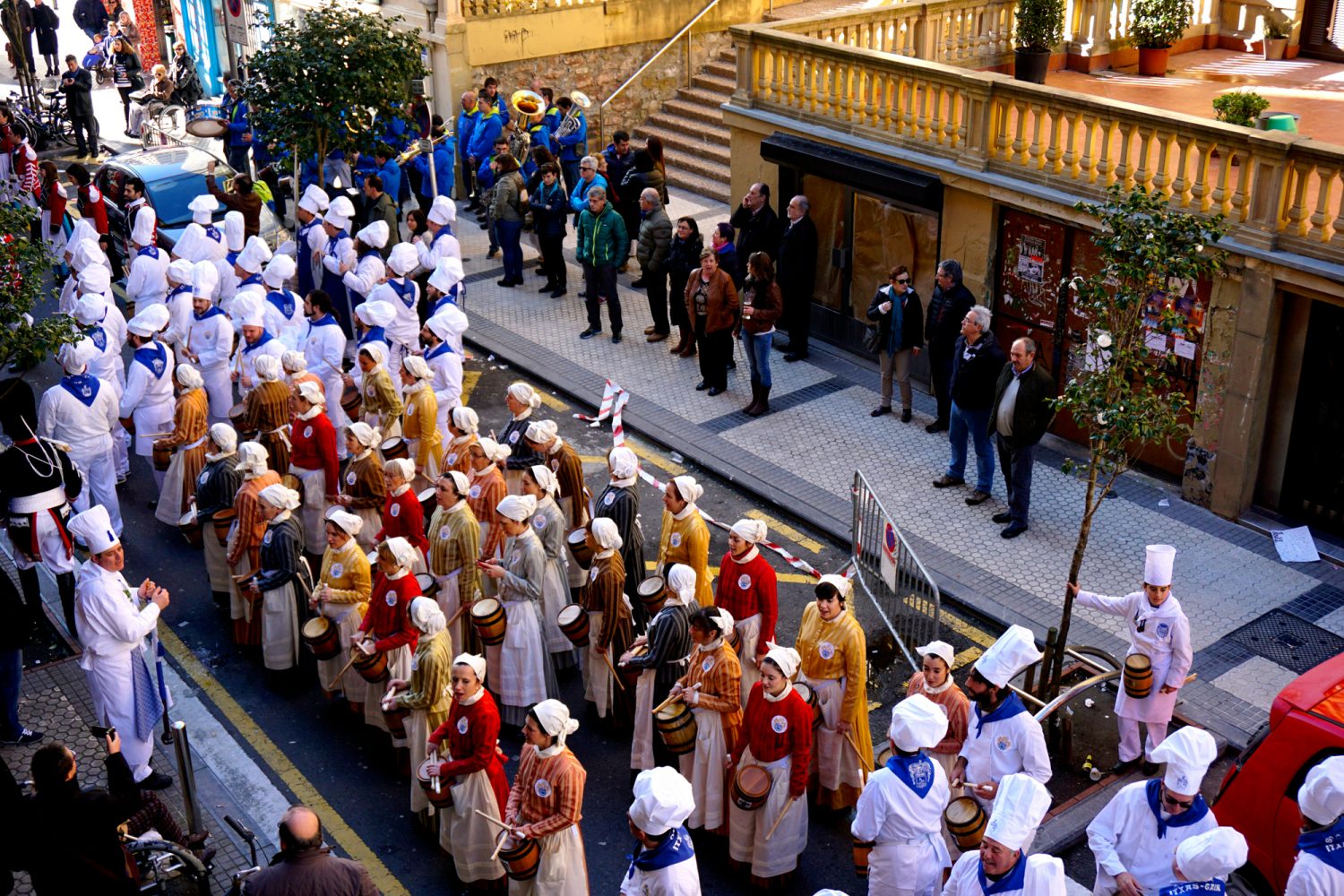 But after being told by multiple people about the amazing food scene I decided to follow my stomach. Nonetheless, I still arrived in San Sebastian with no plans but to rest up and eat food. They seemed like pretty good plans to me, especially given I couldn’t hit the beach at this time of the year.

Those plans went out the window when I arrived and the guy at the desk at my hostel explained that at midnight the very next day, La Tamborrada, a local festival, would begin.

La Tamborradda, as it is officially called, requires 24 hours of celebrations. But it’s not the type of festival that brings hoards of tourists into town.

It was still clearly low tourist season, and out of the eight people staying at my hostel, only one of the girls had come for the special day (and the reason being that she was Spanish and it was her name day as well). We really just got lucky with being there at the right time, because San Sebastian is ultimately a local experience.

Despite the fact that I was well and truly wrecked from 12 late nights in a row in Portugal, I decided to trade in my three planned days of rest and relaxation for the cultural experience of partaking in La Tamborrada in San Sebastian. I sure wasn’t getting much sleep while the festival was on.

What is La Tamborrada in San Sebastian?

According to local legend, the origins of the festival are rooted in the French occupation of San Sebastian in the early 16th century, during which the locals used to mock and imitate the procession of the French soldiers by banging on buckets. Today the La Tamborrada in San Sebastian is kept alive thanks to the sociedades gastronomics (gourment clubs) in the city, which make up much of the official marching bands.

Celebrating La Tamborrada in San Sebastian in the square

La Tamborrada is kicked off in the main square at midnight, right when the day begins. We arrived 45 minutes before midnight and the square was packed. We managed to buy some drinks in plastic cups from a nearby bar and stake out our spot with the rest of the locals.

I’m not quite sure what I was expecting but nothing could have prepared me for what happened when it hit midnight and the flag was raised. The next hour was full of the whole crowd singing and drumming along to songs that everyone knew the words to.

The first was clearly the anthem of San Sebastian as the crowd chanted ‘Oh San Sebastian’. We danced, we tried to sing along and had no control over our bodies as we were pushed around by a super excited crowd that were just having a lot of fun. It was an incredibly unforgettable experience.

But the party doesn’t end once the crowds start vacating the square. We followed the crowd to the streets and ended up in a Spanish bar. La Tamborrada is a holiday in San Sebastian, so everyone was out having a great time.

It was definitely a very Spanish/Basque experience as although I might have recognised some of the beats, we didn’t dance to a song with English lyrics all night. Of course the normal music was interrupted every now and then so the crowd in the bar could partake in a sing along with the anthem once again.

We wandered back to our hostel, which was located slightly out of the main part of town at around 4am. One of the girls from the hostel wondered if we would be kept up all night by the bands that were marching the street.

I naively said ‘I doubt they would be around this area, especially at 4am in the morning’. No sooner had the words left my lips, we turned the corner to find an organised marching band ready to make some music.

The next 24 hours followed much of the same pattern. I definitely didn’t need an alarm clock because we were woken up about once an hour by a different group coming past our window to sing.

Despite my hangover, I still couldn’t help but enjoy the whole experience of listening to the bands from the balcony of our room throughout the day. It’s a really magical day and all of San Sebastian is out and about enjoying the celebrations and singing along with the bands.

By the time we arrived back in the square at midnight for the closing ceremony, we could even sing (or at least hum) along to many of the songs. We had been hearing them all day after all.

I remember returning back to the hostel that night and grumbling that San Sebastian Day clearly lasted more than the 24 hours it was meant to. People still hadn’t had enough of marching and singing well into 3am the next day.

When travelling you often find yourself surrounded by tourists, especially at big or special events. It’s not surprising, almost everyone wants to spend at least one New Years Eve on the banks of the Thames in London or at least one carnival in Rio. However it was incredibly special to be able to participate in what is still essentially a local celebration.

Getting a Local Experience in Aix-en-Provence