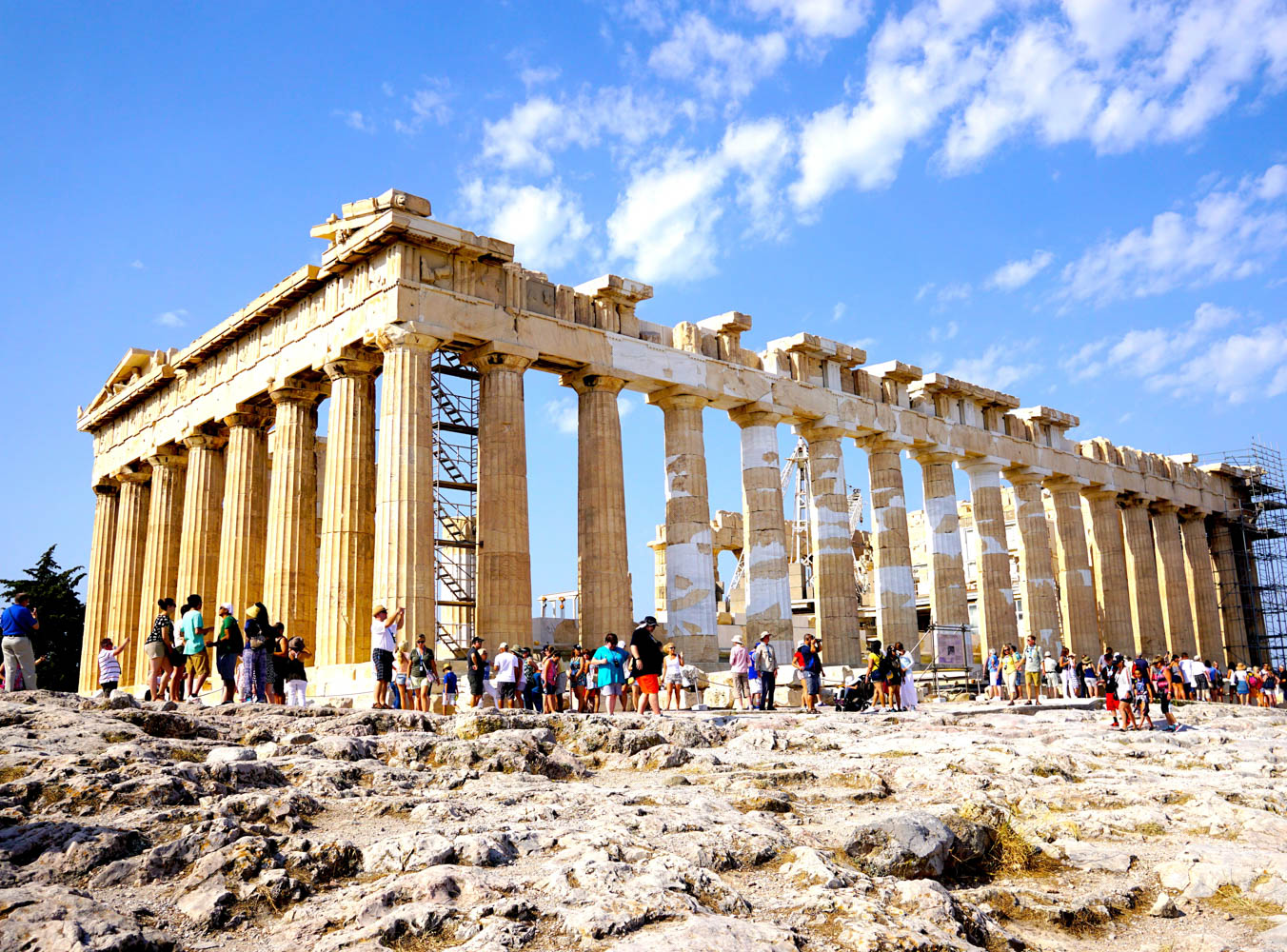 Athens is a strange city. It’s missing the cultural finesse, beautiful old town, and lovely atmosphere of most European cities. You’d never mistake it for Paris or Prague. Many of the buildings are depilated, covered in graffiti, and industrialised. The effects of the economic crisis can be seen everywhere.

But Athens has one trump card; the Acropolis and other related Ancient Greek ruins. The ruins are the reason you can’t miss it, even if you only stopover for a day on your way to the islands. As with every other big city I’ve visited in Europe, I’ve put together a little guide of how to tackle Athens, with lots of my personal experience intermingled in there.

How Long to Spend

I’d recommend spending a couple of days. But if you aren’t interested in seeing the museums and just want to catch the ruins, one jam-packed day ought to do it.

I ended up spending five days in Athens- four at the start of my time in Greece, and one at the end. I definitely could have fit everything into a couple of days if I tried. But the heat of the summer was blistering and I was travelling with my Nan. Faced with the heat, we instead choose to leave our apartment at 8am, explore for a couple of hours, grab lunch and then head back to the sanctuary of our air-conditioned apartment for the afternoon. It was a good system; especially given I had a 4000 word university essay to finish.

There are many parts of Athens that make acceptable bases. The metro system is so good and cheap (unless there is a strike on which can happen) that you won’t have trouble getting around. Most of the city can be seen on foot.

But my advice would be to stay as central as possible. Anything near Monastiraki, Syntagma Square or the Acropolis metro stops will be perfect. A local told me specifically to avoid Omonia, as this once beautiful part of Athens has turned shady, especially at night.

How to Get Around

Given the heat, and the fact that I wanted to avoid walking for my grandmother as much as possible, we mostly used the metro system to get around. But it’s very easy to get around completely on foot; my friend was there for a week and hardly ever hopped on the metro. Ubers and Taxis are also ridiculously cheap.

This has to be the first thing I mention, because it’s the number one reason to come to Athens.

The one thing about Greece is that it really skews your perception of what is old and what isn’t. Things from 500 years ago seem really new when you are looking at a building that was erected in 438 BCE. And it’s crazy how well preserved the old buildings that make up the Acropolis are.

A walk around this part of Athens is like stumbling through a time machine, and it’s really hard to grasp the sheer age of everything. It’s incredible to think they had the technology back then to build huge buildings that would still be standing 1500 years later. It would be interesting to see if what we are building today would stand the same test of time.

The Agora is the ancient civic centre of Athens. Located just below the Acropolis, the Agora is mostly in ruins. I almost wish we had done a guided tour of the Agora, because all of the buildings are basically just old outlines of the wall that have been excavated.

One of the major reasons temples like this have outlasted earthquakes and time is because of their design, that is based on the human spine. The Ancient Greeks knew that people’s bodies could move and stretch without breaking and thus they built their pillars like the human spine so they might shift but not collapse during the many earthquakes that plagued the region at the time.

Another one of Athen’s Ancient Sites, Hadrian’s Library is located right in the middle of the Monastrikki neighbourhood. I love that you can be walking around a district of Athens and just bump straight into so much history.

Hadrian’s Library is kind of self-explainable, it’s the ancient library of Athens where hundreds of Papyrus scrolls were once kept. It’s much smaller than the other Ancient sites but worth checking out, especially if you have the combination ticket that includes six of Athens’s ancient archaeological sites.

This small archaeological site is located just below the acropolis. It’s worth popping in for a look, especially if you have the combined ticket that includes entrance to this site. What I specifically liked about this temple was how huge the remaining pillars were, and the intricate carvings located at the top of these pillars.

You can’t do one without the other, otherwise you aren’t really getting the full picture of the Acropolis.

The streets of Monastiraki surely don’t have the charm of many European old towns, but they at least have one thing going for them; the Flea Market. You’ll find all sorts of souvenirs and products, although the quality can be dubious at times. My grandmother bought tea towels but there was everything from clothes to Grecian style sandals.

Parliament and Changing of the Guards

Almost every European city I have visited has some form of a changing of the guard’s ceremony at their parliament building or palace. I often find them tacky and touristy but the guard ceremony that occurs once a week on a Sunday in Athens is the best I’ve seen. Almost a hundred soldiers, accompanied by a marching band march down the street and around to the parliament building. They have nails in their shoes to make as much noise as possible. It was great to witness!

Athens was my first stop on my month in Greece and I dived into Greek cuisine. I’m going to write a post specifically on the dishes you need to try while in Greece, for I do have some specific restaurant recommendations for Athens.

O Kostas- hands down the best Gyros in all of Athens. It’s a very small, unassuming shop located on the edge of a construction site but don’t let that turn you off. Their bread, their sauce, their meat, everything was perfection. It was easily the best Gyros I ate the whole time I was in Greece.

Kalamaki Bar- the best lamb kebab/koftas stuffed with Philadelphia cheese from this restaurant were to die for, especially in combination with the mint yoghurt sauce. Kalamaki Bar was also home to the best Greek salad of my life.

Dio Dekares I Oka- a very affordable restaurant with lots of traditional Greek dishes to choose from. We tried the stuffed tomatoes, the moussaka, the lamb ribs and the tzatziki and it was all incredible.

Lokumades- the best Greek donuts in all of Athens. Try the ones covered in ice-cream, cinnamon and honey.

Fresko Yoghurt Bar- if you want to indulge in Greek yoghurt this is the place to do it. They have all types of yoghurt, my favourite is the sheep yoghurt and you can choose from an assortment of toppings from the traditional honey and fruit to chocolate and candy.