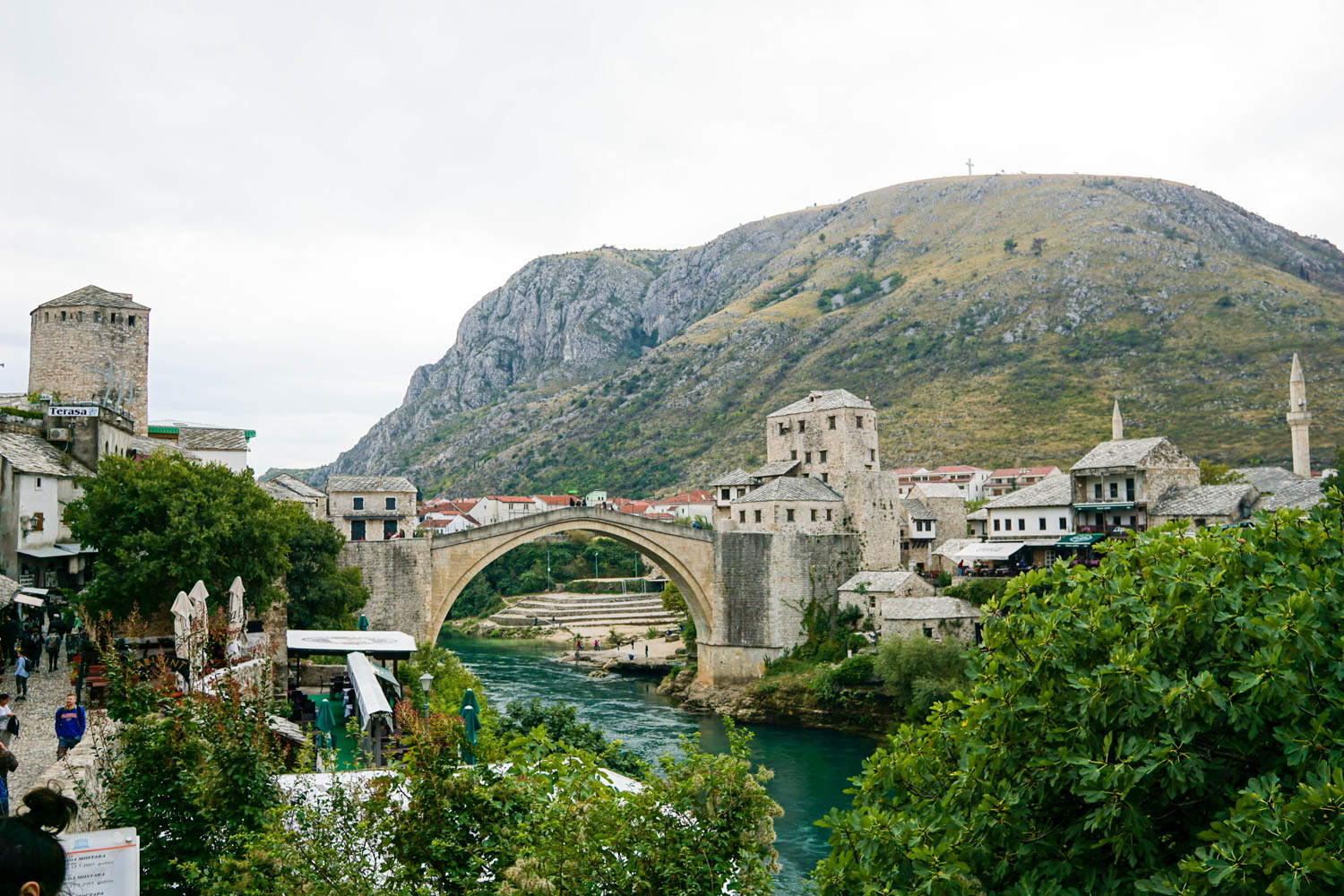 I’d already fallen absolutely in love with Bosnia and Herzegovina during the short two days I spent in the capital of Sarajevo. But there was one more stop I wanted to make in this tiny country before I made the journey all the way to Berlin to catch my flight across the Atlantic. And that was Mostar.

Mostar is certainly more visited than Sarajevo. Its proximity to Croatia means that those who wouldn’t otherwise have Bosnia on their travel radar head to Mostar to get a small taste of Bosnia. They usually sign up to day trips that shuttle people around the small city. But Mostar is a city that deserves more than a brief visit. There is so much to learn as well as a small collective of ridiculously amazing hostels that make spending a little more time in town worth it.

I spent two days in Mostar; the first day was spent exploring the town of Mostar itself and the second day was spent on the infamous Bata’s Crazy Tour run by the equally famous; Hostel Majdas.

This was the first hostel opened in Mostar after the war, when backpackers were the first tourists to start heading back to this beautiful old town. The hostel was originally just a couple of spare rooms in the hostel owner’s house. Now it has expanded into its own building with lots of cute little rooms of 4-6 beds and wonderful facilities. But what makes Hostel Majdas so special is Majdas herself who is a wonderful person who will greet you with cake and other delicious things. It’s like living in a little family, complete with a home cooked breakfast that is different everyday. I wouldn’t stay anywhere else in Mostar!

Ruined Buildings, Bullet Holes and the Wounds of War

Sarajevo still carries the scars of war, with the Sarajevo roses one example of that. But the city has slowly been rebuilt in a way that many of the buildings in Mostar have not. The city of Mostar is a city where the wounds of war can be seen everywhere. A simple walk around the city will give you a sense of just how the city was impacted. There were countless ruins of bombed buildings and bullet holes in walls all over the place.

Remember what I’ve said about backpackers and depilated, graffiti covered, abandoned buildings? The Sniper Tower in Mostar is the absolute pinnacle of that obsession. You have to be hoisted over a wall to get inside, you’ll have to walk up a half finished staircase and you’ll finally arrive at the top where you can take in an amazing view of Mostar. It’s a favourite afternoon activity of many backpackers to sit up on the roof, drink some wine and wait for the sunset.

Other than offering a cool view, the Sniper Tower also offers its own story. Before the war the Sniper Tower was an unfinished building that was meant to be built for a bank. But as one of the tallest vantage points in the city it became the favourite place of the Serbian Croat snipers.

Its height wasn’t the only advantage- the Sniper Tower is located right along the river that became the battle line of the fighting in Mostar. The Bosnian Croats fought on one side, while the Bosnian Muslims (Bosniaks) fought on the other. Interestingly, those lines are drawn even today with most of the Bosniaks continuing to live on their side of the river.

The Old Town of Mostar

Outside of the war history, the UNESCO listed Old Town and Old Bridge of Mostar is the highlight of any trip to the city. Much of the beautiful old streets were destroyed during the war, and the famous medieval bridge eventually came crumbling down. The re-built version is a source of pride for all of those that live in Mostar.

It’s a beautiful rebuild and replication of the old bridge that attracts tens of thousands of visitors to Mostar every year. Many of which do the crazy thing of jumping 20 metres to the river below. There is even a school that specifically teaches you how to do it without getting hurt.  There was absolutely no way I was doing that though- I would have hurt myself.

For months I had been bumping into backpackers who had been to Mostar and almost all of them said the same thing:

“Make sure you stay at Hostel Majdas and do the tour’.

With that sort of glowing recommendation of course I was going to jump straight on it once I got to Mostar.

And if I had to make a list of the top ten days of my whole 15 months travelling the world, the day of Bata’s Crazy Tour would be right up there.

The tour began by us shoving close to 20 people into one tiny mini van. I was lucky enough to call shotgun on the front seat so it wasn’t too squishy up there. Some people ended up on garden seats in the back. It’s not the safest thing any of us have ever done but we were in Eastern Europe after all.

Bata then proceeded to drive us all around the city to specific spots that help to explain his story and experiences of the Bosnian War in Mostar. It’s really special hearing this story from him for a few reasons. Firstly, he actually experienced it. He had to be smuggled out of Mostar in a fake ambulance and becoming a refugee in Sweden.

Secondly he tells the story in a really encompassing way that includes the past and the present. Mostar is very much a country that still lives in segregation and he used places around town (such as football fields that were built by the Croats during the war, or schools where only Croat students can go) to tell this story. It reminded me a lot of the segregation I witnessed in Northern Ireland.

After filling our brains with a heap of information he gave us a momentary reprieve with the next part of the day. We headed off outside of Mostar to Kravice Waterfalls, an incredible spot located right near the Croatian/Bosnian border. It’s a great swimming spot but given I was attempting to fight off a cold I was not willing to jump in. It was the start of October after all and it was not warm! Here we chilled out for a bit, watched silly boys jump off rocks and had a big communal lunch.

The old town of Pocitelj

The next stop was the old medieval town of Pocitelj. This was my favourite stop of the whole day. This little town with its beautiful walls and castle is on the tentative list, awaiting approval as a UNESCO World Heritage List. I really hope it gets this accreditation because it is so well deserved. It was more stunning and interesting than many listed sites I have visited.

But other than telling a medieval story, Pocitelj is a town that tells a story of the war. The people that lived in this town were mostly Bosniaks and all of them were left homeless when the Croat forces ejected them from their homes. Most of them know someone who died in the war or who were imprisoned and later killed in what can’t be called anything other than a genocide.

As we waited for the sun to set over the town, Bata sat us down in a spot in town and proceeded to tell us about the history of Pocitelj and other experiences he had during the war. How he probably would have been killed if not for the lies of his Croat classmate who decided to spare him. How he had to hide under houses before being smuggled out. It was a special and emotional moment and I’m not going to say more because it’s a story only he can tell properly.

After we watched the amazing sunset and explored the castle we headed to what was the highlight of the whole trip to me. When Bata was first doing these tours he found himself and his group caught in a downpour. An old Bosnian lady quickly ushered them inside her house where she helped them dry off, made them the famous Bosnian coffee and provided them with refreshments. From that moment on, Bata has continued to bring groups back to her house.

This gorgeous old lady made us coffee and we drank her famous schnapps which stuffing our faces with delicious snacks. In return we provided a modest donation. He later told us that before he started bringing his tours here, the lady of the house was struggling to financially provide for herself. But thanks to the ‘power of backpackers’ as Bata likes to say, she is now doing fine. It was a special experience that I won’t forget.

The only disappointing thing about the tour was that we only got to visit the Dervish House at night. Many people at the hostel headed out the next day to revisit it in the light, but unfortunately I needed to jump on a bus to Vienna . A Dervish House is essentially a type of monastery. It kind of reminds me of an ancient version of a mediation retreat.

It is stunningly beautiful, although my night photography does not do it justice. It was the perfect way to end the tour.

You seriously can’t stay anywhere else but Hostel Majdas for only €9 a night for a 4-8 bed dorm. Bata’s Crazy Tour can only be booked through the Hostel and it costs €30 for a 10 hour tour, plus you’ll need another €10 for food on the tour if you wish.

I arrived in Mostar in a shared taxi from Sarajevo, but there are heaps of bus connections. There are also bus connections to Dubrovnik and to Split in Croatia. I left on a 14 hour bus from Mostar to Vienna. Just head to BusBud to find all of the connections in the area.