A Day in Oxford 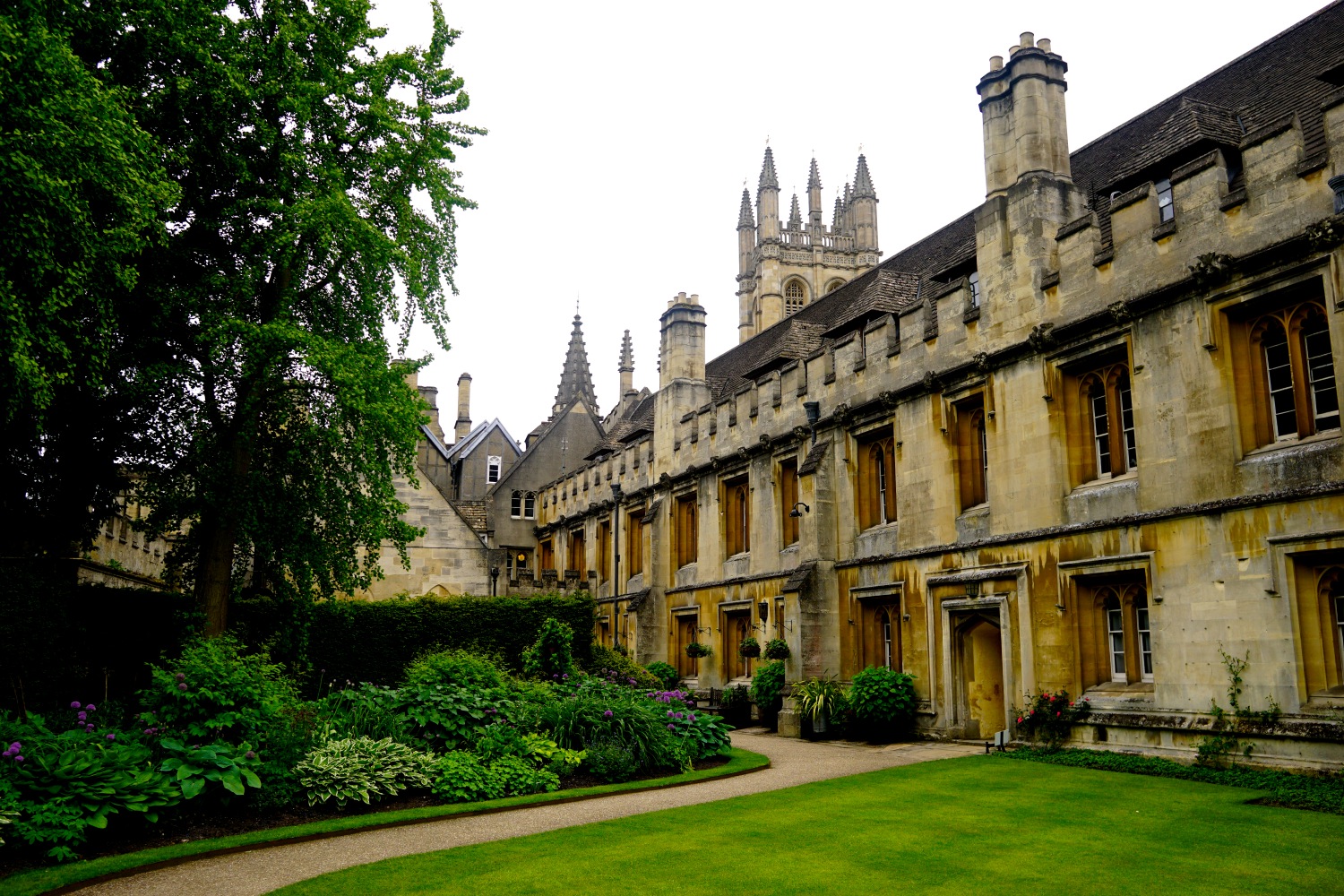 Oxford has always been somewhere in the United Kingdom that I wanted to visit. Whilst there are plenty of UNESCO listed sites within a stone’s throw of London , Oxford called to me, despite it’s lack of heritage listing.

If I’m being perfectly honest- I’d say it’s a Harry Potter thing. Many of the iconic parts of Hogwarts such as the Great Hall and the Entrance hall were inspired from places within Oxford.

I didn’t get a chance to visit Oxford back in January while I was in London. So upon my return to London in June I had two goals; watch as many Westend shows as I could squeeze in, and head out to Oxford.

As soon as I booked my flight to London, I also looked up bus tickets to Oxford on Megabus UK. I love Megabus as a way to travel super cheaply and it didn’t fail to deliver on Oxford tickets. By prebooking I managed to get return tickets from London to Oxford for 2 pounds and a 50 pence booking fee.

At that cheap of a price, I booked them. I figured if my plans had changed the most I’d be losing was 5 Australian dollars. Not a very expensive loss!

The bus leaves just outside of Victoria Bus Station in Central London and it takes roughly 1.5 hours, depending on the traffic. It’s also equipped with a wifi connection and power outlets for your devices. Oh and thankfully there is a toilet on board! It’s definitely not a hard way to travel. I read my kindle for the majority of the journey.

My bus should have gotten me to Oxford just in time to make the 11am walking tour of Oxford. I love free walking tours and this one had come highly recommended by a friend. Unfortunately a twenty minute bus delay meant I missed the free walking tour and had to fend for myself.

A small amount of research gave me a general plan for a self-guided walking tour. The idea was to walk around Oxford, popping into some of the colleges to have a look around.

Basically what I did is find everything I wanted to see, marked the down in my google maps app and worked out a geographical direction from there. Sometimes I got a little lost and ended up somewhere else, but for the most part I followed this.

The bus dropped me off right on Cornmarket street, which is one of the main streets of Oxford. This was my first taste of the city. I loved the cute little shop fronts, although they don’t compare to the heritage shopping streets of Chester. I stopped in for some morning tea, something that was very necessary after the long bus ride. A chai latte and a flapjack slice seemed to do the trick.

This also gave me some opportunity to do some research.

At this point I was wandering aimlessly down Cornmarket street, a cup of chai in hand, wondering where or when I should start. That’s when I stumbled upon Carfax Tower.

This 12th century building is all that is left of St Martin’s Church that used to have pride of place at the end of Cornmarket street. You can pay to climb the tower for a view over Oxford, but I can’t say it was something I could be bothered either doing or paying for at that point in time.

I soon learnt that almost everything in Oxford comes with a price tag, so I had to prioritise exactly what I was going to be spending my money on.

I love old memorials and gravesites. There is something spooky and gothic about them. I was used to stumbling upon memorials in almost every city I visited, but few of them are this old.

Maryr’s memorial was erected in the 16th century to commemorate locals who were burned because of their religious beliefs. It’s a formidable memorial, but what I liked most is how modern buildings and roads have sprung up around it, while it has remained in its place.

Balliol College was my first college stop of the day. Visiting the colleges can be a bit tricky- many of them have very specific opening hours and most of them charge a fee (usually between 2-5 pounds). So it’s best not to expect to see all of them.

Balliol College was the first I stumbled upon that was open so I decided to go in and have a look around.

Living on campus for me was all about big concrete buildings and shoebox rooms. I was a bit dazzled by the fact that students actually live in these amazing old buildings, and walk the immaculately kept lawns.

I visited more than one college during my brief day in Oxford, but I still think Balliol was my favourite.

My next stop was the Sheldonian Theatre. I didn’t try to go inside- I’m still not sure if you can because I felt like saving all of my entrance fee funds for the colleges. But it’s a formidable building to gaze at from the outside.

This was one of my favourite buildings to visit, and I still hate that I didn’t have enough time for the guided tour of the building that takes you to hidden areas. I didn’t even get to see the actual library, which was used as the Hogwarts infirmary in the Harry Potter films.

Instead all I had time for was the Divinity School room. It was super incredible, and in hindsight I should have just lost time in other places and prioritised visiting the library. If I had my time again I probably would have headed here when I first arrived in Oxford.

This pretty bridge joins two adjacent buildings and can be spotted from the road near the Bodleain Library. I loved the architecture- it is definitely one of the best bridges I’ve ever seen!

I was extremely cheeky and got into this college for free. I worked out that unlike a lot of the other colleges, New College wasn’t checking the IDS of actual students of the college. So I put my backpack on and strode with purpose past the entrance in hopes of looking like a student.

It worked and I saved myself a couple of pounds on entrance fee. Unfortunately I was not able to repeat this trick anywhere else in Oxford.

I did much the same at New College as I did at Ballilol- I wandered the grounds, I popped into buildings and just took in the stunning architecture.

This was my second last college of the day. I have to admit that all the colleges seemed to mesh into one after a while. They were all different and each had some particularly stunning about it, but I still felt colleged out after I had visited my third college.

Magdalen College was also the most expensive of the day.

It’s easy to understand why this college can charge more than some of the others. It was more epic than the others I had visited, with huge buildings and amazing courtyards.

Trinity is really close to Balliol but it was closed when I walked past earlier in the day. Most of the colleges have very specific and limited opening hours, so as to minimise disturbance to the students. Hence I had to circle back later in the day to squeeze a visit into this college.

I’m not sure why I thought a fourth college was necessary, I think I was just determined to see as much as I could. What I loved most about Trinity College was the huge grounds. I walked around a bit, stopped at a park bench to read my kindle for a while, and just sort of relaxed. It was a great way to end my exploration of Oxford.

I’d skipped lunch, so by 3pm I was absolutely starving and desperately needed some food. So on the way to the bus stop to catch my bus back to London I detoured to the Covered Market to pick up some food.

Whenever I’m in the UK I always aim to eat Asian food. It’s not as good as the takeaway you get in Melbourne, but its better than what you’ll find on the continent. It’s also a great way to get my vegie fix as many Asian dishes come loaded with vegetables. The Thai place at the Covered Market didn’t disappoint- I got an awesome green curry loaded with vegetables- it was perfection.

My one takeaway from my time in Oxford is that I probably would have liked a little longer in the town. I still think Oxford is doable as a day trip but I probably should have headed off earlier, or even come back to London later. I felt just a tad bit rushed.