A Day Trip to the Loire Valley from Paris (Chenonceau, Cheverny and Chambord) 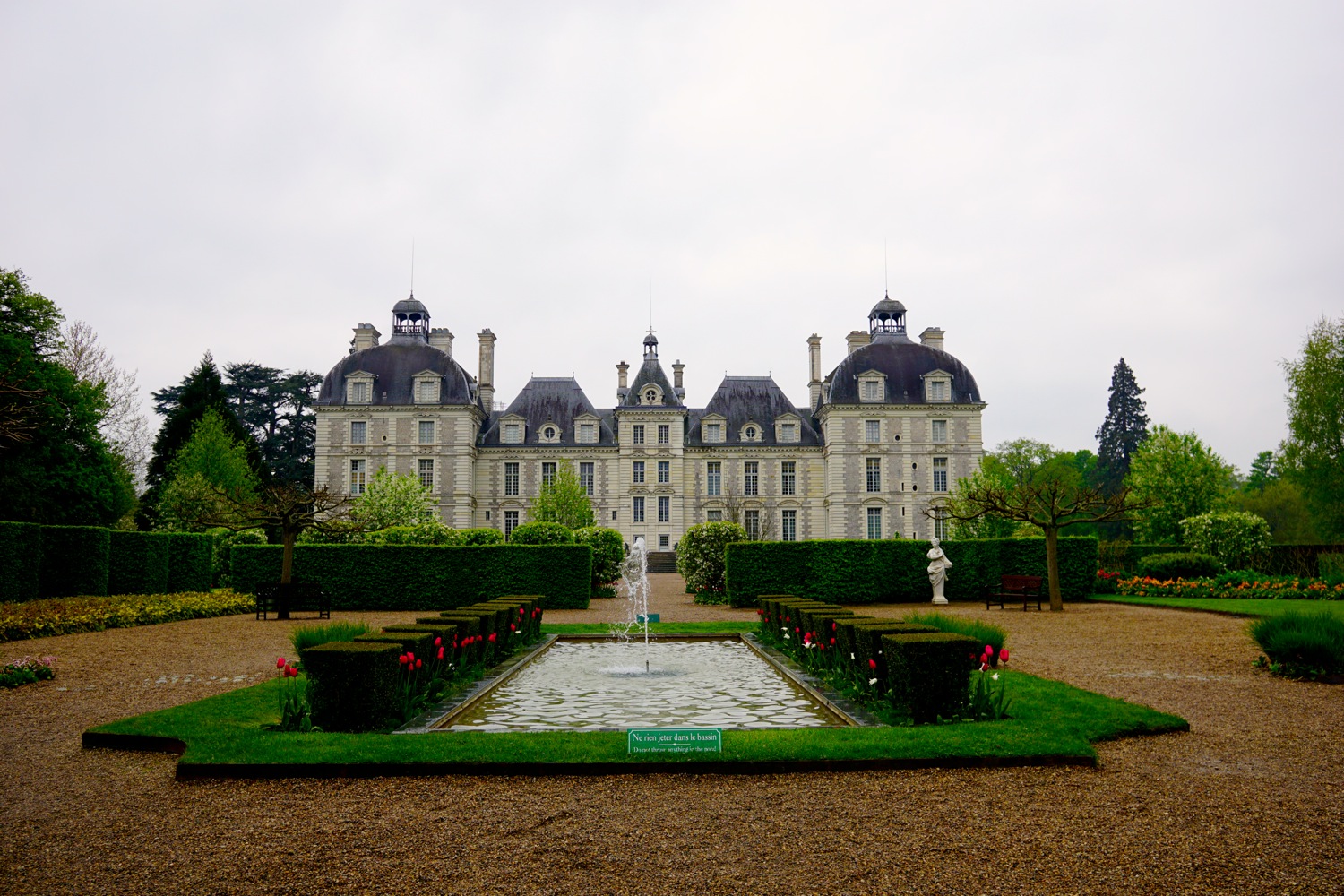 When I decided to go to the Western Front for the Anzac Day commemorations, I found myself with some extra days in Paris. This was my fourth trip to Paris so I really wanted to make the most of it by heading out of the city and exploring a region I hadn’t been to before.

My high school French teacher was from Tours in the Loire Valley and I remember her showing us pictures and raving about her beautiful region. At the age of thirteen I fell in love with those photos and the Loire Valley has been on my bucket list since.

The only issue I had was the logistics of visiting from Paris. Accomodation in the region was incredibly experience and there were definitely no hostels available. Moreover many of the chateaus were impossible to visit on public transport and I didn’t want to waste half of my time in the region sitting on buses and trains. Hence if I was going to do it myself I was going to need a car. I looked into tours but most of them were exorbitant.

I’d almost given up on my dream of visiting the Loire Valley when I stumbled upon a tour offered by France Tourisme. I had previously booked a Paris by night tour and Moulin Rouge tour with them and I was super impressed by their level of service. I accidentally booked the wrong night and the staff responded to me email within an hour confirming they had changed the date for me.

Hence I was super excited to find a Loire Valley day trip tour from Paris advertised on their website for €115. I’m going to talk more later about how this was incredible value, but to begin with this price also included all entrance fees.

The Loire Valley is located around 2-3 hours from Paris so this tour requires an early start. I arrived in Paris from Florence quite late the night before so the early wakeup was a struggle for me. I left my hostel 6.30pm to make my 7.15am departure.

When I first arrived at the office there were a lot of people waiting. I got a little bit worried about sharing a tour with a full bus of people. Luckily, the majority of people were there for the Mont St Michel day trip. In the end there were only 7 of us on the tour.

This meant that although I hadn’t paid the extra money for the minibus tour, low season meant I got it anyway. And I was lucky enough to score the front seat, which meant extra space and a lot of napping.

Our guide was also our driver and he was excellent. As we drove towards the Loire Valley he gave us lots of information about the region in both Spanish (for the Spanish people on the tour) and English. He explained the strong tradition of wine in the region, the other forms of produce that are grown here, the huge amounts of castles and its role in World War II.

The first stop was La Chateau de Chenonceau. As we approached the castle, our tour guide gave us some interesting history about the castle. This castle was built in the early 16th century by Thomas Bohier, the Chamberlain to King Charles VII of France, and his wife Katherine Briconnet.

But perhaps the most interesting history of the Chateau de Chenonceau is that for many years this castle was the abode of King Henry II’s mistress, Diane de Poitiers, who also happened to be his nanny growing up. But upon his death in 1559, the Queen, Catherine de’ Medici showed her power by kicking the mistress out to a more humble castle and taking up residence in Chenonceau herself.

Between the two of them they extended the castle out onto the river, which is what makes it so famous and beautiful today.

The one downside to my trip to the Loire Valley was that the weather wasn’t great. I thought I had done the smart thing leaving the trip until late April when it was far more likely to be sunnier and warmer than early March when I’d last visited Paris. Although late April meant Spring and beautiful castle gardens in bloom, it also bought with it lots of rain.

But even the crappy weather couldn’t ruin Chenonceau for me. It was just so stunning, made extra beautiful by the fact that parts of the castle are built over the river.

Interestingly, this river served as the demarcation line between free Paris and occupied Paris during the Second World War, and many resistance members used Chenonceau to smuggle people to safety and also to communicate across the lines.

The inside was also incredibly beautiful. I usually feel blah about the inside of palaces and castles (much like churches they all start to look the same after a while). But what I loved about Chenonceau were all the pieces, specifically table arrangements that had been created just for spring.

I made the most of visiting the castle in Spring by wandering through the gardens and seeing the array of colours from the blooming plants. I imagine that my experience of Chenonceau (and the rest of the Loire Valley) would have been very different without the beautiful flowers everywhere! It made me wonder just how many beautiful rose gardens I had missed out on during my three months of travelling Europe in the winter.

After our long visit to Chenonceau it was time to fuel up for the rest of the afternoon. Food or lunch isn’t included on the tour but our guide dropped us in the beautiful Loire Valley town of Montrichard. Here we all found ourselves eating in the same creperie on the recommendation of our tour guide.

Whenever you see a restaurant that is advertising proper Bretagne galette (the buckwheat kind) and they also have Bretagne cider on the menu, you know you are in for a treat.

I got a galette full of my favourite cheese; Camembert and potatoes. It was basically heaven. Despite my cold I couldn’t resist eating it with a bowl of cider as well. I only wished I had check in luggage so I could have taken a bottle back to Florence with me!

Whilst Chateau de Cheverny is the perhaps the least impressive looking of the three castles we visited on the day trip, it had my favourite interior.

What I loved the most about Cheverny is that it a real life, working and lived in chateau. The Harault family that own it have owned and inhabited it for more than six centuries and they still spend some time in the castle (obviously not in the rooms open to the public).

It’s a lot smaller than Chenonceau or Chambord, but this made it feel a lot more homey. It seemed like the furniture, paintings and tapestries were in the spot they have always been, rather than an elaborate set constructed for tourists.

The pink tulips in the gardens were also so gorgeous! They are definitely one of my favourite flowers and I loved the simplicity of having the majority of the flowers in the same colour.

Chambord is by far the most popular and visited chateau in the Loire Valley region. And this was obvious from the hoards of tourist buses in the carpark with us, and the hundreds of tourists in the castle itself.

The Chateau de Chambord was originally the hunting lodge of the royal family, and was built to be a representation of the power and wealth of King Francis I of France.

The estate itself is now a whole town, with the Chateau dominating the landscape. It’s incredibly elaborate and overdone. Talk about a lot of bragging!

But whilst the outside is incredible in regards to it’s size, height, engravings, carvings and stonework, the inside is relatively bare. Chambord could never really be used as a proper castle to live in for long periods of time, its sheer size meant that keeping it warm was virtually impossible.

Hence it’s no surprise that most of the castle remains unfurnished. You will find some paintings and artwork scattered through the castle but don’t expect the beautiful tapestries, furniture and paintings located in Chenonceau or Cheverny.

The highlight of Chambord for me was climbing to the top of the castle. From here you were able to get a great view over the rest of the region. It’s here where you’ll realise the sheer size of the grounds of the castle. The top of the castle is also the perfect place to admire the work of the many towers that make up la Chateau de Chambord.

By the third chateau I was absolutely exhausted. As soon as I got into the van for the long ride back to Paris I was asleep, and I didn’t wake up until we arrived in the city.

I was so wrecked that I didn’t even bother keeping my dinner reservation and instead choose to order in takeaway to my hostel, where I proceeded to sit in bed and watch movies before going to bed at 9pm!

Yes the day was exhausting but it was also one of the best days I have spent in France to date. And I’ve spent a lot of days exploring this beautiful country!

Why is the price so reasonable?

When I did the maths I realised that I wasn’t paying much more than I would have if I had done this tour independently. Entrance to all three of the castles would have cost me roughly €35 to begin with.

I doubt I would have been able to hire a car, pay for petrol, pay for toll roads and pay for parking for anything less than €70.

Hence if you can’t split car costs with other people, a €115 is one of the cheapest, and most definitely the easiest ways to get a short taste of the Loire Valley.