24 Hours in Sydney: Eating My Way Across Sydney 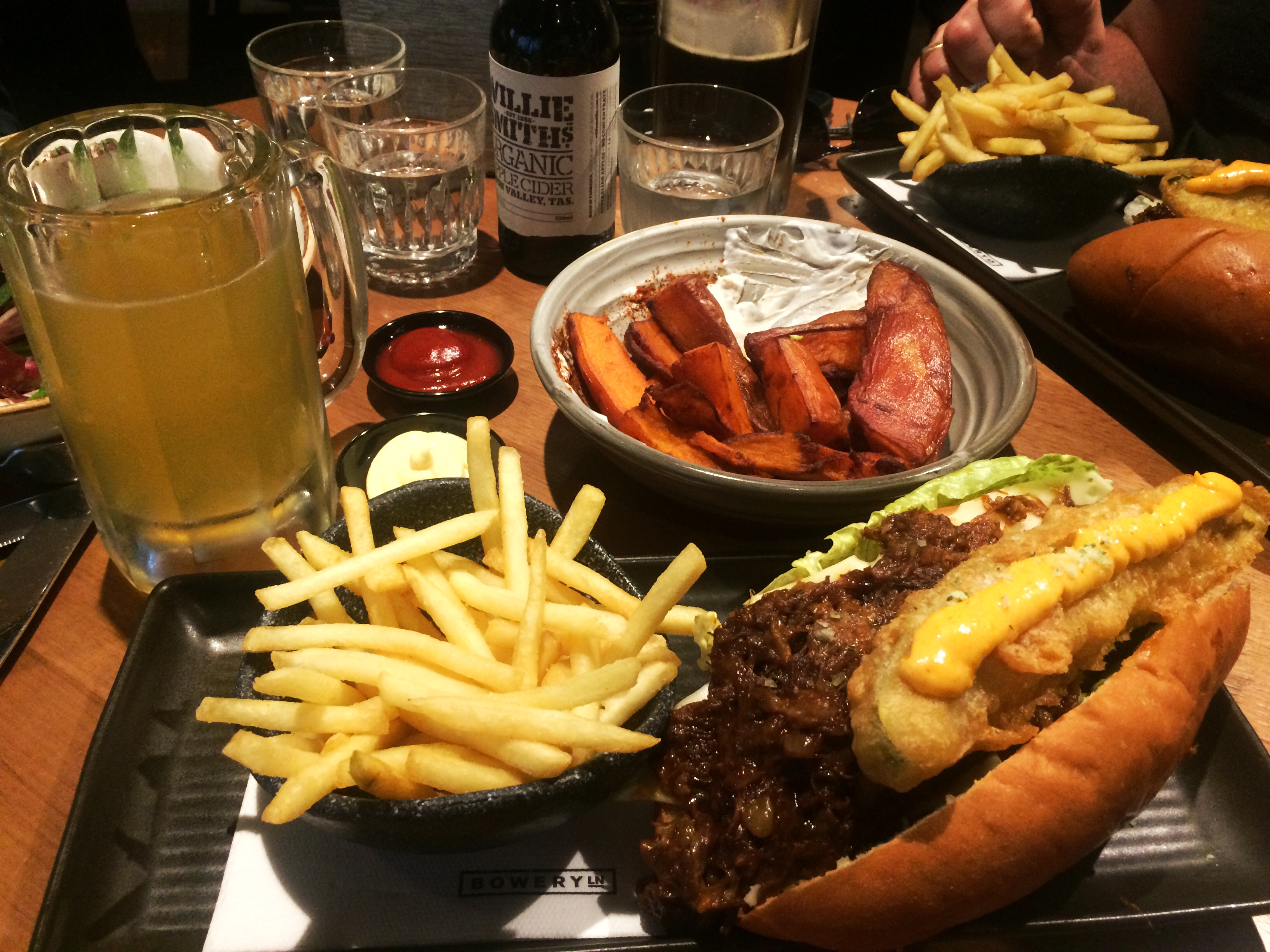 I had to fly up on Friday morning for a Visa Appointment for my French Working Holiday Visa. But given I’m taking work off to go to Brisbane next weekend, I couldn’t get the leave from work to extend my stay in Sydney longer than Friday. So I caught a flight back from Sydney at the hellish hour of 7am on Saturday morning.

24 hours is not a lot of time to spend in Sydney. I’ve been lucky enough to visit Sydney quite a few times already so I wasn’t interested in running around from tourist site to tourist site.

Instead I wanted to explore Sydney as a culture more so than a destination. I spent the day eating, walking across a very famous landmark and going to the theatre.

In the interests of not making this post incredibly long, I’m going to leave the things I did in Sydney for a later post. Today will just be about what I ate in Sydney!

I’ll be the first to admit that I’m a Melbourne Food Snob. Melbourne has both the superior food and the superior coffee. However I was willing to try what Sydney had to offer in the way of eating out.

The Sydney Food Scene and I didn’t get off to the best of starts.

After my Visa Appointment we wanted to go get some brunch. I was particularly craving some smashed avo, hopefully with some smoked salmon on the side.

A little research on Urbanlist’s best cafes in Sydney, pointed me in the direction of Bowery Lane.

We arrived at 11.20am and I was horrified and aghast to be told by the waitress that breakfast ended at 11.30am and they weren’t taking orders for breakfast anymore.

We definitely weren’t in Melbourne anymore. I don’t think a café here would dare to not serve an all day breakfast! However in Sydney it seems that every café stops serving poachies at 11.30am.

After I got off the shock and horror of being denied my brunch, I realised we had no other choice but to have an early lunch.

Bowery Lane is obviously a very hip and happening place in Sydney, as they were completely booked out but could give us a table so long as we would be out by 1pm.

I don’t mind having a time frame because it often means you don’t wait ages for food because they want you out of there!

What I immediately loved about Bowery Lane is the décor. It is really classy but boutique at the same time. It’s an odd mix between a beer lounge, tea house and upmarket restaurant and it really works.

What I also loved was their menu. I’ve found in most cafes and restaurants these days lunch is just an early extension of dinner.

You’ll find some smaller or cheaper versions of the dinner dishes, or dishes that you would typically eat for dinner.

Instead, Bowery Lane takes typical lunch fare like sandwiches and subs, and turns them into something different and exciting.

They also have a great variety of beers, ciders and wines. So even though it was only 12pm I started off my meal with a beer glass full of cider. It was just what I needed after the stress of a delayed plane and almost missing my appointment at the French consulate.

I ordered the Sloppy Joe Sub. It was a sub full of slow cooked, beautifully marinated beef that melted in your mouth, with salad, a giant fried pickle, avocado and chipotle mayo.

It was super delicious especially when paired with fries dipped in aioli, and the side of sweet potato fries with whipped labneh and pumpkin seeds that we ordered.

My mum ordered the poached chicken salad which was pretty delicious- for a salad anyways. I’m not a huge salad fan unless it’s like 75% goats cheese!

Our Sydney food adventure continued that afternoon with a trip to Picollo Me. I’ve been following this café on instagram for a while now and have been really excited about the different and adventurous dishes they have been creating.

They actually serve a burger in a croissant. This sure is not the place for healthy or clean eating that is for sure!

However there was one dish I had had my sights on for a while- the deep fried nutella icecream with caramel sauce and malteasers.

We arrived at 3.10pm- almost 50 minutes before their closing time of 4pm and to my horror I was told they had stopped serving from the dessert bar because they were closing “soon”. What the hell is with Sydney and their silly serving practices!

After kicking up a bit of a fuss I was rewarded with my icecream! The dish itself was pretty delicious.

The crumb around the icecream had a great flavour but it didn’t have the typical golden colour, crunch or even heat of the fried icecream I’ve had at other places.

The icecream itself isn’t pure nutella icecream but rather vanilla with chocolate bits in it.

The whole dish was sickly sweet, which was to be expected and I definitely felt more than a bit sick after finishing it. But that might also have been from not having any sugar for a couple of weeks.

My final opinion would be that it is a yummy and novel dish to try, but probably way more hyped up than it deserves. As is often the case with some clever marketing on instagram!

I also tried the Picollo Me Nutella Bomb which is a hot cup of milk that comes with a block of nutella that you stir into the cup.

It was a rather cool and novel idea! But even though I can handle dishes like icecream in small doses, I’m slightly lactose intolerant and will get a very upset stomach from large glasses of milk. Hence I ordered this drink with Soy Milk.

I actually usually really like Soy Milk but unfortunately Picollo Me hasn’t invested in Bonsoy, one of the only tolerable brands of Soy Milk that is pretty much a staple in Melbourne cafes.

Whatever brand they used was pretty yuck so I didn’t really enjoy this drink at all. I could admire that the flavour of the bomb might have been delicious in some normal milk (or some Bonsoy!), although again it is a pretty rich and sickly sweet drink!

As you can imagine, I was pretty full after my afternoon of eating and didn’t really feel like eating anything else before going to the theatre that night.

Instead we decided to eat after our show finished at 10pm. Given the late hour and my previous run ins with Sydney’s weird food serving hours, we weren’t prepared to travel off to some direction in the city in search of food.

Instead we grabbed a quick dinner at an Asian style restaurant at the casino.

The food here was fine but nothing to write home about. I ordered the peking duck pancakes and it was tasty but not incredible. Although 5 stars to the waiter who was proactive enough to bring me extra hoisin sauce when he saw I was running out!

I also have to admire any place that serves one of my favourite wines; Squealing Pig Pinot Noir!

Want more recommendations of where to eat in Sydney?

You can read this post I wrote last year, also about eating in Sydney!

Bowery Lane is located in the CBD and is an easy enough walk from anywhere in the city. You’ll find it over on O’Connell St.

The Sloppy Joe Sub cost $22, the cider $8 and the side of sweet potato fries $12. However there are a range of price points from $17 for the Rye Sandwich to $55 for the Lunch set menu.

They have stores across Sydney, but if you are after the deep fried nutella icecream it is usually at the Pitt St or Hunter St stores. It’s best to send them a comment or message on instagram on the day you want to go and they can confirm you are selling it. The bomb was $3.50 and I think the icecream was $10 (I didn’t get an itemised receipt).

You’ll find this one right inside Star Casino in Pyrmont.

A main meal and a glass of wine will cost around $30.