Eating Live Octopus at the Noryangjin Fish Market in Seoul 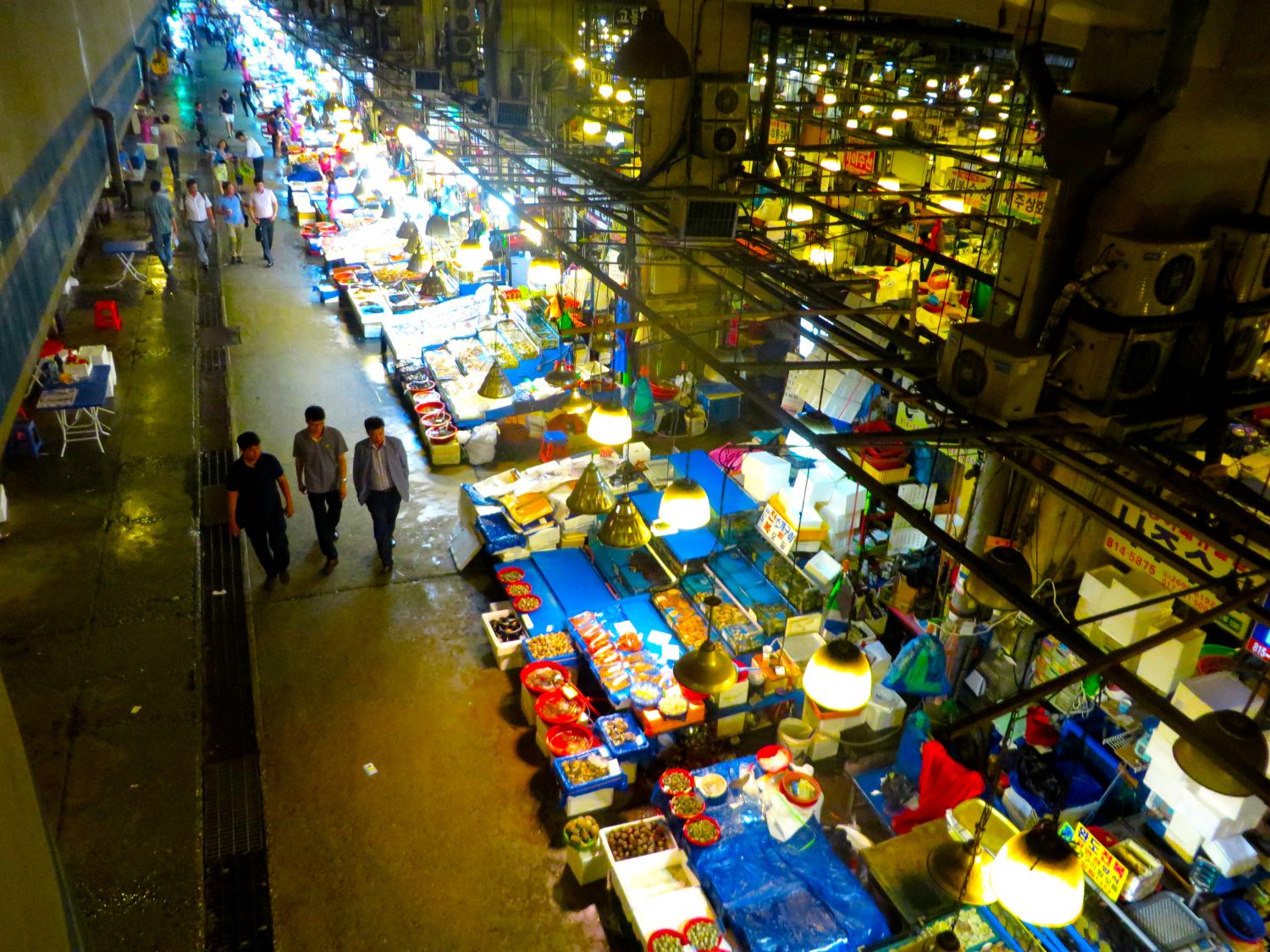 I’m obsessed with seafood. If I had to pick one food group to live off for the rest of my life I would not hesitate to answer with seafood.

Seafood reminds me of Christmas dinners growing up, of my Yia Yia’s fish soup and nights learning to shell prawns with my Pa. And well there is also the fact that it tastes amazing!

Thus when I was researching things to do and see in Seoul and I happened across the fish market it went to the top of my list of must sees in Seoul.

The Noryangjin Fish Market isn’t just about stuffing your face with amazing fish- it’s a cultural and very Korean experience in itself.

The fish market is used by all the locals in Seoul and if you arrive at around 2-4am you’ll be able to witness the seafood auctions. Not being a morning person I was not keen for this so we chose the next best time to visit- at night.

Around 8pm you’ll find lots of Koreans purchasing their seafood and eating it at the restaurants while drinking Soju.

It’s really easy to get there. We got the ever efficient Seoul subway to Noryangjin station and then you just need to follow the signs across the bridge to the fish market.

The fish market is open 24 hours and no matter what time you enter you will find it bustling. Immediately upon entering we were overwhelmed by the number of stalls, the lights and the buzzing of all of the tanks.

We spent about 15 minutes just walking down past all the stalls. All of the stalls were full of tanks of live seafood- baby octopus, giant crabs, fish of all size and species, different kinds of scallops, mussels and types of shellfish we had never even seen before. Lying on ice at most of the stalls is also different types of prawns and even some salmon steaks.

We already had a plan of what we wanted to purchase to eat. Consensus was for some fish, lots of scallops and prawns, oysters and of the course the live baby octopus that is a Korean delicacy.

It was overwhelming trying to pick a vendor to buy from but we managed to find two close together, one where we bought some flounder and cod from and another where we managed to get some scallops, prawns and baby octopus.

Unfortunately we were unable to find oysters- they must be having a bad season or something because a lady told us through animated mimeing that they would make us really sick.

The best thing about the Seoul fish market is that purchasing your seafood is only half of the experience. It wasn’t like we were going back to our guesthouse to try and cook it on the hot plate there! Instead we were pointed in the direction of the many restaurants on the second floor of the fish market. These restaurants will cook all your super fresh seafood for you.

We were seated at a restaurant and then blatantly ignored for about 10 minutes. Having enough we got up and went to leave to the sudden dismay of the staff in the restaurant. One guy came up to us and after haggling for a price and agreeing to stay he quickly pronounced ‘I love you!’.

It became a hilarious thing for the rest of the night and everytime he came past our table we would say ‘I love you’ to each other! And we even managed to get a hug and a photo with him when we left at the end of the night (at which point we were quite intoxicated).

We decided to eat our fish the traditional Korean way- its called Hwae. Upon purchasing our cod and flounder , the vendor chopped it up into sashimi for us and promptly handed us a plate full of the thinly sliced fish along with some pickled ginger. We were also given the leftover fish bones in a plastic bag.

When ordering at the restaurant we gave them the prawns, scallops, live baby octopus and fish bones to prepare.

We first started with the sashimi while we waited for our other dishes to be prepared. Unike the Japanese who serve their sashimi with wasabi and soy, the Koreans prefer to eat there sashimi or ‘hoe’ as it is called in Korean by wrapping it up in lettuce leaves with this amazing sauce you seem to find everywhere. We ate the sashimi both ways- Japanese way with wasabi and the Korean way.

The next to arrive was the dish that had pointed me towards the fish market in the first place- Sannakji.

Sannakji is a baby octopus sashimi. You buy the baby octopus alive and then they chop it up before immediately serving it to you. The octopus itself is dead but the nerves in the octopus are still moving.

You dip the still wriggling tentacles in sesame oil before eating them. Make sure to chew because otherwise the tentacles have been known to stick to people’s throat and in some extreme cases actually strangle them.

I was super apprehensive about eating the Sannakji but equally as determined to do it. Part of travel for me means pushing my own personal boundaries and eating this dish was definitely one of those moments for me!

After I got over the fact it was still moving in my mouth and actually managed to chew it the flavour was pretty nice. Obviously it was super fresh and a bit chewy. I don’t think I’d dig into it again but it was worth trying for the experience!

Here is a video of me eating the Sannajki at the fish market and another of much later and far drunken when I finished off the octopus head (word of advice- don’t do this!).

In terms of the other dishes the scallops and prawns were superb. Everything was amazingly fresh, with most of it being picked alive by us just 10 minutes before.

Towards the end of the meal they bought the fish bone soup out for us too and the taste of this was also great- it kind of reminded me of a fishy curry laksa.

Along with our beers and soju (hence the drunkenness), the cooking and cost of the seafood came to about 35000 won or about $45 each. Considering how delicious and fresh it was we thought it was well worth the splurge. We definitely wouldn’t get this much fresh seafood for $45 in Australia!

Visiting the Noryangjin Fish Market in Seoul was one of the best things I’ve done so far during my time in South Korea and I would definitely recommend it for all seafood lovers!

Where Should I Stay in South Korea?

If you are a budget traveller or are just looking to make some friends, I always recommend staying at hostels. I stayed at Pencil Guesthouse and Hostel in Hongdae and it was superb!

What to Eat in Portugal: My Food Guide for Lisbon and Porto