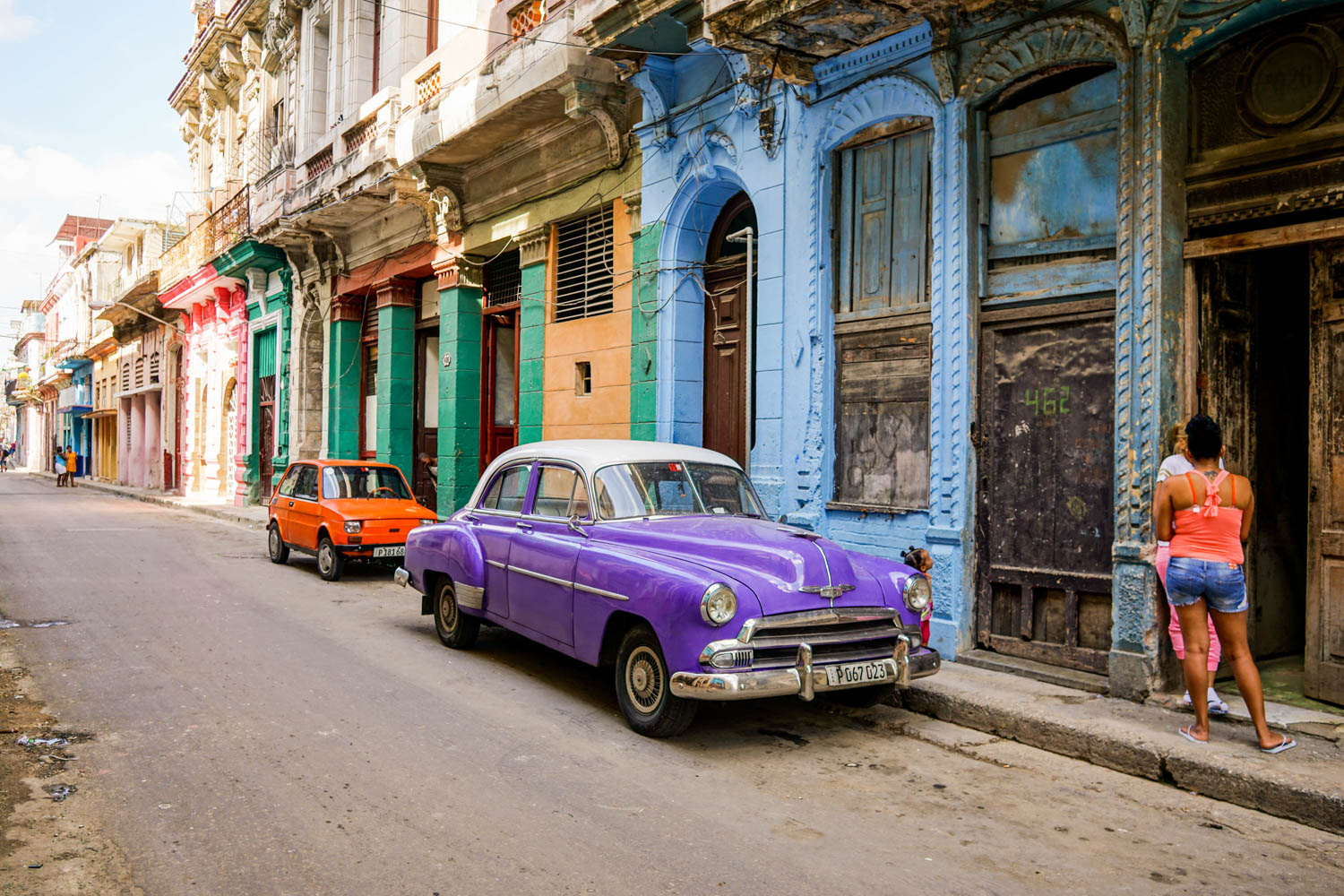 November 2016 is going to have to go down as the worst blogging month ever. Between 8 days of being offline in November, and a crazy two weeks of partying in Colombia- I just put the whole blogging business at the bottom of my priorities list.

I didn’t even make up for it by posting to Instagram or with regular snapchats. I’m terrible. And I’d promise to make up for it next month but I’m not sure that’s a promise I can keep. The backpacking world of South America is so different to Europe. It’s a vortex of partying, travelling with people and chilling out which doesn’t leave a lot of time for anything else.

But other than being a lazy blogging month, November was one of my favourite months of the whole trip. I celebrated my one year travel anniversary on the 22nd of November! And I visited not just one, but two countries that have skyrocketed to my top five favourite in the world. Cuba and Colombia were both incredible!

Celebrating the Day of the Dead in Oaxaca- my whole trip to Mexico was timed around being in Oaxaca for the annual Day of the Dead celebrations at the very start of November. This is one of the best places to be in Mexico for the festival and it didn’t disappoint. Street parades, elaborate face painting, overnight vigils at decorated graves and amazing dancing formed just some of the amazing ways the people in Oaxaca honour their dead. Being a part of these celebrations was a very special moment.

Rest and Relaxation on Isla Mujeres- Whilst in Oaxaca I found myself hitting a massive travel wall. I was exhausted, unmotivated and even the idea of sightseeing was destroying me. I just wanted to lie in bed and read all day, every day. Hence I made the spur of the moment decision to cancel our plans to San Cristobal de las Casas and Palenque and instead head to Isla Mujeres to spend a week on the beach. It was the best decision I could have made. It really recharged me and the island is paradise!

Cuba!!- It’s official, Cuba is my new favourite country in the world. I’ve actually been super surprised to realise through my travels in Colombia that Cuba is a polarising destination. It seems everyone I talk to either completely hates it or is completely in love. I fell into the completely in love category, obviously. What makes this country so special is the people in it.

They are all super friendly, super happy and there are lots of opportunities to interact with them. We met some Cubans at a bar and spent the whole night with them and we got cheap accommodation by staying in homestays and fell in love with our Casa Mamas. Not to mention that Cuba is home to the most gorgeous men in the whole entire world- who were more than willing to teach my uncoordinated and clumsy ass how to salsa. Cuba was also a refreshing change from solo travel as I travelled with two friends who loved the country as much as I did.

Colombia- Colombia is a very very special place. It’s probably the only place in the world where the tourism industry is almost only backpackers. There are a few ‘tourists’ on stopovers in Bogota and some hotels in the centre of Cartagena. But for the most part, the country is full of backpackers and hostels. Whenever I flew between cities I only met backpackers (or Colombians), when I jumped on buses I only met backpackers, and when on walking tours or organised tours I only met backpackers. I guess we are the only ones brave enough to come here at the moment, which is sad because its such an amazing and diverse country. I loved every part of Colombia from the backpacker heaven full of amazing nightlife and culture in Medellin to the beaches of the Caribbean Coast. It is also one of those destinations where you find people going to the same places and end up with travel buddies for more than a week! I only wish I had another of couple of weeks here!

La Mercado de 20 Noviembre in Oaxaca- this place is street food heaven. It’s a market full of vendors selling amazing street food. We ate here for almost every meal and tried some amazing local dishes including the famous mole negra- a chicken Mexican curry made with chocolate (cocoa!).

La Lomita on Isla Mujeres- We ate at a lot of different restaurants during our week on Isla Mujeres, but once we discovered La Lomita it was very hard to eat anywhere else. This Mexican eatery was heaps cheaper than many of the other options on the island and the best food I had in all of Mexico. The enchiladas verdes filled with ground pork were out of this world delicious, as were the crispy coconut prawns and their ceviche!

The best brunch since I left Australia at Lola Valentina- Another one of our favourite places on Isla Mujeres, Lola Valentina served up the best brunch I’ve had since I left Melbourne. And if you know anything about Melbourne brunch culture at all, you know that is a very big thing! Their version of eggs benedict- two perfectly poached eggs on southern cheese biscuits with spicy hollandaise, guacamole and salsa was ridiculously delicious!

Witnessing a terrible accident in Medellin- I had just landed in Medellin, one of my favourite cities in Colombia and was en route from the airport into the city when our bus happened upon someone that had been thrown off his motorbike. The accident was terrible- the poor man was essentially a pancake on the road and although I’d like to deny it he definitely wasn’t alive.

Road rage in Medellin- I was in a taxi on the way home from a big night out with some guys from my hostel when we were involved in a road rage incident. Our taxi driver ran a red light and the motorcyclist he almost hit started to drive alongside us and yell at him. Our taxi pulled over and went for something (presumably a weapon) in the boot of the car, while the guy on the motorcycle pulled a gun from his fanny pack. We quickly jumped out of our taxi and walked the rest of the way home.

Travelling South America is definitely cheaper than travelling in Europe. But in comparison to the rest of the region, Cuba was very expensive mostly due to the special currency that is used by tourists. My expenses were also slightly higher than expected this month because of the decision to spend a week on the slightly pricy Isla Mujeres rather in the very cheap region of Chiapis. The other major budget killer in Latin America is the flights- I do miss Ryanair and cheap buses in Europe! But I’m quite happy with how the spending went this month!

As always you can see all the expenses here.

I’ve already talked about how terrible my posting schedule was this month! I am well and truly behind now. Hopefully I can start to catch up soon, especially with some more downtime coming up in my travels.

What to Do in Dublin, A City After My Own Heart

P.S. I Love Ireland… My 9 Day All Ireland Paddywagon Tour

Every Show I Saw At the Edinburgh Fringe Festival

One beach day left on Isla Mujeres and then I am swapping the relaxing vibe of the island for the hustle and bustle of Havana. So glad I decided to come here and feeling so refreshed and ready for the challenges of travelling Cuba!

Just made it back to Mexico where the wifi is plentiful so I can finally start posting my photos from Cuba! The past 10 days in the country have been nothing short of amazing. I’ve fallen madly in love with the people, the culture, the music and the cool vibes. I’ve got to say Cuba is my new favourite country! The only bad thing was having to leave 🙁

Exploring the national park around Vinales on horseback was one of my favourite days in Cuba! It’s not all about wandering small streets and old cars.

A few days ago I was feeling unmotivated, lethargic, sleepy and restless. I could hardly gather the energy to head out to the Day of the Dead Celebrations in Oaxaca, something I had been looking forward to for so long. The symptoms of travel burn-out are well known to me. So I made the decision to skip my trip to Chiapis and instead fly back to Cancun to spend a week on nearby Isla Mujeres. And so far it is perfection!

December is going to be a huge month exploring Colombia, Ecuador and Peru. I’m beyond excited to be going to the Galapagos Islands to hopefully see some amazing wildlife. This month I’ll also be heading to Banos in Ecuador and Mancora and Lima in Peru before travelling deep into the Amazon rainforest to celebrate the New Year in a tiny lodge. I can’t wait!