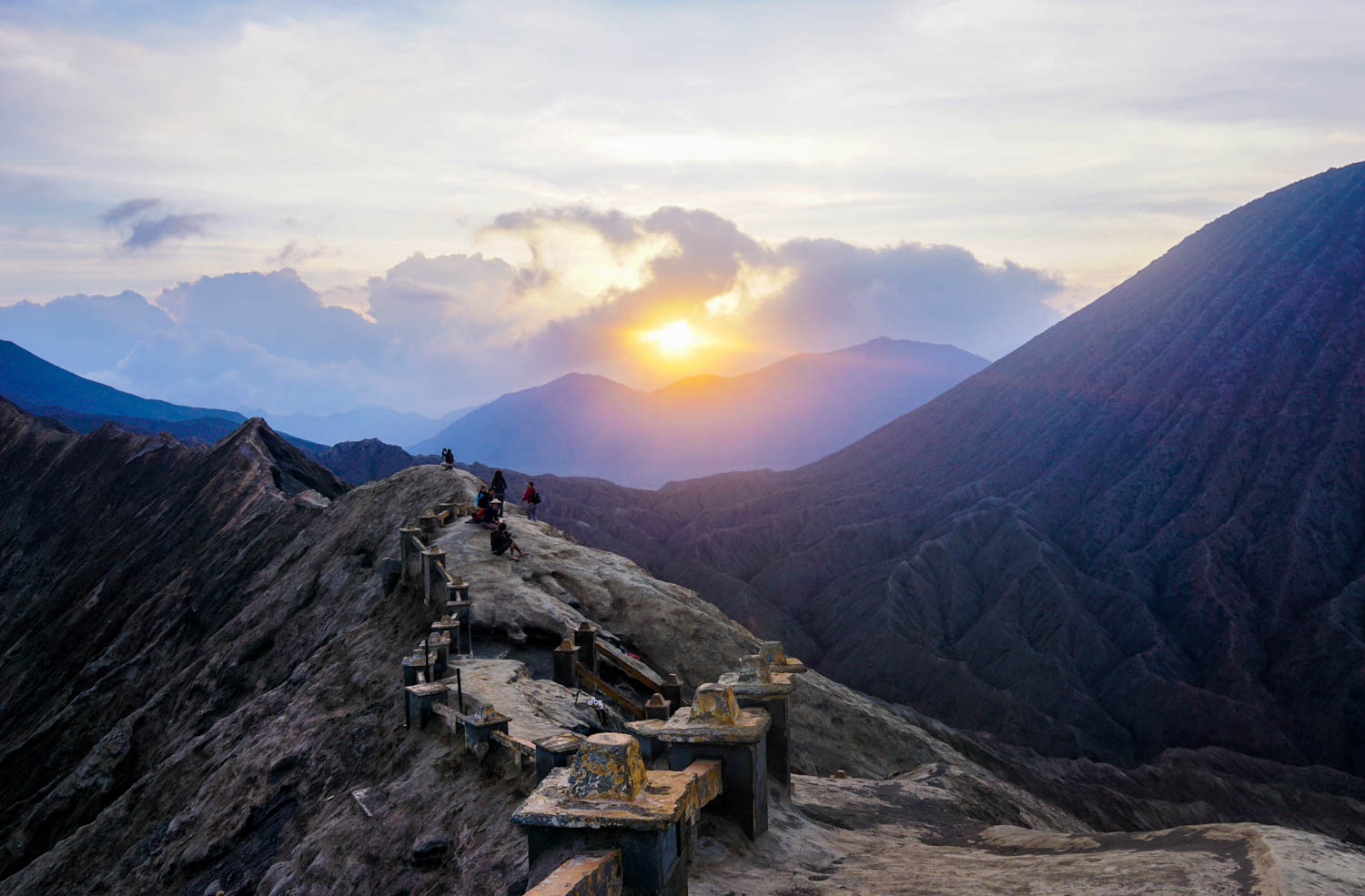 I only visited one country in September; Indonesia. Indonesia is such a huge country, and I used the full 30 visa-free days that the Indonesian government gave me to see as much as possible. I feel like I only touched the surface.

For most Australians, Indonesia means Bali and lots of terribly embarrassing drunk Australians on a cheap holiday. It’s our Cancun or Magaluff. It means that Australians either go to Indonesia to visit Bali, or they dismiss the country as a whole because of the reputation Bali has. In my whole month in Indonesia, I only met two other Australians in hostels- backpacking Indonesia doesn’t seem to be a huge thing for Aussies to do.

Hence one of the aims of my trip to Indonesia was to showcase places that most of my friends wouldn’t have heard of. I hiked volcanoes and visited one of the biggest Buddhist temples in the world on the island of Java, I visited the lesser known Balinese spots of Pemuteran and Tulamben to do some incredible diving and I marvelled at the Komodo dragons and the crystal-clear water in Komodo National Park near the island of Flores. I also did the very Australian thing of getting very drunk on the Gili islands and in Seminyak, albeit with a bunch of Brits rather than my fellow citizens.

Borobudur Temple near Yogyakarta- I think even those suffering from the worst kind of Asian temple fatigue would love this site. The stupas of Borobudur were ridiculously incredible and I could have spent all day wandering around this amazing site. Even the early morning wake up call to be at the temple just after sunrise couldn’t take away from how much I enjoyed the beauty and history of this place.

Mt Bromo- hiking to the crater of Mt Bromo for sunset must be one of my favourite travel moments ever. It was my very first volcano and I was overwhelmed by the sheer sound of the crater as we arrived at the top. Sitting at the top and watching the sunset was simply breath taking, even if the motorbike taxi home across the dark and sandy plain almost killed me. We topped off an incredible visit to Mt Bromo by hiking up a nearby mountain at 3am the next morning to catch the best sunrise I have ever seen over the volcano and other nearby mountains.

Meeting so many incredible people while partying on the Gili islands and in Seminyak- It is usually easy to meet people on the road in hostels, but nothing forges a friendship more than a night out of drunken rivalry and dancing. The partying on Gili T and in Seminyak was awesome, even if it absolutely destroyed my travel budget. I met people that I know will be friends for life!

Komodo National Park- I spent a whole week on the island of Flores, doing day and overnight trips to Komodo National Park. I spent my first three days doing 9 dives with Uber Scuba and all the dives were the best I have done. In some places the visibility was close to 40m! At another site, we sat at the bottom of the water and watched four huge manta rays swim above us. I also did an overnight trip on a tiny fisherman’s boat where we slept under the stars and finally got to meet the fierce Komodo dragons.

Watching the Tigers win their first premiership in 37 years! There are very few times when I wish I was at home rather than on the road. But when the siren went to end the 2017 AFL Grand Final and my team had won, I wished I was watching from the MCG rather than on my laptop in a hostel in Komodo!

Being selected as a Castan Centre Global Intern- earlier this month I got an email that was literally life changing. I had been selected by the Castan Centre for Human Right as one of their 2017/2018 Global Interns and I would be receiving funding of $7000 to go to Johannesburg to go do legal work on human rights cases. The internship doesn’t just give me an opportunity to extend this trip to August 2018, but is something that I am deeply passionate about. I can’t wait to hopefully make some kind of a difference in South Africa!

Sate from Sate Ayam Podomoro- I absolutely love chicken satay and the satay I had at this little restaurant in Yogyakarta is the best I have ever had. The chicken was cooked perfectly, the peanut sauce was well balanced and full of flavour and it came with the typical sides of chili, lime and red onions. I ended up eating there four times in four days!

Eggs Benedict from Mowies l in Gili Air- Mowies and their incredible menu had me wanting to extend my stay on Gili Air just to eat there. I ate their three times but two of those times I ordered the same dish- the Eggs Benedit. Mowies version is bubble and squeak with smoked salmon, two poached eggs and hollandaise. It’s the best brunch I’ve had since leaving Melbourne.

The Fish Market in Labuan Bajo- Labuan Bajo in Flores is full of touristy, overpriced restaurants. But the best place to eat was the fish market. Each little vendor has an assortment of freshly caught fish at different prices. We just selected what we wanted and they grilled it up for us and served it with an assortment of vegetables, rice and spicy sauce. One night we ate the Mahi Mahi which was delicious, but the highlight for me was the night we ordered the snapper. When we selected, it we could tell just how fresh it was and it was cooked perfectly.

The day from hell in Nusa Lembongan- Sometimes on the road you just have a day that breaks you. My day from hell started with the worst boat ride ever from Gili Air to Nusa Lembongan. It was delayed more than two hours and the sea was so rough that the coast guard would never have let our boat leave if we were in Australia. We battled through 2-3 hours of rough seas and I thought we were going to drown the whole entire time. We arrived so late that I had to rush to the dive shop to check in otherwise I wouldn’t have been able to dive the next day. But I was then told that I had to prepay (which I hadn’t had to do so far while diving in Bali). I was wandering around aimlessly looking for what had to be a non-existent ATM when a dog tried to attack me. I was only saved when its owner heard me screaming as it was snarling and running after me on the beach. I then proceeded to wander around, sobbing while still looking for an ATM which took me another hour. To top it off I woke up the next morning with a terrible cold. Travel days couldn’t get much worse than this one.

I absolutely blew my budget in Indonesia. It was way more expensive than I thought it was going to be, especially in places like Bali and the Gili islands. Majority of my money was spent on diving which was well worth the expense. The other was spent on expensive meals and alcohol. I could have done things cheaper if I ate more locally but Bali especially was home to some great Western restaurants that I just had to try. That’s not to say I didn’t have my fair share of sate and nasi goreng. Indonesia in general was just more expensive than other places I have visited such as Malaysia.

As always you can see all of my expenses here.

As usual I’m still far behind. I had a great publishing rate earlier in the month but that fell away when I started socialising and having too much of a good time on the Gili islands. Hopefully some quieter times in China over the next few weeks can give me an opportunity to write some more.

8 Reasons Why Cusco is My Favourite Destination in Peru

I’m not at all surprised that most of these are from Mt Bromo!

I feel like this photo sums up my life completely- constantly moving forward. And on that note I’ve got some pretty MASSIVE news to share! When I left Australia in June I only planned on spending 8 months in Asia before heading home. That was until the Castan Centre for Human Rights selected me (and offered me a very generous scholarship) as one of their seven Global interns to go do human rights legal work at the Southern African Litigation Centre in Johannesburg!! I’ll be flying straight there from KL in early February and spending three months in SA before hopefully having enough money left to go travel around Africa for 2.5 months. So see you in August 2018 Melbourne!! Whilst the internship gives me an opportunity to keep travelling, I’m most excited about being able to work with an organisation that does amazing work on improving human rights in Africa. Basically this opportunity combines two of my great passions; social justice and human rights, and travel of course!

The most beautiful sunrise I have ever seen… ??

Watching the light change as the sun appeared over Mt Bromo was an incredible experience. The sort of beauty that gives you a rush of energy just for having experienced it. Moments like these are what travel is all about for me ❤️❤️

Arriving on the volcanic crater of Mt Bromo just in time for sunset was incredible! I managed to snap this photo before the sun disappeared behind the clouds.

Who knew exploring a pine forest was something I’d be doing while in the ancient town of Yogyakarta, Indonesia. Such a random day biking out to this photogenic place.

I’m starting October with 10 days travelling through Myanmar. I’ll then be meeting my Nan in Beijing to spend two weeks exploring a few places in China before flying to Bangkok and heading straight to Cambodia to finish out the month.