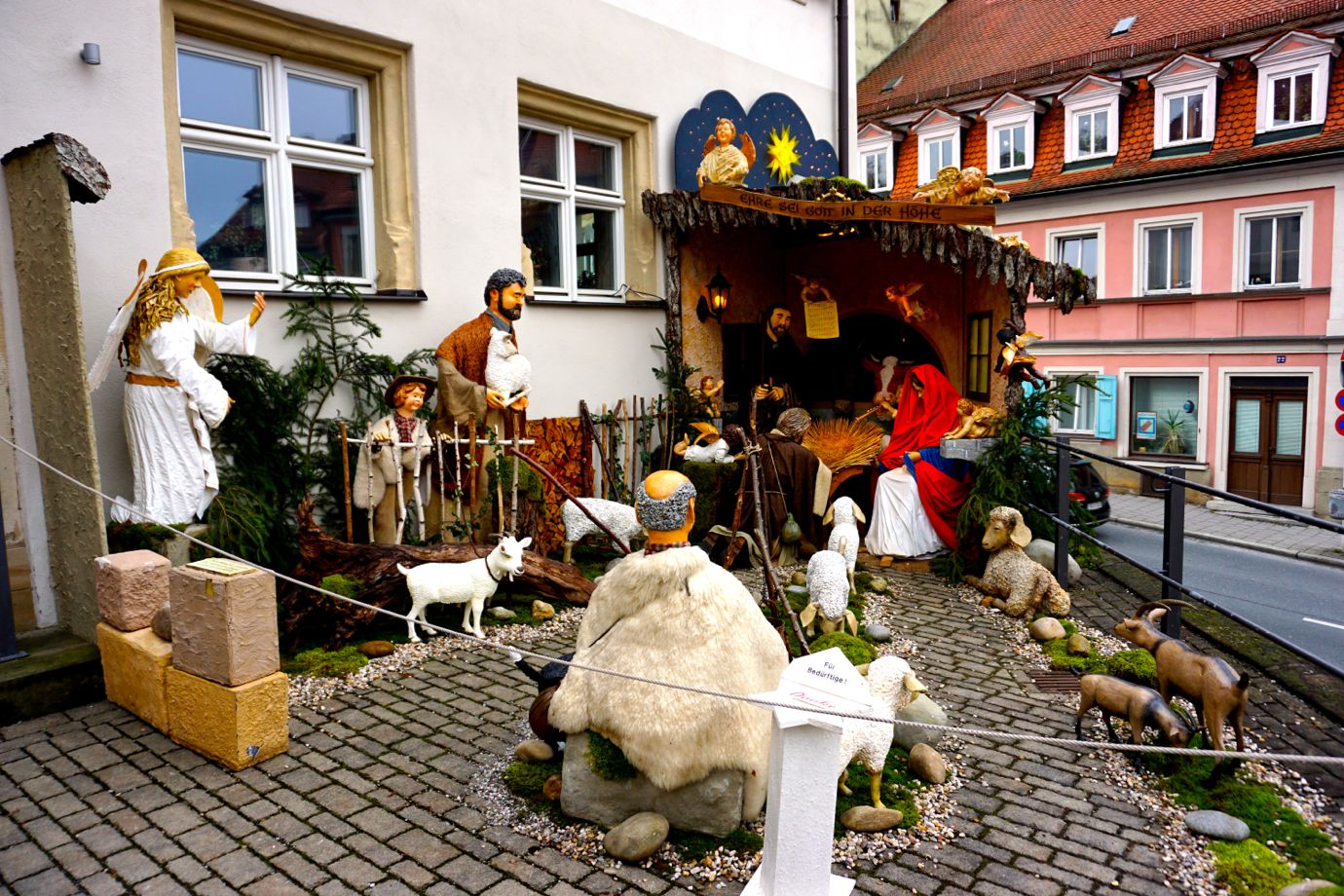 Visiting Germany in December gives you plenty of opportunities to get into the Christmas spirit. Even the smallest towns are home to a beautiful Christmas markets where you can drink favourites like mulled wine and eat your weight in delicious treats like sugar covered nuts, bratwurst, hot chestnuts and chocolate covered fruit.

But after a while all of the Christmas Markets do seem to blur into one. A different Christmas market might come out and catch you by surprise with it’s unique theme, like the medieval market in Munich did for me. Hence I loved exploring a different Christmas tradition in the small Bavarian town of Bamberg; the nativity scene.

Unbeknownst to me, the good old nativity scene is actually taken very seriously in Germany. People collect ones that are almost a thousand years old, they join clubs or organisations of nativity scene makers, and they even go to workshops on how to make the perfect nativity scene. This obsession with the nativity scene is at it’s most extreme in Bamberg which is often dubbed ‘the Nativity Town’.

Throughout the city you’ll find collections of nativity scenes and exploring all of the nativity scenes Bamberg offers is a great and unique way to explore this amazing UNESCO World Heritage listed town.

By far the best place to see nativity scenes in Bamberg is at the Nativity Scene Museum. This museum is actually privately owned; it belongs to a man who developed an obsession with nativity scenes at an early age, and has been collecting ever since.

Every year during the Christmas period he sets the museum up in a new way and opens his doors for you to have a peak at his enormous collection from all around the world. Such is his obsession; he has actually spent decades crafting his very own nativity scene.

Every year, during advent, this museum is home to a special nativity scene exhibition. It’s usually nativity scenes from the private collection of a few local families, so every year you’ll find something different.

The most unique nativity scene of my whole trip to Bamberg was this particular one, which is actually made from old wooden clothes pegs! I love how bright, colourful and fun it is as well.

Bamberg’s obsession with Nativity Scenes means that you can be walking along, exploring the beautiful city and just randomly happen upon one that has been created and funded by a local community group.

We were on our way to visit one of Bamberg’s beautiful churches when we stumbled along this huge nativity! You can probably notice that baby Jesus is missing from this particular scene. In Bamberg, Jesus won’t take his rightful place in the crib until the 25th of December!

Bamberg is home to many beautiful churches, and all of these churches have their own huge nativity scenes.

The best thing about the church nativity scenes is that they tell a different part of the Christmas story, with the scene being changed every week.

I must have been visiting around the time that they are changed because some of the scenes still told the story of the Angel coming to Mary to tell her she would have Jesus, while others told the next part of the story.

The state museum also has a special nativity scene exhibition in December, although it is slightly smaller than the collection in the history museum.

This year, the state museum was home to a large nativity scene that light up at various stages to show the Christmas story. At this point I might have gotten a bit sick of nativity scenes but I could still admire how interactive this exhibition was. This would be especially good for anyone travelling with children!

The State Museum itself is also worth visiting because of the amazing and historical building it is housed in; The Rathaus/Townhall. You can go upstairs to see the old meeting room of the Rathaus and you’ll find an awesome collection of porcelain pieces. I especially loved the porcelain chess set!

I’m not a religious person. In fact I’m probably one of the biggest atheists. But that doesn’t mean that I can’t enjoy nativity scenes, or Christmas, or even visiting old cathedrals and churches.

Whilst they do have a religious element, as an historian I enjoy them for their historical element. A 1000 year old nativity scene is amazing regardless of whether I believe in God or not!

Most importantly, they are a huge part of the culture of Bamberg and the town itself. Thus regardless of your faith, visiting the nativity scenes in Bamberg should be a part of any December trip to this town!

Note: I was a guest of Bamberg Tourism who helped me with my visit. But as always all opinions and post ideas are my own.