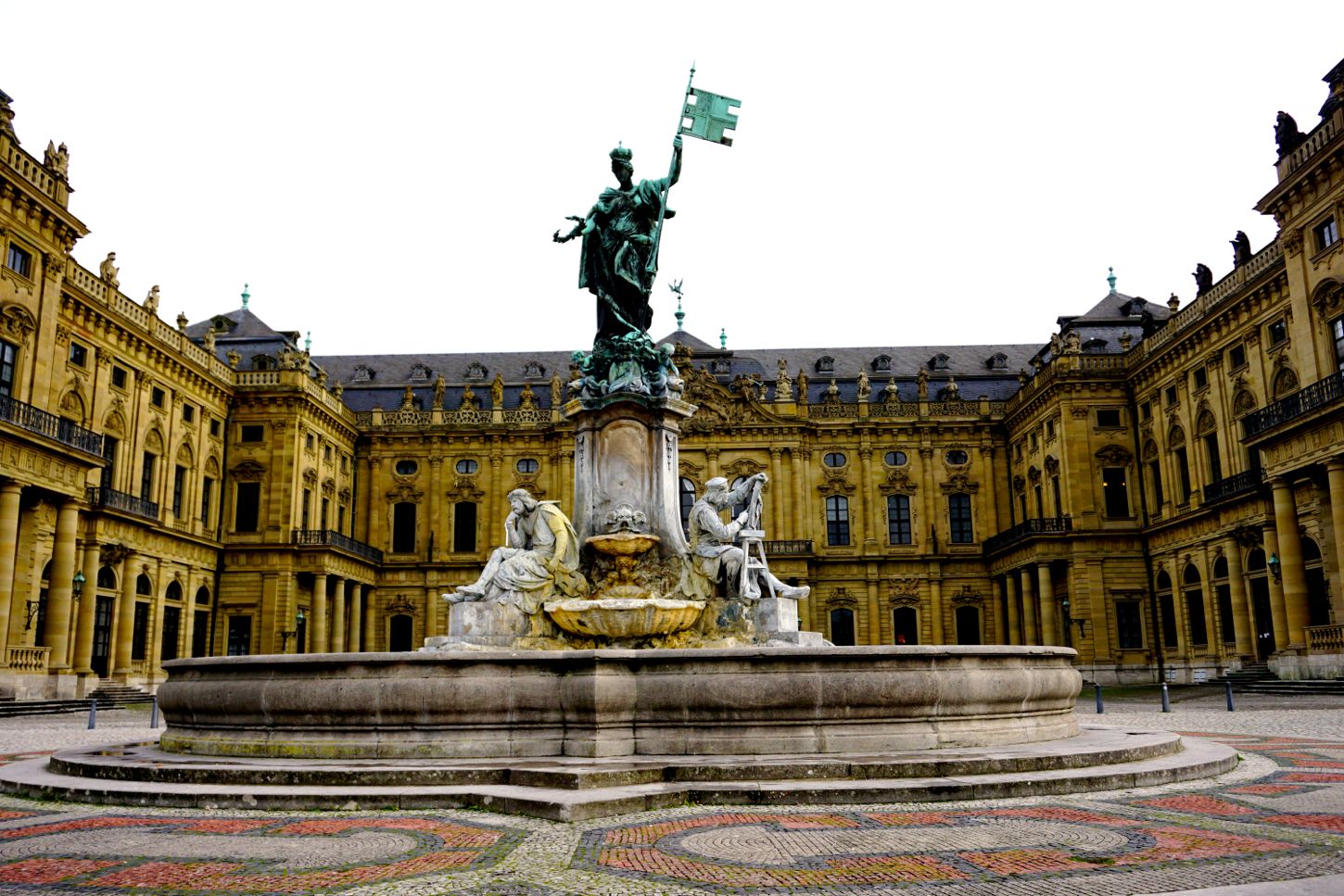 Wurzburg was my very last stop in Bavaria before I headed further North to the Rhineland.

My decision to stop in Wurzburg was dictated by one reason; the UNESCO listed Wurzburg Residence. But although I only stopped over to visit the one sight, I found myself surprised by what is essentially a city.

Wurzburg surely didn’t have the old quaint charm of Regensburg or Bamberg, but after visiting very small towns I found myself revelling in the buzz of this city. Whilst I would absolutely count Bamberg as my favourite small town in Germany, Wurzburg is the one that I’d probably pick if I had to live somewhere in Bavaria.

It didn’t take very long for me to get to Wurzburg from Bamberg, the train was direct and less than an hour. Best of all, I didn’t have to pre book a ticket. I just rocked up at the station and purchased something similar to the Bavaria ticket that allowed me unlimited travel in the region for the day.

After meeting my couchsurfing host, a really cool thirty year old German guy that taught English in Wurzburg and had the most amazing DVD collection, I headed out to explore the city and most importantly the Wurzburg Residence.

By the time I walked the twenty minutes into town I was famished so I stopped at my favourite place for snacking in Germany in December; the Christmas market.

Other than my usual Christmas market favourites of Gluhwein, Rahmfleckr and chocolate covered strawberries, I lined up for a Bratwurst stand that came highly recommended by my host. He said to look for the place with a huge line and I couldn’t have missed it.

Despite the line their operation is swift and before I knew it I found myself digging in to a delicious bratwurst that was smothered in mustard.

I really liked the Christmas market in Wurzburg. Some of the ones in Vienna and Munich were crawling with tourists, and it was evident prices were high to reflect that. In contrast, the market in Wurzburg felt very local.

The Christmas market actually just popped up around the existing fruit and vegetable stalls that are there all year round. Not to mention the fast food like the Bratwurst kitchen that operates at any time of the year.

After stuffing my face I headed over to the Wurzburg Residence. I had about 40 minutes before the English tour so I decided to head up and start to explore the place myself before it started.

The Wurzburg Residence was unfortunately badly damaged in the war with Wurzburg being one of the last major German cities to be bombed by the Allies. Luckily someone had the foresight to take out the paintings, tapestries and furniture to a more secure location. Thus the residence has been painstakingly restored, with the original interiors being returned to their rightful places after the restoration work was complete.

I visited the rooms that you aren’t taken to on the tour and you can see just how careful the work was. Although I didn’t realise the extent of the damage until I was told during the English tour.

If you are going to come to Wurzburg you must visit the Wurzburg Residence and if you visit the Residence you must take the tour. It’s just not the same without learning all about the history of the place.

The Wurzburg Residence was home to the Prince Bishops during the mid 1700s and is incredibly elaborate.

It’s history and culture is so significant that it was the third site in Germany to be inscribed on the UNESCO World Heritage List back in the 1970s.

However as our guide told us, the Residence probably never would have been restored and therefore never made the list if not for the lucky survival of the three most important rooms in the Residence.

The first of these, and the most beautiful part of the whole Residence is the fresco. As you walk up the grand staircase to the main rooms it’s the first thing you’ll spot. It’s a huge design that is painted onto the plaster of the roof and it’s one of the world’s best examples of an Italian fresco. In Germany!

The whole point of it was to impress any visitor and highlight the wealth and importance of those you owned the residence at the time; the prince bishops.

Unfortunately my photos aren’t so great as technically photos aren’t allowed. I had to be pretty sneaky just to get these. However the four sides of the fresco tell the story of the four continents that they knew existed at the time.

The detail is so amazing that at times you’ll look at an aspect of the fresco and you could swear it’s actually raised and made from plaster when really it’s painted on. The attention to detail is pheonomenal, which isn’t surprising given that it took Giovanni Battista Tiepolo one of the most famous Venetian artists at the time, years to complete.

The second room that managed to survive the destruction of the Residence is the ‘white room’. Again I wasn’t meant to take photos but of course I was a rebel and snapped some while there wasn’t a supervisor in the room. As you can see with age it now looks sightly more grey than white but that doesn’t take away from the beautiful of this room. I loved how detailed and simple it is all at the same time.

At this point I’d seen a few palaces but the Wurburg residence was definitely different.

The third room was a room I didn’t manage to sneak a photo of but it made up of paintings down by the same artist as the fresco; Tiepolo. You’ll just have to get yourself to Wurzburg to see this room. What is pretty incredible about this room is the stone bannisters and pillars that have been made to look like marble although they aren’t. I also particularly liked the detail around the crevices and the roof. Apparently it was meant to be far more elaborate but as is common in palaces, the owners run out of money so Tiepolo couldn’t finish.

There are also a special set of rooms that you can only visit with a guided tour. This is kind of the part of the Wurzburg Residence where it felt a little bit like any other palace.

I think with any palace there are a couple of different rooms and pieces that make me go ‘wow’, but is also only so many old fashioned beds and furniture one can look at before they all start to feel the same.

By the time I’d explored the chapel and the gardens I discovered that I’d passed more than three hours seeing the Residence. This was mostly because of the very talented and informative English tour guide that we had for our tour.

He was willing to answer all of our questions and was one of the best guides I’ve had on the trip so far.

After visiting the Residence I headed to the river. My host had explained that there was an old bridge there that looked a bit like the famous one in Prague. I was intrigued so I headed through the university district in search of it. I’ll admit it’s pretty cool to look at, especially because of the gothic feel of the statutes.

The view from the bridge is pretty spectacular as well.

If you are less lazy than I was feeling that day you might want to head up the hill from here to visit the fortress and get a great birds eye view of Wurzburg. At this point I wasn’t really feeling up to it so I headed back to the Christmas Market as I really wanted to experience it at twilight.

It didn’t disappoint, I think I got the best Christmas market photos of the trip (if I do say so myself).

I’d like to say that I then spent a night on the town in Wurzburg but really I headed back to my host’s place to play with his cats while he was at band practice. I swear I’m not a crazy cat lady just yet.