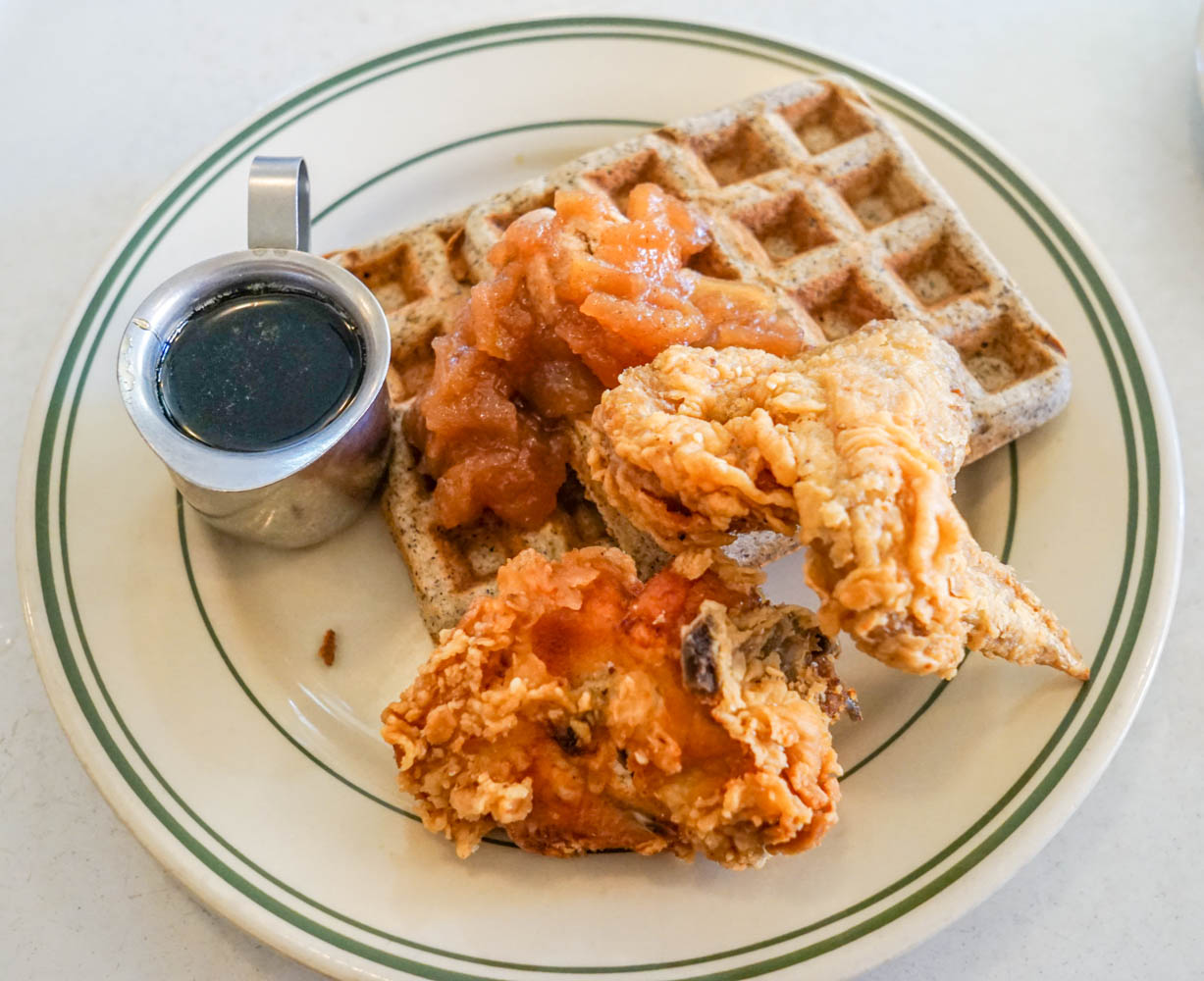 One of the reasons I love calling Melbourne home is because it is such a foodie city. I can find any cuisine I want, the food is delicious and I could live here for years and still haven’t eaten all the amazing things the city has to offer. I’ve always said that if I was to live anywhere else but Melbourne it would have to be a foodie city; New York City definitely fits that bill.

I’d heard so much about the food scene in New York. I follow a few New York based travel bloggers, a lot of my friends had visited and I follow lots of New York foodies on instagram. Needless to say I had high expectations, as well as a high travel budget for food for my visit to New York. ‘

Luckily it did not disappoint. The only disappointing thing was that I only had 5 days in the city and therefore didn’t get to eat at even half of the places I wanted to visit. I’ve already vowed that next time I’m staying for a minimum of two weeks. Maybe it might even be two years.

So instead of writing a ‘guide to New York food’ or even ‘what to eat in New York’ which I would be very unqualified to write, I’ve decided to put together a put outlining absolutely everything I ate during my five days in the city.

Smoked salmon bagels are up there with my favourite foods, and my friend and fellow foodie Kyle had told me that I absolutely must eat bagels while in New York City. Specifically, he pointed me in the direction of Russ & Daughters, a deli on the Lower East Side that specialises in smoked salmon and lox bagels.

It definitely didn’t disappoint. Both Dad and I chose garlic bagels that we stacked full of Atlantic smoked salmon, cream cheese, tomato, red onions and capers. The deli doesn’t have seating inside but we plonked ourselves on the single bench out the front and proceeded to eat the best bagel of our lives. It was our very first meal in NYC and it definitely did not disappoint.

This chain began in New York but has now become renowned all over the world for its amazing burgers, fries and shakes. Burgers chains are super popular in the United States but Shake Shack is definitely better than your standard McDonalds. We ate here more than once, as it was a convenient and quick stop after watching a show on Broadway.

The burgers aren’t the best burgers I’ve ever eaten, but they are really affordable by New York standards and the ingredients taste fresh. But for me the highlight of Shake Shack is what they are named for; their shakes. Sometimes we just popped in to get amazing vanilla malt shakes. I think between the two of us we drank 10 in 5 days!

I’m a dumplings fiend and I hadn’t had them in so long. While dumplings are the stable diet of most university students (and people generally) in Melbourne, they aren’t easy to find in Europe. The only time I found dumplings during my whole time there was in London . So although I’d managed to sporadically solve my thai and Vietnamese cravings, it had not been as easy to satisfy the dumplings one.

The Lamb and Green Squash Dumplings at Tianjin Dumpling House definitely helped with that; in fact they are some of the best dumplings I’ve had in my life. The flavour combination of the lamb and the green squash was insanely good. Like all good dumpling houses it isn’t a pretty location, you’ll find this place deep in the bowels of Golden Shopping Mall; it’s essentially a grungy food court.

I would have loved to have eaten more dishes in Flushing but a lot of the great places open for lunch only and we headed out to New York’s biggest Chinatown late at night.

One of the things that New York City can hold over Melbourne is the availability of my favourite Korean dish; Dak Galbi. This Korean style paella is made up of chicken marinated in spicy sauce, cabbage, sweet potato and rice cake. They then add a mixture of rice and nori to the grill to get crispy and mix with the chicken.

I’d been trying to find it again every since I left Korea and I finally found it in the suburbs of New York. We had to even get in an uber to get here but it was well worth it to be able to stuff our faces full of delicious Dak Galbi!

I figured Dad and I needed to have some sort of breakfast before we began our walking tour of Brooklyn so I quickly looked for a good bagel place near the meeting point. What I found was Zucker’s Bagels and Smoked Fish that had delicious smoked salmon bagels, but not on the level of Russ & Daughters.

Everything at Pies ‘n’ Thighs in Brooklyn

Even though I wasn’t exactly in the right place, I didn’t want to leave the United States without at least trying some southern food. A quick search sent me in the direction of Pies ‘n’ Thighs in Brooklyn. Dad and I ordered chicken and waffles, and a chicken biscuit full of fried chicken and spicy honey butter.

The chicken and waffles were good, but the chicken biscuit blew my mind. It was the single best thing I ate during my whole time in New York City. It had me wishing I wasn’t sharing with Dad as I wanted to eat it all. The biscuit literally melted in my mouth, the chicken was perfectly cooked and crispy and that spicy honey butter was a flavour explosion. Basically, a perfect dish.

We finished our meal with Pies ‘n’ Thighs’ famous banana cream pie which was hands down the best pie I’ve ever had. This place was definitely a winner!

The ice cream was delicious but I had become a bit of an ice cream snob since living in Europe, particular in Italy. My problem with much of the ice-cream I ate in the US was that it was a bit too sweet for me- the sugar overpowered everything else.

After catching a game of Ice Hockey at the Barclays Centre in Brooklyn we stumbled upon Morgan’s Barbecue for some late dinner. We ordered the spicy wings, beef ribs and mac ‘n’ cheese. It wasn’t terrible but given the quality of food we had been eating in NYC, it was easily the worst meal we had during our time in the city. Everything tasted fine but nothing wowed me and I had had better ‘American barbeque’ in Australia!

I know there are probably some amazing hot dog vendors in NYC, and eating at the probably touristy one near Times Square probably wasn’t the greatest idea. But we were super hungry and it was right there. And if I’m being honest- it was actually bloody delicious!

Given that NYC was probably going to be the last place I would found dumplings before Melbourne (which was still four months away), I couldn’t stop at just one dumplings fix. So we headed to Chinatown in Manhattan and to Shanghai Café Deluxe which was supposed to have the best Xiao Long Bao (pork soup dumplings) in New York City. We were not disappointed. I got super excited about finding my favourite type of dumplings and we ordered 32 between us, along with spring onion pancake and wontons with chilli oil and peanut sauce.

And we ate every delicious thing.

Pizza from Keste Pizza and Vino

I couldn’t leave New York City without eating pizza at least once. Although I think Keste was more the pure Italian style than the New York style pizza I had heard so much about. But this place in the West Village had the best pizza I had eaten since Italy. We both ordered the ‘Keste’- a tomato based pizza with buffalo mozzarella, prosciutto, rocket, pecorino cheese and basil. It was delicious and I’d totally recommend this place, especially for lunch when they have a deal on smaller, lunch-sized pizzas.

This place was right near Keste and when I saw it I just had to stop. I love all things banana and chocolate when it comes to ice-cream so it didn’t take me long to zero in on the banana split pop.

It was delicious and the best quality ice-cream I had in my whole time in New York!

Someone told me to go eat cheesecake while I was in New York City, so I went and ate cheesecake. I’m still a huge fan of the unbaked variety of cheesecakes, rather than the baked version you’ll find in most of the US, including at Eileen’s Special Cheesecake.

They were yummy but I still think my Mum makes the best!

We had room for one more meal before we headed to the airport for our flight to Mexico (and more food heaven). So we headed to the Ramen place just down the road from our AirBnB in Astoria, Queens.

The ramen here was super delicious and super spicy (just how I like it!).