Falling in Love with Andalusia: 3 Days in Granada 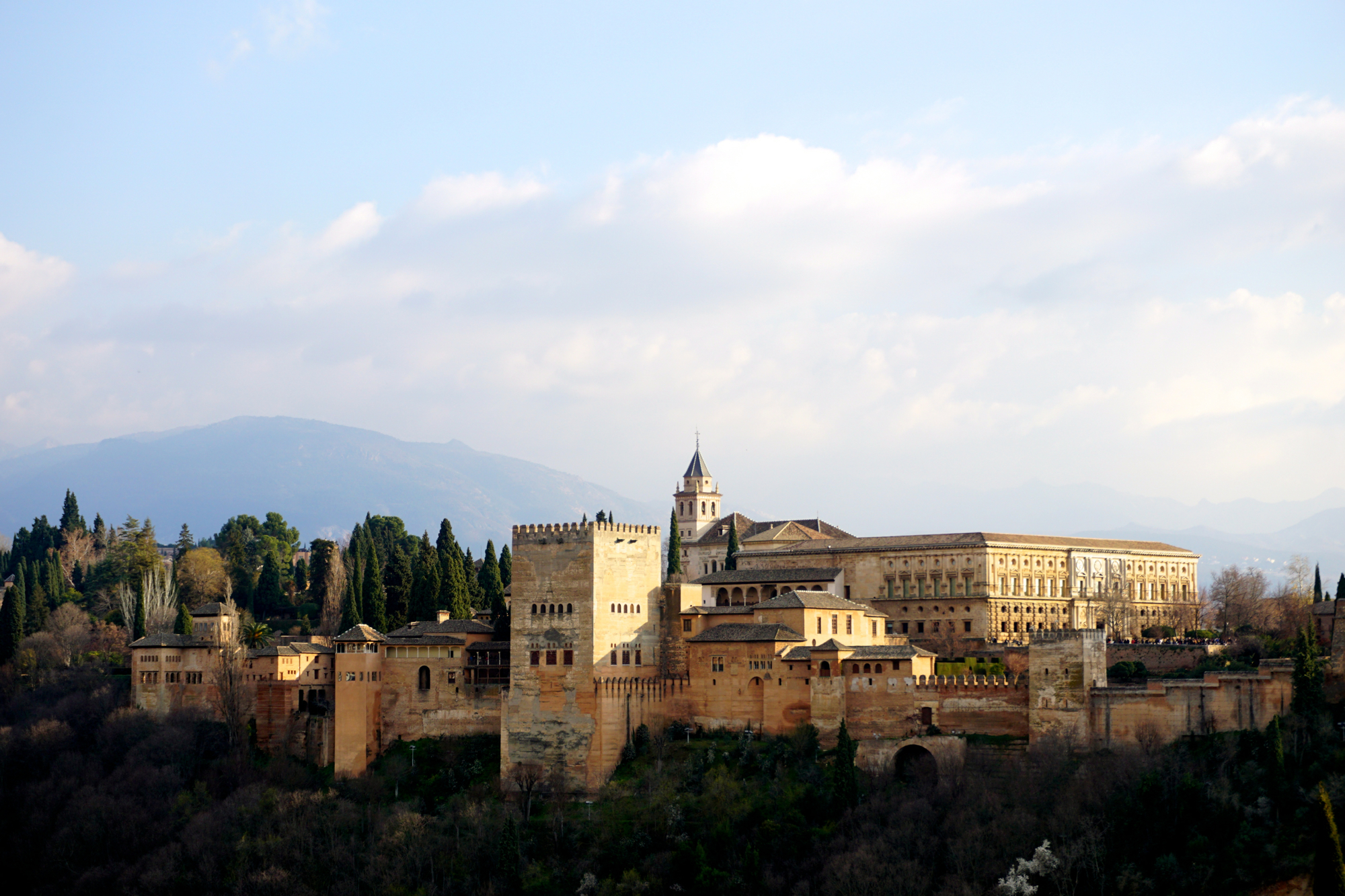 Granada was one of my favourite destinations in Spain. By the end of my short 3 days in Granada I was wishing I had been able to extend my stay. Given another opportunity I would have stayed for another week!

That’s not to say that I thought I missed anything particularly essential on my visit to Granada. I hit up most of the must sees, including a whole day spent in the famous Alhambra. But Granada is the type of city where I was content to wander under and soak up the atmosphere.

I didn’t want anymore time to see anything but I wanted more time to wander the streets, to stop for tapas and wine, to sit out in the sun and read my book. It was the perfect type of city paradise.

Thus my first piece of advice for Granada is to book in extra days if you can! But if like me, you find yourself with only three days in Granada this is how I spent mine.

3 Days in Granada: Day One- Albayzín

Albayzin is the old Arab quarter of Granada. It’s located on the opposite hill to the famous Alhambra and it was my favourite part of Granada.

Lucky for me, it was also the district in which my couchsurfing host lived so I spent many afternoons and days wandering around the district. But my first day in Granada was the day that I properly took in Albayzin, with the expert knowledge of my host.

Albayzin was the first indication I had of how different Granada is to the other parts of Spain I visited before and afterwards. The streets look different, the architecture looks different and there is even a different type of vibe and atmosphere. On a lazy afternoon, it was normal to see the streets filled with locals and tourists alike, street musicians and street hawkers. It was a real melting pot of people.

Albayzin is the type of place where you just need to purposely get lost. Go wandering through the streets, take a turn that will lead anywhere. Stop at one of the numerous cafes and have a coffee or hot chocolate out on the terrace. Walk inside one of the numerous churches, keep climbing up till you get to the very top of the hill. The best visit to Albayzin is an unplanned one.

Albayzin was also where I got the first, and perhaps best view of Granada’s most famous site; the Alhambra. There are numerous viewpoints in Albayzin where you can admire the sheer size of the Alhambra complex. Not to mention how beautiful it looks when surrounded by all the unique Granada countryside and other hills.

Whilst you can catch a bus up to Albayzin I’d recommend making the small walk up the steep hill. The path itself is also pretty magical. Not to mention you’ll feel a lot less guilty about all the tapas you’ll be eating.

I finished my first day in Granada the best way possible; eating lots of food.

Having a meal at La Oliva is an experience in and of itself. It’s not so much a restaurant but a deli, run by a man that is passionate about local food and local produce.

It’s not the greatest food I ate during my time in Spain but it was one of my most memorable meals. For 38,50 Euros I received more than 25 small courses with five wine pairings. The focus of the meal is on local flavours, local produce, local wine and of course, olive oil.

Before every course Francisco, the owner, explained where the products were coming, the background behind them and their context in Spain food. By the end of the meal I was extremely full, not just with food but with knowledge about the local food region.

It’s something I highly recommend for any trip to Granada.

I spent my second day in Granada exploring the main centre of the city. Whilst it didn’t quite have the charm of the Albayzin district, I found myself really enjoying my lazy afternoon strolling through the city, stopping in the park to read my book in the sun and sitting out on terraces sipping wine or eating ice cream.

It’s the way Granada should be enjoyed, and the way that locals like to enjoy it as well. As I sat on the steps of the cathedral with my kindle and the sun I over heard the many Spanish conversations of locals that had sat down for a chat, for a cigarette, to open a bottle of wine or to even have a picnic.

Speaking of the cathedral, it was one of my favourite parts of the centre of Granada. It’s imposing, beautiful and the main landmark of this part of town. Unfortunately it was a little too sunny in Granada on this day, which hampered my ability to get a good photo of it!

Of course it wouldn’t be a visit to Granada if I didn’t indulge in the local tapas. Granada is the city of tapas, as it’s one of the only cities where you can still get tapas the traditional way. Traditionally, tapas aren’t something you pay for. Back in the day, whenever you ordered a drink in Spain you received some form of tapas or small plate to enjoy with your drink.

Often you got rewarded for staying at the same bar, as the tapas got progressively bigger and better with the more drinks that you ordered.

This traditional way of experiencing tapas still exists in Granada. The majority of bars will serve a free tapas with every drink that you order. Many of them will also reward you for sticking around with bigger and better tapas. The bars vary in quality but as with most cities you are better off stepping outside the main tourist area in search of a place to eat.

I headed to Bar Poe, which is actually run by an Englishman and his Brazilian wife rather than a Spanish person. But have no doubt, these guys are locals, they have been in Granada a while.

It’s a well known place and you’ll find it easy to start a conversation with other travellers, whilst also overhearing the Spanish of locals. For the price of 2 Euros for the house wine, you can order from a list of unique tapas dishes. I ended up ordering 4 glasses of wine and 4 tapas.

I left the Bar feeling full and a little bit tipsy. All for the price of 8 Euros.

I left the best for last and headed to the Alhambra for my last day in Granada. The reason I choose to do this was because my third day in Granada was my only day there that didn’t fall on a weekend. Given the crowds that can form at the site, I figured going on a weekday would be preferable.

Booking well ahead of time for the Alhambra is advised. I was travelling in low season so I was able to book two days in advance but I’d been told by another traveller that went in September that they couldn’t go because everything was sold out a month in advance.

Whatever time of the year you go, online tickets are preferable because it means you don’t have to line up. But be aware I had some issues in paying with a foreign credit card, and the only card that was finally accepted was my AMEX.

I headed to the Alhambra nice and early. It was definitely a bit of a hike all the way down the hill from Albayzin and all the way back up the entrance of the Alhambra. It’s a rather step hill and there are local bus options but I was in the mood for a morning walk.

The Alhambra isn’t just one building but is a compelx made up of a variety of palaces, castles and gardens, all of which were built in different time periods.

Not surprisingly, the Nasrid Palaces were my favourite part of the Alhambra. As I walked through the various rooms, I marvelled at the beautiful tiled walls, the simple and quaint courtyards with water features and simple green hedges and the decorative engravings built into the plasters of the wall and the roof.

The uniqueness of the Nasrid Palaces is the Muslim architecture and design, with some clear Catholic influences. This has been attributed to the friendship between its creator; Mohammed V, the ruler of Nasrid and the Castillian Pedro I.

After starting my visit with the Nasrid Palaces, I spent another couple of hours exploring the rest of the Alhambra complex. The Muslim influence and the role of the Arabs in Granada and Andalusia is most evident in the Alhambra than perhaps any other place in the region.

I visited the older ruins of Albcazaba and the newer complex of Charles V’s palaces, took photos of Albayzin from viewpoints within the complex and wandered the beautiful gardens that seem to go on for forever.

I’m definitely planning on returning to Granada. I really want to spend more time exploring not just the city but the Sierra Nevada, a national park that Granada is directly connected to. There are so many hikes you can do just from living from the centre of Granada and climbing up and over the hills. The idea of exploring the Andalusian wilderness seems like it would have been the perfect addition to my Spain trip. But alas it wasn’t to be.

Where to Stay in Granada?

I couchsurfed while in Granada so I don’t have any specific recommendations on places to stay. But if you are a budget traveller or are just looking to make some friends, I always recommend staying at hostels. I met some people staying at Oasis Backpackers and they loved it.


Until next time Granada!