Hiring a Car in Portugal: Alcobaca, Batalha and Tomar in One Day from Lisbon 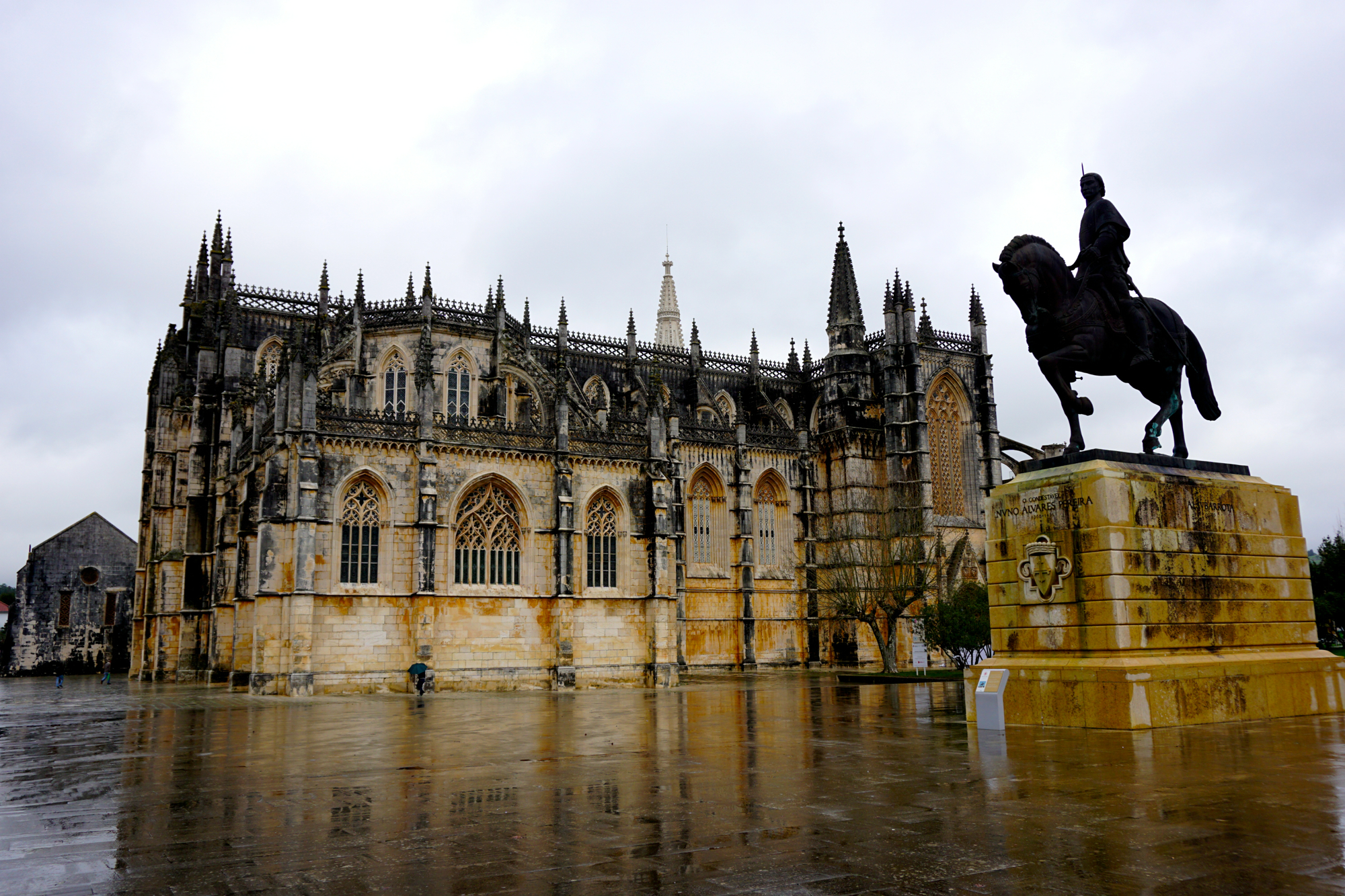 One of the things I love about Lisbon is its accessibility to other parts of Portugal. It’s very easy to do multiple day trips with Lisbon as your base. And I’m a huge fan of the day trip, day trips mean I can stay in one place longer and they mean I don’t have to move every second day.

There is on average only half an hour drive between each town. Thus it’s quiet easy to visit all three monasteries in the same day without even feeling too rushed. But there is one catch; you’ll need a car.

I even contemplated paying an insane amount of money for the only tour of the monasteries (which happened to be a private one), or just skipping the monasteries altogether.

But when I realised how affordable car hire would be, I begin to view driving in Portugal as another adventure.

Most of the car rentals in Lisbon are located at the airport. The airport in Lisbon is super accessible, you just need to take the metro on a normal metro ticket in order to get there.

Hence it wasn’t too much of an effort to head back to the airport to pick up the car. It also meant I could pretty much get straight on the highway from the airport instead of driving through Lisbon (I don’t think I was quite ready for that).

When hiring a car anywhere in Europe it pays to drive manual/stick, automatic cars just aren’t as common or popular in Europe, so you end up paying a lot more to get an automatic car. Luckily for me I’ve always driven manual, in fact I’d probably struggle more in automatic.

But I was seriously doubting my driving ability within 5 minutes of getting into our hire car. Although I ordered a Fiat, the rental company upgraded us to a Volkswagen. I’m used to driving a pretty old car with a very specific clutch. I wasn’t very used to driving this particular car.

What this meant is I spent the first fifteen minutes in the car starting and promptly stalling. It was fifteen minutes because that is how long it took me to work out I was driving to start in third gear. I could have sworn I was in first gear. By the time I discovered this the gear box was starting to smell a bit burnt and I couldn’t have felt more stupid.

After averting disaster by finally finding first gear, the next obstacle was actually getting onto the highway from the airport. I was very thankful that I had enlisted help from a girl at my hostel who I promptly put in charge of navigation.

Just when I’d been cruising on the highway for at least ten minutes and was feeling rather good about the whole driving in Portugal thing, I came to the next hiccup in the road. I wasn’t sure how to use the toll booth system.

There didn’t seem to be any place for my credit card. I soon worked out that I simply needed to press the button and take a card and that I would pay at the end of the toll road. Kind of like when you enter a carpark and pay on the way out. It’s pretty simple, but I was having a bit of a moment at this point.

Luckily everything was smooth sailing from then on. The road to Alcobaca, our first stop and monastery was straight and relatively simple. I managed to navigate the main roundabouts in Portugal, even though it felt a bit strange to be going around them the wrong way.

This was a bit scary for me, and hence sometimes I ended up cruising around the roundabout three times, waiting for there to be no cars so I’d feel safer changing lanes so quickly. Oh well we weren’t in too much of a rush.

We finally arrived in Alcobaca and when I finally saw the monastery all of the stress of the morning felt worth it. Alcobaca isn’t a very big town, it’s located at the bottom of a valley. Thus the large monastery dominates the whole town.

All of the monasteries work much the same way. It’s free to enter the church but you need to buy a ticket for the monastery part of the building.

We discovered that there was a combination ticket that included all three monasteries which saved us quite a bit of money. I can’t quite remember but I think the ticket is valid for a week, so if you feel like taking it a bit slower than we did this ticket will also be a good option for you.

The Alcobaca Monastery is quintessentially Portugese. In the courtyard you’ll find orange trees, the buildings consist of lots of arches, and you’ll find tiles in the typical Portugese colours; white and blue.

The church itself is also worth spending some time in. Here you’ll find ornately hand carved tombs, and a magnificent carving that is embedded into the wall. The age of the piece is obviously, some pieces have clearly deteriorated and are missing body parts. But the level of detail is astonishing.

After about an hour of exploring the Monastery we headed back to the car to discover the next hiccup of the day. Despite the fact that we had bought a parking ticket and displayed it on the dashboard, we had been issued a parking fine.

I spent the next couple of days in Portugal going from police station to police station trying to get this reversed but with no success. It wasn’t that they didn’t believe a mistake had been made, it was that apparently that this particular area wasn’t their jurisdiction. You have to love Portugese bureaucracy.

Deciding to forget about the fine altogether, at least for now, we headed to our next stop. Batalha Monastery is less than a thirty minute ride from Alcobaca. On the way we discovered a quirk of driving in Portugal; tailgating.

People in Portugal love to get very close to the back of your car if you aren’t at least going 15km over the spend limit. Having been warned about this quirk by a blog post on Portugese driving I read before hiring a car, I decidedly ignored it until we hit double lanes, where I slowed down to let the car pass.

Batalha Monastery seemed to have an older and less refurbished look than the Alcobaca Monastery. But the façade of the church was spectacular and the best of the three monasteries. I loved the entrance and gothic look of the outside of this monastery.

The chapel off the church was also really incredible, especially because of the stained class windows and the amount of light coming through them.

I loved that whilst Batalha Monastery had almost the same layout as the Alcobaca Monastery, it was decidedly different. Yes there was a church but it was a completely different design, especially with the smaller chapel.

There was a courtyard but this one was also different. Instead of the circle and curves of the Alcobaca Monastery, the Batalha Monastery was all about straight lines and lattice type designs.

The Convent of Christ in Tomar

Another thirty minute drive and we arrived at the last stop of the day; Tomar Monastery which is called the Convent of Christ.

The city of Tomar itself is really pretty and if you have an extra day I’d recommend maybe sticking here the night and visiting the monastery the next morning. By the time we arrived in Tomar I was feeling pretty exhausted.

But luckily visiting the Convent of Christ didn’t feel like a chore because it was clearly the best monastery of the day. The Convent of Christ is located on a hill overlooking the city of Tomar. It’s also build right next to the ruins of a castle, which means you get two old and historical buildings in one!

The juxtaposition of the old ruins of the castle fortress and the newer monastery building was incredible. There were so many hidden hallways, stairs and levels to explore. I particular loved all of the little courtyards that we happened upon. And the view that we were able to get of them from the roof of the Monastery.

But the highlight of Tomar monastery is the Romanesque round church. The Round Church is full of a round altar with magnificent altar pieces. The columns are painted with beautiful portraits that have been attributed to the Portugese painter, Jorge Alfonso. The Round Church was first consecrated in the 12th century, but wasn’t completed in its current form until the 16th century.

It’s simply magnificent and is something you don’t want to rush. We spent a lot time looking and interpreting all of the different panels and facades of the altar.

It was another hour and half drive back to Lisbon. The drive back was pleasantly uneventful. Although we did stop for fifteen minutes for me to have a quick powernap because I absolutely couldn’t keep driving I was feeling so tired.

Seriously guys, don’t be afraid to stop and have a rest if you are feeling fatigued while driving. It might add half an hour to your schedule but it’s better than having an accident which I was liable to do if I didn’t rest.

To be honest driving in Portugal wasn’t as crazy as I thought it would. Other than a habit of tailgating and never indicating, Portugese drivers aren’t too much of a hazard.

By the time we returned the car I was feeling like I’d accomplished something huge. Travel gives you many opportunities to go outside of your comfort zone and challenge yourself. Driving in Portugal was definitely one of those.