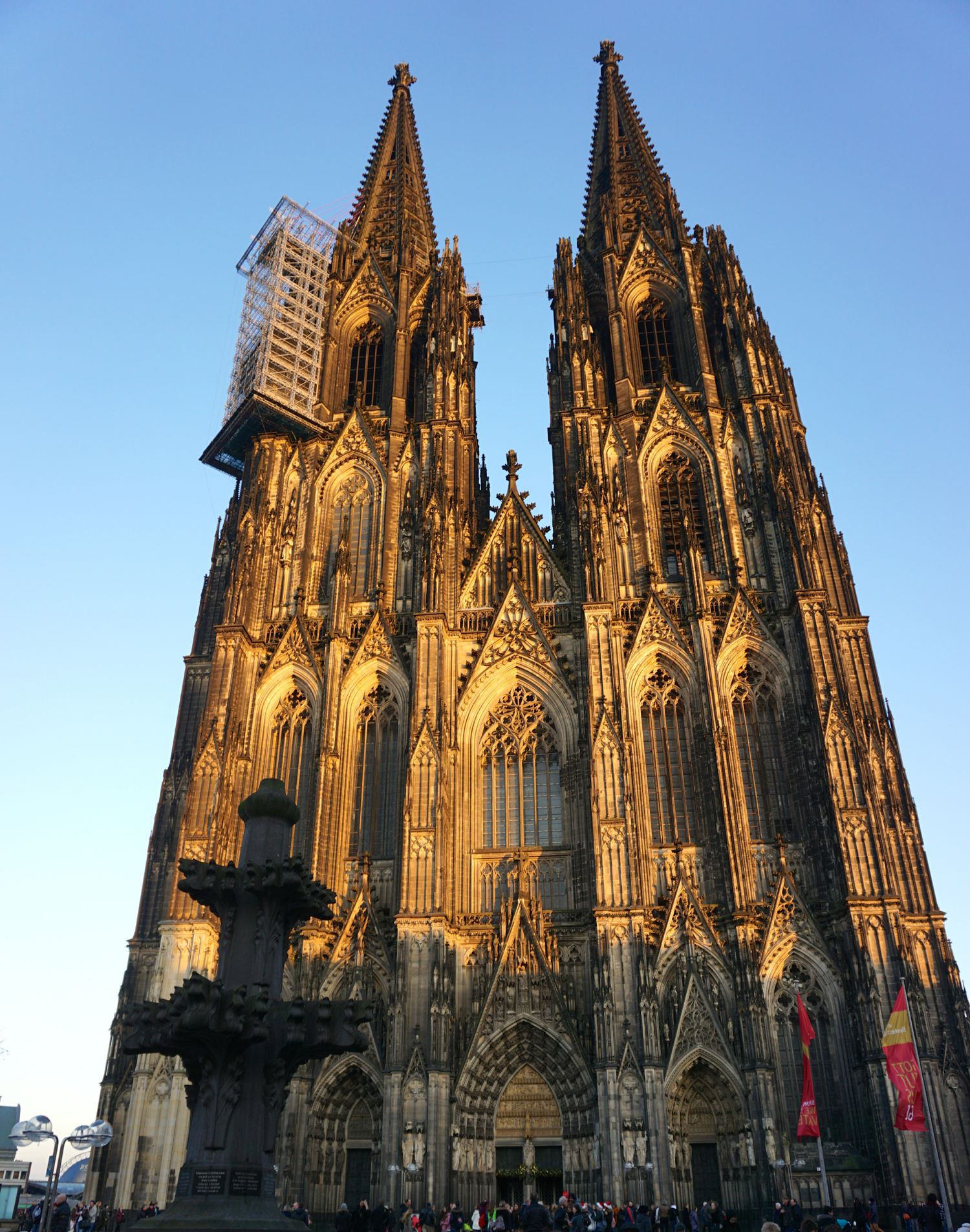 I actually googled this very phrase when I was planning my trip to Germany. I was extremely indecisive about whether or not to stop in the city. Finally geography won out and I decided a day in Cologne would make a nice stop between Trier and Amsterdam.

But after my visit to Cologne my short answer to this question would probably be ‘NO’. The long answer is ‘It’s complicated’- Cologne and I had a complicated relationship.

Is Cologne Worth Visiting? Why I’d Say No…

Other than being a convenient stop, one of the major reasons I wanted to stop in Cologne was because it was a great stop for visiting the nearby palaces of Augustenburg and Falkenlust in Bruhl and which is just a short tram ride away from the centre of Cologne.

However it was only when I went to confirm opening hours, as well as public transport directions to the palaces that I discovered they were closed in December for renovations. Alas one of few downsides to visiting Europe in low season!

My back up plan was to visit the many museums in Cologne that were meant to be pretty great. And Cologne might have stood more of a chance of making it into my good books if I hadn’t made the mistake of visiting on a Monday.

Whilst I always check opening times for small towns, I naively assumed that being a big city, everything in Cologne would be open seven days a week.

Unfortunately for me I was wrong, and all of Cologne’s museums are closed on a Monday. And I only discovered this fact when I went to put the directions to the Chocolate Museum into Google maps and got an alert to say it was most likely closed. A quick Google search confirmed it.

Now I don’t know about you but my disappointment over being denied chocolate is usually pretty acute- I felt like a kid whose ice cream had just fallen straight onto the pavement. This only became worse when I realised the ‘closed on Mondays’ phrase not only applied to the chocolate museum but the history museum and art museum that I had planned on visiting.

Finally, the atmosphere in Cologne just generally felt a little strange. And it was only when I heard what had happened there on New Years Eve that I thought it might have been my travel/women’s instincts keeping in.

Everywhere else in Germany (and in Europe since) I’ve felt completely safe walking around at night. But when I was walking home past the train station and to my hostel I felt myself reaching for my personal safety alarm for only the second time of the trip (the first time was when I was sleeping in the Salzburg train station at 2.30am).

I was also staying at a pretty terrible hostel. It was full of creepy old men who were always hanging out in the lounge area which was the only place for me to get to wifi. I found myself escaping to the bar next door just to escape their gazes.

I couldn’t wait to get out of that place and I was inwardly cursing all of the rejected couchsurfing requests that meant I had to stay in my first hostel of the trip. And people say couchsurfing is dangerous!

Is Cologne Worth Visiting? But It’s Complicated…

From all of that, you might think that my relationship in Cologne shouldn’t be complicated at all; I should just absolutely hate it and not want to recommend it at all.

But the fact is that Cologne did have a couple of redeeming recommendations; the Cologne Cathedral, the Christmas Markets and ironically some of the best Italian food I’ve eaten.

The Cologne Cathedral is often described as the best in Germany. It took hundreds and hundreds of years to complete, mainly because building stopped for 400 years between 1473 and 1880.

The Cathedral was meant to be expanded because of the presence of the shrine of the Three Kings which is believed to hold the remains of the Three Kings. These relics meant that hundreds of pilgrims came to visit the cathedral and in it’s original size they just couldn’t accommodate everyone.

Other than these altar pieces there is much to see and explore inside the Cathedral. In my most recent post I talked about how I was faced with church fatigue in Trier after visiting many cathedrals in Austria, Hungary and Germany. But the Cologne Cathedral was so formidable that my church fatigue was immediately overcome.

Whilst entrance to the cathedral is free, I opted to pay a little bit to take the guided tour. This was such a great way to explore the Cathedral as the tour was very informative. Germany is very guilty of not providing adequate historical information (in English) at even its most famous sights so I learnt many things from my guide that I wouldn’t have known otherwise.

My favourite part of the Cathedral was actually the smaller chapels inside the church which were home to some amazing Baroque altar pieces. One even had a cross that was almost a thousand years old.

The Cologne Cathedral is definitely a must visit but can really be done in two hours. If you are visiting Cologne outside of December I actually think it might be a good idea to just stopover in Cologne en route to another city. Although outside of December you might also have the option to go visit the castles in the afternoon that I couldn’t get to! They are meant to be spectacular.

But the reason why it’s worth sticking around in Cologne for a night in late November/December is because of the Cologne Christmas Markets. Cologne is home to some of the most famous Christmas Markets in Germany and even I have to admit they are pretty formidable.

They are surely touristy- you won’t find many locals here and you’ll definitely be paying tourist prices if you decide to buy any souvenirs, gluhwein or snacks at the market. But the decorations and lights that adorn all of the Christmas Markets in the centre of Cologne are very beautiful.

I particularly liked the Ferris wheel that was decked out in Christmas lights. It’s worth buying at least one over priced gluhwein so you can set back and enjoy the setting of any of the Cologne Christmas markets.

But when you get hungry head somewhere else for better and cheaper food. I found myself with a random craving for gnocchi (my mum makes amazing gnocchi and it was something I was missing from home). Hence I sought out an Italian food that wasn’t too far from the Christmas market.

Despite the fact that ‘La Tagiatelle’ is located right in tourist central, in a popular plaza (usually a red light for me when I’m deciding where to eat) I was amazed at the quality of the food. I had the best gnocchi carbonara of my life (sorry Mum!) in this restaurant and considering the location and the quality of the food the price wasn’t too expensive either (I paid around 15 euros for the pasta and a glass of wine).

I ended up returning the very next night and ordering the exact same dish! It’s a great option if you need a break from all of that German food.

Is Cologne Worth Visiting…to go or not to go?

If you only have limited time in Europe and/or Germany, then my recommendation is probably going to be to skip Cologne. Unless you are travelling from Germany to the Netherlands overland in which case it’s an obvious stop, or you really really want to see the Cathedral.

But that’s just my opinion, I’m sure there are people out there that absolutely loved Cologne (some of them might even comment on this post). I might even have loved it if things had gone differently!

Where Should I Stay in Cologne?

If you are a budget traveller or are just looking to make some friends, I always recommend staying at hostels. I stayed at SmartStay Hostel and it was just ok. A bit like the whole of Cologne in that respect.