Is Colombia Safe To Travel? Yes! Even for Solo Female Travellers 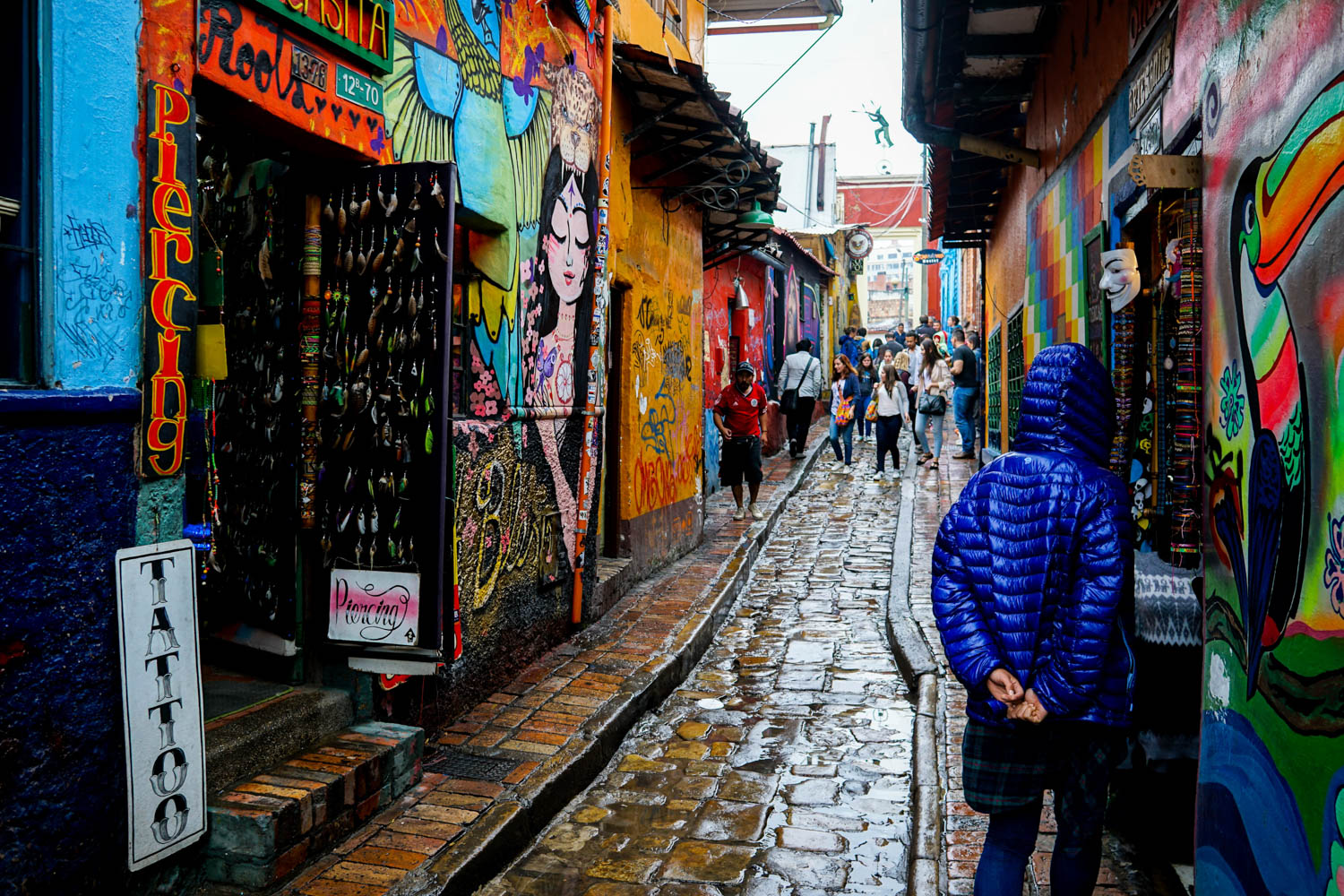 “Is Colombia Safe to Travel?”

That’s the three-word question that I’d say most people google before deciding to head to Colombia. I know I certainly googled it. Along with “solo female travellers in Colombia”, and “violence in Colombia” and “is it safe to travel in Colombia?”.

It’s also a question I got asked a lot before I travelled there. And that I still get asked whenever I’m telling a story about Colombia or raving about how magical a country it is.

Some of my family didn’t even bother to ask me the question. My mother and even my grandmother immediately presumed it was 100% dangerous and were not very impressed at all that I had decided to add it to my travel plans. Which is a bit of a big deal given that usually they are 100% supportive of my travel and generally trust my judgement when it comes to these things.

Given that safety in Colombia is such a burning question in the minds of anyone planning to go there, I decided I needed to dedicate a whole post to the question.

Is Colombia Safe to Travel? – The Statistics

Colombia’s murder rate in 2016 was the lowest it has been in more than forty years. That said their murder rate currently sits at 26.50 people per 100,000 inhabitants. Australia’s is less than one and the United States is 4.88.

It’s still lower than Brazil’s murder rate (26.98), which I think is interesting given that from my own personal experience people tended to have less problems with booking a ticket to Brazil than to Colombia. The one thing you also must remember is that the majority of Colombia’s crime is drug or gang related. Hence the high murder rate is not indicative of everyday violence, or violence against tourists. Most these murders are committed in four main Colombian cities- Cali, Palmira, Armenia and Cucuta. Cali is the only city of the four that is on the backpacking trail, and even then it is no surprise that the most murders occur in Cali because that is where the biggest drug cartel in Colombia is from.

The US Department of State warns its citizens to exercise caution in Colombia, especially in some rural and urban areas. They advise against taking certain bus routes, especially at night. But I can’t say I ever listen to the US Department of States considering my experience has been that they tend to be overly cautious (they advised against travel to Europe because of the terrorism threat). I usually only check the Australian government’s Smart Traveller website. Not just because of my nationality- it really is one of the most comprehensive government travel advice websites that I’ve seen.

Smart Traveller encourages travellers to exercise a high degree of caution in most areas of Colombia. There are ‘do not travel’ and ‘reconsider your need’ to travel warnings in place for specific areas, none of which are on the typical Colombian backpacker trail.

Is Colombia Safe to Travel? – My Personal Experience

I honestly can’t say I ever felt unsafe in Colombia. I took local public transport, I walked alone at night in Bogota (apparently not advisable), I walked around cities by myself and I got into great conversations with locals.

There have been times when I’ve been travelling where I have felt uneasy. That wasn’t a feeling that I got at any point during my time in Colombia. In fact I felt more unsafe in some parts of Brussels, Paris, New York and Spain than I ever did in Colombia.

Though there was one particular incident that was scary. My friends and I were on our way back to our hostel in Medellin at around lunchtime and our taxi driver got into a road rage incident. He basically ran a red light and almost cleaned up a motorbike rider. They then proceeded to yell at each other before they both pulled over to the side of the road. The motorbike rider pulled a gun from his bum bag, while our taxi driver jumped out of the cab in the direction of the boot presumably for his own weapon. We immediately jumped out of the cab and walked very briskly in the direction of our hostel.

It’s not a situation I really would have wanted to be in alone. But I can’t say I even felt unsafe in that situation. It was clearly posturing and I don’t think either of them would have discharged their weapon. We surely didn’t hear any shots in the 1km walk back to our hostel.  But it was a situation we wanted to get out of very fast.

I also heard one story of two girls I met in Peru who got held up at gunpoint in the middle of Bogota and got their phones taken from them. But this isn’t something that is unique to Colombia. I heard of it happening right across South America and Central America, especially in Rio, Brazil. Whilst these situations are scary. They are still relatively rare and if you quietly hand over your belongings it is doubtful that the situation will escalate beyond the person running away. I think it’s important when you decide to travel to regions like South America and Central America you acknowledge that there are extreme levels of poverty, as well as huge levels of inequality. Then result is that some people become desperate.

Is Colombia Safe To Travel? – Some Basic Precautions

Safety in Numbers- I was hardly ever alone the whole time I was in Colombia. Everyone seems to be going to the same places so you are always bumping into familiar faces at hostels. The great backpacking scene means that it is incredibly easy to find friends to go out and explore a city with. Or to have a night out with. You are a lot safer if you go out in a big group, especially at night. So, stay at hostel, put yourself out there and make friends.

My favourite hostels in Colombia include Cranky Croc in Bogota, Casa Kiwi and the Happy Buddha in Medellin, Hostel Mamallena in Cartagena and Masaya in Santa Marta.

Don’t go out alone at night- I did it once in Bogota because all my friends had just checked out and I was craving some sushi. But it is probably advisable not to walk around at night alone.

Fly Between Cities-  This is advice I got from Smart Traveller given that there is still a small risk of hijacking of buses on roads, especially at night. In contrast to the rest of South America, flying in Colombia is super cheap thanks to local budget airline VivaColombia. But if you really want to take the bus, I did never meet anyone during my time in Colombia (or even South America) that got their bus hijacked.

Download Uber (my promo code is brittj80ue) and get a local sim to use it- Being kidnapped by a taxi driver is extremely rare in Colombia these days. Although even five years ago it used to be a bit of a risk. Hence as an extra precaution I used Uber where it was available in Bogota and Medellin. Uber has a record of all their drivers and they know when they pick you up and drop you off. It is a safer option. If you need to get a taxi, like I did from the airport in Cartagena to my hostel, look for official booths at airports and train stations.

If you get mugged, hand over all your belongings- Getting your stuff stolen won’t be your greatest travel day. But a phone is just a phone. Money is nowhere near as important as your life. If you find yourself being violently robbed or held up at gunpoint just give them your stuff. It means a lot more to them than it does to you. Trust me when I say they really don’t want to hurt you- once they’ve got your stuff they are going to run away very quickly in the other direction.

Get Travel Insurance- it won’t be so bad if you get your stuff stolen if your travel insurance company can cover it.

Never get on a motorbike- On my ride into Medellin from the airport I unfortunately witnessed a horrific motorcycle accident. The driver was essentially a pancake on the road and did not survive the crash.  Motorcycle accidents are frequent in Colombia and drivers of cars are bad at respecting their space. I would not be getting on one, as a passenger or as a driver.

Is Colombia Safe To Travel?- Don’t Let Your Concerns Stop You From Visting Colombia

Colombia is one of the most amazing countries in the world. The short time I spent in the country was some of the most fun and rewarding memories of my whole trip. Whilst you need to take precautions, I felt Colombia to be safer than many other countries I’ve visited. Rio in Brazil for example is the most unsafe I have ever felt in a city! Don’t let sensationalism about Colombia stop you from travelling.

In the words of my favourite Hobbit, Bilbo Baggins,

“It’s a dangerous business, Frodo, going out your door. You step onto the road, and if you don’t keep your feet, there’s no knowing where you might be swept off to.”

But it is worth it!!

Is Marseille Worth Visiting?

10 Tips for Ensuring Your Health and Safety on the Road