Is Mexico City Worth Visiting? What to Do in Mexico’s Underrated Capital 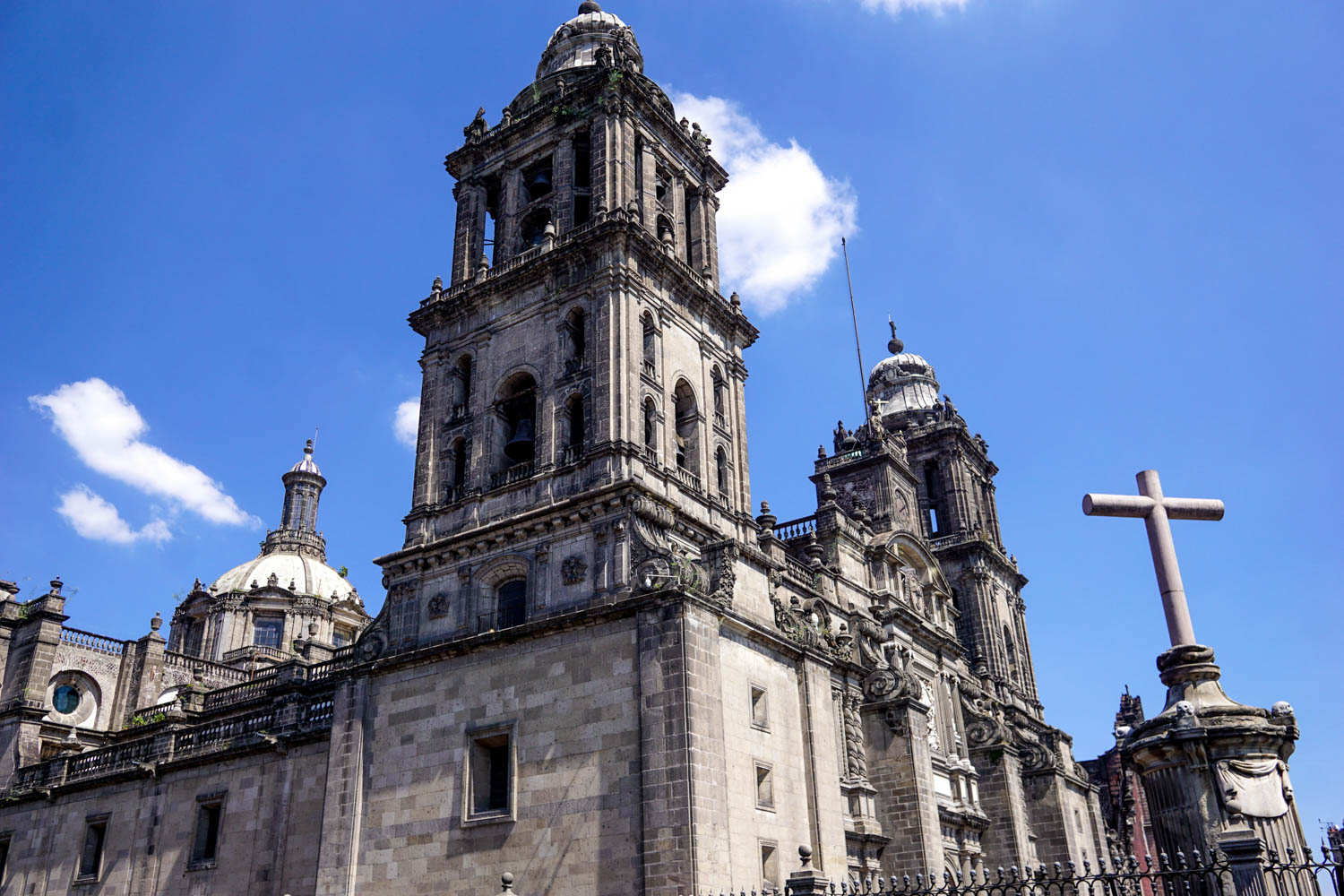 Mexico City is probably one of the most underrated places in Mexico. It’s often dubbed dangerous, or not interesting, or too difficult to visit by people when they are planning their trip through Mexico. They often skip it in favour of beach paradises like Cancun or cultural centres like Oaxaca. I’ve even met people that travelled straight from the airport to the bus station to head off somewhere else in Mexico, or people that stayed right by the airport because they were too scared to venture into the city to explore.

But Mexico City was one of my favourite places in Mexico. It’s not the perfect paradise of places I visited like Isla Mujeres or Tulum, but it’s a great way to experience Mexican culture. Mexico City to me felt very real, very alive and didn’t have the superficial, hyper touristy vibe of some of the other places I visited in the country.

I’ve already written about the food in Mexico City, and the fact that the striving foodie scene in and of itself makes Mexico City worth visiting. It’s been dubbed by many as one of the best cities for food in the world! But outside of just the food, there are many places worth visiting in and around Mexico City. We certainly found more than enough to fill our three days in the city!

Working out what to do in Mexico City was fortunately very easy for me because I had the expert advice of a local. Angie, my friend from university, grew up in Mexico City and offered lots of tips for what to see it and where to go.

For many, Mexico City has a reputation of being very dangerous. Of course I can only speak from my own personal experience, and the research I did beforehand, but I didn’t find Mexico City particularly dangerous. There are dangerous pockets of Mexico City, but they aren’t the type of neighbourhoods a tourist would find themselves in. Most of the high crime rate in the city is associated with the drug trade so if you aren’t trading, buying or selling drugs then you don’t have a lot to worry about. Of course, petty theft does exist, and you’ll need to hang onto your belongings on the crowded metro- but that advice rings true for every city in Europe as well.

Getting Around Mexico City

Mexico City has a great metro system that makes it super easy to get around. It’s also negligently cheap.  The metro is also safe but be careful of the doors that can close fast. My Dad and I almost ended up separated because one of the doors closed and I had to squeeze myself out onto the platform to wait for the next train. After that we had a rule that if for some reason one of us got in and the other didn’t, we would meet at the next metro stop on the line. Between the metro stops it was nice to walk around as Mexico City in late October was perfect weather for exploring. It wasn’t too hot but the sun shined most days! When the metro and our legs weren’t feasible we grabbed an Uber or Uber Pool which was ridiculously cheap.

Mexico City is located at 2,250m above sea level. You aren’t going to get the super altitude sickness I suffered from in places like Cusco and La Paz that are upwards of 3000m above sea level, but just be aware that the altitude does make it harder to walk up hills. The first day I was in Mexico City I was wondering why the two sets of stairs up to our room were absolutely destroying me- and then I remembered the altitude problem.

Where to Stay in Mexico City

We stayed at Hostel Suites DF in a private room, but they had lots of dorm rooms available. It was really well run, in an awesome location and the breakfast was amazing. We loved interacting with the beautiful old ladies in the kitchen during the day.

You might also want to check out AirBnBs in the city, or if you want something more comfortable I’d recommend booking through Booking.com. They have a great cancellation policy on so many of their bookings so you can often reserve a room well ahead but then switch things up if your plans change.

The Historic Centre of Mexico

We started our exploration of Mexico City with the UNESCO World Heritage Listed, Historic Centre. Luckily we weren’t staying very far so we hopped on the metro for two stops and got off at Bellas Artes station. The metro station is named for the Palacio de Bellas Artes (Palace of Fine Arts) which is a beautiful and imposing building surrounded by some green spaces. We didn’t go inside to see a show but I loved snapping photos from the outside.

We then started to wander along some of the old streets of the historic district in the direction of the Zocalo. It’s the main square of the city and it’s a great place to people watch and explore.

What I find so interesting about the square is that prior to the colonisation of the city it was the ceremonial centre of the Aztec City, Tenochtitlan. So, it’s almost like the Zocalo has had two lives- pre-colonisation and post-colonisation- and in both periods has had a similar role as the centre of life of the city. It’s easy to forget when wandering the colonised metropolis of Mexico City that this space was the capital of the Aztecs and once one of the biggest cities in the Americans.

But if you wander around the downtown you will come alone some of the excavated ruins of this old city. Unfortunately, most of them remain below the various buildings that make up the downtown. One of the best remaining pieces of this heritage is Templo Major which is located right near to the Mexico City’s Metropolitan Cathedral.

The Cathedral is also worth checking out as it is the largest cathedral in the Americas.

I absolutely love exploring city parks and Chapultepec Park in Mexico City was no exception. We wandered this beautiful green space, took some awesome photos and I even had a chat in broken Spanish to one of the street vendors that sold us fresh, cold coconuts. One of the advantages of altitude destroying all levels of your fitness is you take things slow. We got to soak up the atmosphere in the park.

In the middle of the park, on the top of Chapultepec Hill is Chapultepec Castle. It was one of my favourite spots in Mexico City, despite how much I huffed and puffed on the way to the top. From the top, you’ll get a great view over the city below.

But more than that, the castle itself was a beautiful feat of architecture. I loved the way the interior was decorated and the gardens were superb. I really could have been exploring another beautiful European castle. The only disappointing part of our visit was that most the information was only described in Spanish. This meant that I only understood half of what was written- something that I hated given how much I usually love soaking up history.

The Day of the Dead Celebrations

We arrived in Mexico City just as the Day of the Dead celebrations were kicking off. While the official Day of the Dead wasn’t for a couple of more days (when we were heading off to Oaxaca), the weekend before the celebrations provided an opportunity for the city to come alive. We had so much fun just wandering the streets at night and soaking up the vibe from the celebrations! Although by the end of it I had had my fair share of firecrackers that kept us up at all hours of the night.

Mexico City is full of amazing markets that are always buzzing with people. We checked out two that we stumbled upon during our visit; the Lagunilla market and some other one we didn’t quite catch the name of. I would have loved to check out more of the Food Markets, or hop on a foodie tour through one of them.

Other Places to Visit

We only had three days in the city, which wasn’t enough to experience everything it had to offer. I was very disappointed to be missing out on the Frida Kahlo museum for example. And I really wanted to visit the other UNESCO World Heritage Sites in Mexico City; the Luis Barragan House and Studio and the Central University City Campus. If you have a couple of extra days those areas of the city would be worth checking out. Lucky I’m planning on returning in 2019 to see more and eat more food.

One of our three days in the city we did a day trip out to Teotihaucan, an amazing set of Aztec Ruins easily accessible from Mexico City. Look out for an upcoming post on that one!

Mexico City is a huge city so I’ve inevitably forgotten something. Comment below with your tips!