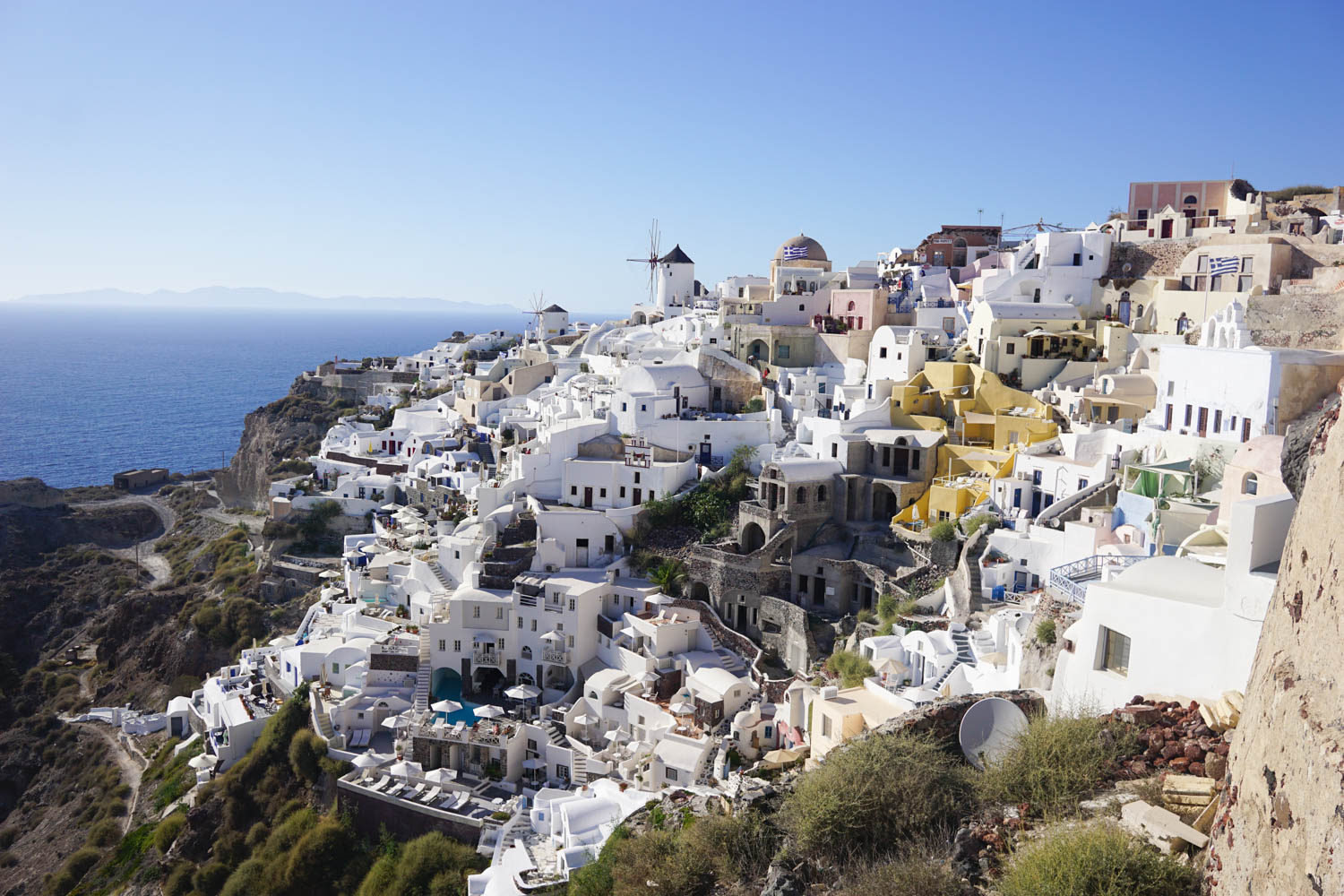 There is no way to deny it- Santorini is a super touristy destination. In fact it’s one of the world’s top tourism destinations. 10% of all tourists that visit Greece end up in Santorini, with 2 million people flocking to the island every year. Not to mention the majority of those tourists arrive in the three or four months of summer.

But as I’ve said before when writing about destinations like Paris , London and Venice - just because an island is touristy doesn’t mean you should automatically not go there. The fact that tourists flock to a certain spot usually mean it has something spectacular to offer. And there is no denying that Santorini is an incredible place.

So here are some of the reasons you should still go, even if means dealing with lots of other visitors and slightly more expensive prices than other parts of Greece.

If you remember reading my Mykonos post, you’ll know that the reason I don’t think blowing a heap of money on touristy and expensive Mykonos is worth it because you can get the same scenery at half the price on the nearby island of Paros.

The same can’t be said for Santorini. It’s unique- completely different from any other island I visited in Greece. Whilst you’ll find volcanic beaches and islands nearby like Milos, you won’t find anything quite like Santorini.

The main towns and hub of the majority of Greek islands lie along the water. Mykonos, Paros, Naxos- all of them are built in the same way, with the main towns built around the port or the beach. That’s the centre of life on the island and where hundreds of years ago their settlers decided to start.

In Santorini they did things a lot differently- they decided to build their villages way up on the cliff face.

Santorini is a huge island and when deciding where to stay you are usually faced with two choices; to stay along the beaches that are located on the east and southern sides of the island, or to stay in the cliff top villages with a view of the volcano and mostly submerged islands below.

I visited Santorini twice during my Greek island hopping adventure and both times we stayed in these villages. The two most popular villages are Fira, the main town of Santorini and Oia.

There is no doubt for me that Oia was the most beautiful place I visited during my whole time in Greece. It just doesn’t get more beautiful than the houses built into the cliff that look like they are stacked upon each other. The fact that every building is white only makes it more picturesque. The best plan of attack for Oia is to just wander around and get lost amongst the winding pathways and mishmash of houses.

Then make sure you head down to Amoudi Bay for some swimming (and cliff jumping if you are brave enough) or just for some pretty pictures!

The other towns of Santorini pale in comparison to the magic of Oia, but are still worth checking out. For my first visit to Santorini, Fira was a perfect base as we didn’t have a car and all of the buses go in and out of the main town.

Santorini is often lauded as having some of the best sunsets in the world and I can’t help but agree. The thing that makes these sunsets so spectacular isn’t the hues of the sky or even the reflection on the water below, it’s watching the sunset over the pretty little caldera houses of Oia.

Every night the sun puts on the same show and every night it seems like every tourist on the whole island packs into Oia to see it. The island has to put on extra buses every night in order to get everyone back to Fira and beyond after the sunsets. Everyone claps, something I thought was a bit strange. I’m not sure Mother Nature can hear you applauding her- but the maybe she can.

But given the huge amounts of people coming to see the sunset, finding a good spot can be tricky. We staked out our sunset spot at the castle for 2 hours before the sunset, but it was totally worth it for the views that we got.

The trick is not to disappear back to your guesthouse as soon as the sunsets. If you like taking pretty pictures, the best light and photo taking opportunity is actually just after the sun has set. The majority of my favourite photos from Santorini were taken just after sunset.

As I’ve said before, the food all over Greece is incredible. But there are a few regional specialities in Santorini that I hadn’t even tried before. The two dishes that were quintessentially Santorini were tomato keftes, lightly fried tomato fritters made with fresh organic tomatoes grown on the island. The second dish was a fava bean dip that was truly delicious. Beyond food, you’ll also find some pretty great wine made from grapes grown on the island. A visit to one of the wineries is a great afternoon activity.

The Greek Islands aren’t wanting for beaches. But the ones on Santorini are unique because the sand or pebbles (depending on which beach you visit) are all formed by the volcanic eruption that shaped the island.

In terms of a beach to relax and spend an afternoon on, Perissa was definitely the best. You can’t go past spending some hours at the Magic Bus, a restaurant right on the beach that is pretty affordable, does great cocktails and will let you use the lounge chairs for free so long as you are ordering food and drinks.

In contrast Red Beach doesn’t have much space, and it’s actually pretty dangerous to head down onto the beach itself because of the risk of landfall. The warning is there and unfortunately some day something might happen, but it seems more like a token warning given the hundreds of tourists that stream past the sign, kids in tow.

One of the best ways to see Red and White Beach, as well as Santorini’s famous volcano is by hopping on a boat trip. The best trips leave in the afternoon and end with you being able to watch the sunset over Oia from the boat.

I really loved our boat which included a delicious lunch, pickup at our AirBnB in Finikia, stops at the natural springs (which weren’t that warm and were a little gross) both beaches and the sunset. My favourite part was when they let the sail out and we went sailing down to Oia. The view of the villages on the tops of the cliffs from the boat was simply stunning.

Right near Red Beach is one of the most historic parts of Santorini, that many tourists tend to skip right over. Santorini has its very own Pompeii in the form of Akrotiri, a village that was completely covered in ash and volcanic rock from the volcanic eruption and that has since been excavated.

You won’t find human remains here though, as always the Greeks prove themselves to be some of the most intelligent in the ancient world, because they knew something was coming and left the island well before the eruption occurred.

Akrotiri definitely isn’t as big or as formidable as Pompeii, but it’s definitely worth a visit en route to Red Beach.

If there is one good thing about an island being popular with tourists it’s the great flight connections. Given its popularity you can fly to Santorini from most European capitals. There are frequent flights from London, Rome , Paris, Vienna and of course to Athens. It makes Santorini an easy stop on a European Adventure.

But if you are more into a Greek island hopping adventure like I did, Santorini has ferry connections to basically all of the islands in the Cyclades.

What did you love about Santorini? Tell me below.

The first time I visited Santorini I arrived on a ferry from nearby Milos island. We stayed in Fira town at Hotel Leta. They picked us up from the ferry terminal, they had a pool (that we actually never used) and the hotel itself was pretty good value and in a great location. Given that we based ourselves in Fira we didn’t end up hiring quad bikes or a car, instead we managed to visit everywhere easily using the bus system.

The second time I visited Santorini I arrived on a boat from Ios and we stayed at an AirBnb in Finikia. It was expensive, especially compared to what I paid in Fira but it was an unique experience as we were staying in a traditional Santorini cave house. They didn’t offer a free pickup but we hired a car that met us at the port. We left the island via the airport, with a short flight to Athens with Ryanair.