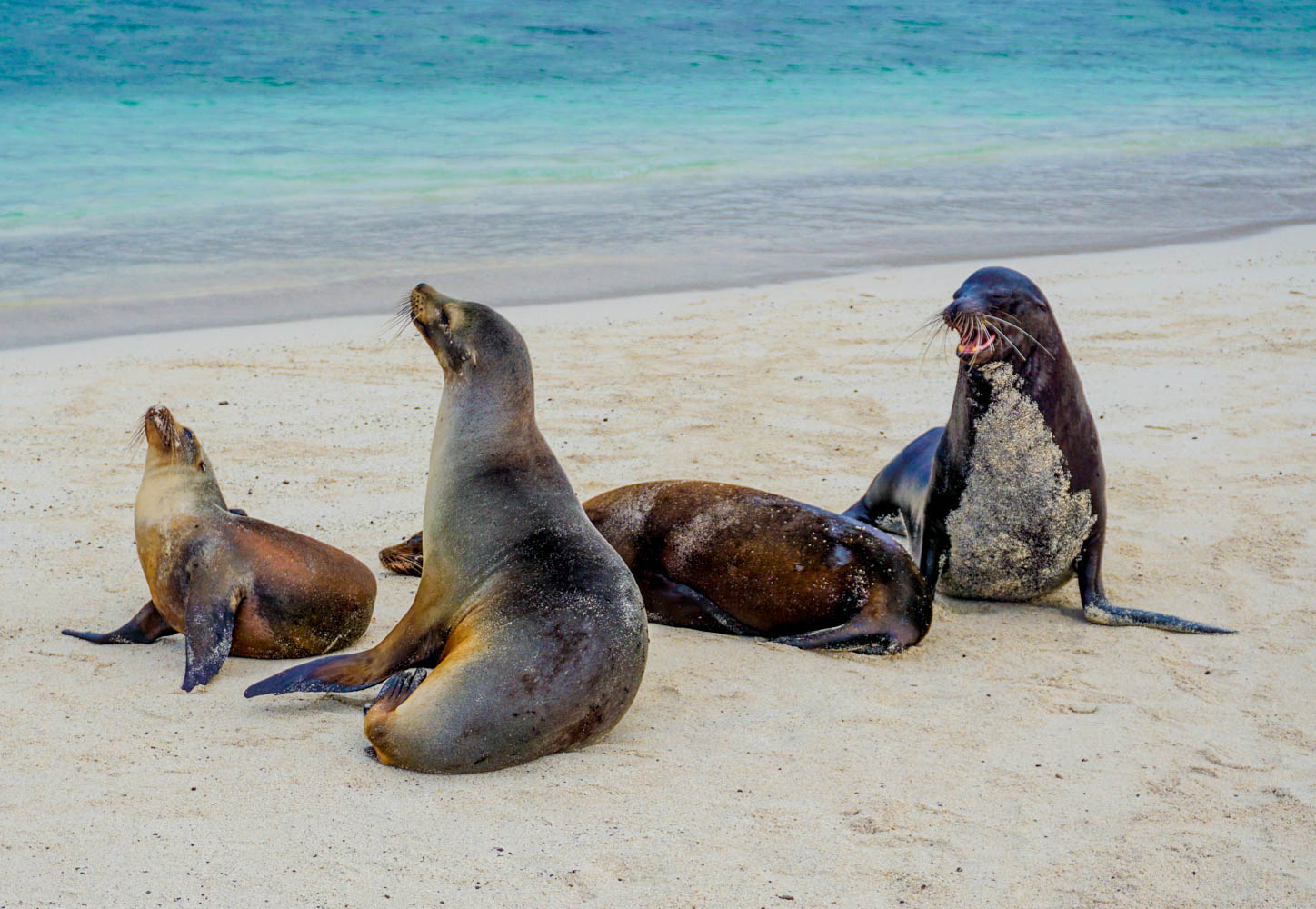 The Galapagos Islands have been on my bucket list for a very long time. I’ve always been dazzled at all the marine life and unique specifics that exist on the island, located 1000 km off the coast of Ecuador.

But the Galapagos islands are a destination that many of those backpacking South America must miss simply because the islands are notoriously expensive.

If you are looking to visit the Galapagos islands as cheaply as possible then chances are you are going to be land based and just book day trips. But if like me you want to save some money but also have the experience of visiting the Galapagos by boat tour, then a last minute Galapagos cruise deal is going to be the best valued option!

By shopping around town and haggling with various travel agencies I was able to get an 8-day cruise on a catamaran for $1000 USD. I talked to some people on my boat that had pre-booked their spot and they paid almost double that.

Getting a Last-Minute Deal

I’m a bit of a planner when it comes to travel. Despite the huge amount of flights, I’ve paid for and never gotten on because my plans change, and the deposits I’ve lost on hostels and tours, I’m still always determined to book things in advance.  Hence the idea of spending $400 on flights to the Galapagos without having a spot on a boat was daunting. But all of my research (including bumping into lots of people on the road that had visited themselves) told me that catching a last-minute deal was easily doable.

I arrived on the Galapagos on the main island of Santa Cruz without a room even being booked and headed straight to the numerous travel agencies in Puerto Ayora to see what kind of deals was on offer. To get the best deal, you should have a relative idea about what your budget is, what islands you really want to visit, how many days you want to spend on the boat and the level of comfort you want.

I knew that I was going to be happy on a budget boat, that I wanted to spend about seven days on my boat and that I was looking to pay no more than $1000 USD. I really wanted to get a tour that went either to Isla Espanola to see the condors or to Isla Genovesa to see the red-footed boobies. But after more than two hours of wandering around tour agencies I realised that the boats in my budget just didn’t stop on those islands. But more importantly I didn’t want a boat that went up and around Isla Isabela, the biggest island of the Galapagos. I really wanted to spend some time travelling Isabela independently after my boat tour so didn’t want to double up on my visit.

After spending a lot of time wandering around town and being offered three different prices for the exact same boat and itinerary, I finally decided to book my tour through External Dreams Travel Agency. Jorge was by far the most helpful guy I encountered all day and he was willing to negotiate with me to pay $1000 USD for an 8-day boat leaving that evening.

He even let me put a deposit down and borrow one of his GoPros for the duration of my trip!

Paying for Your Trip

The one issue that I encountered was paying for my cruise. Ecuador ATMS have a limit of $600 per day so I couldn’t fully pay in cash. This means I was stung with a hefty fee to be able to pay the balance with PayPal. My biggest piece of advice is to make sure you get cash out on the mainland first or arrive on the Galapagos with USDs!

I was staying in a double room with a girl from Belgium called Cinthia. It was a bunk in a tiny cabin with a bathroom attached but we always seemed to very comfortable. The beds were comfy and made up daily while we were out snorkelling. The top of the boat was the communal area where we had our meals and hung out together while the boat was moving positions or between snorkelling stops. The greatest thing about the trip was that it had a very backpacker vibe to it. All of us really bonded and I ended up catching up with lots of people on my boat throughout my South American trip. We were also lucky enough to have a couple with a baby on board that entertained us all with how incredibly cute she was!

The tour also included all our meals and they often provided us with snacks in between that as well. We had two different chefs for the trip and both were equally great. The food was basic- we usually got rice with some form of meat and some form of vegetables. But it was still very delicious and I never went hungry. We’d also often get free juice smoothies or even free cocktails.

Finally, the whole crew were amazing. We became a little family during the trip and there were a lot of in jokes made between us and the crew by the end of the trip. One of the crew that barely spoke any English affectionately labelled me Mojito after I stumbled back on the boat after a stop in Puerto Ayora professing my love for the cocktail.

My trip on the Solitario Jorge took me to so many of the islands of the Galapagos. We began at the very top of Santa Cruz before heading to and around Isla Santiago. We then travelled to Isla Pinzon and then to North Seymour island. We stopped back in Puerto Ayora to drop some passengers off, pick some passengers up and have an afternoon and night out on the town. The last two islands we visited were Isla Floreana and Isla San Cristobal. My favourite stop was the snorkelling on Pinzon!

Every single day of this trip was incredible. The one thing that amazed me most about the Galapagos islands were how accessible all the wildlife and marine were. Every time I’ve gone somewhere looking for animals, such as on safari in Africa, and looking for orangutans in Malaysia, it’s been a matter of crossing our fingers to hop we see that one lion or that one orangutan. The Galapagos islands was so full of life that we didn’t need to go far before we saw everything the archipelago had to offer.

I swan with sea lions and white tipped reef sharks. I spotted huge manta rays and eagle rays. I lost count of the amount of times I was able to swim lazily along with a giant sea turtle.  I saw octopuses (and a sea lion eating an octopus) and schools of beautiful fish. And that was just in the ocean!

On land, I snapped photos of the famous blue-footed boobies and of so many kinds of iguana that I can’t even remember their names. I marvelled at the flamingos and ran away from the herons and stinky sea lions.

And I got to meet giant land tortoises that are older than the oldest human being!

Every day involved at least one land visit and two snorkel stops. It was a jam-packed schedule and I spent much of the time between stops sleeping on the nets at the front of the boat. I got a healthy-looking tan and rested up between stops. Our guide was always careful to ensure that we adhered to the strict conservation rules on the islands but at the same time was able to spot and find everything that we wanted to see. If you want to dive there is also a dive master on board although it’s not a dedicated dive boat and the stops aren’t always to the greatest dive spots (they are prioritising the snorkelers after all).

Beyond the wildlife, the landscape of the islands themselves is incredible. I don’t think I ever pictured the Galapagos as quite so wild. I think I imagined tropical paradise more so than the cactus and harsh almost deserty landscape that I encountered. One of the highlights was the morning we spent wandering the lava tubes. The Galapagos are one of the most volcanic regions in the world and seeing the evidence of all that volcanic rock was crazy!

The Galapagos islands and the eight days I spent on Lonesome George were some of the best of my life. It really is a trip of a lifetime and I’ll never regret the huge dent that it put in my budget. I made amazing friends with humans and sea lions. I saw a huge array of animals that you can’t see anywhere else in the world. And I got to experience all that islands had to offer. I’m sure I’ll be back one day- hopefully with the ability to dive.