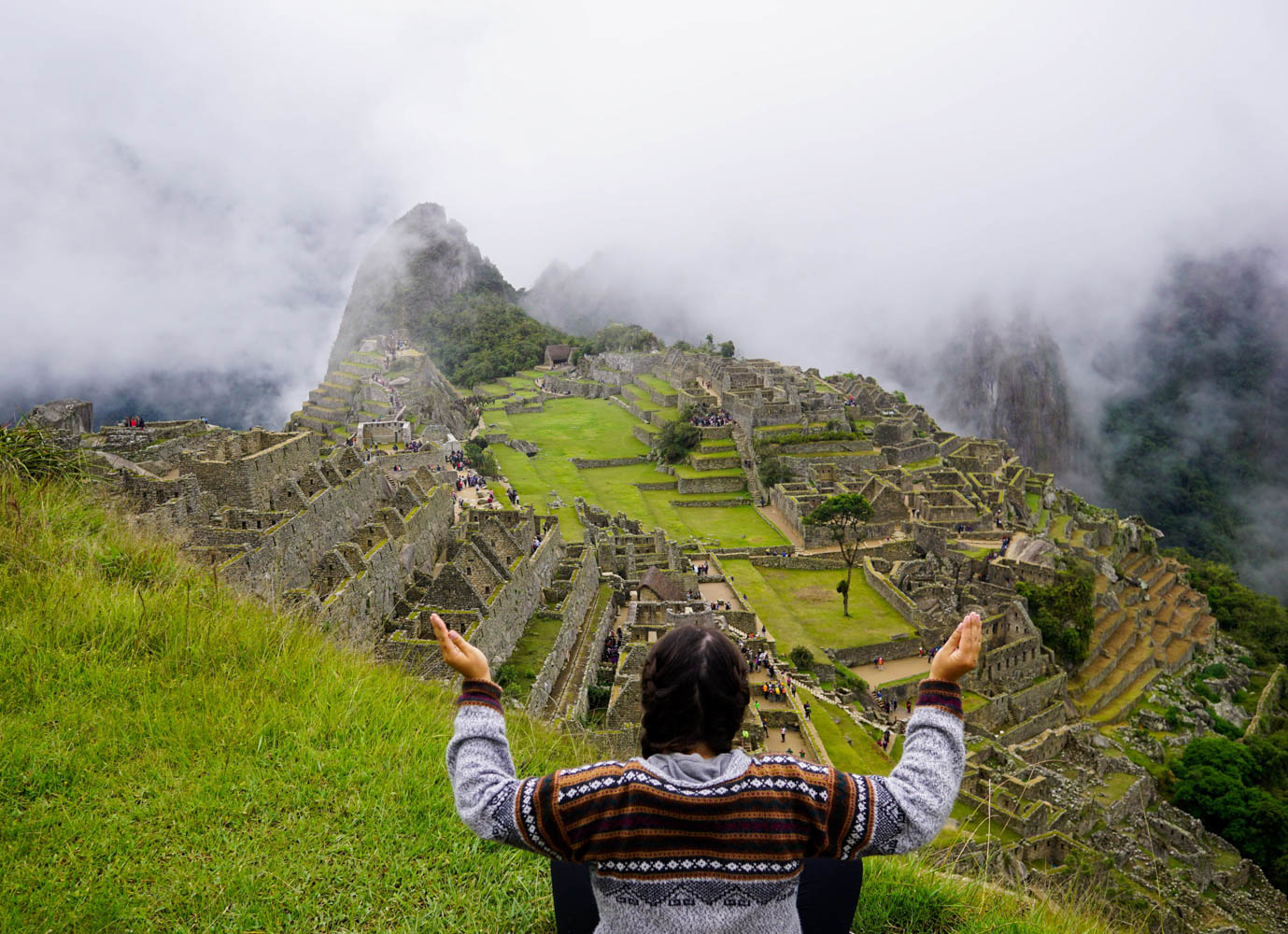 I chant the words to myself like a mantra. Or maybe even like a prayer. I knew it was going to take some sort of divine intervention to get me through the next hour of walking uphill.

The one thing they had clearly not told me about the walk up from Aguas Calientes to Machu Picchu was that the altitude might just kill me. It was already too late by the time I’d realised that breathing is hard when you are 2400m above sea level. And hiking is even worse.

If only to tease me, ever so often I’d hear the bus rolling past, packed full of people who had been smart enough not to attempt to take the hundreds of old stairs to the top.

But I was determined to finish what I had started. There was no walking down for me. Although I wasn’t attempting the four-day hike on the Inca Trail, I at least wanted the achievement of completing an hour long hike up the mountain. Surely, I could manage just that.

My little breathing mantra wasn’t just a way for me to keep putting one foot in front of the other. I needed to remind myself to take in more oxygen. Passing out from lack of oxygen was a serious concern at this point.

As I started to hear the crowds at the gate above, I realised I didn’t have much further to go. The sense of relief was palpable. I thought no feeling was better than taking that last step and arriving at the top. That was until I’d caught my first real glimpse of the Ancient City of Machu Picchu.

It’s not like I didn’t know what it looked like. I’d seen plenty of photos. Friends I’d met along the infamous ‘Gringo’ backpacking trail in South America had been posting photos of the city for what seemed like months. But no matter the cost of the camera or the skill of the photographer, I don’t think anyone can fully capture the real beauty of Machu Picchu.

Climbing just that short number of stairs had given me a new kind of appreciation for just how this city came to be built by the Inca Civilisation in the mid 1400s. Machu Picchu was more than a beautiful old city located on the top of a mountain seemingly in the middle of nowhere.

It’s a place where people, much like you and me, made their homes, grew their crops and engaged in trade with other cities.  It’s a reflection of a lost civilisation that we could study and examine for centuries and still not fully understand. A civilisation that likely would have continued to exist and flourish if not for the Spanish conquest of this incredible continent.

This time I wasn’t reminding myself to breathe so that I might make it up a mountain. Rather I was reminding myself to stop and take it all in. I didn’t need to be led around like a herd of cattle by a tour guide who was repeating a rehearsed speech he had been perfecting for years.

Instead I decided to get lost in a world that was so similar yet so different from my own. To venture into small buildings that would have made homes. To walk across the terraces that would have held crops and animals. To climb up to temples where people would once have prayed to their gods. To sit up on a stone perch and watch the clouds sweep across the city.

If anyone were to arrive at Machu Picchu and declare it merely a pile of old rocks they would suffer from more than just a lack of imagination. Just walking around those old rocks on your own is enough to gain a picture of what this city might have looked like more than 500 years ago.

It’s enough to make you wish for a time machine, if only you could experience the city when it was bustling with citizens rather than tourists.

Practical Information- Ways to Get to Machu Picchu

There are more than a few ways to reach Machu Picchu. If it’s on your bucket list and unlike me you have some level of fitness and the ability to deal with altitude sickness then you can do a 4-5 day hike to Machu Picchu. The most famous hike to Machu Picchu is the 4 day Inca Trail tour, but there are a limited number of permits for the path and you’ll have to book this well in advance. It’s an expensive trip. The budget and backpacker friendly hike is the Salkantay Hike. I heard of people get a 4 day trek for as low as $200 USD by booking it in Cusco. Unlike the Inca Trail there isn’t a need to book this one in advance outside of super high season, and you’ll save more than 50% by booking there. Either of these treks are meant to be very difficult so make sure you are prepared. You should give yourself at least four days in Cusco to assimilate to the altitude before attempting it.

There is also the Inca Jungle Trek which is a four-day tour to Machu Picchu that includes mountain biking, white water rafting, zip lining and hiking. It’s not exactly a cultural experience but I’ve heard it is lots of fun from friends that chose this option.

If you have lots of money, and not a lot of time the train is going to be the best option for you because it means you can visit in just one day. Or at least avoid all that walking. If you are going with this option you probably need to think about booking it in advance because it does sell out especially in high season.

Finally, the way we got to Machu Picchu is the ever-popular cheap backpacker option of the two day bus and walk combo. You get about a six-hour bus from Cusco to Hydro Electrica train station. From there you spend three hours hiking up the train tracks into Aquas Calientes where you spend the night. Then it’s an early morning wake up to hike the one hour uphill to Machu Picchu (as we did- don’t do it!), or to catch a bus up to the top. The tour also includes a guide when you get up there. You need to time your morning well because you’ll need to be back to walk back up the tracks to Hydro Electrica and hop on that lovely bus back to Cusco. Don’t expect to get back at any decent time- our bus, along with quite a few others blew a tyre on the terrible road.