The Magical Greek Mainland: A 2 Day Tour to Delphi and Meteora 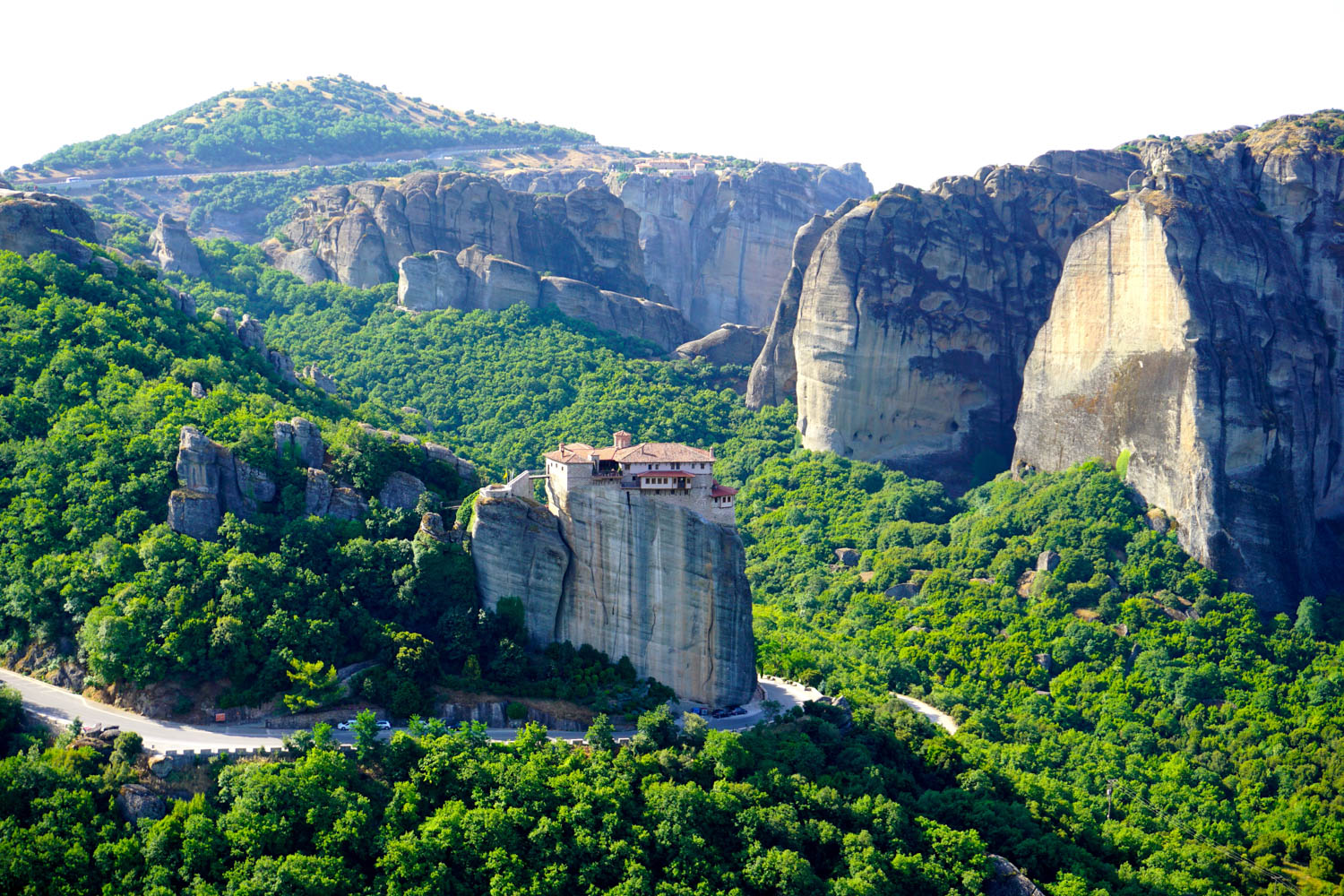 Before heading off on a ferry to explore the Greek Islands, I really wanted to experience more of mainland Greece outside of the capital of Athens. Mainland Greece is a wonderful land of spectacular archaeological sites. But I decided to pick just two places to explore; the Archaeological Site of Delphi and the cliff monasteries of Meteora.

Originally, I planned to stop through these places on my way overland from Albania to Athens, as there were connections to Meteora in particular. But when my grandmother decided to join me on this portion of the trip, I had to explore options to get there from Athens.

Public transport can be difficult; there are connections to both places but actually getting up to the monasteries themselves, or to the actual site of Delphi can prove difficult without a car. It’s also super difficult to get between Delphi and Meteora without going back to Athens. Logistically, I suppose it was possible, but not with the short amount of time I had with my Nan.

We considered hiring a car but the idea of driving out of Athens seemed more than a little daunting. And it’s also a very long drive up to Meteora from Athens, we would need more than a couple of days to make the trip.

All of those things considered, our best option was hopping onto a 2 day tour of Meteora and Delphi. This tour is incredibly popular and there are multiple tour companies that run this tour. We booked us through Tours-Greece but actually ended up on a tour with Key Tours.

I was at first a little disappointed, because the original tour we had booked promised a mini-bus with no more than 21 people. Instead we ended up on a large coach with a lot more people. Nevertheless the tour was wonderful and if you have limited time it’s something I would recommend doing.

We left Athens quite early and made our way up towards Delphi. The archaeological site of Delphi has been designated as a UNESCO World Heritage List due to its importance and significance as a part of Ancient Greece.

Different parts of the huge complex have different ages, but historians believe this site played an important role as far back at 1400BCE and the majority of the buildings are from 800 BCE.

When we arrived we found ourselves in the heat of the day, which was not ideal. In Athens, Nan and I had made a huge deal of going exploring in the morning before it gets too hot. But there was no avoiding the sun blazing down on the hill that holds the complex of Delphi. But even with all of my clothes and backpack sticking to me and sweat pelting down my face from the heat, I still wouldn’t have sat this one out.

Delphi was most famous in Ancient Greece as the home of the Oracle of Pythia. The oracle communicated wisdom to any visitor through the priestess or sybil of Delphi. In reality such wisdom was most likely hallucinations brought on by some “herb” that they drank in a tea. Nevertheless, the oracle of Pythia is a huge part of Ancient Greece, playing a leading role in many of the legends.

The site itself is huge. Unfortunately the big downside of doing any type of organised tour is that you have to adhere to the pre-determined schedule. Half of our visit was guided, with our tour leader taking us around many of the ruins and buildings and explaining their significance. At this point I was trying to forget how unbelievably hot I was, so I can’t say that I remembered much of that wisdom to pass onto you.

The guided portion stops at the bottom of the hill that leads up to the old sporting arena. It’s quite a trek up there, so the reason the guided part stops here is to give those that aren’t quite up to the climb the option of not struggling up the hill. My grandmother was quite happy to wait at the bottom while I started the climb up.

It was the worth the effort though, I loved the old sporting arena that used to hold something akin to the ancient Olympics. Different parts of Ancient Greece would declare a temporary peace to allow everyone to travel to Delphi to compete in the ancient games. You can still see where the spectators would have sat, and where the athletes would have competed. It was incredible!

After visiting Delphi we had just enough time for lunch before we hopped on the bus for the long haul to Meteora. Greece is a large country, and Meteora is located almost at the very top of it, so it shouldn’t be surprising that it takes about 6 hours of driving to get from Athens to Meteora. I saw a lot of reviews of our tour criticising it because of all the driving, but you can’t expect to cover that much country without a bit of driving.

All that was left was to sit back and enjoy traversing the mountains of Northern Greece. It definitely wasn’t boring out the window!

We arrived in the town of Kalambaka just in time for dinner. Our tour included both the night’s accommodation and dinner in the hotel which ended up being delicious. It wasn’t the fanciest hotel but it was definitely serviceable with good air-conditioning, comfortable beds and a nice bathroom. I didn’t have any complaints.

The next day was dedicated to visiting the cliff monasteries of Meteora. From the town of Kalambaka, we had caught a glimpse of one of the impressive monasteries the night before.

The cliffs and mountains of Meteora have attracted monks from the 9th century AD, when monks travelled up to live in the many caves in search of solitary existence to worship and get closer to God.

It wasn’t until the 11th and 12th century when actual monasteries were built up in the cliffs. By the end of the 12th century there were more than 20 monasteries on the cliffs of Meteora, which literally translates to hovering in the air or above heaven. Today there are only 6 remaining. We visited only two during our trip, although we were able to see all of them.

The monasteries were incredible, full of amazing churches decorated in the typical Orthodox style of gold leaf, icons and biblical stories on the walls. It was great having a guide to explain the meaning of all of this.

But whilst I enjoyed visiting the monasteries themselves, the real highlight is being able to see them from afar. There is nothing quite as beautiful as the monasteries sitting on the tops of the cliffs, surrounded by all that lush greenery. I didn’t expect them to be as green as they were, it was almost like a forrest was swallowing the mountainside.

Meteora is still one of the most unique and beautiful places I have visited in my travels. You look at them and it’s hard to believe that they exist, not to mention that they were built 800 years ago before modern technology. Even if visiting the sight for one morning translates to more than 10 hours of driving, I still think Meteora is worth it.

All that was left to do was grab one of the best meals I had of my whole time in Greece; Soutzoukakia (Greek meatballs) which reminded me so much of my Yia Yia’s cooking. Then it was back on the bus for the long ride back to Athens.

The two day tour of Delphi and Meteora with Key Tours costs €174 and includes entrance to all sites, a night in a hotel, dinner and breakfast. Lunch on both days is at your own cost.