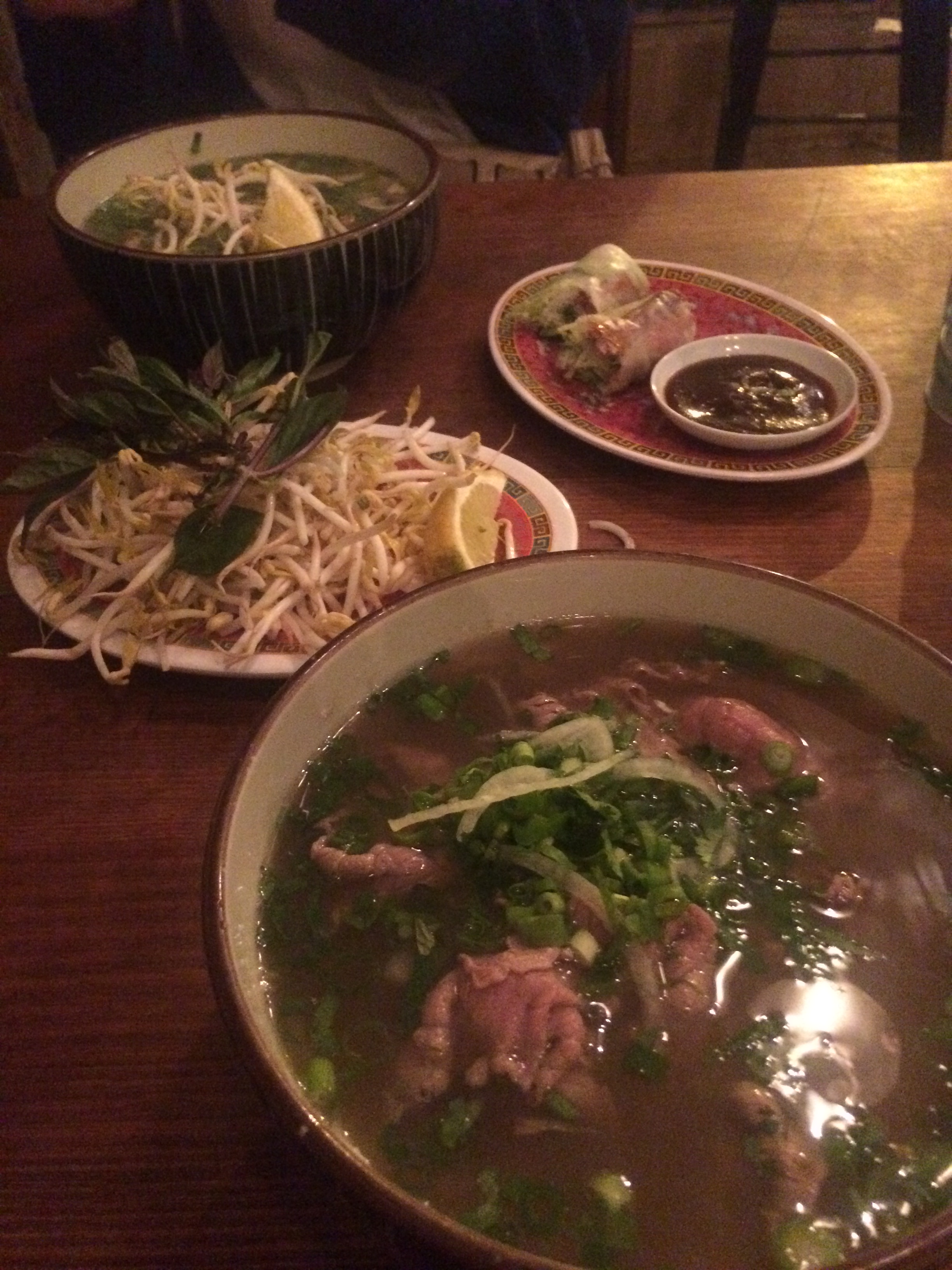 For those unfortunate people who don’t know what Pho is let me explain. It’s a soup made with beef or chicken broth (depending on which flavour you get), to which they add rice noodles, a bunch of yummy herbs like basil and raw sliced beef or chicken that is added at the last minute to cook in the broth. The bowl is brought to your table along with a plate full of bean sprouts, lemon and herbs and you add them to your soup along with lots of chili if you are like me and love your soup hot.

Lucky for me, Australia and particularly Melbourne has a huge Vietnamese immigrant population- with many of them coming over as asylum seekers following our involvement in the Vietnam War. Thus one does not have to venture far to grab a bowl of Pho, although the hot spots for especially tasty authentic Pho are around Victoria St in Richmond, Fitzroy and Springvale.

I never turn down a bowl of Pho so when my friend Bec proposed a late night dinner adventure to Hanoi Hannah in Prahran I jumped at the opportunity. This place isn’t your typical hole in the wall Vietnamese eatery where patrons slurp down a bowl of Pho on plastic stools and woobly tables. It’s got an awesome vibe, the place is beautiful inside and it features a bar that I’ve been told makes some killer cocktails. The staff are all of the young friendly almost hipster variety. In fact just the lack of actual Vietnamese people and the setting of the place would have been enough to put me off without the recommendation of my friend.

Hanoi Hannah is usually crazy busy. I didn’t realise how busy my first time because we didn’t arrive until 9.30pm so the crowd had well and truly moved in. But in subsequent visits since then we have had to wait between 30 minutes to an hour for a table. They don’t take reservations but once you arrive they take your name and number and will give you a call when a table becomes available. Lucky for you there are some nice bars and pubs around so having a beverage while you wait is usually the best course of action. Otherwise sometimes you will be lucky enough to get a seat at their takeaway shop down the road.

Hanoi Hannah Express is a couple of doors down to the main store and specialises in takeaway orders. However it also has about 3 or 4 tables that you can eat at. If you want a nice night out with access to the beautiful cocktails Hanoi Hannah makes and some of their fancier menu items then I would suggest waiting for the table. But when my friend and I went last time we were happy to get our Pho fix at Hanoi Hannah Express. There is no real table service, you have to go up and order and pay for your food and then they will deliver it to your table. But they offer the same tasty, full of flavour and fresh Pho as their main store for the exact same price ($11).

I’ve found from experience that two things make a spectacular bowl of Pho stand out from your average bowl- the first is the broth, some places just don’t spend enough time developing the flavour and it doesn’t have the same punch. The second is the meat, better places will not just have better quality meat in their soup but they won’t have over cooked it. It’s meant to be rare beef, and I’ve unfortunately experienced some rather chewy dry beef strips in my Pho. These two things are also the reason I love Hanoi Hannah Pho so much. It’s so yummy that I keep going back for more- in fact a couple of weeks ago I literally went four times in a week which is crazy considering this place is about 20 minutes out of my way.

I haven’t really had the chance to explore the Hanoi Hannah menu because I think if I ordered anything else I’d just spend my whole meal staring longingly at the Pho on someone else’s table. However I can usually fit in some rice paper rolls with my bowl of Pho. So far I’ve tried the lemongrass beef, the chicken, the yellowfin tuna and wasabi and the peking duck ones. All were really good but I think the lemongrass beef are still my favourite. Handy hint, the rice paper rolls at the main store come out on skewers and are quite dainty but whilst you have less choice at the Hanoi Express store the rolls there are massive and more of the size you would expect out of a normal rice paper roll.

I work about 10 minutes away from Victoria st and I always swear I’m going to branch out and start getting Pho down there but for the moment Hanoi Hannah probably offers the best Pho I’ve had outside of Hanoi.