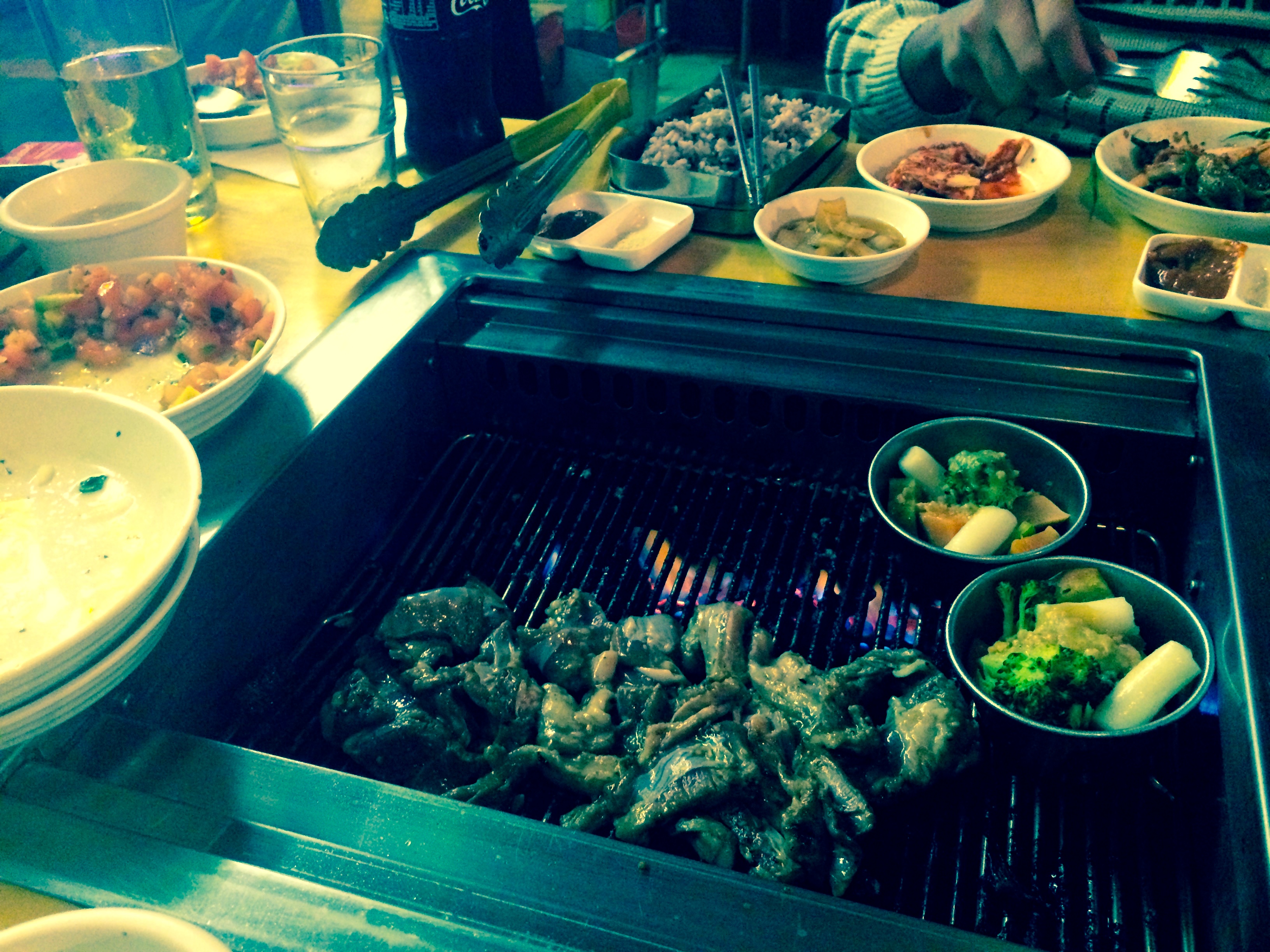 I promised myself that I wouldn’t be doing any travel until I set off on my 15 month trip in November. I should have known better- life, or more accurately debating got in the way and I’m headed to South Korea for almost three weeks in July for the Australasian University Debating Championships.

Of course I couldn’t help myself and I’ve scheduled in 9 days of travel before the tournament in which I hope to head to Seoul, Gyeongju and Jeju Island- so if you have any recommendations about what to do, where to stay and most importantly where to eat please comment here!

So what better way to celebrate my upcoming little adventure than a food review on an awesome Korean place right here in the suburbs of Melbourne.

I had been eyeing off Mrs Kim’s Grill ever since we attempted to go on New Years Day only to find it closed. Luckily enough I got the opportunity to go last month for a friend’s birthday dinner.

It also worked out perfectly because it meant there was a pretty big group of us which in my opinion is the only way in which to experience Mrs Kim’s- it gave us plenty of opportunities to explore the menu.

Mrs Kim’s is all about the Korean BBQ so the menu is pretty simple. It consists of different varieties of meat to be barbecued, a couple of salads and side dishes like vegetables and chips and of course the complimentary sides that are to be expected with any Korean meal.

However you can’t go past the value of the Mrs Kim’s sets. For $39 you can choose the Moo set (Galbi beef ribs and skirt steak), the Oink set (Chilli/Soy Pork Belly and Pork Neck Fillet), the Baa Set (Soy Lamb Ribs) or the Cluck Cluck set (Chilli/Soy Marinated Chicken). A

long with the delicious meat you get a choice of salad- tomato avocado salsa or smoked salmon and onion, or the ssaam veges. All of the sets also come with rice, soup of the day and complimentary sides including Kimchi!

We were a group of 8 so naturally we just ordered one of each and shared everything.

Having never had Korean BBQ I was a bit suspicious of the fact that the grills are located in the middle of the table. I thought that meant we would have to cook the meat ourselves- a novelty thing that seems to be popular these days but I just find weird (the whole idea of going out for a meal is so you don’t have to cook!).

What actually happens at Mrs Kim’s is the cook it for you, in front of you and the grill is also really really good at keeping the meat warm throughout the meal.

The food was super amazing especially combined with the bottle of red I was allowed to BYO in (corkage was annoying per person rather than bottle though so we were kind of sneaky and shared one glass).

I love the idea of a communal meal especially when it involves superb food so Mrs Kim’s definitely ticks all the boxes when it comes to what I look for in a regular food haunt.

I’m not sure what I preferred but if I had to go back by myself or just with one friend I’d probably preference the Oink set (the pork belly was ridiculously yummy) and the smoked salmon and onion salad as I have an obsession with smoked salmon.

The service was pretty mediocre at the beginning, probably because they thought we were waiting for other people to arrive. It did improve but was probably only slightly above the average service I tend to expect at these sorts of places.

To be picky some of the stools were rickety so if you are planning to plant yourself somewhere with a bottle of wine its probably advisable to pick a sturdy stool when you get there. As long as the food arrives in a timely manner and is good I’m not too fussed especially given the value of Mrs Kim’s food.

You do need to book though as this place is ridiculously busy and we went on a Wednesday night- I can only imagine it being worse on a weekend.

If you aren’t, like me, looking forward to a trip to South Korea in the near future, Mrs Kim’s is the place to go for some really good and authentic Korean food!

Mrs Kim’s is located in Carnegie, less than a 20 minute train ride from the city on the Pakenham line. It’s a short 5 minute walk from the station. We spent an average of $25 for drinks (corkage or soft drink bought there) and a meal.