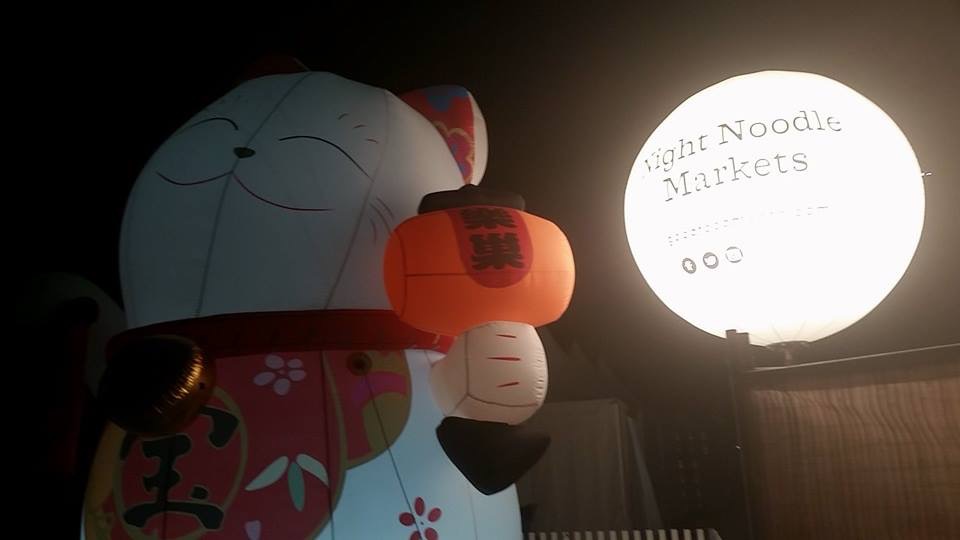 November is a great time to be in Melbourne. If you can avoid the typical four seasons in one day that is almost at its worst in November, then you will probably get a couple of days of really nice pre-summer weather. None of that awful heat of the summer and lots of sunshine.

It’s a bit of a gamble, you also get the cold, windy, thunder storming days in November too. But for the past two years there has been another reason to love November (or at least the last two weeks of it) in Melbourne; the night noodle markets.

The night noodle markets are basically that one thing that makes Melbourne my favourite city in the world all rolled up into one: food, really good multicultural food.

For two weeks in November, some of Melbourne’s best asian restaurants set up little stalls on the banks of the Yarra River showcasing a few of their speciality dishes.

If you can forgive the crowds (or avoid them by getting there very early or very late) you are in for a great mix of atmosphere, culture and spectacular food.

All of the Melbourne favourites such as Chin Chin, Kong, I Love Pho, Mamak and more are there, even Gelato Messina. It’s really everything Melbourne has to offer in food rolled into one beautifully decorated space.

These are the dishes I managed to find room to try. If I had the time and the money I would have gone every night for two weeks in an attempt to try every dish in the place but unfortunately although my appetite is large I was limited in what I could fit in.

These are the dishes from the two nights in a row that I went- although I’m not going to lie some of these dishes I had two nights in a row because they were so good I couldn’t walk away from them even if it meant sacrificing stomach space for a new dish.

Den Fried Chicken from Izakaya Den- $8 for a small, $14 for a large

As we were waiting in line to get cash out from the ATM (seriously the line was huge- do the smart thing and get cash out beforehand) the girls behind us were munching on this chicken and I kept mumbling to my friend ‘please ask them where they got that from’.

One of my other friends managed to use her eavesdropping skills and caught the name of the place ‘Izakaya Den’, a very popular japanese restaurant in Melbourne.

The line for this place was one of the largest and it seemed like every second person walking past had a cup full of this fried chicken. It was almost tempura like in that the batter on the chicken was so crispy but lacked the icky greasiness that usually comes with the fried chicken territory.

It was cooked perfectly and combined with some awesome aioli and a splash of lemon is pretty much as close to food heaven as you are going to get. Let’s just say I regretted only getting the small size. But I made up for it by coming back for a repeat the night after!

Roti Canai with Curry Sauce and Sambal from Mamak- $6.50

Mamak is a newish Melbourne institution. It grew to popularity in Sydney first before coming to Melbourne. I’ve got friends that have raved about it but I’ve never had the time to actually go there and eat it myself. If I’m getting Malaysia food you can bet I’m getting Roti- I must have lived off this stuff last time

I was in Malaysia- particularly the type that they stuff with chicken. Mamak served it in a simpler version, plain roti with curry sauce, or you could get roti stuffed with egg with the same sauce.

I went for the plain version and god it was roti perfection! It had that light, fluffy texture that only homemade, fresh roti has. None of the thickness, greasiness or heaviness of the store bought stuff. Definitely hands down the best roti I’ve had, even better than the stuff I had in Malaysia.

Roti Canai with Curry Sauce and Dahl from Roti Road- $6

On my second night at the market I definitely needed some more of that Roti in my life. I decided to be adventurous and try it from somewhere else.

Roti Road has an equally good reputation and rating on urban spoon so I wasn’t so afraid to leave the familiarity of the Mamak roti. The Mamak roti won hands down- it was a lot fluffier and freshier. Edges of the Roti at Roti Road were a bit too charcoal for my liking and it just didn’t have the same lightness that made the Mamak roti so good.

Although the one thing Roti Road does win on is that Dahl sauce- it was nice having two dipping sauces instead of just the one. But if I got to go back to the night noodle market a third time I would definitely be heading straight for Mamak!

What’s a night noodle market without some dumplings? One of the highlights of Melbourne asian cuisine. I came here both nights- the Wednesday night and the Thursday night. The Wednesday night was much quieter and New Shanghai were very efficient, we paid for the dumplings and they were in our hands straight away.

On the Thursday night, the busier night it was chaos! It was quick to order (once you realised the people milling around were waiting for their number to be called rather than in the line to order), but then it was a very long wait to get your food.

They were very disorganised and could just not keep up- not what you really want at a Noodle Market- even if you are willing to brave the order line you want the food to come relatively fast. And the poor girl who was 20 numbers above me was still waiting for her order that she had ordered at least 10 minutes before us, even though our order was exactly the same.

It was a shambles. However lucky the dumplings were worth it, oozing with juices and having a beautiful taste. None of that fake pork gross dumpling taste was anywhere to be found near these babies. After a 20 minute wait it probably only took me 2 minutes to eat them all. 4 for $6.50 is pretty expensive for dumplings by Melbourne standard- but perhaps they are cheaper in house rather than at the market?

This is the very first stall you see when you come in and the line for it was always huge- no matter what time or day I was there. You are drawn in by the rotisseries of whole pig on show and the small of awesome bbq meat. The meat was juicy and fall of flavour- not your usual dry boring meat skewers.

There is a reason why this place is one of the most popular at the market. It’s seriously delicious! The only downside is the 2 for $10 deal- I really only wanted the one and it would have been nice to get 1 for $5 or something like that. If you are with a friend I’d suggest splitting them. My friends had no belly space at this point so I was on my own!

After finally getting through the huge line for this place we hoped straight into another one and started eating. I could tell the people behind us, not being lovers of seafood like me were not impressed with the look of this dish.

They were really yummy! But really really filing and probably not the best street food wise. They were not cut up very well and very difficult to eat in a street food sense. Would have been better if perhaps they came in smaller pieces so I didn’t have to resort to using my hands. There were also some fried ones other up at another place that looked delicious.

If you are driving (like I was) and can’t be at the Bar this is the next best thing. What’s Asian food without some fresh coconut? I’m a bit of a coconut addict, I routinely buy them from the supermarket and make my housemates mad by taking up all the fridge space and banging them open in the morning (sorry guys!).

This coconut was obviously fresher than what I get off Coles shelves and really balanced out the saltiness in most of the dishes I had had.

I know what you are thinking- what’s a French dessert doing at an Asian food festival? I guess it’s because if there is one market that Asian cuisine hasn’t quite cornered yet in Melbourne it’s dessert.

Hence there was Brûlée, Gelato Messina and some pancakes to fill the gap. While $9 for a small dessert seemed like highway robbery it was bloody awesome.

Everyone good about a creme brûlée- creaminess, full of flavour and a crispy top. Definitely worth the investment and a great way to finish my second night at the Melbourne Noodle Market.

You have two more nights to try it for yourself as the Night Noodle Market is finishing on 30th of November and won’t be back for another year.

If you find yourself in Melbourne in the last two weeks of November the Night Noodle Market is not something to be missed! I’m pretty shattered I’ll be gone on my trip already this time next year and will miss it- although I guess the German Christmas Markets will make up for it!

What to Eat at Melbourne’s Night Noodle Market 2015