Mykonos is Overrated, But Delos is Incredible! 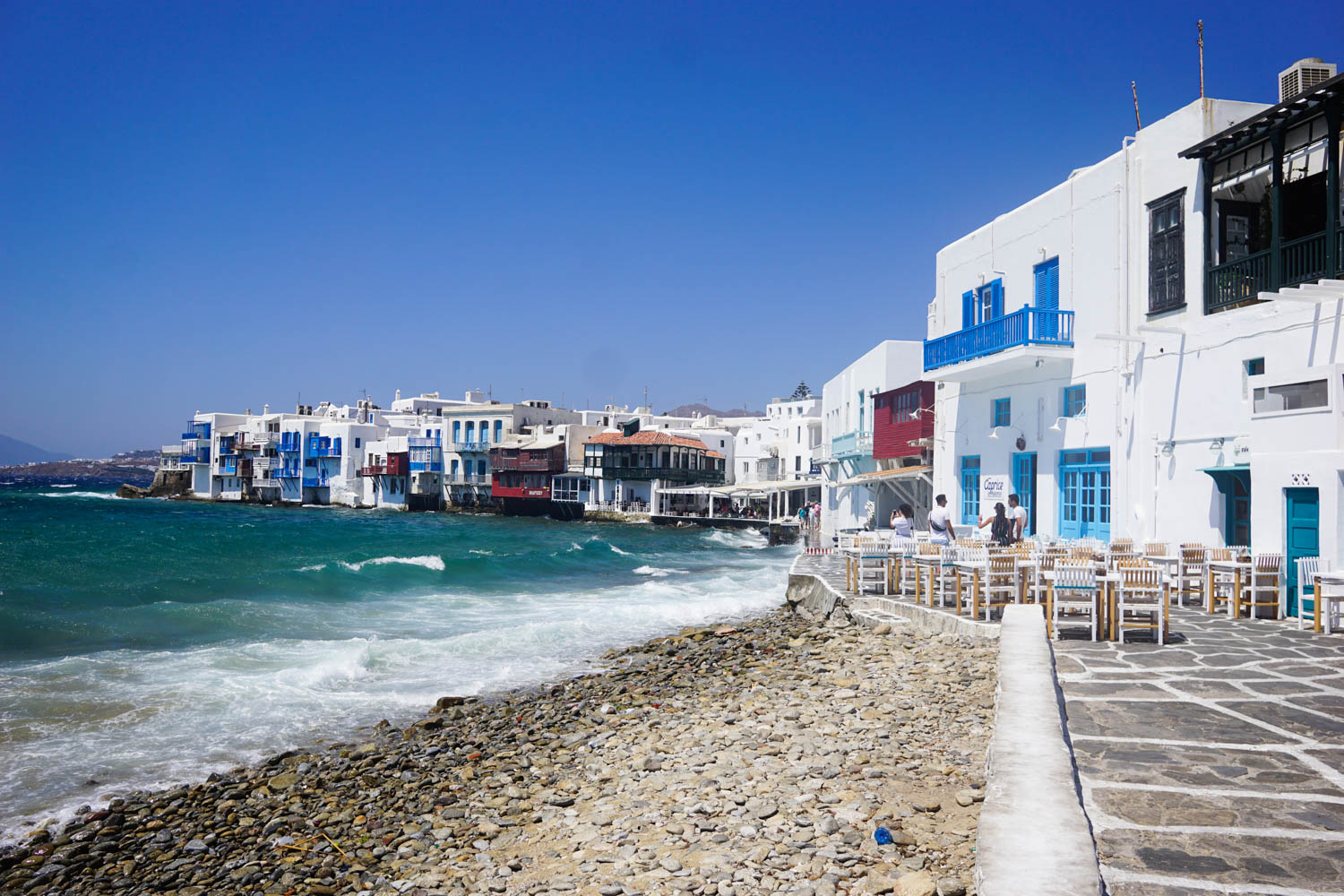 Mykonos, along with Santorini, is one of the most touristy, expensive and crowded Greek islands. Despite knowing this, I felt like I couldn’t leave Greece without giving it a chance.

By the time I arrived in Mykonos I had swapped one travelling companion for another. I dropped Nan off at the airport, and the next morning met my university friend Kristine to hop on a ferry to Mykonos.

When we got off the ferry it was clear that Mykonos is a busy place. The first week of July isn’t even the absolute peak of the summer season, but we still found ourselves disembarking with hundreds and hundreds of other passengers.

It was pretty easy to jump on a local bus into the centre of town and find our way to our guesthouse. The Pension we stayed at in Mykonos was located right in the centre of town, on a beautiful Mykonos cobblestone street and it was even traditionally white and blue.

But with no air-conditioning and one tiny window, it was easily the worst accommodation we stayed in during our whole time in Mykonos. It was one of the first indicators of how Mykonos was not going to be a value destination for us.

We spent our first day in Mykonos wandering around the old town. Like a lot of touristy places, there is a reason that tourists flock to Mykonos. It’s got a beautiful old town that is exactly how I imagined the Greek islands to be.

All of the buildings are a mandatory white and blue colour scheme, the pathways are dotted with white paint to form a cobblestone/pavement like pattern, and there is this beautiful creeping plant with stunning pink flowers that can be found all over the town.

Not to mention it was easy to stumble upon some of Mykonos’ best sights. We checked out the famous Mykonos windmills, we visited the old port and we found lots of churches hidden in the maze of streets.

We even fought the terrible Mykonos winds to catch a pretty amazing sunset from near the windmills.

Myknonos was also home to some sandy beaches that were great for sunbaking and swimming on. We spent time at two of the best and biggest beaches on the island; Paradise Beach and Superparadise Beach. I preferred Paradise Beach. But be prepared with a towel- two sunbeds and an umbrella will set you back €20 which is twice as expensive as the same on any other Greek island.

Also be prepared for the public nudity. These beaches aren’t officially nude beaches, but there is always a few people that get everything out. I definitely saw some penises I would rather have not seen.

Why Is It Overrated?

So why, considering the pretty old town and beautiful beaches, do I find Mykonos overrated. That’s a question that will be easier for me to answer once I’ve posted about all of the other amazing islands I visited in Mykonos. Paros has the same beauty but it is half as expensive and nowhere near as busy. Naxos has incredible beaches and was one of the cheapest islands we visited.

I just don’t think Mykonos has anything that all of the other islands we visited didn’t. And considering how much you have to pay even for a dinner or a hotel room, it should offer something more than just being conveniently located to Athens.

But there is one reason to go to Mykonos on your Greek island trip, and it’s got nothing to do with the island of Mykonos at all. Mykonos is the perfect point from where to visit the nearby Delos.

The island of Delos is a UNESCO World Heritage Site. No one lives on this island except for the temporary works and archaeologists that take up residence. You won’t find any hotels here. Instead you’ll pay a small fee (free for students) to enter the archaeological site of Delos, which is a large majority of the whole island.

My friend and I both wanted to visit Delos for it’s interesting history as essentially a holiday destination of Ancient Greece. But neither us were expecting Delos to be as incredible or as huge as it was. We could have spent all day wandering the archaeological site and visiting a myriad of ancient buildings.

In the three hours we spent on the islands we saw so many incredible ruins; houses, an amphitheatre, old shops and old pathways. It was amazing. We also popped into the Delos museum on the island to see many of the artefacts and statutes that have been removed from their original sight to protect them from the elements.

A return ticket from Mykonos to Delos costs €20. Boats depart Mykonos OLD port almost every hour and it takes about an hour to get there. It was the clear highlight of our whole time on Mykonos Island. In fact if we hadn’t gone to Delos, I might have even regretted adding Mykonos to the itinerary.

But if you are still determined to visit Mykonos, look out for a handy post coming in the next couple of days on how to eat cheaply on the island!