You Need to Go to Montenegro! Three Days on the Bay of Kotor 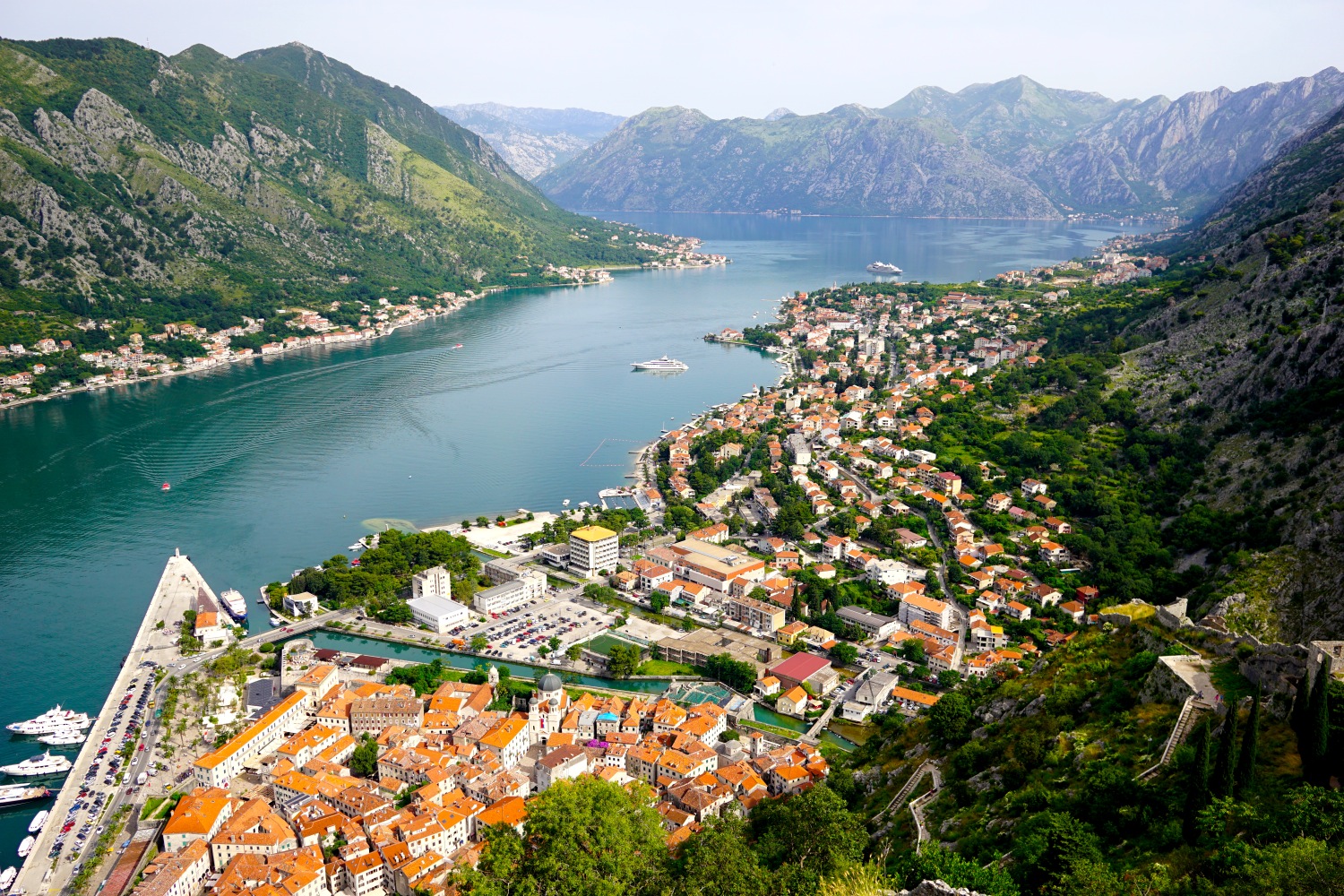 I’m not even sure how Kotor in the little country of Montenegro made it onto my travel itinerary. It was surely a logical stop between Croatia and Greece, and I’m sure I’d seen photos from friends on instagram. Most likely, it was a blog post that made me set my sights on Kotor.

One thing is for certain; I have no regrets about my decision to go to Kotor. I absolutely loved the old city. It was only after I arrived in the tiny town, that I realised that allocating three days to Kotor was most likely a mistake. Especially in light of the fact that I only spent a day in Dubrovnik, which is far larger and has a lot more to offer.

And that’s the crux of my time in Kotor; it’s amazing, incredible, stunning- but you can see everything in a day. Possibly even half a day. It’s tiny. In hindsight I should have spent more time in Dubrovnik or stopped in Tirana to break my trip to Greece up, or even spent more time having fun in Hvar.

But I made the most of my time in Kotor, getting a much needed travel break and taking things slow. I can’t ever regret spending TOO much time in a place, because extra time means a day or two to relax, regroup, write blog posts, watch Netflix, curl up in bed with a book. Lazy days are an essential part of long-term travel.

Not to mention, more time in Kotor meant more time to eat awesome mussels from the Bay of Kotor. Now that is something that I absolutely can’t resent.

There is a regular and easy bus connection between Dubrovnik and Kotor- and this is how the majority of people arrive. That is if they aren’t on one of the many cruise boats that dock here in the summer.

Whatever you do- don’t trust the bus times. Chances are, you aren’t going to arrive on the time listed. By the time the bus waits at both the Croatian border and the Montenegrin border, you’ll probably be an hour if not more behind schedule. Lucky I wasn’t in a rush.

The best thing about arriving by bus is that you get to experience the stunning Bay of Kotor, well before you arrive in the city itself. The bay is a stunning part of the region, and there are many towns scattered around it. Once we arrived at the bay, my eyes were glued to the window in awe of the large, stunning body of water that is the bay.

The famous Bay of Kotor Mussels

If you have read any of my posts from the south of France, or Belgium, you’ll know that a big bowl of steamed mussels is one of my favourite meals. So when I glimpsed the mussel nets on the bay, I knew I was going to be able to indulge my mussel addiction in Kotor.

I ate mussels three times while I was in Kotor, and every time they were the best I have had. They are so incredibly fresh, that it would take a really bad chef to ruin those. Or a chef that gets too excited with ingredients. Mussels are best the traditional way- steamed with basic ingredients like garlic, herbs, olive oil and white wine. These are almost the only way you’ll find them cooked in Kotor.

The old town of Kotor

The town of Kotor is an ancient citadel converted into a maze of markets, shops, hotels and restaurants. It’s very small and it’s difficult to get lost. It was only when I started walking around and exploring, that I realised three days in Kotor was a long time, especially when my hostel was too quiet to be running any of the day trips they usually do.

Whilst small, the city of Kotor is beautiful. I felt the same as I did in Dubrovnik, like I had been transported back in time. I can imagine how the same area would have looked a thousand years ago, the merchants that would have sold their goods on these streets, the donkeys that would have walked the street with wares to be taken over the old road to Podorgica, the people that would have lived there. I love when an old town can instil such feelings in me.

The stunning fortress wall that looms over Kotor is often considered Europe’s answer to the Great Wall of China. I’ve never been to China (something I’m hoping to rectify next year), so I can’t speak about the comparison. But I can speak for Kotor’s old fortress.

To climb up to the fortress you need to be physically fit, it’s a good solid half an hour of climbing up steps. When I was in Kotor, the temperature was a punishing 35 degrees Celsius. There was no way I would have managed the climb in the heat of the day. So I decided to leave the climb until my second day in Kotor, and set my alarm for 7am. I put on good shoes, filled both my drink bottles up and headed out at around 7.30am.

The benefit of starting early wasn’t just avoiding the heat, you usually have to pay to climb the wall, but only from 8am. So I saved myself a little bit of money there. It also meant there weren’t a lot of people on the wall to laugh at how much I struggled, I did have to stop quiet a bit. Although, even if I was super fit I probably would have stopped a lot to take lots of shots of the stunning view.

The higher I climbed in the direction of the fortress, the greater the view over the old town of Kotor and the Bay of Kotor. Even if the fortress wasn’t incredible, the climb would be worth it for the view.

It took a while before I actually arrived within the walls of the fortress. Warning signs marked the way, the Montenegrin government casting a warning about any landslides or rock falls that might occur. The wall was built 800 years ago after all.

The best part about the hike, was being able to walk off the path a little and explore the buildings. I found myself climbing up some very old stairs to what must have been a watchtower, ducking through a tiny entrance gate and fearing into buildings. It’s like a children’s playground for history buffs.

On the way down I cut through this old gate and made my way across to the old road. This zigzagging road used to be the road that took travellers and tradesman from Kotor to the rest of Montenegro, especially the capital Podorgica. I decided to walk in their path, albeit the easier one and walked down to Kotor on this road.

I bumped into cows, goat and one man bringing goods up the mountain on a donkey. It was like nothing had changed!

The hike, the fortress and the view from the top were definitely worth the early morning wake up call.

This little town, near Kotor had caught my eye on the bus from Dubrovnik. I wanted to check it out for myself. It was easy enough to jump on a local bus to the town, although I did end up on a bus to Mostar that dropped me just above the town, not the shuttle bus that goes directly into it.

This turned out to be perfect, as it gave me plenty of opportunity to take some great snaps from the top of Perast.

If Kotor is tiny, this place was miniscule. One main road stretched along the bay, with only a handful of tiny streets leading off it.

The main reason people arrive in Perast is to take a boat to the man-made island in the middle of the Bay, Our Lady of the Rocks. I’d arrived too late in the day to do it properly, so I decided against paying for the boat out there. I was content to gaze at the bay, made even more beautiful by the sun that was glistening off it.

Other than a super spot to view the bay, Perast has a beautiful old church that I snapped photos of, and some tiny streets that I walked along. It was a nice afternoon spent in a miniscule town on the bay.

With a day and a half left in Montenegro, I figured cooling off in any body of water was a good idea. I’d been told to avoid the water directly near Kotor, as it’s slightly polluted from all the boats passing through, but further parts of the bay are recommended for swimming.

When I asked the guy at the hostel desk, he said that him and his friend were heading to a much nicer beach later in the day, and volunteered for me to come with them. Funnily enough, the only people I hung out with at my hostel were the guys working there.

We shared dinner together, went out for beers and sat and chat in the lobby. So I was more than happy to join him and his speedo-wearing, middle-aged Slovak friend called Boris. I’m not sure anyone could be more Eastern European.

We ended up driving about an hour away from Kotor, along some very back tracks, through what seemed like a nature reserve, only to arrive on a built up beach. The one thing I still hate about European beaches is how commercialised they are. But it was an awesome swim, and it’s great to be able to hang out with locals even when I’m staying at hostels instead of couchsurfing.

Where To Stay in Kotor?

If you are a budget traveller or are just looking to make some friends, I always recommend staying at hostels.I stayed at Montenegro Hostel where the staff were great. But it seems like everyone over at Hostel Old Town Kotor were having a lot more fun.


The final word on Kotor

In all honesty, I was kind of glad to spend three days in Kotor. If I spent only a day, I would have climbed the wall and seen the old town, probably tasted the mussels. But I wouldn’t have sought out other things to do, like head to the beach with a Montenegrin hostel worker and his friend Boris.