You Only Live ‘Once’ 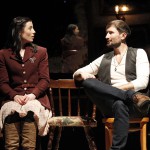 While everyone else was celebrating the end of exams by getting drunk and going to the After Exams Party or some other club, I was marking the end of my second year of university with a night out with my grandparents.

This night out surely didn’t include alcohol (unless you count that sneaky glass of red wine at dinner), or club music or dancing, but a night out at the Princess Theatre.

I’ve spoken before about my love of theatre and how it only recently got rekindled. ‘Once’ was my fourth musical this year and absolutely amazing.

For anyone who hasn’t already seen the movie Once is a rather simple love story, about a down on his luck middle aged musician who meets a young Czech mother on the streets of Dublin . She changes everything for him and encourages him to fulfil his musical dreams.

This story is even better when brought to live on a stage with amazing musicians and beautiful soul-searching songs.

Once isn’t your typical musical. It doesn’t have an orchestra, instead the small cast of less than 20 play the music right on stage including some magnificent guitar, piano, violin and cello. It doesn’t have an intricate and complicated set of sets and special effects.

In it’s simplicity, Once uses one set, a bar with mirrors that enhance the experience as you see a hand playing a guitar in one mirror, or the faces of the cast audience when Tom Parsons is playing music on the bar. While at first the scene shifts seem a tad bit clumsy their quirkiness are what makes Once so beautiful.

The music and the way the cast bring it to life doesn’t make you feel like you are just a voyeur to their stage show. Instead it feels like you yourself are sitting in a pub Ireland while people casually play brilliant music around you.

The inclusion of the audience is only enhanced by the fact that before the show and at interval the audience can actually climb up on stage and buy drinks from the actual bar that they use in the show.

At the beginning the cast came out well before the start of the show and started playing impromptu music that was reminiscent of what you would experience in an Ireland pub.

This pre show show then slowly warps into the beginning of the actual performance and again leaves the audience with the notion that they are watching some private moment with people who love music, rather than simply watching a show that they brought tickets to.

Once left me with a heavy heart. A heavy heart that only beautiful music performed by talented musicians can give you. Tom Parsons’s voice sent shivers down my spine, and when coupled with our very own Madeleine Jones’ voice was really just amazing music that was stuck in my head for the whole weekend after.

Once is an original musical. It stands apart from the many revivals that have been in Melbourne before. Les Miserables, Wicked and the King and I have all featured in this city before, and have been around for a very long time.

Once is a new musical and Melbourne was the first time Australian audiences got to experience it and from all accounts it seems like the vast majority of people loved it just as much as me. They have extended the show due to popularity and I highly encourage everyone to go along to see this spectacular performance!

The Miserable Ones, The Witch of the West and Kingly Visits