A Much Needed Recharge in Berlin 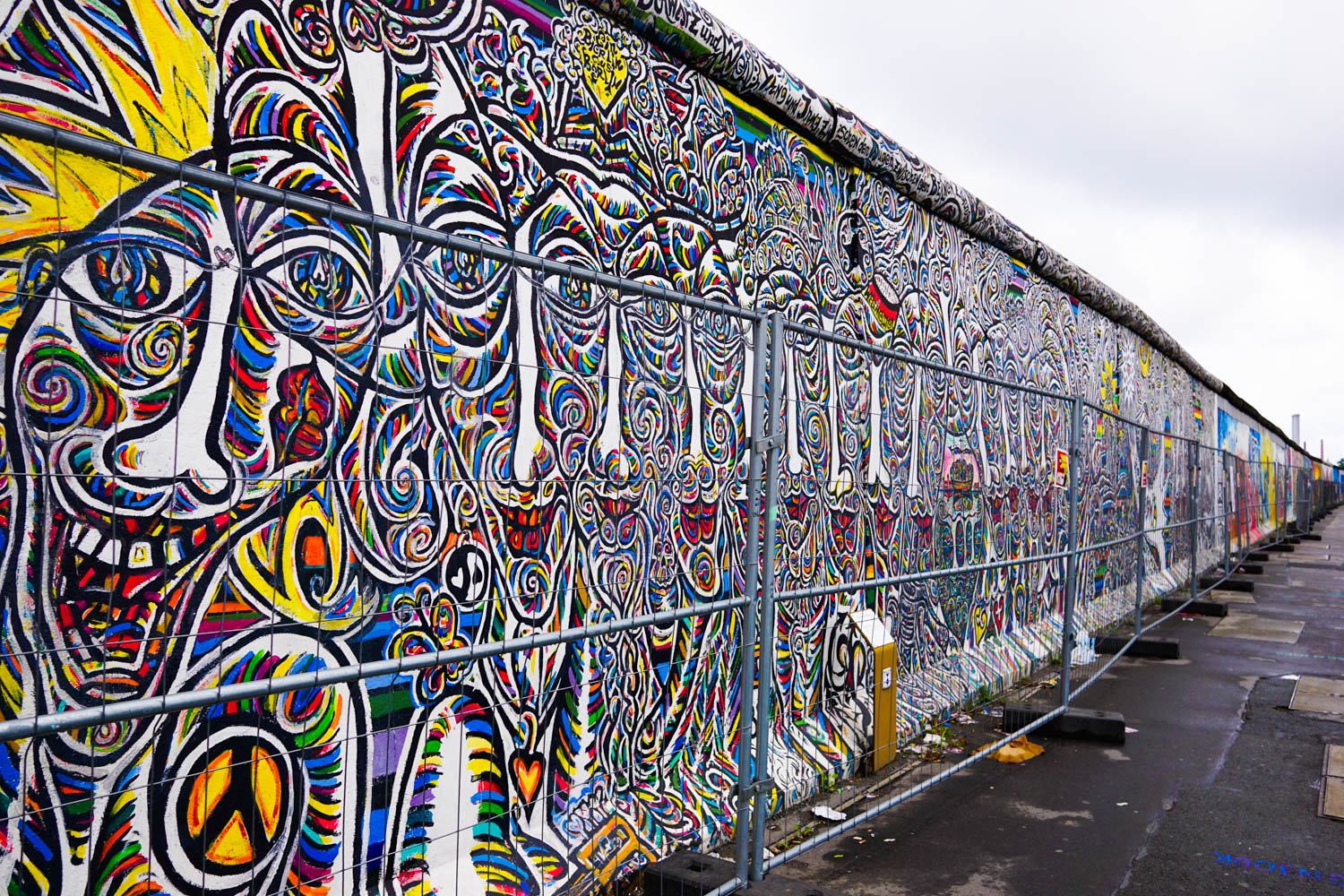 I arrived in Berlin in the middle of a serious bout of travel burnout. The month of travel beforehand had been intense- I’d taken two tours in Ireland and Scotland before travelling with my Pa in Krakow and Prague. I was more than ready to chill out.

Luckily Berlin was the perfect city to do just that. There are lots of amazing museums and some great sites to check out. But experiencing Berlin isn’t so much about checking places off a list. It’s more about chilling out in the city; eating in awesome restaurants, munching down on the world’s best kebabs and hitting some pretty awesome bars.

For someone that needed some lazy travel days, Berlin enveloped me in its laid back embrace. I spent 7 days in the city and I loved every minute of them. It’s definitely a city I’ll be returning to, if only just for the kebabs!

My time in Berlin was a bit of a mix; I spent the first three days with my Pa before he hopped on a flight back to Melbourne. After dropping him off at the airport I headed to my friend Bec’s place where I was staying for the rest of my stay.

We spent our first morning in Berlin exploring the Eastern side. The real reason for us deciding to do this was because of an Australian owned café my friend had told me about it. Both Pa and I were ready for some real Australian brunch and we were super excited to be heading to Silo to find it.

I ordered the baked eggs while Pa ordered some poached eggs, bacon and beans. The meal was delicious but just like whenever I head to an ‘Aussie’ café I am almost always left wanting. Aussies overseas can try and replicate our brunch menus, but at the end of the day the fresh produce in Australia is a major part of the quality of the brunch. And I never get the same taste from those dishes overseas.

But I’ll admit that it’s the best coffee I’ve had since I’ve left Australia. Not surprising considering the barista had a very strong Aussie accent. I swear the majority of Aussies on working holiday visas here must be bearded hipsters that work behind coffee machines.

The visit to Silo gave us the perfect opportunity to check out the number one destination in East Berlin; the East Side Gallery.

It’s often referred to by many as simply the Berlin wall, which isn’t entirely accurate. The East Side Gallery is a part of the wall that used to exist on the East Side of the River that is constantly decorated with some pretty amazing murals. I loved wandering the wall, stopping every now and then to think about the message behind some of the murals. All of them are a running theme; the need for peace and happiness. But some of them reflect new challenges that we might not have known existed when the wall fell- such as climate change.

It’s an experience you don’t want to rush. We spent at least an hour walking the small stretch of wall. Unfortunately it wasn’t the greatest place for snapping photos as the scaffolding that attempts to keep the stupid graffiti scoundrels out blocks some of the views. But I loved it nevertheless.

Knowing that I was feeling burnt out, I had the idea to hit most of Berlin’s tourist sites on the first day. I’d hope that would give me the opportunity to chill out and take it slower for the rest of the time. So we used our unlimited metro pass to head to the Brandenburg Gate.

It’s a frequent stop for any trip to Berlin but can be slightly underwhelming. I was happy to snap a photo but after that I was ready to move on to the next place. If you want to learn more about the history of the gate you can jump on any of the multiple free walking tours that leave from the square directly above the gate.

The Memorial to the Murdered Jews of Europe

This is one of the most moving places in Berlin, and where you’ll be able to find a museum outlining Berlin’s role in World War II and the holocaust.

It’s a moving place, even if at first glance it can just look like a bunch of concrete blocks stacked parallel to each other. According to its artist it is meant to make you feel uncomfortable, and feel like a cold impersonal crowd that has lost touch with human feeling and morality.

Unfortunately, as has happened to me in quite a few places, some of the people visiting the memorial didn’t give a shit about its significance. Running around the concrete blocks, playing hide and seek and laughing like lunatics is definitely not appropriate for a place that is meant to memorialise the hundreds of thousands of people that died in the war.

I made my opinion on the matter quite clear to the stupid people and they walked off in a huff. It drives me crazy how insensitive people can be, and after it happened to me at the Dachau Concentration Camp I had vowed to speak up about it.

The Best Kebabs in the World!

“The kebabs in Berlin are amazing!”

Almost everyone I knew that had been to Berlin repeated these sentiments. As someone who is obsessed with kebabs, gyros and all other wrapped things I was beyond excited to try the Berlin kebab.

A quick google search led me to Gemuze Kebab on Kastanienallee that wasn’t far from where Pa and I were staying. €3.5 euros got us a kebab with the lot; wrap bread full of rotisserie chicken marinated in this insanely good sauce, roasted vegetables, three types of delicious salads, three types of sauces including my favourites of chilli and garlic sauce, some cheese and a squeeze of lemon. The result was the best thing I had put in my mouth in a very long time, and by far the best kebab I have ever had!

I ended up going back three times and when I returned to Berlin to catch my flight to New York I was very disappointed that I didn’t have time to head back into the city just to get this kebab. It’s one of the cheapest dates in Berlin and it’s always delicious!

A visit to Berlin wouldn’t really be complete without a visit to this imposing building. I have it on good authority that the tours of the inside are amazing but Pa and I couldn’t find availability for an inside tour during our stay. We only had time to snap some photos out the front.

I arrived in Berlin during a surge of unseasonably warm weather. The sunny was shining for the majority of my visit. So I grabbed my kindle, my beach towel and some pretzels and headed to Tiergarten park.

I spent an hour or so wandering around before finding a perfect spot on the grass to lie in the sun and read my book for hours. It was an amazing way to spend an afternoon and exactly the sort of recharge I needed.

My friend Bec worked as a barista in Kreuzberg, one of the districts known for its Turkish influences. On one of the days she finished early afternoon she offered for me to meet her at work so we could explore this part of Berlin.

We headed straight for the Turkish market that, despite its Turkish roots, was as Berlin as you could get. We found an infamous Berlin street artist performing for a bunch of people that had sat on the ground by the river and listened to him do his thing. He was completely bizarre and completely Berlin. Everything goes in this city.

I found some delicious Gozleme to satisfy my Turkish cravings and some vegan donuts that were 100x better than they sound!

After we had enough with the market we headed out to do some vintage shopping, as you do in Berlin. Despite the lack of room in my bag, I got convinced to buy a gorgeous denim jacket. They usually never look good on me but this one was awesome- so I just had to go back and buy it the next day after I had been mulling it over for ages.

We ended our day with a few cheeky wines at a gorgeous wine bar!

My Favourite Brunch in Berlin

On my last day in Berlin I decided to try out another Australian café for brunch. I desperately needed a fix of smashed avocado with poached eggs. So I headed to Father Carpenter and was not disappointed. It’s still the best brunch I’ve had outside of Australia and bet Silo by miles. Their coffee, and their chai (I stayed there for ages) were also exceptional.

This UNESCO listed “island” in the middle of the river in Berlin is home to some of Berlin’s museums. I really planned on visiting more museums in Berlin, but only managed to head to one; the Pergamon Museum.

It’s home to some amazing reconstructions using ruins discovered in what is now the Middle East and Northern Africa. Unfortunately the Pergamon Altar, the most famous reconstruction was closed for repairs during my stay.

But I still found the Ishtar Gate and the Market Gate of Miletus to be absolutely amazing, along with the other artefacts in the museum. Just be aware that the museum is super popular so you might be waiting a while to get in!

I still can’t believe I spent a whole week in Berlin, including a full weekend and didn’t end up going out and experiencing what is meant to be an amazing nightlife. Looking back, I just wasn’t in the right frame of mind in Berlin. While I was quite happy to drink beers with my friend at her place, I wasn’t quite happy to be heading out.

It’s the top of my list for my return to Europe, because I’m not sure I’ll quite feel like I’ve ever visited the city until I’ve experienced it.

What to Do in Amsterdam: The City of Museums, Canals, and Bicycles