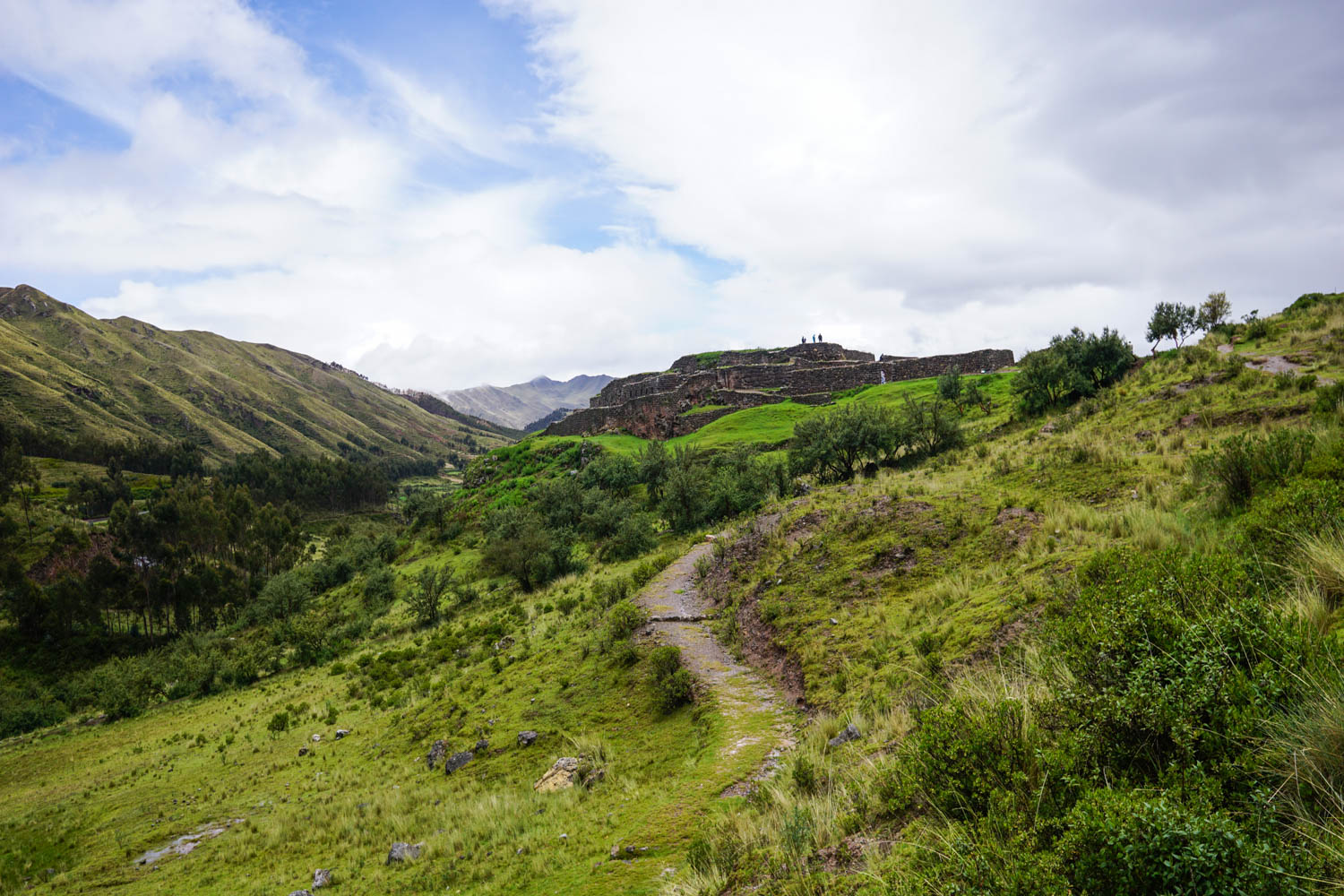 After three days and nights of non-stop partying in Cusco, I thought it was time I got out of the city and did some sightseeing. Exploring the Inca ruins located just outside of the city proved a perfect opportunity to get some fresh air, snap some pretty pictures, and have a break from the party atmosphere of the Wild Rover.

Machu Picchu, a day or two-day trip from Cusco gets all the attention. So much attention in fact that it’s easy to realise how people forget about the other Incan ruins scattered around the region. Four of these ruins are easily accessible from Cusco; Tambomachay, Puca Pucara, Q’enko and the most famous of the four- Sacsayhuaman.

Most people only head to Sacsayhuaman by foot from the city. Or they hop on an organised tour that might take you to all four. But by far the nicest way to see all four of them is to get a taxi to Tambomachay, the ruin furthest from the city and make your way back to the city on foot, past the rest of the ruins.

Of course, you can do it the other way, walk to all four and then get a taxi back. But the benefit of getting dropped off at Tambomachay first is that the rest of the journey back into town is mostly downhill. It’s also not super steep downhill so you won’t fell too much of an ache on your leg muscles. Hiking up hills is something that I like to avoid at the best of times, and most especially when at altitude, so this was the perfect solution.

I set off with two friends from my hostel so it was a reasonable expense to split the taxi fee to Tambomachay. We were then able to buy a combination ticket that included entry to all four ruins.

Tambomachay gives you an indication of just how sophisticated Incan engineering and construction was. Even hundreds and hundreds of years later, water still flows through the system of aqueducts and streams built into the three levels of ruins at this site.

Exploring this site proved a little difficult because there were a lot of tiny paths that seemingly led to nowhere. We ended up wandering around the ruins and the hill surrounding them in to get the best position for a photo of the ruins.

A short walk down the road and we arrived at Puca Pucara. If we thought Tambomachay was small, this stop was even smaller. Puca Pucara served as an old fortress and vantage point for the Incans. A lot of people don’t rate this temple and it was devoid of tourists. But I thought it was a beautiful, short stop. I’ve always loved fortresses! I loved wandering around and into what would have been the fortress.

The walk from Puca Pucara to Q’enko was the biggest of the day, taking about an hour and a half. Mother nature wasn’t our friend this day and the work was made harder by the rain that started to come down. Luckily it never got heavy enough to really bother us! We also had a little giggle when we drove past some locals who were hot-boxing their car in the middle of the day!

Q’enko is special in that the buildings, tunnels and passages are carved into one large rock. If I was a kid with the whole space to myself it would be the perfect place for hide and seek or kiss chasey. Q’enko made me realise exactly the kind of rock the Incans carved into to build these small communities and fortresses. To think they did this without modern machinery is incredible.

The uniqueness as well as the sheer fun of exploring the tunnels made Q’enko my favourite stop of the day.

As we made our way down the hill past the ruins, each ruin got progressively busier with tourists. This peaked with Sacsayhuaman. Towering on the hill over Cusco, most visitors to Cusco don’t leave the city without visiting this ruin. There is no doubting that out of the four, Sacsayhuaman is the most formidable. We spent almost as much time exploring this ruin than we did all the other three together.

It’s all the perfect spot to get a view over the town, especially from the Jesus statue on the hill nearby.

The ruin is a bit of a maze and I did regret not having a guide not only to help me get around but to explain more about the ancient site. If it’s in your budget it might be worth doing! Our visit was also ruined a little bit by the persistent rain. I still loved exploring this ruin, but I didn’t spend nearly as much time as I would have because we were feeling a little miserable from the rain.

When we finally started to make our way back down the hill and spotted a small restaurant we stopped for a small snack and warm cups of coca leaf tea. It was the perfect way to warm up and to help with the altitude sickness I had been fighting off all day!

If you are looking for something to do in Cusco other than wander the old town or go to Machu Picchu, a day at the Incan ruins is a perfect little adventure!