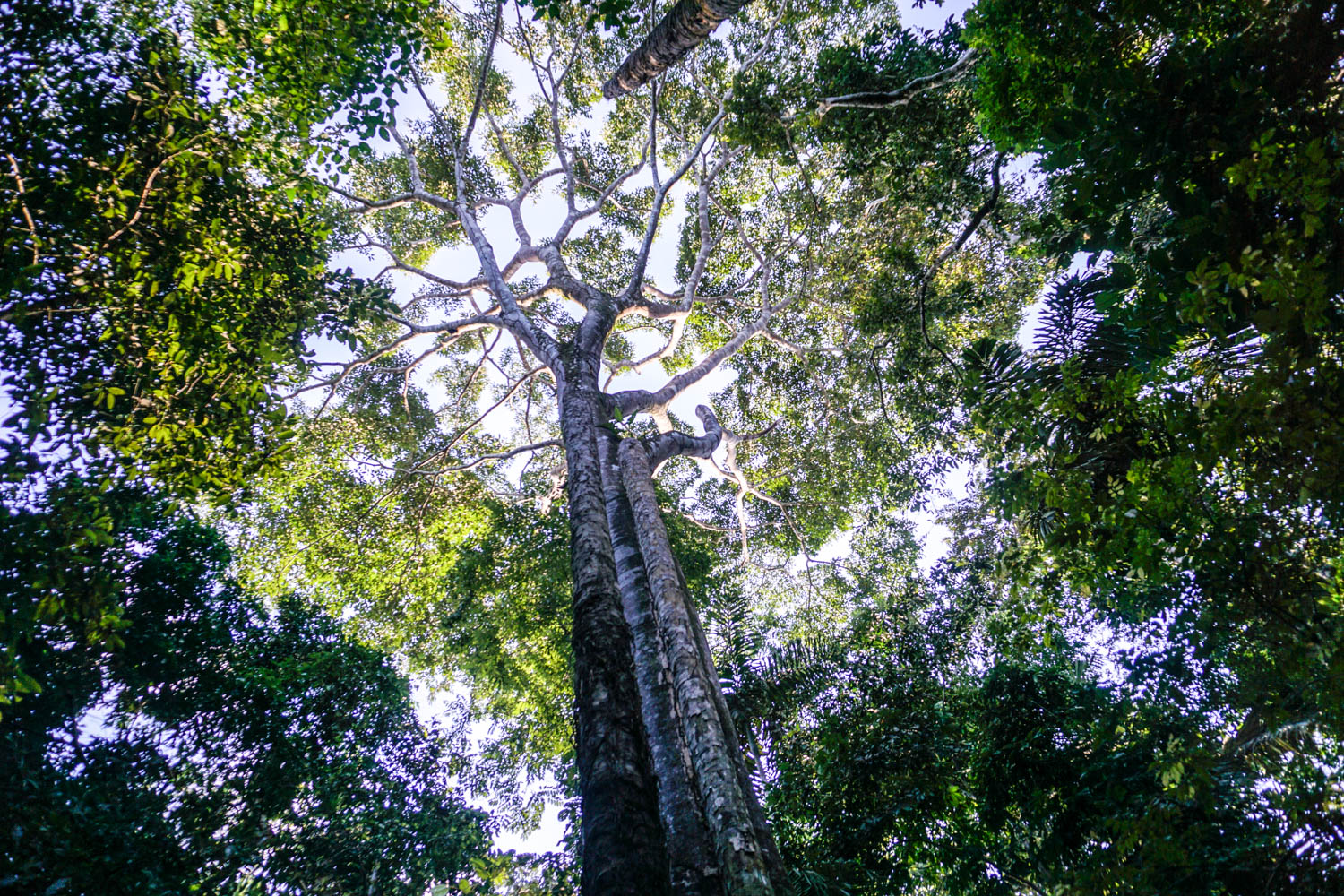 Along with the Galapagos islands and Machu Picchu, the Amazon Rainforest was a bucket list item that I was excited to tick off while in South America.

I remember watching a documentary about the jungle when I was younger and instantly promising myself I’d visit one day. My passion to visit only grew with more documentaries and even through random films or moments such as watching Rio. It was one of the reasons I was so drawn towards backpacking South America in the first place.

But probably the most difficult thing about visiting the Amazon Rainforest is deciding exactly where to do it. The Amazon is ridiculously huge and covers a significant part of the continent of South America. You can visit it in Colombia, or Ecuador, or Peru or Bolivia or Brazil. I found myself overwhelmed with all of the choices and I spent hours researching different places and different experiences.

I settled on accessing the Amazon from Puerto Maldonado for a few reasons. Firstly, it was a very accessible point. I didn’t need to spend hours and hundreds of dollars on a flight that would get be there. With the new highway that’s been built between Puerto Maldonado and Cusco you even get there on an easy, albeit slightly frightening, overnight bus. Secondly, and most importantly, the one animal I absolutely wanted to see while in the Amazon was Macaws. And Puerto Maldonado, specifically Tambopata Research Centre, was supposed to be the best place to see them.

I came across Tambopata Research Centre when I was google searching possible Amazon trips one day. Tambopata Research Centre is a secluded jungle lodge located about an eight hour boat ride up the river from Puerto Maldonado. It’s the only jungle lodge that is in the actual Tambopata River Nature Reserve and thus is super secluded. The seclusion of the lodge means that the animals are more abundant and you have a much better chance of spotting animals far above the rainforest canopy. The lodge is called the research centre because it’s the home of the Macaw Project, where researchers from all over the world travel to  to conduct research on the many macaws that live in the area.

Whilst the Tambopata Research Centre ticked all of my boxes, it definitely wasn’t a backpacker trip. I spent more on my 6 days in the jungle than I did on any other single activity during my 15-month trip. But I was determined to visit and set aside money specifically so I could make this experience happen. I don’t regret one minute of it.

I arrived on a flight from Lima and was promptly greeted at the airport by a member of the Rainforest Expeditions group that run Tambopata Research Centre along with a few other lodges on the Tambopata River. We headed to their office in town for a briefing and so that those with huge suitcases could leave their big luggage behind and pack a small one for the trip up the river.

Given that it takes eight hours to reach Tambopata Research Centre, my first night was spent at Refugio Amazonas, a beautiful lodge halfway up the river between Puerto Maldonado and Tambopata Research Centre. That first couple of hours up the river to Refugio were disheartening as it rained the entire time. This had me completely worried about the next six days of my trip. I was thinking I’d spent thousands of dollars on a trip that was going to be completely rained out. Luckily the bad weather didn’t last!

Refugios Amazonas is a more popular trip than the Tambopata Research Centre, and most people on my boat were stopping there. In terms of the facilities and rooms, Refugios Amazons had one up on the Tambopata Research Centre. I immediately fell in love with the lodge. My room, with its own ensuite had a beautiful canopy bed with a gorgeous mosquito net and the most amazing fresh and clean sheets (you seriously don’t get that level of a comfort at a hostel, no matter how good). I even had my own hammock in my room where I could kick back and read my book.

And the best part of staying at an Amazon lodge? There aren’t very many walls. I had a wall to block me from the room next to me, and one leading out to the main walkway. But one whole side of the room was open air. Literally just me and jungle and my hammock. You really feel like you are in the middle of nature and the five nights I spent cosied up in a comfy canopy bed with an awesome mosquito net were incredible. I really had to pinch myself.

After a very early morning start and a quick walk to and up the canopy tower, we set off once again on a boat up the river to our final destination of Tambopata Research Centre.

We stopped on the way to our very first claylicks! Clay licks are where Macaws and other birds hung over- they get a heap of nutrients from licking the claw. On my first full day on the river I managed to find the bird I’d come all the way to the Rainforest to see. We spotted blue macaws and red macaws and all of them were so incredibly beautiful. The first time I got to hear them squacking and watch them flying around was one of the highlights of my whole trip.

The research centre doesn’t have the same facilities as Refugios- when I was there the bathrooms were shared (but they were kept super clean and they were very nice). I definitely missed the hammock I had in my room at Refugios but at least I still had the incredible canopy bed and the view out into the jungle. The lodge was closing for renovations just after I left, and I’d heard that the rooms were going to be updated to have ensuite bathrooms and hopefully those hammocks!

My typical day at Tambopata Research Centre started around 4am. The early morning wake up call was necessary to head to the claylick closest to the lodge. Loaded up with gumboots and small chairs to sit on, we would usually arrive at the claylick before any of the birds had arrived. It was then a matter of waiting, watching the sunrise and marvelling at all of the birds flying in to the claylick. I spotted so many different varieties of macaws, some parrots and even a toucan.

We would arrive back at the lodge just in time for breakfast which was always a full spread with delicious free juice, fruit, eggs, beans and ham. I’d then head back to bed to catch another hour or two of sleep before our first jungle walk began at 11am. Different days took us on different tracks around the reserve. On our walks we spotted so many different types of monkeys, including the infamous howler monkey that often woke me up before my alarm every morning. I loved the spider monkeys!

We also saw some caymans- a crocodile that is common to this part of the Amazon. The infamous jaguars are ridiculously hard to find, especially during rainy season when the river is high because they don’t tend to venture out by the river. One day we spent an hour following the tracks of a jaguar, and even heard it yowl but unfortunately couldn’t spot it.

It is hard to find anything, and take photos of it with the cover of the canopy. But even the afternoons we didn’t spot anything, I just loved being in the jungle and wandering around it. It felt very magical and mythical!

Would I recommend Tambopata Research Centre?

It was comfortable (and will only get more comfortable with the upgrade), the staff were amazing, the food was delicious and in abundance, and all of my jungle guides were knowledgeable. Given the amount of researchers that work at the lodge, we also got the pleasure of nightly talks on the macaws, the Macaw project and the wildlife around the lodge which only added to the experience. I even happened to be in the Amazon for New Years Eve and it was a fun night with the visitors, the researchers and the staff all celebrating together.

I did have one gripe though. Every single person or couple on the trip had their own personal guide. This guide stayed with them from the Rainforest Expeditions Office all the way back to the office at the end of the trip. It didn’t matter on your group size, everyone got their own. Except me. For some reason I just kept being attached to other groups and I went through five or six guides during my six days at the lodge. And it wasn’t because I was travelling alone- another solo traveller had her very own guide as well. It was something I put on my feedback form and they did cover my drinks bill as an apology. But given how much money I spent on the trip I’m still feeling a little disappointed about their lack of organisation on this front.

Regardless I think Tambopata Research Centre is one of the best ways to see the Amazon and I absolutely loved the time I spent there.