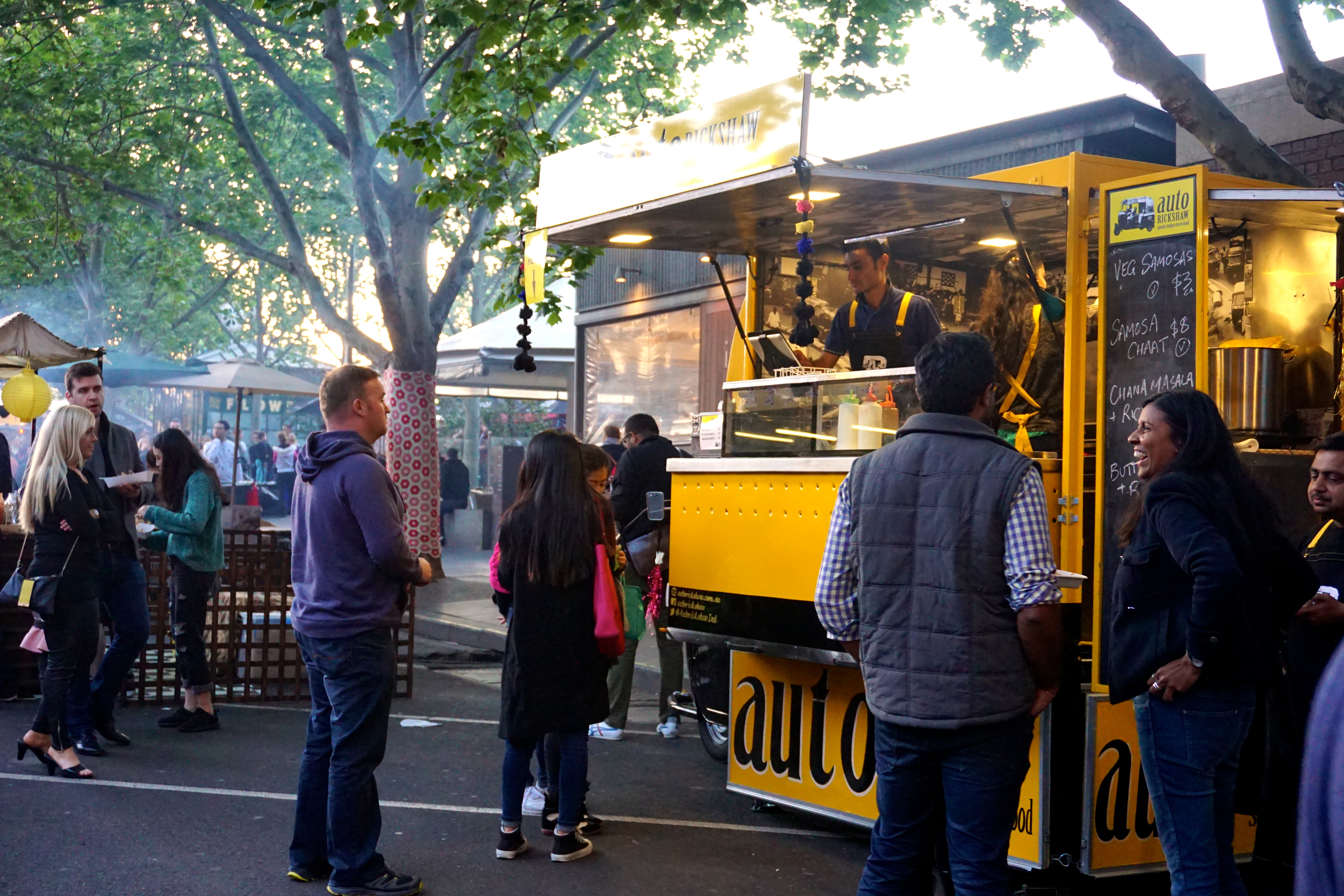 I’ve made no secret of the fact that Melbourne is my favourite city in the world. And although I’m going to be visiting hundreds of new cities and places over the next 15 months I don ‘t think any city could take Melbourne’s place.

Although I only moved to Melbourne just under three years ago, I’ve fallen completely in love with this city. It’s now home.

And nothing makes me happier than heading out to explore this city on a Friday night. Especially when that exploring involves eating copious amounts of food.

Last Friday, as an end of semester celebration, some friends and I went to Stir Frydays.

Stir Frydays is a pop up food festival running for 8 weeks worth of Fridays between the 9th of October and the 27th of November. You’ll find it in one of the most historic places in Melbourne; the Queen Victoria market.

Stir Frydays is home to 17 different food carts and trucks all serving up some sort of Asian cuisine. If you aren’t partaking in Ocsober like I am, there are also lots of bars where you can grab a drink.

I made sure I only had a small lunch so that I’d have extra room to be able to try as many dishes as possible. Luckily, I shared a lot of these dishes with my friend, Joel, so that meant we got to try a wider range of plates.

For those of you not following along on my snapchat story that night (catch me next time at ‘brittytt), this is what I ate:

My housemate, Molly, had been to Stir Frydays the week before and especially recommended I order this particular dish.

Bao is short for ‘Gua Bao’, a Taiwanese street food consisting of steamed flat bread wrapped around a slice of pork belly. You’ll find this dish on many of the best Asian fusion dishes in Melbourne.

Lil Nom Nom’s Bao was amazing. The bread itself was not too dry or heavy and the pork belly was cooked to perfection. But what made this dish so delicious was the addition of the perfect amount of sweet Hoisin sauce, coriander and chilli Sirachi sauce (my favourite). Let’s just say I was in food heaven.

These guys are a super popular food truck in Melbourne, but I didn’t think the fried chicken was too magical.

It was yummy; the chicken wasn’t too dry and the addition of mayonnaise was perfect. But I think since my Korean adventures I’ve become the world’s biggest critic when it comes to fried chicken.

Nothing is ever going to beat Reggae Chicken and their magical green sauce.

This is the longest line at Stir Frydays and for a good reason. This Pilipino street food cart has a cult following.

I’ve eaten at Hoy Pinoy previously, when I went to the Night Noodle Market at the end of last year. They were delicious when I had them back then but the ones I had on Friday night were even better.

I had to wait 10 minutes for the next batch of pork skewers to be ready. So when they finally arrived they were freshly cooked. This made all of the difference. The banana marinade is simply to die for.

Korean and American fusion is all the rage on the food scene at the moment.

I was finally ready to eat kimchi again after practically living off it when I was in Korea in July.

I had seriously forgotten how much I loved kimchi until I was stuffing fries in my mouth that were slathered in chilli mayo and topped with kimchi (and a little bit of pork).

These guys take loaded fries to the next level and I was a huge fan!

I used to always be a big sweet tooth but lately I’ve found myself craving salt more than sweet.

But that all went out the door when I saw (and smelt) the donuts that Bang Bang were frying up at their stall.

I went all out with the ‘Whole Shi-Bang’ option and got the donut filled with salted caramel, marshmallows, popcorn and a scoop of ice cream. They then topped it with peanut butter topping and biscuit crumb.

I haven’t enjoyed eating something so much in a very long time. I was a puddle of food joy after devouring this in five minutes flat.

The donut was the perfect combination of crunchy on the outside but a little bit undercooked and doughy in the middle. Combine that with some ice cream, salted caramel and peanut butter and I could almost (ALMOST) give up travel just to sit there and eat these all day, every day.

I swear this isn’t even me being hyperbolic; they were literally that good!

Stir Frydays is everything a spring Friday night in Melbourne needs; good food, (hopefully) good company, beers and music. You’ve got 5 more Fridays to get your butt there!