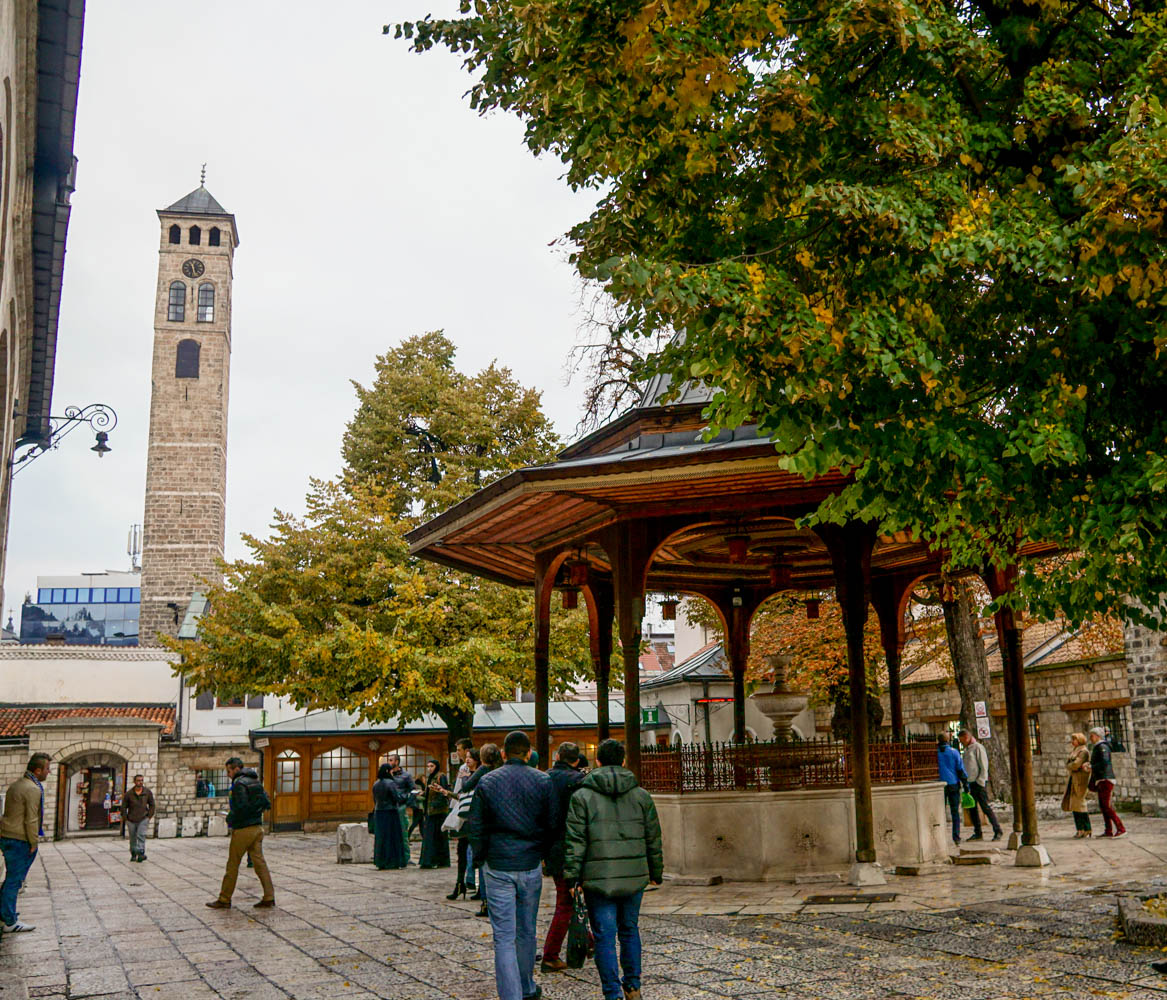 Bosnia and Herzegovina is seriously a history lover’s dream. I’ve always loved studying the history of the World War I and World War II and I’d spent months in Europe visiting the sites of famous battles, experiencing the sadness of concentration camps, devouring the information at museum after museum and even attending the ANZAC day dawn service at Villiers Bretonneux on the Western Front.

So, of course I had to visit Sarajevo, the scene of the assassination of Franz Ferdinand which would be the catalyst for the beginning of World War I. What I didn’t expect from Sarajevo was that I’d soon forget about the World War History and be thrown into the story of a more recent war- The Bosnian War.

I loved exploring both histories and both sides of Sarajevo. I never expected Bosnia to be my favourite country in Eastern Europe but it most definitely had me falling in love!

A Walking Tour of Sarajevo

My journey to Sarajevo was a bit of a hard one. I decided it would be super smart to stay out all night in Belgrade, leave the club at 5.30am and hop straight on my 6am shuttle to Sarajevo. Luckily the minibus was pretty empty and I was able to sleep most of the six hour journey.

After grabbing some soup in the hopes of helping my poor failing immune system I crashed in the hostel. It was probably a good thing that I was travelling with my friend Ross who had met in Latvia, because he was determined to get me up and out of bed so we wouldn’t waste the day completely.

Hopping on an afternoon tour of Sarajevo was the perfect way to kick start my brain again. Given that I knew next to nothing about Bosnia, this tour was fantastic.

Of course, one of our first stops was the exact spot where Franz Ferdinand was shot way back in 1914. There is a special plaque to commemorate the occasion.

But the highlight for me was being able to learn about the diversity of Bosnia that stretches back hundreds of years. Bosnia has always been a mish-mash of cultures and religions- Catholics, Jews and Muslims have lived side by side in Sarajevo since basically the beginning of the city.

And it is this diversity that makes Sarajevo such a special and unique city. The Turkish and Muslim influences can be seen everywhere. One of my favourite parts of the city is the Bascarsija- the traditional Ottaman bazaar. Given I was still devastated about having to cancel my plans to Turkey, I was delighted to get a little taste of it by exploring the various shops that make up the Bazaar.

But just a few blocks from the Bazaar and the Mosque that make up the more ‘Muslim’ side of Sarajevo, we stumbled upon the more Catholic parts of the city. The main walking street and the Cathedral are reminiscent of the Christian parts of most European cities. It almost felt like we were visiting two different places; although they seem to coexist in a beautiful way.

It’s very East meets West and I don’t think you can get a similar experience in most parts of the world.

Whilst I loved the parts of the walking tour where our guide discussed the assassination and the cultural diversity of Sarajevo, the most interesting parts were those to do with the Bosnia War.

The Bosnia War refers to the conflict that occurred in Bosnia between 1992 and 1995. It was precipitated by the breakup of the Yugoslavia which resulted in a conflict between three cultural groups; the Bosnia Serbs supported by the Serbian Army, the Bosnian Croats supported by Croatia and the Bosnia Muslims. But if I learned one thing from the short time I spent in Bosnia and Herzegovina, it’s that this conflict can’t be thought of in such simple terms. There were Bosnia Christians and Bosnian Jews that died defending Sarajevo from the Serbian forces. There were also Croats that helped their Muslim friends evacuate from Sarajevo and Mostar. It’s a complicated picture.

The Sarajevo Siege Tour is one way you can try and make that picture a little clearer. It is a half day tour where you are taken around and outside the city to some of the most important and significant sites of the Bosnia War as it occurred in Sarajevo.

For 1,425 days during the war Sarajevo was a city under Siege. They were virtually surrounded by Serbians forces and were forced to rely on the UN, who had control of the airport, for meagre staples. People took the windows out of their houses, despite the harsh winters, so that the glass couldn’t kill them when they came under artillery fire. Some parts of the city could only be navigated at your own personal risk because of sniper fire.

Throughout the city, Sarajevo roses- splashes of red paint that look like blood splatter- commemorate those that fell during the Siege.

By the end of the Siege more than 13,000 people, including more than 5000 civilians had perished in the city and two Serbian officials were convicted of crimes against humanity.

It’s a very intense story and one that we learned progressively throughout the day.

The first stop of the day was the infamous Sniper Alley. This is the main boulevard that still connects the modern parts of Sarajevo with the old town. It was dubbed Sniper Alley during the war because the position of the street and the high rise buildings in the area meant that the area was rife with snipers.

The Tunnel of Hope

This was my favourite stop of the whole day. The Tunnel of Hope is a war tunnel that was dug by those defending the city as a way of moving people and supplies in and out of the city. The tunnel became an essential part of the war effort, as people could escape to safety and were also able to receive the food that was essential for survival. It also allowed soldiers to move out beyond the mountains to re-join or join the fighting that was occurring there.

But more than the practical benefits the Tunnel of Hope is named for the symbolism it had in Sarajevo. It was the last connection that those in Sarajevo had to the outside world and it was a huge act of defiance against the Serbian forces who were never able to discover it.

As the tunnel passes under the runaway of the airport that is still currently in use, only a small section of the tunnel is accessible to visitors. But it was an incredible experience to walk in the shoes of those that fought this war. It’s hard to believe that the tunnel was dug out mostly by civilians who were often too old to be actually fighting the war.

I’ve talked before about how much backpackers seem to love dilipated buildings that you need to break into and that are covered in graffiti. So it shouldn’t be surprising that we were all very excited about visiting the old abandoned bobsled track located on the mountains above Sarajevo. It was built for the 1984 Winter Olympics but later became an important post for the Serbian forces who were able to use the design of the track for protection.

The track still bears the wounds of the war, we found plenty of bullet holes throughout.

This was the last stop of the Siege tour and a super creepy place to visit. The Cemetery was one of the most important artillery positions for the Serbian forces surrounding the city. It was also the scene of many of the flash points of the Siege.

Hence most of the gravestones in the cemetery show the signs of war. They are riddled with bullet holes or large chunks of them are missing because of bombing.  It’s a pretty surreal place to visit.

The Siege tour was definitely the highlight of my time in Sarajevo and I’d absolutely recommend it as a way to learn more about the Bosnian War and Sarajevo’s place in it.

I couldn’t write a post about Sarajevo without mentioning this place. There isn’t much of a partying scene in Sarajevo which was actually a warm welcome after my time in Belgrade. But the exception is Monday nights at Kino Bosna, an old theatre that comes alive with locals and live music for one day of the week. It is worth checking out!

There are bus connections between Sarajevo and Belgrade but you’ll save a lot of time, and perhaps even money by getting a door to door shuttle. All of the hostels in Sarajevo or Belgrade will be able to book them for you and you pay the driver €25 in the equivalent of Bosnia or Serbian currency. We went to catch the easy bus between Sarajevo and Mostar but the one we wanted to catch was fully booked out. Instead of waiting for an extra hour we joined with a couple of Catalans and accepted a taxi ride for the exact same price. We even got to stop on the way to take pictures of the beautiful view. We stayed at Franz Ferdinand Hostel which I would absolutely recommend.