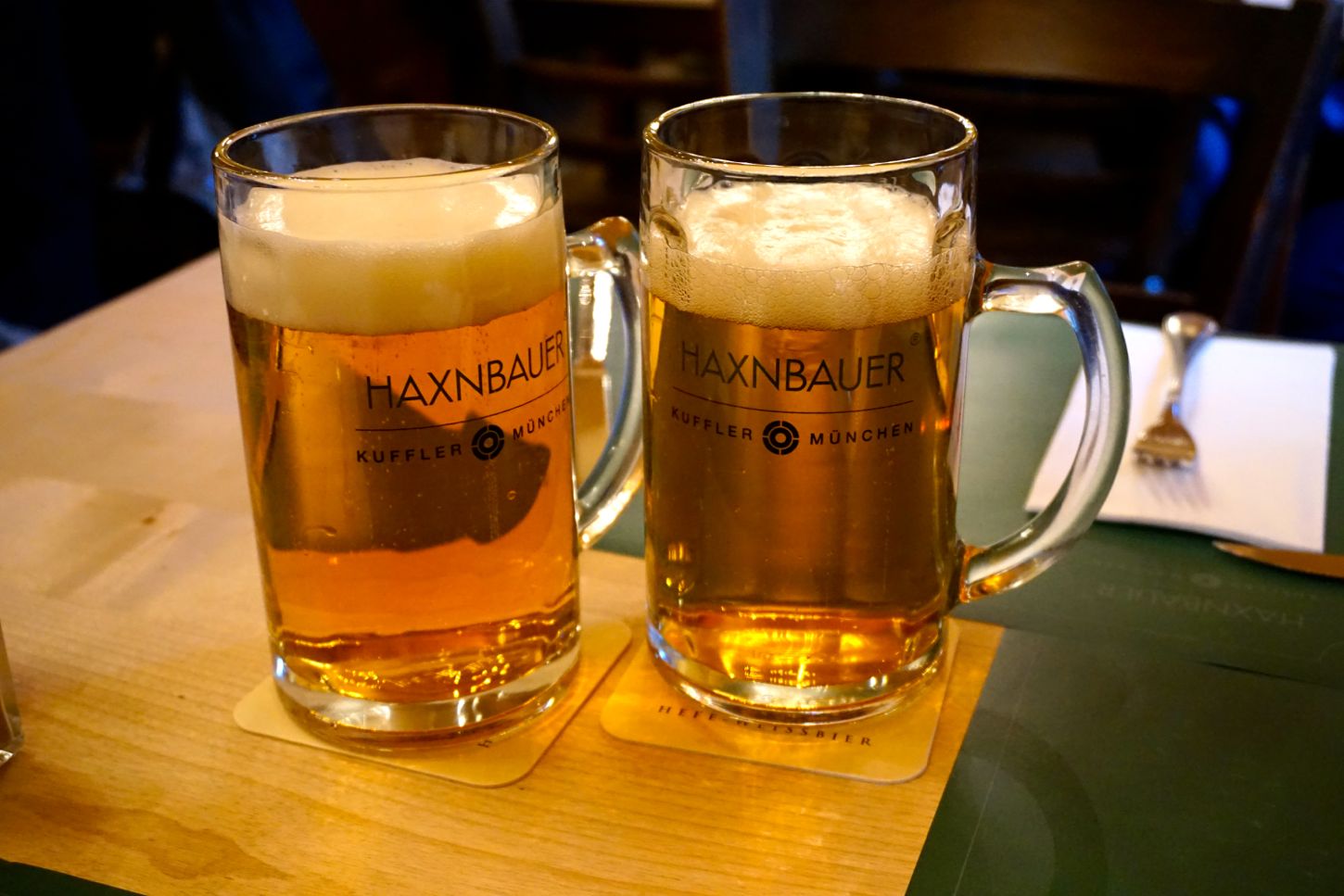 I’ve got to admit that the only real thing I knew about German food before visiting Germany in December was that they drank a lot of beer and ate lots of sausages. Oh and of course pretzels! Whilst there are definitely places you can visit in Melbourne that specialise in German food, I hadn’t been to any of them. Thus I did do a little research on what to eat in Germany before arriving in the country.

My first experiences with this country’s cuisine, most especially Bavaria cuisine was when I actually arrived in the country.

Whilst German cuisine may pale in popularity beside other European rivals like Italian, French or Spanish food, there are lots of dishes that you definitely need to add to your list before you visit this country.

However be prepared to detox on green smoothies or huge plates of vegetables, as the copious amounts of meat and beer can get to you in the end.

What to Eat in Germany- Main Dishes

You can’t leave Germany without trying their most famous sausage; Bratwurst. If you are traveling on a budget Bratwurst also makes a super cheap lunch, dinner or snack. You’ll pick one up in crunchy bread with mustard for around 2-3 euros.

I loved this dish and there wasn’t really a day when I didn’t find myself eating it in some form. For me the highlight of the dish isn’t even the sausage itself; German mustard is to die for especially when you go to an authentic sausage kitchen that makes their own. Basically in my case, the sausage was just a means of eating copious amounts of the mustard.

You’ll find these everywhere but my favourites were definitely from the old sausage kitchen by the stone bridge in Regensburg, and from the local market in Wurzburg (just look for the booth with the long line).

Keeping with the theme of sausages, currywurst is another popular German snack or ‘fast food’. It consists of sausage that is steamed and then fried. But the reason for the name ‘currywurst’ is the curry ketchup, a mixture of curry powder and tomato ketchup (sauce as we call it in Australia) which is slathered over the sausage.

This dish is almost always served with French fries or pommes which I always topped with a combination of mayonnaise and tomato ketchup. Despite being considered a ‘fast food’ I found currywurst in all sorts of places, from Christmas market stalls to high end cafes.

Of course you wouldn’t be in Bavaria if you didn’t wash it down with beer.

Pretzels are hands down the best part of German cuisine. Well, only if you don’t count the beer. If you have been living on another planet and don’t know what a pretzel is- it’s basically a type of buttery bread that is twisted into a particular ‘pretzel’ shape.

Instead of starting a meal with bread, in most of the beer houses or traditional German eateries you start your meal with a pretzel. They are a phenomenal beer/drinking snack too.

Pretzels are super cheap; you can usually pick up around 3 for 1.5 Euros at any of the train stations or from small bakeries. If I knew I was going to have a busy day and wouldn’t have time to stop for lunch I would often grab a couple in the morning to snack on throughout the day. But they are best when eaten fresh and hot and usually you can ask for the ones that have just come out of the pretzel oven.

Apparently this is a dish you usually can only get in November/December at the Christmas markets. I’m going to be super disappointed when I get to Berlin in the summer and can’t eat this dish every day like I was doing in Germany in December.

It’s basically freshly baked bread with various toppings, the most common being some type of crème fraiche/cream cheese goodness with bacon and spring onions. But there are ones with pizza toppings, salmon toppings, mozzarella and tomato etc.

For something so simple it was so delicious and one of my favourite things to eat in Germany.

You haven’t been to Germany if you haven’t got meat sweats from a pork knuckle. The Pork Knuckle is a quintessential Bavarian dish that you’ll find in every beer house in Germany. It’s best if you can split one with someone or go somewhere where they offer a half pork knuckle size.

Some places are better than others but if you get a quality pork knuckle except crispy crackling on the outside and perfectly cooked, melt in your mouth meat on the inside. The best one I had by far was at Haxenbauer in Munich.

Stewed cabbage is a staple side dish in Germany and along with potatoes, it’s the only vegetables you should expect to find at a traditional German restaurant.

Apparently Sauerkraut is made by finely chopping the cabbage and then fermenting it, but all I really know is that it’s delicious especially when served warm with a pork knuckle. In the warmer months, I can only guess that the cold version would be great.

Frites or French fries are another heart attack enducing German side dish. As mentioned above you’ll find them with currywurst or even on their own from a local street vendor or at a Christmas market. You can choose your sauce, with mayonnaise clearly being the most popular topping. For me, the combination of ketchup and mayonnaise is perfection.

This is a dish you’ll only find in the small town of Bamberg. It’s an onion stuffed with pork mince. To be perfectly honest it wasn’t my favourite dish, I thought it was a little on the dry side and I needed more of the smoked beer gravy that they served it with.

I had Schwweinsbraten when I was in Vienna but didn’t manage to try it while in Germany. There is a huge crossover between Austrian food and German food, particularly given that the south of Germany and Austria both fall into the definition of Bavaria. Thus you’ll find lots of good Bavarian food in both places.

Before coming to Europe my idea of a dumpling was something that I picked up in Chinatown or at my local Chinese dumpling place. But dumplings in Germany have a whole different meaning, they are often boiled and fried clumps of mashed potato or bread crumbs.

Whilst my description doesn’t do them many favours they are delicious particularly when combined with some type of gravy or sauce.

I mentioned this type of Bavarian meat-loaf that looks like spam in my Vienna food post. You’ll find a similar version of the dish in places like Munich but I didn’t find it as good as its Austrian counterpart. In Munich I only really found it to be made the plain way and not with the chilli and cheese and other fillings that made the one in Austria so good.

What to Eat in Germany- Sweet Things

You’ve probably eaten this cake outside of Germany but the German version is slightly different. It’s a lot less sweet than the blackforest cake we serve up in Australia. Personally I’m not a huge fan of cake so I didn’t really enjoy eating this, but if cake is your thing you need to drop into any one of the German coffee houses or bakeries to taste this cake.

This is a treat you’ll only find at the Christmas Markets in November and December. The chocolate covered bananas and strawberries were my favourite, although they have all sorts of fruit from pineapples and grapes to dates. I ate way too many of these whilst in Germany.

What to Eat in Germany- What to Drink!

In Bavaria and particularly Munich beer isn’t really considered alcohol. Sure it’s got alcohol in it but it’s viewed more as liquid food. This means that it is perfectly acceptable to find locals sipping beer with their breakfast. In fact most of the beer houses open at around 8am.

I wasn’t a huge beer lover until I got to Germany. So when you are ordering your pork knuckle or bratwurst do as the locals do and order a huge glass of beer to accompany it. My favourite was Augustiner.

Gluhwein is mulled wine and again it’s only something that is available during the holiday season. It’s usually of the red variety, although I also had a really good white version at the medieval Christmas Market in Munich. They basically just boil some wine with some amazing Christmasy spices and it’s basically heaven after a cold day (or more like morning) exploring.

So this isn’t German food but I found myself drinking a lot of green smoothies while I was in Germany. I just needed to counteract all the meat and beer so I often found myself stopping at a smoothie place to grab my vegetable fix in a shake. My favourite places to go for smoothies were Super Danke and …..

Whilst German food will never be my favourite cuisine, I was surprised at just how much I enjoyed sampling the traditional German dishes.

You’ll surely need a vegetable detox afterwards, and maybe some alcohol free days (actually pretty easy when you find yourself having to go back to shitty beer that isn’t German), but it is totally worth it!

PIN MY POST ON WHAT TO EAT IN GERMANY!