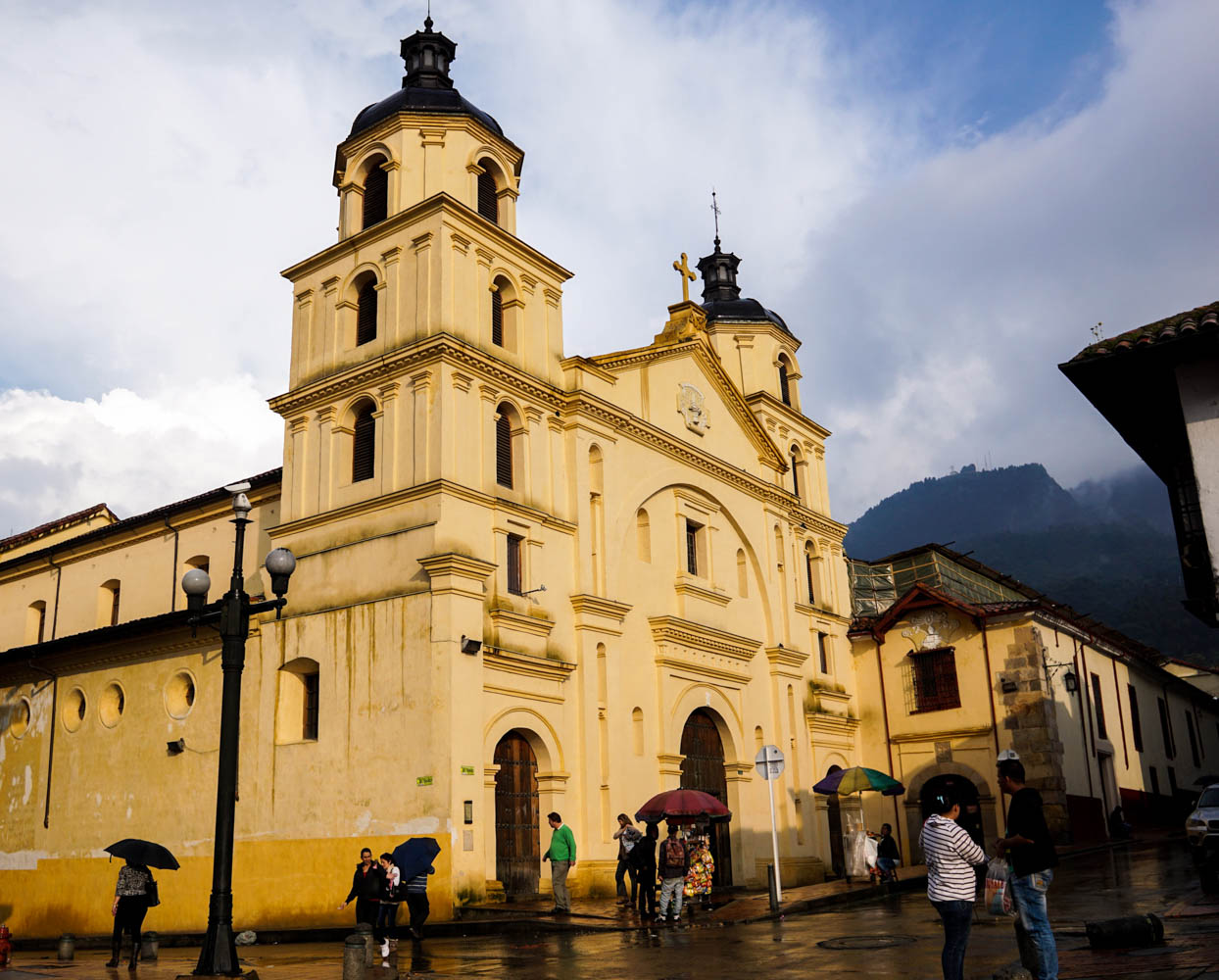 Colombia is a very special country. Almost everybody I know that has travelled to Colombia labels it their favourite country. I’m not an exception to that rule. During the short 2.5 weeks, I spent in the country I fell head over heels in love with the culture, the people and the sights of Colombia. My first piece of advice for Colombia is to try not to allocate any less than one month to visiting the country.

The short period of time I spent here was not enough time! I’m planning a 6-8 month trip from Mexico City to Colombia when I graduate and I’ve already promised myself that I’m going to spend at least 6 weeks next time I visit!

Bogota was my first stop in the country and is for a lot of people. The general rule is that people flying into the country begin in Bogota, while those sailing in from Panama begin in Cartagena.

Despite the universal love for Colombia by backpackers, Bogota gets a lot of heat. It’s often people’s least favourite destination in Colombia and many would recommend skipping it. Whilst it doesn’t have the ‘best place in the world’ vibe of Medellin (look for an upcoming post on that one), I still think it is worth a visit.

There is more than enough to keep you occupied for 2-3 days in Bogota. I spent some time acclimatising to the altitude upon arrival so I was moving a little slow in terms of the days I spent in Bogota. I might have been able to squeeze more in, or shorten my trip and still see the same things. But the lack of oxygen, and the notorious afternoon downpours in rainy season meant that I paced myself during my time in the city.

Beyond Colombia Free Walking Tour– 10am or 2pm daily

I can say I gave a very generous tip at the end of the Beyond Colombia tour as it was good. Our guide braved the bad weather with us and took us right around the cultural centre of Bogota, known as La Candeleria. He provided us with lots of interesting background history on Colombia and the city of Bogota. Other than the exploits of Pablo Escobar, and the fact that less than a decade again Colombia was one of the most dangerous countries on earth, I didn’t know a lot about the history of Colombia when arriving there. The walking tour of Bogota really helped to fill some of those gaps and gave me a more accurate picture on life in Colombia- both now and before.

The highlight of the walking tour for me was wandering along Callejon del Embudo, an alleyway that is covered in some of the most beautiful graffiti that I have ever seen. It’s also where we stopped at a famous café to try the infamous, Chicha. Chicha is an alcoholic drink made from fermented corn. It’s cheap but notorious for giving you a terrible hangover given the high level of sugar in the drink. It’s also got an interesting cultural history where it used to be illegal and people used to drink it anyway along these streets of Bogota.

The tour will also take you to the most famous place in Bogota- Plaza de Bolivar, where you can grab a photo in front of the equally famous Catedral with yourself and a million pigeons.

Ajiaco is a must-eat dish while in Bogota. It’s a potato and chicken stew that is topped with a whole cob of corn and usually comes served with delicious additions like half an avocado, capers, yoghurt and coriander. One of the best places to try it in Bogota is at La Puerta Falsa, right near Plaza de Bolivar. I found it to be a hearty lunch, especially given the relatively low temperature of Bogota.

I’m still kicking myself that I never got to visit the famous mountain overlooking Bogota. Unfortunately, the three days I spent in Bogota were cloudy and rainy, and I was holding out to visit during my last day in Colombia when I would return to the city. Alas, the weather remained the same even two weeks later. Given the cloud, I wouldn’t have been able to see anything from Monserrate. So I never made it up there.

But if you are lucky enough to visit when there is some sun around this would make the perfect afternoon activity. You could get the cable car up there, snap some great photos at golden hour and then wait out the sunset. Going in the afternoon means you get to experience what is meant to be an incredible view both during the day and at night.

Bogota is known for its great nightlife and it is something that I definitely got to experience. Where you decide to party will likely depend on the time of the week you are visiting the city. A trip to Andres Carne de Res is something that you can’t miss if you are passing through on a Saturday night. Most hostels will organise a party bus to this huge and unique club just outside of Bogota.  Fridays are a good day to head to Baum, supposedly one of the best electronic clubs in South America. I’m still terribly sad that I didn’t make it there. But, if like me you find yourself visiting on a Tuesday then you’ll get to experience Gringo Tuesdays at La Villa. It’s a great mix of westerners and Colombians and more than one of my male hostel friends ended up going home with a local. It’s not located in La Candeleria but my hostel (The Cranky Croc) organised a party bus to/from the club. I had a great night there!

If, unlike me, you can crawl out of bed post a big night of partying then you should head out on the Graffiti Tour of Bogota. This tour, leaving at 10am and 2pm everyday is so popular that you’ll need to book in advance. It’s the same as the free walking tour, you pay what you want at the end.

As I said before, Bogota is home to some of the best graffiti in the world. This is all thanks to a government initiative that allowed legal graffiti. But all designs need to be approved by some sort of committee so it means that the quality is seriously exceptional. The graffiti tour will give you a great explanation of street art in Bogota and take you to some of the most breath-taking pieces of work.

I never made it to the Gold museum during my time in Bogota but it came highly recommended by many of my friends passing through the city. As its name suggests, the Gold museum is a museum about gold. It’s home to more than 55,000 pieces of gold, many of which are pieces originating from pre-Hispanic Colombia and other parts of South America. I’m also told you’ll find lots of information on the history of gold and its role in pre-colonial and colonial Colombia. It’s on my list for my return that is for sure!

I know safety is a primary concern of travellers in Colombia but I can’t say I felt terribly threatened the whole time I was in the country. But some of my backpacking friends did have a few situations, particularly in Bogota. So, it is best to avoid public squares and parks at night time.

I flew in and out of Bogota. You’ll find cheap flights both within Colombia and from international destinations such as Quito , Lima and even Miami with local airline, Viva Colombia. But be aware of some of their money saving policies. You’ll need to check in advance and have your boarding pass printed off. Luggage is also an additional cost.

I stayed at the Cranky Croc Hostel which I thought was fantastic. Breakfast isn’t included but they have a cheap and extensive breakfast menu on offer (including vegemite on toast!). The beds are ridiculously comfortable with huge duvets to protect from the Bogota chill. The staff were always helpful and the party buses they organise on Tuesday and Saturday nights are recommended as a great way to meet people and an awesome night out.

Once you find yourself in La Candeleria, most of the sights in Bogota are easily walkable. Otherwise we got around using Uber and Uber Pool. I find it a much safer alternative to getting into a taxi which have been known to be a little unsafe in Bogota. Just be aware that Uber is illegal in Colombia and you’ll need to hop in the front seat so you just look like friends.

Comment below with your own advice or experiences from Bogota.