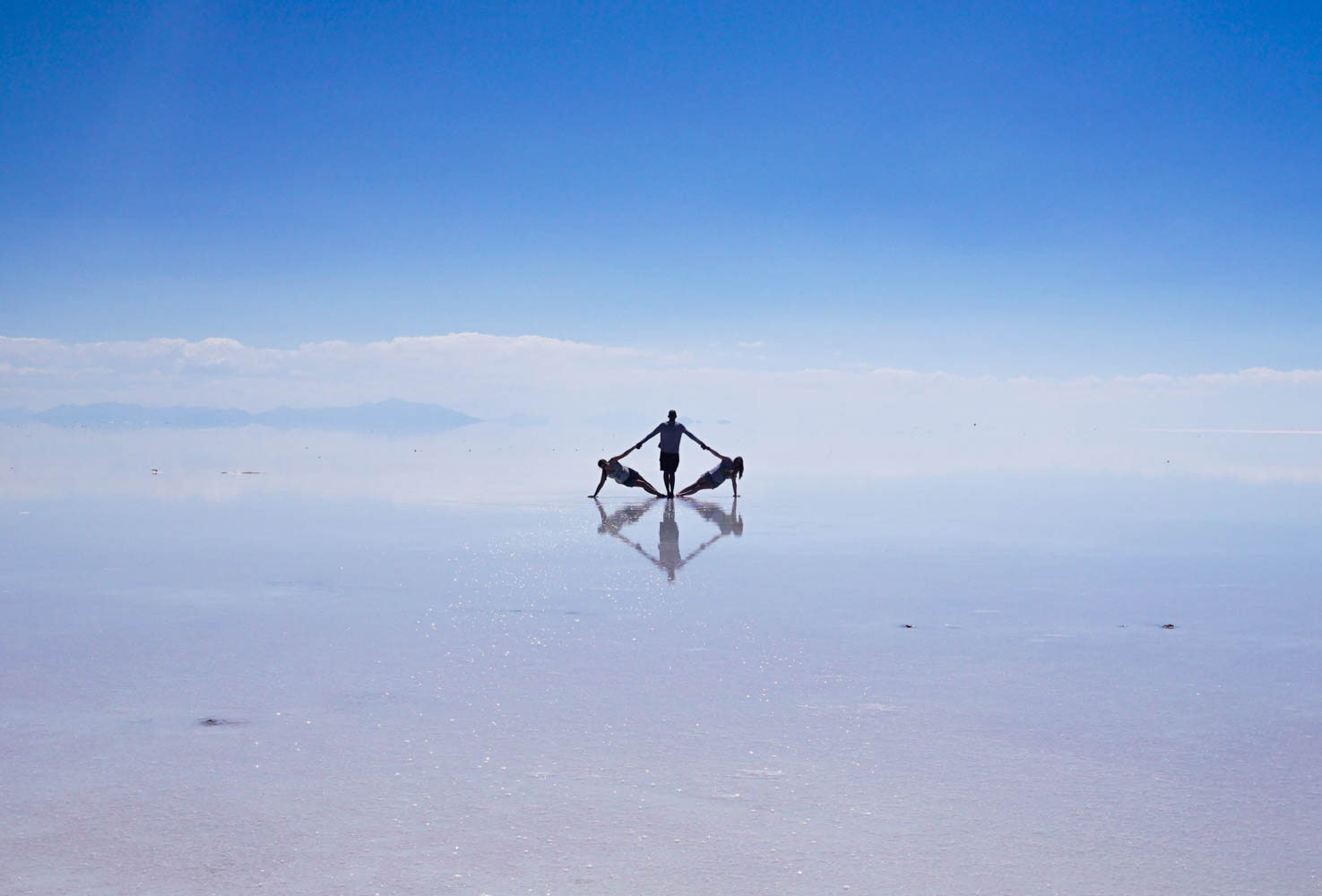 If I had to pick my top five experiences from my trip through South America, the three days I spent on the Salar de Uyuni in Bolivia would make the list every time.

After having spent much longer than expected in Peru I found myself with very little time to explore Bolivia. Upon assessment of the rainy season conditions, and a reflection on my own weakness with altitude sickness that made doing things like hiking through Potosi extremely difficult, I decided to spend just a week in the country.

I had an awesome few days in the capital of La Paz, partying at the Wild Rover and taking the cable car across the mountaintop city in search of some incredible scenery. But the real highlight of my time in Bolivia were the three days I spent crossing the Salar de Uyuni and the Bolivian Salt Flats with Red Planet Expeditions.

I thought a three-day Salt Flat tours meant three days of exploring the actual salt fields of Bolivia. But rather it is three days of crossing an ever-changing landscape of rainbow coloured mountains, snow covered hot springs, desert plains and boulders, volcanic geysers and green plains full of llamas. I ended my trip with hundreds of amazing photos and even more incredible memories.

Day 1- The Railway and the Salt Flats

We arrived on an overnight bus from La Paz. Thanks to Valium that my friend Sarah had procured in Colombia I ended up sleeping the whole way. The only problem was that our bus arrived before 4am, two hours ahead of schedule. We found ourselves in a virtually deserted town early in the morning still very much feeling the effects of the Valium.

A driver from Red Planet picked us up and dropped us at a 24/7 tea house to kill some time before the office opened. Sarah and I proceeded to lie down on the floor near our table and sleep for another two hours while our friends Alok and Hemel generously watched over our stuff and us.

It wasn’t long before we found ourselves checking in with Red Planet for our three-day tour across the Salar de Uyuni. The jeeps that do this trip can accommodate up to seven passengers, although it would be a tight squeeze. We were lucky enough to have only five of us plus the driver. It was the four of us that had come from La Paz and a random German guy Marcus who we became fast friends with. Given the tight confines I can imagine I would have had a much different experience on the tour if I wasn’t with such an awesome group of people.

After checking in we went shopping for some much-needed essentials for the journey; enough water for three days, toilet paper, snacks and of course wine.

It wasn’t long before we were loading our bags on the top of the 4×4 and heading out to the first stop of the tour- the old abandoned railway. This stop is purely for photo purposes, with the old railways and tracks providing plenty of opportunities for instagrammable snaps. We had lots of fun climbing up on the old carriages and posing on the tracks.

The rest of the day was spent exploring perhaps the most famous landscape of Bolivia; the Salt Flats. The shiny endless white of the salt plain means that sunglasses are an essential item for any trip to the flats. I took my sunglasses off for a moment and was almost blinded by the sun glaring off the white salt.

The benefit of travelling Bolivia during rainy season was that when the rain falls, the salt flats become the world’s largest natural mirror. It made for some awesome photo opportunities as we took some great reflection photos and got creative with poses and snaps.

Of course, the other photos that everyone takes on the salt flats are perspective photos. The salt landscape means that objects can appear further or closer if you angle your camera and position yourself in the right way. Sarah and I had been collecting objects for weeks in preparation for taking some interesting perspective photos. Our guide was of course a pro at setting them up and we managed to take some great snaps.

After the Salt Flats we travelled back through town and further afield before arriving at our guesthouse for the night. We were joined with three other jeeps full of Red Planet passengers who we ended up getting to know better over a delicious dinner.

The second day of our adventure was my favourite day of the whole trip, mostly because of the completely different sites and landscapes we got to explore on our drive across the Salar de Uyuni.

We started the day with a plain of green grass, small watering holes and lots of llamas.

But it wasn’t too long of a drive before the landscape changed rapidly and we found ourselves in a desert landscape, climbing over huge boulders and exploring a serious of rock formations.

Despite the sheer exhaustion of the day, I felt guilty every time I wandered off to sleep because I’d wake up to another beautiful landscape. One of my favourite stops of the day was our lunch stop in front of a huge rainbow coloured mountain that was reflected in the lake located at its feet. One of the guys on our tour promptly decided it was the perfect spot for a marriage proposal which added some more excitement to the day!

Whilst Red Planet Expeditions might be more expensive than some of the other tour options- there were more than a few things that made the extra expense worth it. The first was that the jeeps were never overcrowded, the second was the English guide and driver, and the third reason was that the food was great. We were expecting packed sandwiches for our lunchtime stop. But instead we were pleasantly surprised to have a hot meal of rice, chicken, vegetables and even dessert of chocolate and skittles.

There weren’t exactly tables on which to eat our lunch, but who needs tables when you have the ground and an incredible view?

Other stops of the day included the flamingo lake, the famous rock formation that is a quintessential photo of this desert, and a huge volcanic geyser that was spurting smelly sulphuric gas. The geyser also represented the highest point on earth I have yet to reach, at over 5000m above sea level!

By the time, we arrived at our guesthouse for the night we were well and truly exhausted. Another reason we had booked Red Planet Expeditions was because they spend a night beside the hot springs which meant we could explore them for as long as we wanted, rather than rushing through them in the morning.

Despite this we might have bailed on the hot springs altogether because of how tired we were. But we had an engagement to celebrate so we promptly pulled out the wine we had bought with us and headed out into the freezing cold night in the direction of the hot springs. Despite the cold the springs themselves were super warm and we spent more than a couple of hours turning into prunes in the water.

The heat was a huge contrast to the snow-covered jeeps we found outside of our accommodation the next morning.

There were a few stops in the morning that were mostly opportunities to take more photos in front of snow covered mountains. I don’t think I could ever get sick of this amazing landscape- it was just breathtaking.

The Salar de Uyuni ends at the Bolivian-Chile border, so you have the option of being dropped off at the border and transferred to the Chilean border town of San Pedro de Atacama. It seemed that most people, including us, chose this option as we had a rather long wait at the border which was incredibly freezing. We had an even longer wait for our bus to turn up. I am not great with being cold and I think I frustrated everyone with my constant complaining and asking, ‘when is that bloody bus going to arrive?’.

If you aren’t going on to Chile, the tour will spend the rest of the day driving you all the way back to Uyuni, the exact same way you came.

Some of my best memories and greatest photos from the almost four months I spent in South America are from the short three days I spent on the Salar de Uyuni. It’s an unmissable experience especially given how cheap it is compared to other bucket list South American activities like the Amazon or the Galapagos.