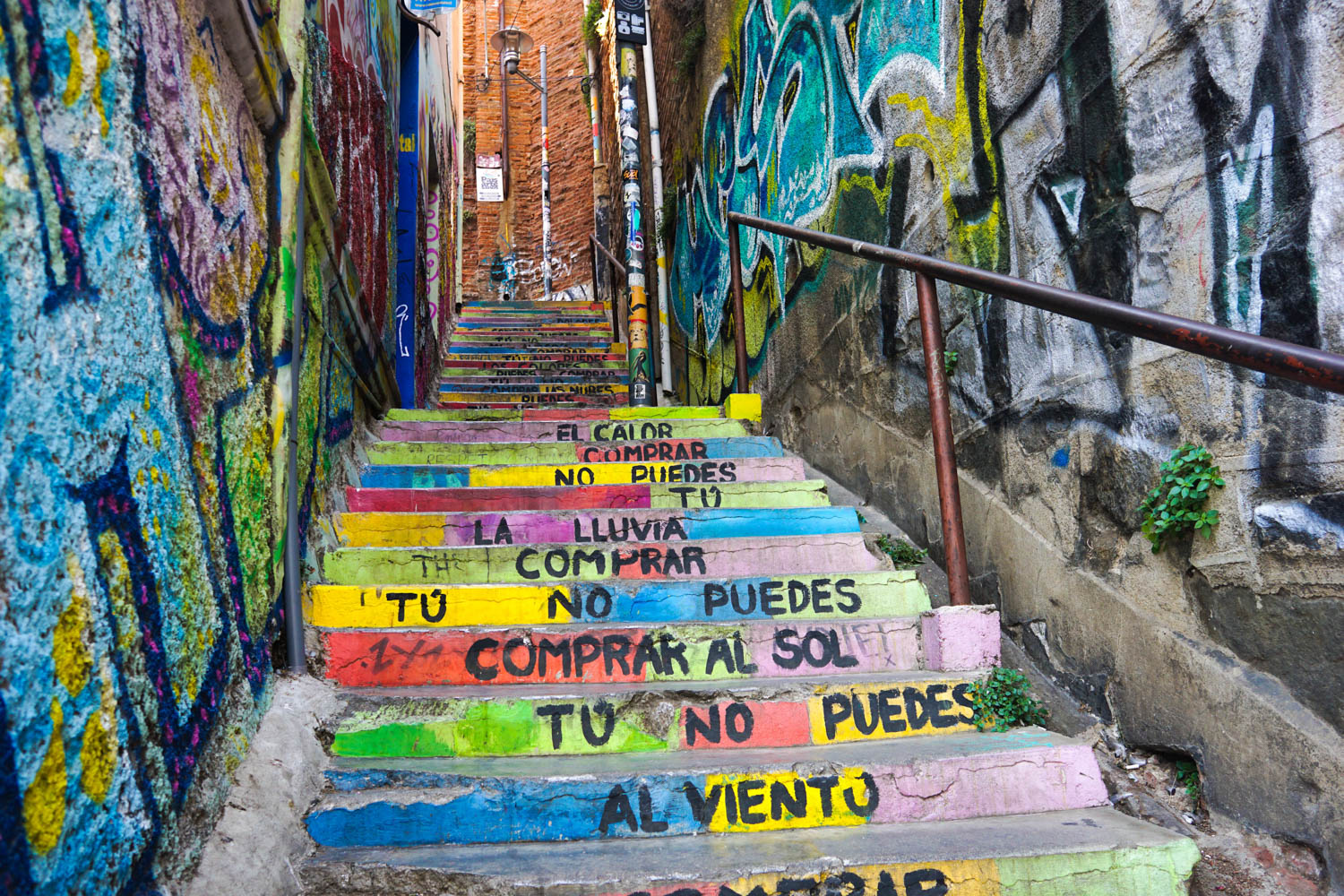 The seaside city of Valparaiso was my favourite spot in Chile, and the only place in the country that I feel like I can really write about.

We spent three days exploring the city which is only a short bus ride from the capital of Santiago de Chile. We sampled lots of great Chilean wine, we went gay clubbing with a bunch of locals who we met on the rooftop of our hostel and we spent hours wandering the streets and stopping to take photos of the insanely amazing street art.

Many head to Chile to experience the wild landscapes of Patagonia, the plains of the Atacama Desert, or the wonders of the statues on Easter Island. I didn’t sample any of these parts of Chile, and it’s the reason why I am going to be heading back one day. Lucky there are direct flights between Melbourne and Santiago!

But the country’s cities such as Valparaiso offer a great glimpse of culture, colour and history that you wouldn’t necessarily get from a purely nature driven trip to the country.

So here are a few reasons why you need to add Valparaiso to your South American itinerary!!

This was the major reason that I decided to head to Chile. Whilst the classic Gringo backpacking trail remains relatively similar from Colombia through to Bolivia, it tends to split off after the Salar de Uyuni. Half of the backpackers’ head to Buenos Aires via Salta whilst the other half head down into Chile and across to Buenos Aires through Mendoza. It was a difficult decision to make but the photos of Valparaiso’s street art were what finally won me over. It was also the reason I could convince Sarah, who had been travelling with me since Ecuador, to continue with me rather than head straight to Buenos Aires.

Both of us were obsessed with street art and both of us agreed that Valparaiso was home to some incredible pieces of art work. You’ll find amazing work scattered all over the city but a few streets are particularly famous for their art. Valparaiso is a series of hills but after a month of trying to hike at high altitude, climbing the streets of Valparaiso seemed like a piece of cake.

If you don’t want to take my word for it, here is a small fraction of the art you’ll find on Valparaiso’s street.

I found the Chilean people to be some of the friendliest people we met in South America. This became more evident on our second night in the city when we made friends with some locals, and domestic travellers who were drinking on the rooftop of our hostel. Like much of South America when you become fast friends with the locals, all your alcohol becomes communal. So, it wasn’t long before we were sharing beers, wine and even wine drunk out of a melon (apparently, a Chilean special during the summer).

They promptly invited us to their friend’s apartment where we drank some more beers before heading out to a gay club where we danced the night away. It was a crazy and random night, as all my favourite nights out in South America were.

The street art is only a small fraction of the colours that make up Valparaiso. Valparaiso looks much how I pictured Rio in Brazil, with favela type buildings stacked up on top of each other from the valley right up to the top of the hill. Every building seems to be painted a different colour which makes for some great photo opportunities, especially when you find yourself on one of the high points of the city.

One night we even found ourselves in a taxi driving up to the favelas. I’m not going to elaborate but we were very happy to have escaped that situation without being robbed!

There used to be 31 operational elevators in Valparaiso that operated as a kind of transport network to get the people, especially the weak and frail, up the city’s hills. Now only 15 survive and these old, almost rusty, machines make a great tourist attraction. At less than 50c a ride, they are one of the cheapest dates in the city. As a bonus if you are as lazy and unfit as me, you don’t have to walk up the hills.

We rode just one of these elevators during our time in the city. It was a great experience but not one that I wanted to repeat. The word ‘old’ didn’t just describe the age of the elevator but the technology also. It didn’t feel like the safest moving vehicle that I have ever been on. But then again, hundreds of people use the elevators every day without incident. Regardless, all three of us agreed that we would much rather walk back down then hop back on the elevator.

We arrived at one of the most beautiful high points of the city where we could snap some awesome photos. I loved the juxtaposition of the modern port below with the old favela buildings and the smattering of Valparaiso’s famous street art. I feel like my photos from this point really sum up what the city is all about.

5. It’s not as expensive as we thought

Chile is considered one of the most wealthy and affluent countries in South America so we were expecting it to be very expensive and eat into our budgets. However, we found that we didn’t send much more money in Chile than we did in countries like Peru. Most hostels we stayed at in Peru had restaurants and bars attached to them so we ended up spending quite a bit on food and especially on alcohol.

In contrast, the hostel we stayed at in Valparaiso had a kitchen and allowed you to bring your own alcohol in. Given how abundant good and cheap Chilean wine is, this really cut down our drinking expenses. We also cooked our dinner every night we were in Valparaiso which reduced our food expenses.

One of the things I miss most while travelling is sushi. In Melbourne, sushi rolls are one of the cheapest lunches you can get. This means I eat it at least twice a week when I’m back home, particularly on university days. In every other part of the world, sushi ends up being an expensive meal.

Chile was one of the exceptions, where we could get sushi meals for a relatively good price. This meant we ate sushi at least five times in the week we spent in Chile, including a couple of times in Valparaiso. It satisfied my sushi cravings at least for a little while!

Empanadas are pastries filled with a variety of fillings. They are one of the most famous street food snacks and you’ll find them all over Central and South America. But the ones in Chile, specifically in Valparaiso, at a small store across from our hostel, were by far the best of the lot.

Where Should I Stay in Valparaiso?

If you are a budget traveller or are just looking to make some friends, I’d always recommend booking a hostel. We stayed at Hostal Po and had a great time- it was quirky, cheap, full of cool people and we could bring our own wine in and cook our own food in the kitchen.


Valparaiso is a side of Chile that you won’t experience anywhere else and a great stop on the way to other Chilean adventures in Santiago, Varna, Patagonia and Easter Island.