Venice- A Tourist Trap Worth Getting Caught In 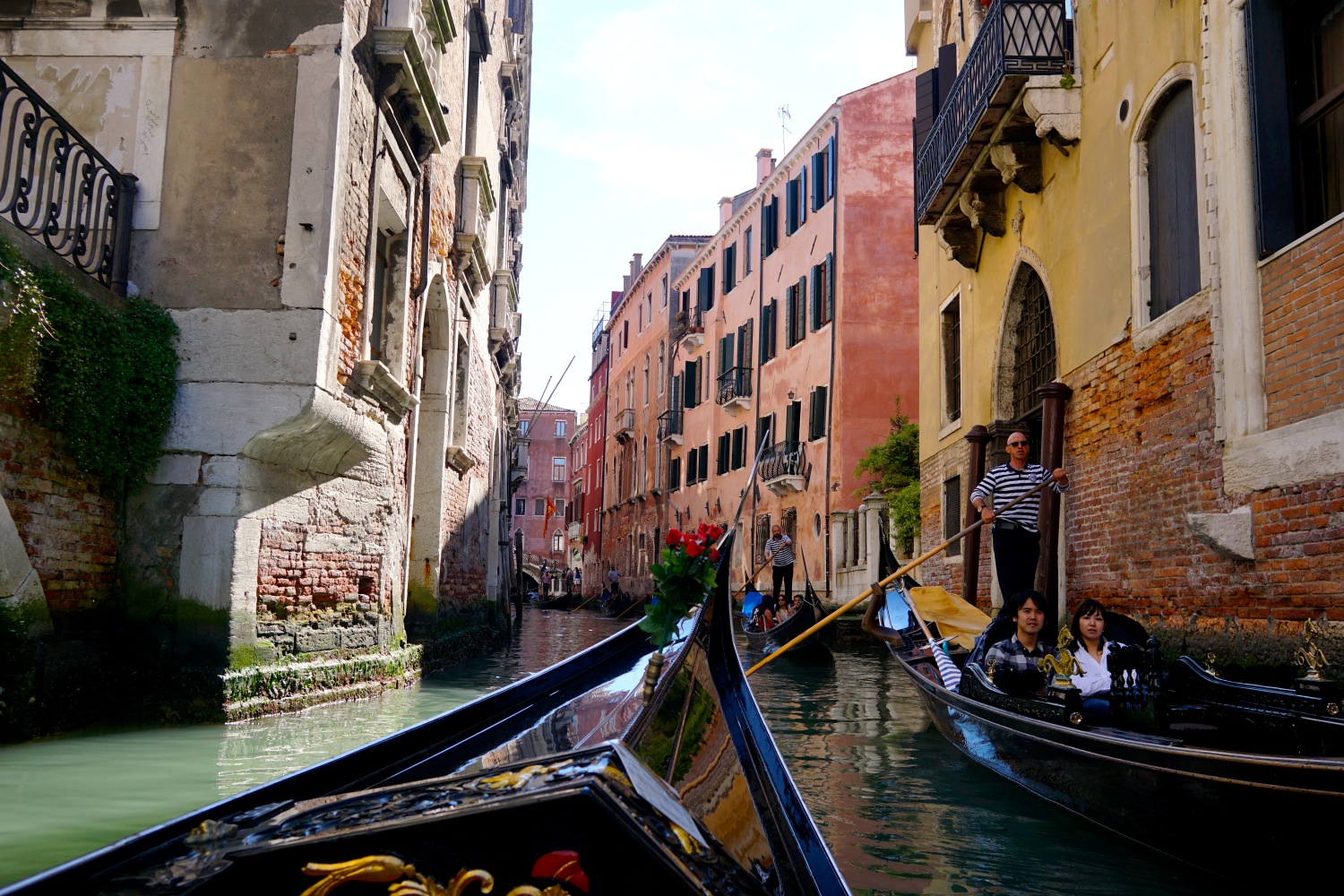 I didn’t expect to like Venice at all. I kept imagining streets packed full of tourists, expensive food and hotels, and overrated sites. I couldn’t have been more wrong.

Yes Venice is expensive, yes it is overcrowded with tourists (especially on weekends which is when I was visiting), but god is it beautiful. The sheer beauty and the overwhelming history of Venice make the expense and crowds worth overcoming.

When you have been travelling in Europe for a while, visiting old towns can become monotonous. A particularly spectacular old town might jump out at you now and then but you need to be careful the others don’t just all mesh into one haze of European history.

It’s what I started to feel when it came to Tuscan old towns and one of the reasons I didn’t make it to Siena in the last couple of days of my visit.

But the risk of monotony doesn’t exist when it comes to Venice- it is the most unique city I’ve ever visited. I can guarantee you won’t see anything like it in all of Europe.

Is Venice Really a Solo-Travel Destination?

I visited Venice with my mother and her partner. I was the third wheel in the gondola ride with them, we shared a hotel room to save money and they didn’t even get an opportunity for a romantic dinner without me being there. I was joking all weekend about ruining their romantic weekend away but it wasn’t something that bothered any of us (at least I don’t think so).

The Canals of Venice

The first glimpse of Venice we had was from outside of the main train station. From that very moment it was clear Venice was different. Instead of waiting for a bus or a taxi to their hotel, swarms of people were buying tickets for the public water taxi.

The canals of Venice serve as the roads of the city. You won’t find any cars in Venice- just canal boats and gondoliers. The Grand Canal is essentially the highway of Venice and that’s where you’ll find the Valparetto- the main water taxi around the city.

But tickets on the boat are extremely expensive- €8 for what was going to be a five minute ride. It was only a half hour walk to our hotel from the train station, following the footpath and little canal bridges that make Venice navigable by foot.

The beautiful canal systems aren’t something you have to seek out on a trip to Venice. You’ll see them everyday just exploring and walking through the city; you’ll pass over them, walk along them, cross them and maybe even take a ride on them.

We even had a canal right out the window of our hotel which was lovely! But bear in mind that any hotel room with a canal view is going to be noisy as the canals are Venice’s roads and early morning deliveries start at around 4am.

You might think that the canals will blur into one but all of them have some different aspect; whether it’s the colourful buildings along them, a pretty bridge or a pretty church in the distance. And they are all so picturesque!

The heart of the city of Venice is St Mark’s Square. Here you are sure to find overpriced restaurants (you can seriously pay €8 for a coke!). It’s best to wander outside of the square when actually purchasing anything. But it is always buzzing with people and it’s nice to just soak up the atmosphere of the square, especially at night when the restaurants have bands playing outside of them.

But other than the atmosphere it is also really stunning due to St Mark’s Basilica. The outside of this cathedral is incredibly beautiful- and that’s coming from a girl who is seriously sick of visiting cathedrals after seven months in Europe. But the lines to go inside are huge and I can’t say I found the wait worth it.

My favourite thing to do in the square was to take the lift up St Mark’s Campanile which is the bell tower next to the Basilica. From here you get a stunning view of the city and of the square!

Unfortunately I wasn’t able to see the Rialto Bridge in all of its glory as it was under scaffolding and being restored during my visit. But as this is one of the only connections across the Grand Canal it is not a bridge you can avoid.

I actually really began to curse the bridge as it was stepper than a lot of the other canal crossings and you always had to wade through hundreds of other people in order to cross it. I’m sure I would have appreciated it more if I could have actually seen how beautiful it is meant to be without the scaffolding.

But one of the main reasons to cross the bridge is to get to the Rialto Market. After visiting the market I had serious envy of anyone staying in an AirBnB and hated the fact I didn’t have access to a kitchen. The amount of fresh produce, especially seafood was incredible. It really made me want to cook!

The view of the Grand Canal from the Rialto was also one of my favourite canal views of my whole time in Venice. I just loved that it wasn’t as polished, restored, fancy and put together as other parts of Venice. It felt very authentic.

The Rialto Market is also open to some cute cafes and bars that were surprisingly reasonably priced. One of those restaurants did special street food on Saturdays (when we were visiting) where you got a huge plate of frito misto (mixed fried seafood) and wine for only €10. They place a bunch of tables and chairs out in the little market square for you to eat on. We combined it with an Aperol Spritz and the atmosphere and experience was just so great.

After visiting the Rialto Market it is really worth continuing on and exploring this side of the Grand Canal. We walked for a solid hour in the direction outwards from the market and stumbled along gorgeous alleyways and a much quieter side of Venice.

Speaking of the Aperol Spritz; you can’t go to Venice without drinking it. Aperol Spritz are a combination of prosecco (or white wine), soda water and aperol (a bitter orange spirit). You can also find alternatives made with Campari which is a bit more bitter.

Whilst Venice is expensive, we found Spritz to be super cheap in Venice. Here it’s considered more of a wine and priced at accordingly at around €3-€4. In the rest of Italy and Europe its often classified as a cocktail and priced between €6-€12.

Our favourite place for Spritz was a little local bar called Cafeteria Gloria. It came recommended from one of my favourite bloggers and snapchatters- Expat Edna. It was a stellar recommendation.

Gondola rides are expensive and corny and overrated. But it wouldn’t have felt like a trip to Venice if I hadn’t hopped on one at some point. The standard price across the whole city is €80 for a half an hour ride, that feels more like fifteen minutes.

But that is for up to six people, so if you rope together more people to fill the gondola it’s less to split between you. We ended up having to split it between three of us. I sat in the front looking awkward while Mum and Pasq sat in the love seat at the back.

It was very special, although I was grumpy that the gondola rider didn’t put his cute hat back on!

Burano is an island located about half an hour from Venice. It’s considered part of the islands that make up Venice proper. It’s an easy ride there on the Vaparetto for €8 each way. We headed out nice and early in an attempt to fight the crowds.

Whilst this pretty old fisherman’s town attracts lots of visitors, many do it in afternoon after spending the morning in Murano. So by skipping Murano and just heading straight to Burano we managed to avoid most of the crowds.

What makes Burano so famous and beautiful is the houses lining its few canals that are painted in bright colours. It seems a bit like a Disneyland set rather than a real life town. It makes for some fantastic photos!

Make sure you head beyond the one main street, as we stumbled along some smaller streets that were just as pretty, but really quiet except for the handful of locals drinking their coffee out the front of restaurants

The Final Verdict on Venice!?!

Don’t’ discount Venice as a ‘touristy’ destination. I’ve said it before and I’ll say it again- just because a destination is touristy doesn’t mean that it is horrible or worth crossing off your list.

My Guide to Cuba: The Rewards and Challenges of My Favourite Country