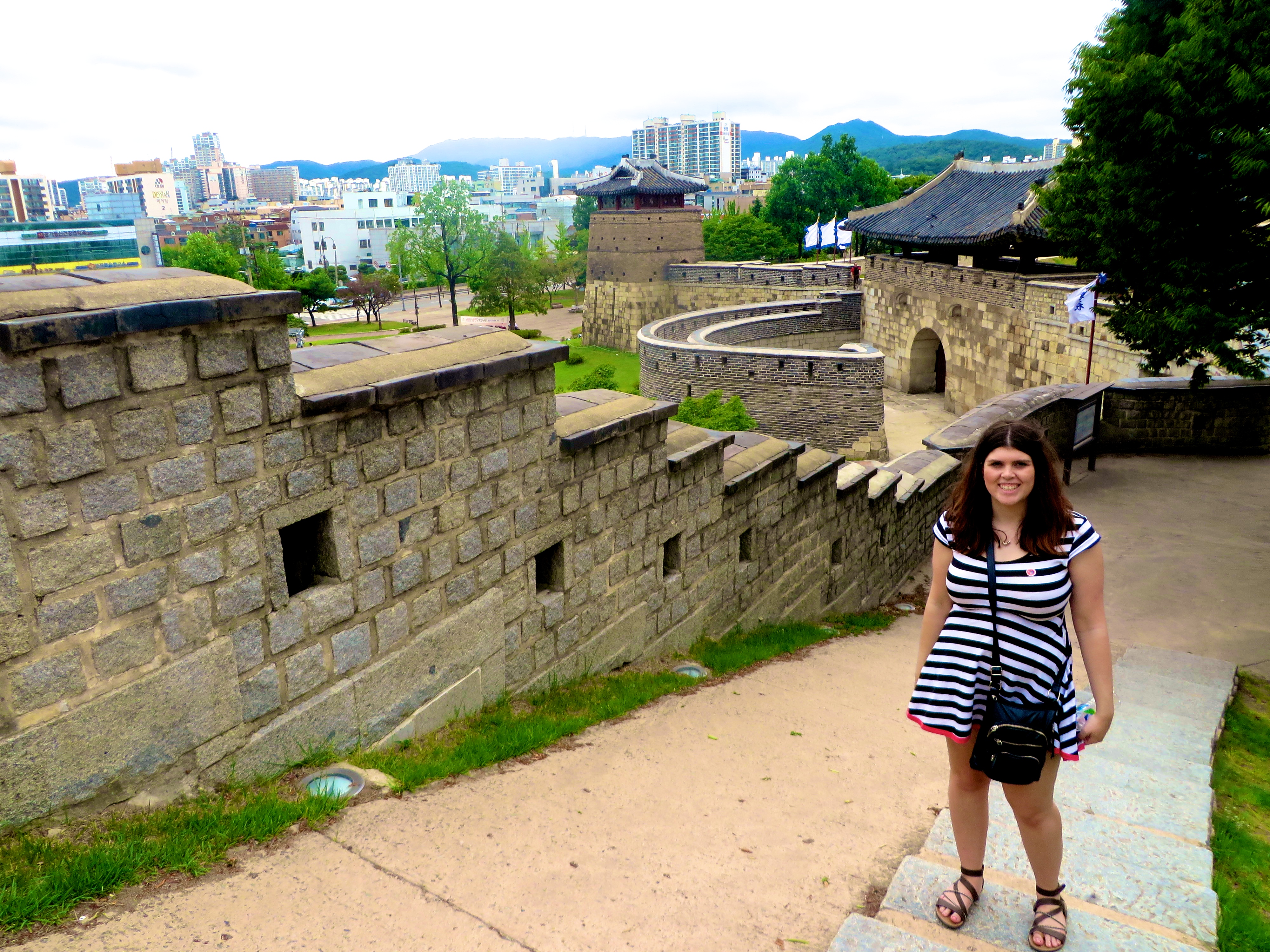 One of the first things I do when arriving in a new city (and country) is to look up the UNESCO sites in the area. I love exploring these sites and I’ve now visited 20 (with some more to come over the next few days). My obsession isn’t really surprising considering I major in history!

I often find that seeking out UNESCO sites is a great way to find unique and beautiful places. While some of these sites definitely coincide with tourist sites such as the Vatican or the Palace of Versailles you can often find some more obscure ones that aren’t especially touristy but are beautiful nonetheless.

The other benefit is that UNESCO sites can often be found in small towns or cities so they offer a chance for you to get out of the big city and take a break from all that hustle and bustle.

Hwaseong Fortress is located about an hour out of Seoul in Suwon. You only need to take the Seoul subway system in order to get here.

Upon arrival at Suwon station you’ll need to hop on a bus. This is where we got very lost. We had some trouble working out how to pay for bus tickets.

Then we had some more trouble by getting on a bus going in the wrong direction. We finally got on the right bus but got off 2 stops too early and ended up having to walk a fair bit to get to the fortress. Just getting to Hwaseong seemed to be an adventure and a half.

To avoid you facing the same problem I’ll provide some more detailed directions at the end of this post!

Well once we finally found the fortress we realised how huge it was. It circles right around the city and takes about 2-3 hours just to walk around.

The fortress was built in 1794 by a King of the Joseon dynasty in honour of his father’s murder. The Joseon dynasty still plays a huge part in Korean history and most of the UNESCO sites in and around Seoul centre around this particular royal line.

The fortress is beautiful and is definitely worth spending the time walking the whole way around it. We started at a part of the wall that had previously been destroyed by floods and then rebuilt.

There are guard towers and what used to be homes scattered around the wall in the traditional colours of the Joseon dynasty- red and green.

While we didn’t see another single tourist the whole day (MERS is taking a toll on tourism in South Korea at the moment) there are men dressed in traditional guard clothing at different points around the fortress and you can do the touristy thing of getting your picture taken with them.

This part of the wall seems to be the most photographed and served as one of the main gates to the town that used to exist between the walls of the fortress.

However the highlight of the 3 hour walk for us was definitely the climb up to the top of the fortress that sits on a large hill. Whilst I’m incredibly unfit and arrived at the top extremely exhausted I could still appreciate the view.

From here you can see over all of Suwon as well as the other parts of the fortress. It was nice to be able to point to the part of the wall we started on and realise how far we had walked!

After having spent almost a week in Seoul I can definitely say that Hwaseong fortress is worth the little trip out of town. It has been one of my favourite places of far this trip.

I particularly love the fact that it is not just something to go to, see, take a photo and then leave. The nature of the length of the wall means you can enjoy a lovely walk around the fortress and spend a couple of hours marvelling at the history and beauty of this UNESCO site.

It is meant to be even better in winter when it is covered in snow!

And of course after all of that walking we decided to reward ourselves with some traditional Korean BBQ for lunch. This is still one of the best restaurants we have eaten at so far in South Korea. The sides that come free with every Korean meal were especially amazing given the variety we were offered here.

You need to get Seoul Metro Line 1 towards Suwon station. This line splits at Guro so you’ll need to listen out to see if you need to switch trains here.

Once you arrive at Suwon station take exit 7 and you’ll see a lots of bus stops all grouped together. Don’t make the mistake we did and get on a bus here as they are pretty much all going in the opposite direction. You’ll need to cross the road and get the bus on the other side.

I would wait for bus 13 as this seemed to be the easiest one to get. You can pay using a T money card which is available at all 7/11 or similar stores and can be used on the Seoul metro line as well as buses and even taxis.

You’ll need to stay on the bus for about 10-15 minutes until you see the hill on your left side (there is a golden Buddha on it).

You can get on the fortress at any point and just start walking although you may be stopped at one stage to pay the 1000 won ($1.2 AUD) entrance fee.

Where Should I Stay in South Korea?

If you are a budget traveller or are just looking to make some friends, I always recommend staying at hostels. I stayed at Pencil Guesthouse and Hostel in Hongdae and it was superb!