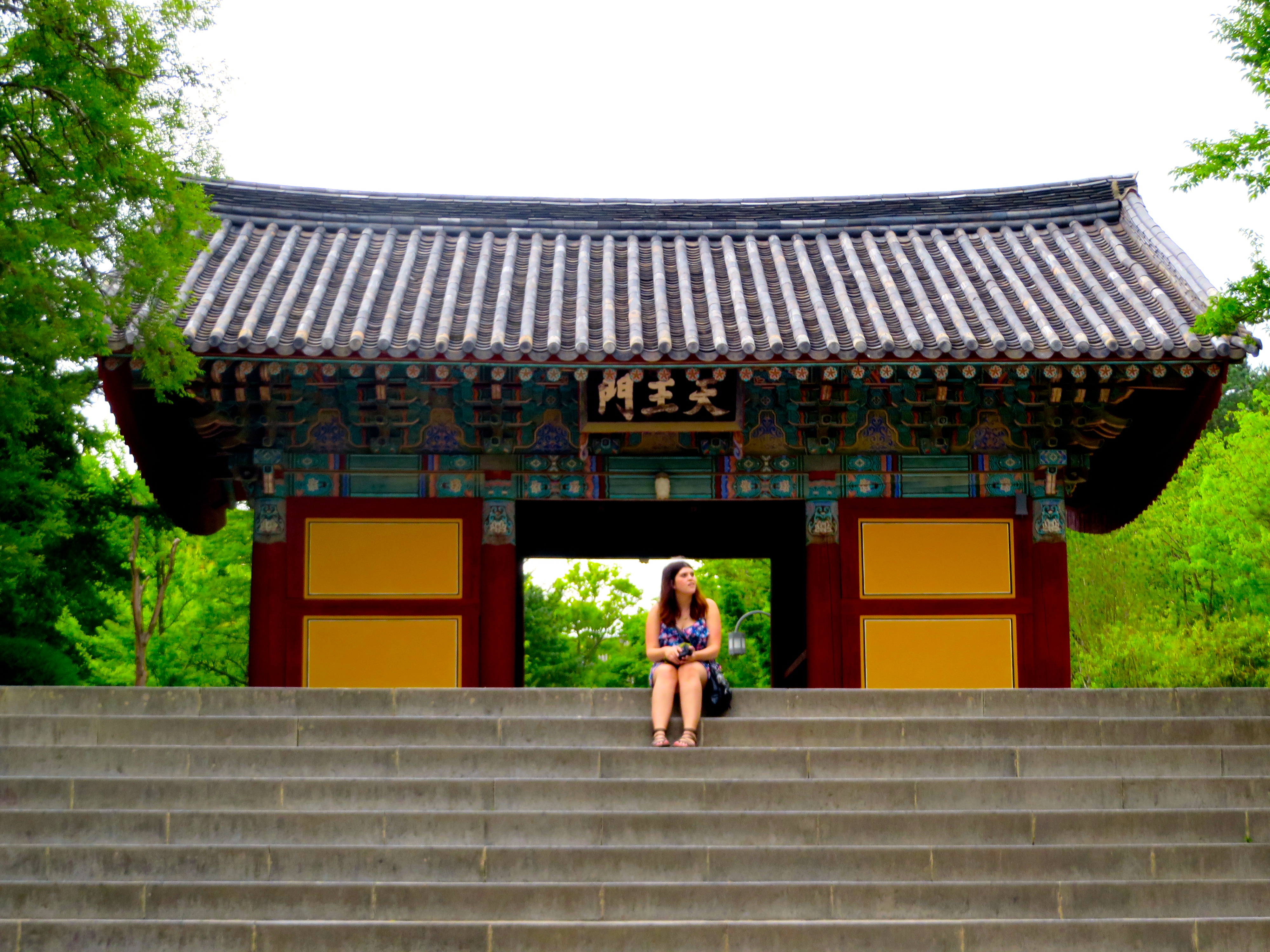 After almost a week in Seoul, I felt like I needed to get out of the hustle and bustle of the big city and explore another part of South Korea.

I chose Gyeongju mostly because of the amount of UNESCO sites surrounding it. I always take this as a great indicator of a magical place. Well I definitely wasn’t disappointed at all- my friend Sarah and I both saw some pretty amazing things in Gyeongju!

When we first got off the bus after a 4 hour ride from Seoul, our first impression of Gyeongju was that it was eerily quiet.

Our hotel was about 2 blocks from the bus station so it was quite an easy walk, but we hardly bumped into anyone. It was almost like we had just stepped foot into a ghost town.

The creepiness of Gyeongju wasn’t helped by the fact that the first motel we saw was a place advertising ‘sexy fun’ either. I really started to wonder what we had gotten ourselves into!

I seriously started to feel like we were in the middle of that bad horror movie where the murderous hotel owner lures poor unsuspecting foreigners in.

“We only worked out later that most of our wariness about the hotel might have stemmed from the fact that we had unknowingly checked into a love motel.”

I’m not sure what finally tipped us off; maybe it was the fem wash and razors they gave us at check in, the condoms provided just like any other hotel amenity, the statutes of couples embracing in the hallway, or the spa bath that flashed red and green lights when we turned it on.

Once we ventured out of the area directly adjacent to the bus station we realised that the local Gyeongju was still in business.

The tourist area we were staying in was deserted due to a lack of tourists, with the threat of MERS and bad weather keeping both domestic and international tourists away.

However there was much to love about Gyeongju!

Just as we were about to leave our motel to go exploring I realised that I had left my brand new Patagonia Torrentshell raincoat on the bus we took from Seoul. To say I was devastated and super mad at myself is an understatement!

I decided I had to at least try to get it back so I headed to the tourism office. Amazingly the women at the office were able to call the bus company who then put her in contact with the bus driver.

Apparently the bus driver had gone on to nearby Pohang, stopped for lunch and would be returning to Gyeongju in an hour, with my raincoat!

I’m not sure there are many places in the world other than South Korea where you can leave your belongings on public transport and actually get them back. I know this would be super difficult in Melbourne!

After the return of the missing raincoat, Gyeongju just kept getting better and better.

Needing a break from all of the Korean food, I found the best falafel I’ve ever had from a little stall across from the tourism office. The lady was also super nice and we spent lots of time chatting during the 3 visits we made to this place in our short 3 days in Gyeongju.

However the reason we had really come to Gyeongju was to see the amazing temples it is famous for.

Gyeongju’s first site to be declared a UNESCO site are the joint sites of Bulguska Temple and Seokguram Grotto.

Bulguska Temple is located about a 40 minutes bus ride from the centre of Gyeongju up in the mountains.

This was definitely the most beautiful temple that I saw in all of South Korea. We spent more than an hour walking around the temple and exploring the different buildings and scenery that the palace offered. The fact that its virtually built into the mountain made it even more beautiful!

We especially loved the water that run through it and the beautiful grounds, stairs and walls that could be found all around the complex.

Seokgurum Grotto is located higher up in the mountains, another 20 minute bus ride from Bulguska Temple. There is a little bit of a walk from the carpark to the Grotto, but this was beautiful itself not just because of the mountainous surroundings but also the cute little squirrels that ran across the path.

The Grotto is home to a 500 year old Buddha statue. For its preservation photographs are not allowed however it was definitely worth seeing.

The whole area around the Grotto is beautiful as well. I particularly loved the colours of these lanterns!

The second UNESCO site that Gyeongju had to offer us was Gyeongju National Park- a designated area home to many Buddhist relics.

Although some of the designated world heritage relics can be found in downtown Gyeongju we decided to take the more interesting path of Mt Namsan. You can find out more about our journey up the mountain and the amazing relics we came across, in this post.

On our final day in Gyeongju we headed out to the Yangdong Folk Village, another amazing UNESCO site.

This is the oldest village in all of South Korea, having been established in the 15th century.

There were so many ancient houses to explore that really gave us a feel for the age of this village.

However what we most cherished from this village was that there are still ancestors of the original founding family living there today. And everyday the people of Yangdong open their village and homes for tourists so that we might get a glimpse into their culture and their lives.

Yangdong was a place that reminded me of exactly what I love most about travel. Its not about ticking off countries, seeing every landmark possible or even visiting every place- travel is about the people as much as the place.

Gyeongju is truly a special place. Despite the fact that we had some very interesting and weird experiences in this mostly sleepy town- we did see some amazing temples, relics and houses and more importantly, we met some amazing people.