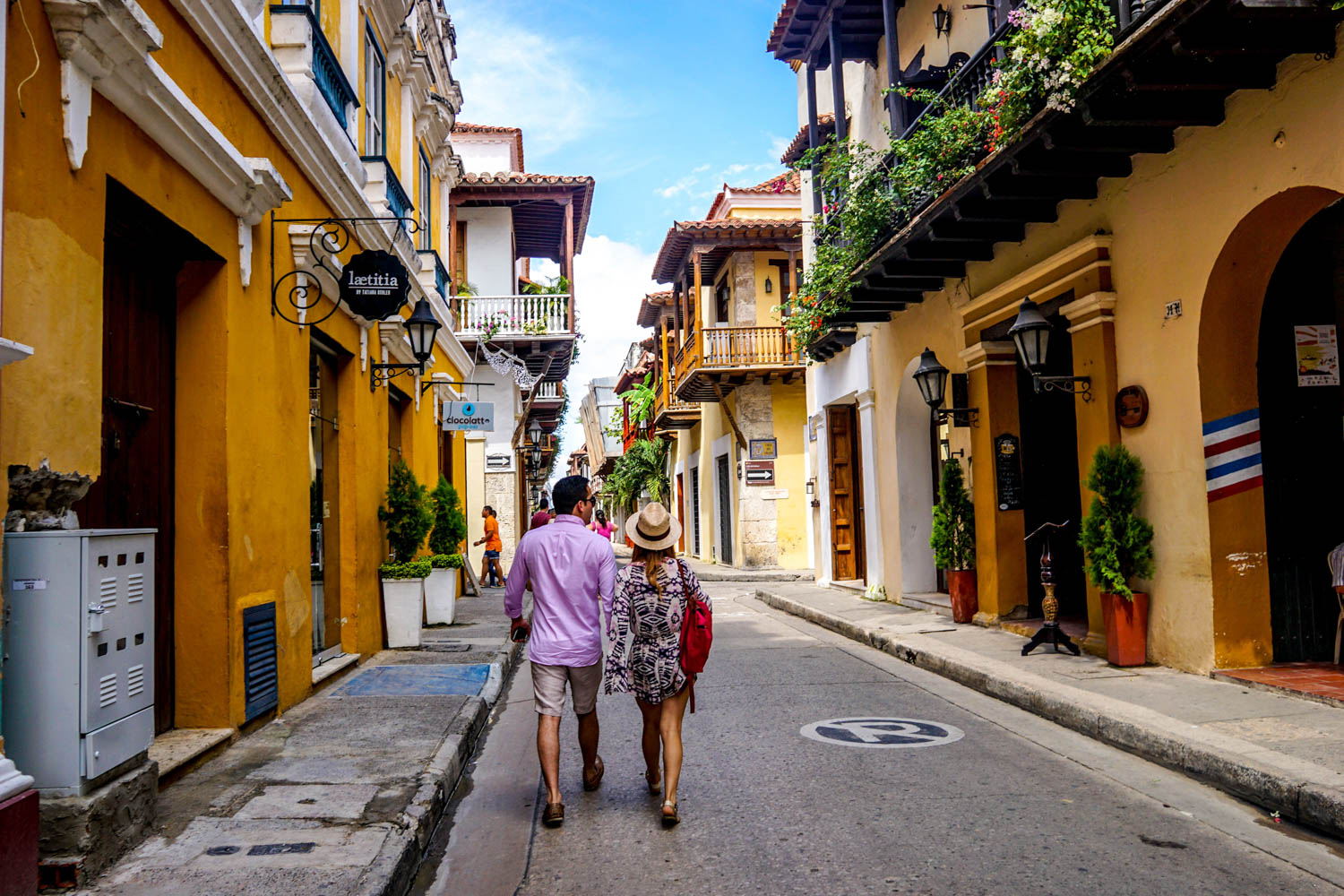 Cartagena was the most touristy place I visited in all of Colombia.

It was also my least favourite part of Colombia. Although that doesn’t mean I hate it- Colombia is such an incredible country that the standards are set high.  In fact, I had a great time in the city and I thought in terms of architecture, Cartagena was the most beautiful place I visited in Colombia. I wouldn’t have wanted to skip it!

But it was also stinking hot, and there are no easily accessible beaches. In fact, you really have to join a tour from your hostel in order to get to an extremely crowded, not very beautiful beach.

Hence my advice for Cartagena is that you don’t really need more than two days. That’s plenty of time to see what the city must offer. You could probably even do it in a day but you’ll want to spend the middle of the day inside with the air-conditioned. Two full days gave me plenty of time to explore in the morning and at dusk when it was slightly cooler.

Cartagena is also a great jumping off point to better places like Casa al Agua (I’m still kicking myself for not pre-booking this and thus not being able to go).  Or even to Panama via the San Blas islands.

The Old City of Cartagena

The thing that makes Cartagena such a beautiful destination is its old colonial architecture. In this way, the city reminded me a lot of Havana, although it was better preserved than most of the buildings I saw in Cuba. My friend and I got lost for hours just wandering around the city and stopping to snap photos of the beautiful and colourful buildings. I almost felt I was on a film set. Despite the heat, and the sweat dripping down my face, by wandering around I realised why so many people loved this city.

If you want to learn more about the history of the city, or just see the city in a more guided way than my random exploration then there are free walking tours. But after the huge tours I did in Bogota and Medellin, I was not keen on doing this in Cartagena. Especially because walking tours meant I wouldn’t be able to duck into air-conditioned shops for a cold drink or an ice-cream every half an hour.

After we had sufficiently wandered through the city, my friend and I decided to stop in the main square of the town. We were persuaded by the shady area that protected us from much of the heat, as well as the various street vendors with coolers full of ice cold beer. So we did as the locals do and sat on a park bench while listening to some street music and drinking some beer. It was also a perfect spot for people watching as hundreds of locals walked by or wandered into the square to escape the heat and find some shade, or to buy some lunch or a drink from one of the old Colombian ladies.

Once again, the pace, the heat and the sense of community reminded me a lot of Havana in Cuba. I think there might be something about the Caribbean and how it makes people friendly, smiley and just obviously, content with their existence. And I think it was those Caribbean vibes that I liked most about Cartagena.

I stayed at Mamallena Hostel in the district of Getsemani. It’s a short walk from the old town and was one of my favourite parts of Cartagena. The colour and vibrancy of the whole city still exists beyond the old city walls in Getsemani. The old town of Cartagena is immaculate and the buildings are kept in good repair. Getsemani in contrast felt a lot more real. The buildings seemed more lived in. Not to mention Getsemani is home to some awesome street art. We spent an afternoon wandering around and taking snaps of all the amazing pieces. Whilst it won’t ever be as good as Bogota, I loved the chaos and authenticity of the street art in Cartagena.

But Getsemani really comes alive at night. The area round the Getsemani church becomes a hive of activity as street food vendors sit up their stalls. People head to the vendor selling cocktails, or in to the corner store directly across from the church to buy some beers. Then everyone sits on the street, drinking, chatting and listening to some of the street musicians. I loved those nights in Cartagena.

If you are looking for a more organised party, one of the best nights to be out in Cartagena is Wednesday nights because of the huge party that occurs at Media Luna Hostel. It was located just across the road from Mamallena Hostel. Media Luna is usually a busy and popular hostel. It’s got a pool after all. But due to a huge problem with bed bugs the hostel was nowhere near capacity (word travels past on the backpacker trail in Colombia). I hope they have fixed it up because it looks like it could be a lot of fun.

Despite the lack of people staying at the hostel, the Wednesday night party was still packed full of people. Both locals and travellers head here and it is one of the greatest nights out in Cartagena. I especially loved chilling out and dancing on the rooftop. The water in all of Cartagena had been cut off for the day so we were all disgustingly sweaty for the party, but at least everyone was the same! It was a good night, even if all of us had to pull ourselves out of bed and head out on a shuttle bus to Santa Marta in the morning.

All the hostels offer variety of day trips from Cartagena. The most popular is the day trip to Playa Blanca and Rosario Islands. It was a pricey trip and didn’t come hugely recommended by those that had gone there already. So, I decided against it, especially because the only day we could go would have been the day the city had no water. I was not keen to come home salty and sandy from the beach and not be able to wash all that off. But if you are desperate for a beach it might be worth it for you!

The mud volcano is also another popular day trip. You basically go swimming in the mud of a volcano and then pay some old Colombian lady to wash it all off you in the river nearby. I’d heard it was very touristy and kind of gross. I’d also heard some horror stories about you basically having to get naked in the river with lots of creepy men around. Not something I was particularly keen on doing!

I flew into Cartagena from Medellin with VivaColombia. There are overnight buses as well. If you are coming from or planning on heading to Panama I’d absolute recommend the San Blas Island Tour. Everyone raves about it and it’s already on my bucket list for my big central America trip in a couple of years.

I stayed at Mamallena which was a great hostel with constant air-conditioning. It cost me 40000COP a night, which is about $17 AUD a night (Cartagena is the most expensive place I visited in Colombia).