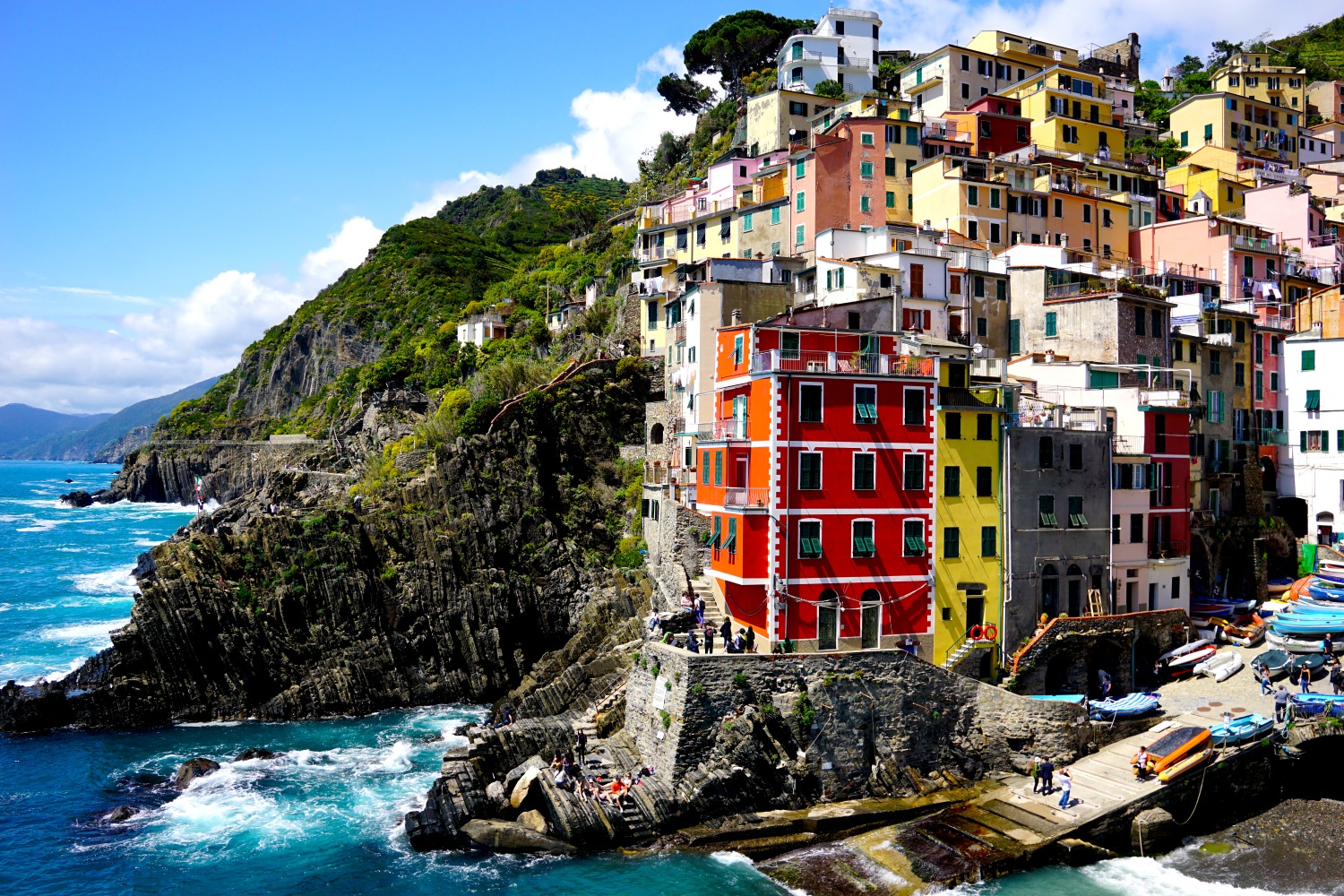 The Cinque Terre was notably my absolute favourite place in Italy. I thought it was better than the Amalfi Coast, better than Venice , Pisa, Florence , and any other of the cities on the well-beaten Italian tourist trail. I simply fell head-over-heels in love with with the five small towns that make up the Cinque (five) Terre.

The Cinque Terre is actually five towns along a coastline; Riomaggiore, Manarola, Corniglia, Vernaza and Monterosso. I also took a visit to the ‘sixth’ Cinque Terre of Porto Venere which like the five towns, is part of the UNESCO World Heritage Site.

So fitting with the theme of ‘cinque’ I thought I’d come up with five reasons why I love this place, which are also five reasons why you should pack your bags and visit. This list was hard- not because I couldn’t think of five things but I could think of many more!

What set the Cinque Terre apart from typical Italian architecture is the colourful buildings. Each town is made up of terraced houses that were built into the cliff face. It literally looks like someone has stacked a heap of colourful buildings on top of each other.

Actually that is pretty much what they did- the owner of our bed and breakfast told us that every year owners of the buildings and the towns need to throw a heap of money into the maintenance of the walls that form the puzzle that is the houses along the Cinque Terre.

But what makes them so beautiful is that they are all painted in pretty bright colours that don’t seem to match at all. You contrast those colours with the deep blue of the sea below and the green of the vineyards above and it doesn’t get much more picturesque than the Cinque Terre.

Whilst the standard hike is to walk between the five towns, there are so many different hiking trails that you can take around the Cinque Terre. When we were visiting the main coastal route between Riomaggiore and Corniglia was closed (the cliff face collapses a lot).

Instead we took a bus from Manarola to Volastra, a town up on the mountain. From there we walked along the beautiful wine terraces at the top of the cliffs and down to Corniglia.

The views were out of this world and you could even smell the grapes from the wine. But the highlight was catching locals tending the vineyards. Maintaining these vineyards is physical and difficult as everything must be carried on foot and the labour is still very manual.

After a quick bite to eat and a bit of exploring in Corniglia we continued on the main route to Vernaza. You have to buy to walk the main trails, but it’s not something I had an issue with as the money goes directly into maintaining the trails that deteriorate far more rapidly than they would have if tourists hadn’t discovered Cinque Terre.

This walk was far more difficult but the views were even more rewarding. We stopped for a drink at a bar along the trail- a traditional lemon granita made with local lemons. It was the perfect stop.

Given that the Cinque Terre is located directly on the coast it isn’t surprising that there is so much delicious seafood on offer. Even with our medium budget we were able to eat some delicious seafood, including fritto misto (mixed fried seafood) that came in a large cone for €8.

Cinque Terre was also where I ate the best meal of my time in Italy; a seafood spaghetti in which the seafood was cooked perfectly and the whole dish was seriously delicious. As a self confessed seafood addict, Cinque Terre was heaven!

My one regret of my visit to the Cinque Terre was that I didn’t take the opportunity to swim. I naively trusted the weather forecast, which is notoriously unrealiable for this part of Italy, and didn’t pack my bikini because it was meant to rain all weekend. In hindsight there were some days that were definitely warm enough for me to jump into the water that looked so inviting.

Instead I had to settle for gazing at the beautiful water and hearing the waves crash through the window as we slept in Riomaggiore. It was like having a relaxation tape on but actually the real thing.

We also got to experience the water on a very rough bus ride from Porto Venere to Monterosso. I wasn’t a huge fan of Monterosso- it was built up, touristy and missing the colourful houses, buildings and architecture typical of the towns.

For me Porto Venere is more worthy of being one of the ‘Cinque Terre’. This port town was just as beautiful as the others and an easy boat ride away.

The ferry ride would have also been better in calmer water as we would have pulled into all of the towns and been able to get an awesome view from the sea. It is something I recommend doing if the weather permits.

The Cinque Terre was home to the best sunsets I’ve seen since Ko Lanta in Thailand at the start of last year. Watching the sunset over Riomaggiore was simply magical- especially because of the combination of the colourful buildings and that crystal blue water.

We found a perfect spot and staked it out. I was quite content to sit there on the rock face (much to my mum’s dismay at my precarious position) and watch the sky change colour. All that was really missing was a nice bottle of wine.

To get to the Cinque Terre you’ll need to take a train from Florence or Pisa to La Spezia station and then hop on the Cinque Terre train line. It’s a local train so there is no need to prebook tickets. Just buy them when you arrive at the station. You can check the train timetable here.

All five towns are connected by a train that runs every half an hour. Unfortunately tickets are quite expensive- a one way journey between any of the towns (every the two minute ride between Riomaggiore and Manarola) costs €4 each. You can get a day ticket for €16 which might work out cheaper if you are rushing through the towns. But given we took our time exploring over the three days this daily deal never made any sense for us.

To get to Porto Venere you can catch a bus from La Spezia or the ferry from any of the towns (weather permitting). Sometimes if the weather is a bit rough (like the day we went) the ferry will only run between Monterosso and Porto Venere.

We decided to stay in Riomaggiore which was a really good decision. We were able to pick up a three-bedroom bed and breakfast overlooking the water which was about as authentic as you can get. The two nights cost us around €240 for three people.

Some people decide to do the Cinque Terre as a day trip but I would advice against this. Doing this trip in a day is super rushed and you won’t get to truly experience the Cinque Terre. Chances are you’ll be fighting the crowds of other day trippers, rushing through place to place and you’ll miss the sunset. The only people I know that didn’t enjoy the Cinque Terre only came for one day. For us three full days was the perfect amount of time.

What did you love about Cinque Terre?

If you have another reason to love Cinque Terre comment below! I’d love to hear your thoughts.

PIN IT FOR LATER: