What To Do in Dublin, A City After My Own Heart 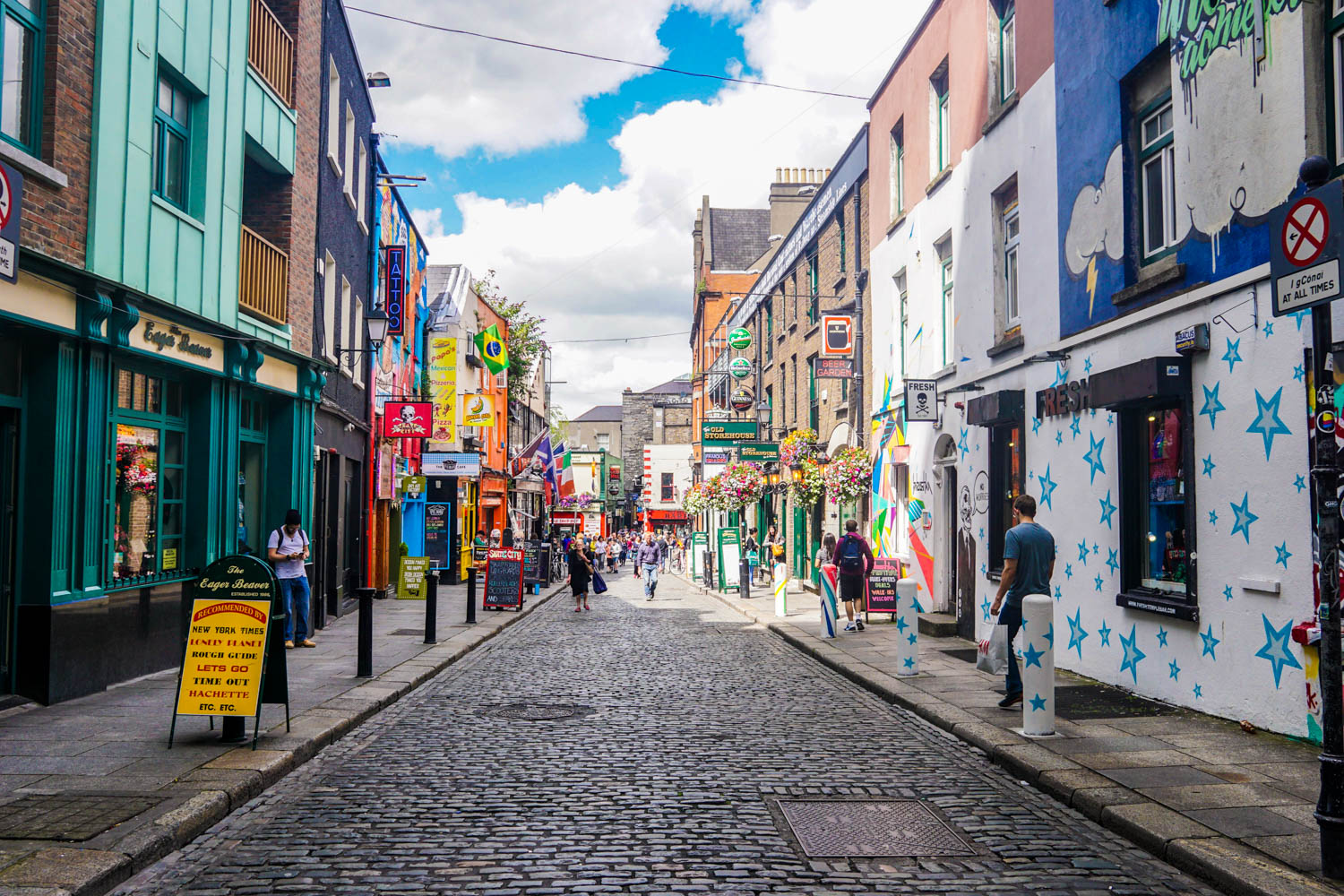 Before I even arrived in Ireland, I had a feeling that I was going to love it. Lots of books set on the Emerald Isle and an unhealthy obsession with PS I Love You meant that I had been dreaming about visiting Ireland since as long as I can remember.

It was one of the few destinations on my trip that was an absolute must. Luckily I managed to spend two weeks in Ireland, exploring almost every corner of the small country. But before I joined my Paddywagon Tour of the rest of Ireland, I began my trip in Dublin , the nation’s capital.

I landed in Dublin with excitement. Even the prospect of my nice Greek island tan fading under the Irish clouds couldn’t make me sad about the fact that I had arrived in a country that I felt like I had waited forever to visit. I was excited for live music, and Guinness and Irish accents.

Unfortunately my first experience of Irish accents was the Irish man at passport control who asked me a million questions. I have never been so grilled in my life at a border, and that’s counting entering the United States and the United Kingdom. He wanted to see the confirmation of my tour, he wanted to see my bank balance, he wanted to see the itinerary of my tour. It was also the only time during my whole trip in Europe that someone asked me about my French Working Holiday visa, that I was using to get around the 90 days in the Schengen zone rule.

Which I thought was pretty ironic, given I wasn’t leaving or entering a Schengen country. Finally I showed him my return flight and he promptly stamped my passport and I was on my way.

My first experience of Dublin started in Temple Bar. Contrary to many mistaken beliefs, Temple Bar isn’t actually a bar. It’s a district or area of Dublin that is home to many bars, museums and venues. It’s considered the cultural centre of the city. And I had booked the only hostel that was actually in Temple Bar; Barnacles.

Temple Bar gets a lot of heat for being a bit of a tourist trap. And it is true that most locals don’t venture further afield of Temple Bar in order to grab a drink. The fact is that beers in Temple Bar are expensive- sometimes double what you’ll pay in other parts of the city. But if there is one thing Temple Bar has going for it, then it’s the music.

Expensive beers mean bars in Temple Bar usually have a bigger budget for live music. Hence you’ll always find great music in the bars here. Also the sheer amount of people (yes usually tourists) in this part of the city means that it is a great spot for buskers to set up shop. I heard some truly magical street performers during my time in Temple Bar. In fact one lazy afternoon I sat on the top of my bunk with the window open and just listened to the amazing musician playing below.

Ireland is probably my second favourite country in Europe, losing the number one spot only to Portugal (that country will always hold a special place in my heart). And it’s a little strange I would put Ireland up that high. Yes it is amazingly beautiful but it’s cold- definitely not the sunny, beach, tropical type of destination that most of my favourite countries are.

But if I was going to pinpoint one reason that I loved Ireland so much than it was the culture of sitting in a pub, drinking a beer and listening to awesome live music. With a few exceptions, I’ve always been more of a bar and band girl, rather than a club and techno music type of person. Thus Dublin with its awesome live music scene was a city after my own heart.

It seemed wherever I popped into in Dublin, I’d come across a band or a musician covering some of my favourite songs in a truly talented way. Although hopefully I won’t stir up too much local rivalry by admitting that I saw the best cover band of my life in a little pub in Belfast.

While we are on the subject of beer, you can’t leave Dublin without visiting the home of Ireland’s most famous export; Guinness beer.

I don’t like Guinness. I tried so hard to give it a shot while in Ireland. After all I wasn’t the biggest fan of beer before arriving in Europe. But no matter I just couldn’t stomach it. I’m a lager fan- I like summer beers, especially wheat beers. A dark stout is basically the opposite of what my taste buds like.

But even if I couldn’t finish the free pint that is included in the entrance fee, I loved the Guinness Storehouse. It’s essentially a cultural experience, because this beer and the industry that it created form a huge part of the soul of Dublin. At the storehouse I loved hearing about how Guinness is made and the history of the beer and the man behind it. The advertising level was also awesome, I loved the retro ads and old memorabilia, including the famous Guinness harp.

But my favourite level was the sky bar. Located at the top of the factory, it offers the perfect view over the city below. Even trying to gulp down Guinness couldn’t ruin it.

I’m absolutely obsessed with the theatre, and ‘Once’ is one of my all time favourite musicals. I saw it in Melbourne with my grandparents and fell in love with the story and the music. So when I saw that it was on in Dublin, I knew that I had to go see it. Especially considering the story is set in the very city itself.

There was something special in seeing the musical performed in the city in which the original screenplay was written and set. And it did not disappoint, the male lead far surpassed the lead I saw in Australia. His voice was magical and I had more than little crush on him by the time the curtain fell.

As you’ll probably know my now, I’m a huge fan of free walking tours. I love to do them on the first day in a city as it gives me an outlay of the city, I almost always get good food recommendations from the tour guide and it gives me time to return back to places I might want to see again or linger at longer.

We visited the Castle and the nearby Dubh Linn gardens. We managed to snag one of Dublin’s rare sunny days for the tours and thus the walk in the gardens was probably the highlight of the whole tour for me. I would love to return in the spring when everything is in bloom!

We stopped by the formidable Christchurch Cathedral that has an interesting history. It’s not often you stumble upon a cathedral that once housed a pub, opium house and a brothel. Being on the walking tour, we didn’t have a chance to go inside and I never got back to do it myself. But I’ve heard the view from the bell tower is very magical!

We heard stories about the Irish revolution as we walked down the River Liffey, and we learnt about Dublin’s most distant past when we stumbled upon an outline of the Viking village that was uncovered near the Christchurch Cathedral (unfortunately the City of Dublin then decided to build a bunch of local government buildings on what is undoubtedly a rich archaeological site).

The tour ended at Trinity College, which from an historical standpoint is my favourite place in all of Dublin.

The college is beautiful and I loved passing some time after the tour in the courtyard. It seemed everywhere I turned around I found gorgeous buildings. I was going crazy with my camera. But the real reason Trinity College is one of my favourite spots is because of books, of course.

The library at Trinity College is still the most beautiful library I’ve ever seen. And I’ve made a point of visiting many libraries and bookshops on my travels. As a self-professed book lover, whose only desire to be a homeowner lies in the ability to build a majestic library, I went crazy for the beautiful old shelves and stacks upon stacks of very old books.

The Trinity College Library is also home to a pretty incredible piece of history; the Book of Kells. It’s a handwritten manuscript of the Gospel that is dated somewhere between the 6th and 9th century AD. It’s surely the oldest book I’ve ever laid my eyes on.

Given the need to preserve this treasure, only two pages are on show at Trinity College, both of which give a great indication of why the Book of Kells is such an amazing representation of the history of calligraphy and illustration. It’s a far cry from the mass market paperback.

Why I Need to Return to Dublin

I counted on having an extra day in Dublin to explore. I booked a late flight out to Edinburgh after my Paddywagon tour in order to give myself another day to catch the things in Dublin I would have missed. But after 11 days of non-stop travel on my tour I had absolutely no energy to explore. Sitting in a bar with a cider and another awesome musician seemed like a nicer way to spend my last day in Ireland rather than running from one museum to another.

But there are a few things I missed this time around that are definitely on my list for next time. The Chester Beaty Museum is meant to be phenomenal and I was very sad to have missed the Dublin Writers Museum. If I had another night I’d also probably have signed up for the Literary Pub Crawl.

Oh well, it gives me a great excuse to return to Dublin. Not that I needed one!