Journey to Bulgaria: What to Do in Veliko Tarnovo 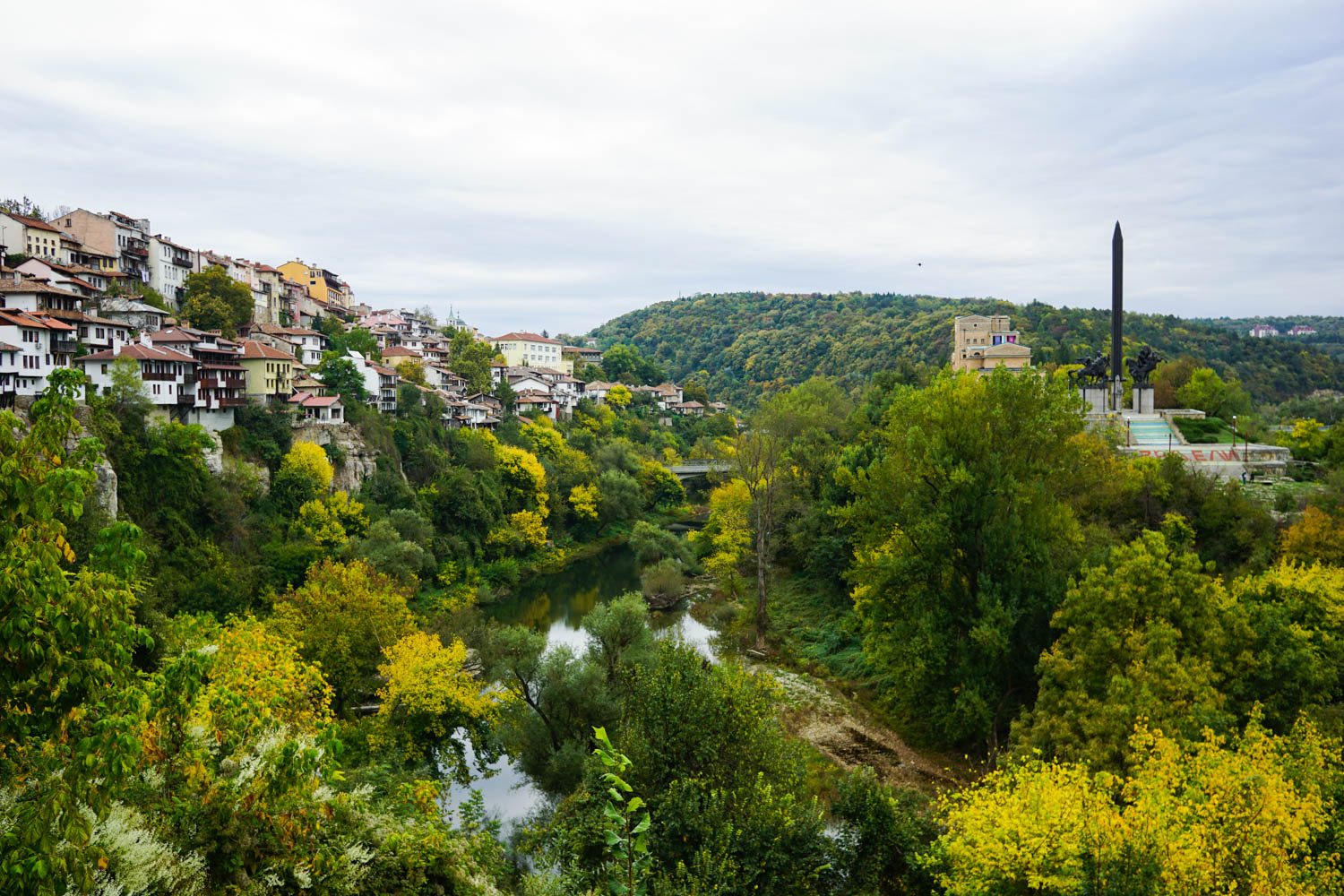 Bulgaria isn’t a country that people typically add to their European itinerary. But I think I’ve already established that I’m addicted to discovering and exploring the more unexplored parts of Europe. It is one of the reasons why Eastern Europe is my favourite region of the continent.

My first stop in Bulgaria was the city of Veliko Tarnovo.  I’ve said this before about a lot of cities, but when it comes to Veliko Tarnovo I’m being absolutely truthful. Veliko Tarnovo is one of the most unique, crazy and quirky places I’ve ever visited.

We arrived at night after a long train ride from Bucharest but even taking the bus to the hostel in the dark, it was clear that Veliko Tarnovo was different. I’d felt like I’d stepped in a time machine and travelled back to medieval days. I can just imagine someone riding a horse over that hill to get their first glimpse of the city below.

Instead of the grid pattern of most European cities, Veliko Tarnovo is built in and around a series of hills and a river. Whenever I was walking through the city I felt like there was an immense world existing above me and another world existing below me. It messes with your spacial awareness a lot (not that I had much to begin with really).

It is for these reasons that I think that if you are only going to visit one place in Bulgaria then it should be Veliko Tarnovo. The train from Bucharest is ridiculously and unnecessarily long considering the distance but it isn’t too terribly out of the way if you have made the Balkans your destination to begin with.

So what is there to do in Veliko Tarnovo? It’s not a huge city with a lot going on, but there is definitely enough to fill three days of exploring. Especially if you account for a day trip to the nearby and incredible Budzludzha. But you could squeeze it in two days if you are short on time and have a more fast paced style of travel.

Start with a Walking Tour

Because of the strange way that Veliko Tarnovo was built it can be a little hard to navigate your way around. Just getting from the bus stop to the hostel required us to ask at least two people for directions because it was so confusing. Hence it is a good idea to start your exploration of Veliko with a walking tour.

For me it was a great way to see parts of the city that might otherwise have remained lost in the maze of streets. It also provided so much history on Bulgaria and the city itself which was super interesting given that I knew absolutely nothing beforehand.

The tour took us to the main sites of the city as we learnt about the history of Veliko. I don’t want to spoil anything by going into the details but basically it involved a lot of conquering and a lot of conflict between religions, particularly Christians and Muslims. It reads much like the history of many countries through Europe but the medieval aspects for me were most interesting given that Veliko Tarnovo doesn’t look like it has changed at all.

Make Time for the Street Art

Before I got to Bulgaria, a friend at my hostel in Romania had raved about Veliko Tarnovo. In particular she said she absolutely fell in love with the street art throughout the city. Whilst we were shown some on our walking tour, I went out to explore further in order to hunt out some great pieces.

Some of the best street art in Veliko can be attributed to the Bulgarian street artist; Mouse. Her street art is fantastic- I especially loved her works that are a commentary on the corruption of the press in Bulgaria. There is also some great street art from Mouse and other artists protesting the heavy penalties for cannabis use that still exist in the country.

Food isn’t what immediately comes to mind when you think about travelling through Bulgaria. Well at least it wasn’t for me. But Veliko Tarnovo is home to the best restaurant I ate at during my whole time in the Balkans and Eastern Europe.

Shtastlivetsa isn’t the cheapest meal you’ll have in Eastern Europe. But the value is totally worth it. I had grilled chicken with lemon butter sauce and grilled haloumi which was seriously to die for. I also shared some cheesy risotto and some mish-mash (a kind of Bulgarian omelette made with eggs, cheese, tomatoes, onions and bell peppers). The mish-mash was actually incredible and the best Bulgarian dish I found!

It would be really regrettable if you didn’t eat here at least once. It’s also got an incredible view onto the town and the river below and it’s a really nice, quaint restaurant.

Veliko Tarnovo and Bulgaria attracts hundreds of archaeologists every year because of the amazing ruins and archaeological sites that can be found towering on the hills surrounding the city. One of the very first sites ever excavated in the city was the Fortress which still towers over the whole city.

Even the fact that we arrived at the fortress just in time for the rain to set in didn’t stop us from being wowed by this incredible site. It’s faced a hell of a lot of destruction during all those conflicts and crusades. So the fact that it is still mostly intact is a big win for history lovers like myself.

Make a Day Trip to the Budzludzha

Almost everyone in my hostel rounded some people together and hired a car for the day so they could go visit the Budzludzha, a communist monument that looks like a UFO.

My friend and I were going to do the same before we headed off to Sofia but we conveniently found some British guys with a hire car who let us hitch a ride for some petrol money. Luckily they were going to Sofia via the Budzludzha- so we managed to save a lot of time and money.

This is one of those quirky tourist destinations that seems to be particularly popular with backpackers looking for something unique and different. This UFO was built by the Communists on a peak in the Central Balkan Mountains. It really is a sight to behold, especially since it has been repurposed by street artists and visitors alike.

It used to be pretty easy to get inside the UFO itself which is apparently lots of fun to explore. But due to safety concerns it had been bordered up ridiculously tight for the day of our visit. I bumped into people a couple of weeks later that had luckily made it inside- someone had smashed a window and built a shitty ladder.

Just be aware that if you can get in on the day you are there you are breaking Bulgarian law and you are putting your safety at risk. Apparently the whole reason it was boarded up tight in the first place was because the roof is ridiculously unstable.

Even if I couldn’t go inside, it was one of the highlights of my trip to Bulgaria. It’s super cool!

Where Should I Stay in Veliko Tarnovo?

If you are a budget traveller or are just looking to make some friends, I recommend staying at a hostel. In Veliko Tarnovo every backpacker seems to stay at Hostel Mostel and I’d recommend it.

I stayed at Hostel Mostel which is the main hostel in the city. Chances are you’ll bump into travellers on the train or bus to the city who are staying at the exact same hostel. There is one train a day from Bucharest to Veliko Tarnovo, although you do have to make a short stop in a nearby city. Don’t worry about the connections- even where the train is delayed the connection will wait for you. The easiest way to travel to other parts of Bulgaria such as Sofia from Veliko Tarnovo is definitely by bus. The train station and some buses are located on the outskirts of the city, and the train station at least is not manned with someone who can call you a taxi. Do not accept a ride from the dodgy fellows lurking out the front of the train station. The easiest way for us to get into town was by bus although you’ll need Bulgarian currency to do so (luckily for us I had been given a little by a friend in Romania).